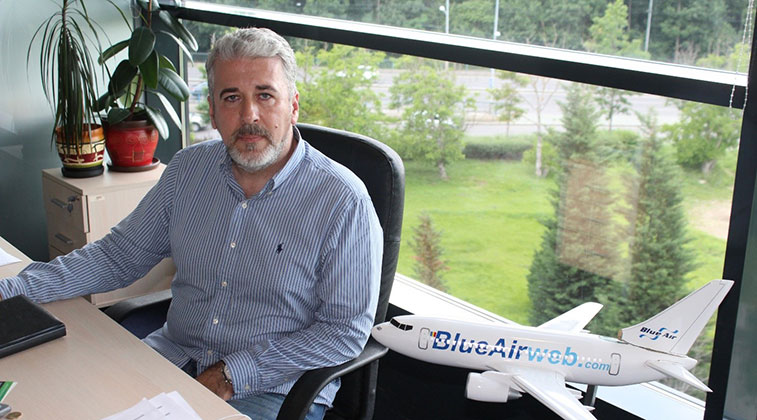 Sitting proud as his desk in Bucharest is Blue Air’s Revenue Management & Planning Director George Rizica. The reason Rizica can feel proud is that during the past 12 months, Blue Air has nearly doubled in size, with weekly seat capacity growing by 43% this summer when compared to last year.

During the past 12 months, Blue Air has added the following airports to its network: Alghero, Berlin Tegel, Birmingham, Castellon, Cluj-Napoca, Glasgow, Hamburg, Iasi, Lamezia, Lisbon, Lyon, Menorca, Palma de Mallorca and Stockholm Arlanda, with anna.aero having been on the airline’s first flight to Castellon. The airline has gone through a major expansion during the past year, with it having increased its weekly seat capacity by 43%. Last month anna.aero’s Assistant Editor Jonathan Ford paid a visit to Bucharest to meet up with Blue Air’s Revenue Management & Planning Director George Rizica. The main aims on Ford’s agenda were to find out why the airline has expanded so rapidly during the past 12 months, and to see what is in store for the airline next year.

With Blue Air expanding its weekly seat capacity by 43% during the past 12 months, it seems surprising that an airline which has been operating for nearly 12 years has decided to nearly double its size within 12 months. Wizz Air and Ryanair have also expanded rapidly from Romania during the past year, with the latter carrier expecting to open its first bases in the country at the start of W16/17, one in Bucharest and the other in Timisoara. The first question that Ford put to Rizica was: “Do you see Wizz Air’s and Ryanair’s expansion in Romania as a threat?” Rizica responded: “Their expansion in Romania has made us more competitive, and also pushed us to find innovative solutions to adjust to the new conditions of the market. The Romanian market has big potential, and all three of us can grow a lot.”

As well as its Romanian bases, the airline has two international ones, Turin and Larnaca. Ford questioned Rizica on why Larnaca became an attractive base location, and if Cyprus Airways’ demise helped speed up the process. “We were considering this for a long time, but Cyprus Airways’ closure sped-up the decision. We constantly analyse all options available when establishing a foreign base, and we do take actions almost immediately when we feel the potential for development is there.” When Ford asked where Blue Air’s next foreign base would be, Rizica stated that it was looking at a variety of potential options, but Western Europe was a high possibility. However, when pushed for a more definitive answer, Rizica kept his cards close to his chest.

As already stated, Blue Air has increased its weekly seat capacity by 43%, and this has not come from the carrier’s existing fleet. During the past 12 months, the airline has nearly doubled its fleet, with it now having a mixed fleet of 28 737s. With this expansion, Ford asked to see if the airline was considering ordering brand new aircraft, with Rizica stating: “Blue Air has invested significantly in its fleet, and starting this summer the airline has nearly doubled the number of aircraft it has, reaching a total of 28 units. Out of these, no less than seven are NG versions of the 737 family. To answer your question, it is a bit early to consider ordering new aircraft, as we are looking to consolidate our fleet this year first. Nevertheless, our intention is to keep growing our operations and subsequently our fleet every year from now on.”

Of the 14 airports which have joined Blue Air’s route map during the past 12 months, the largest of those is Iasi (highlighted in light green). Launched in October, the carrier now serves a total of seven destinations from the northern Romanian airport with 28 weekly flights, namely to Barcelona, Brussels, Bucharest, Cologne Bonn, London Luton, Paris Beauvais and Rome Fiumicino. As a result of this expansion, Iasi is now the sixth largest airport on Blue Air’s network. 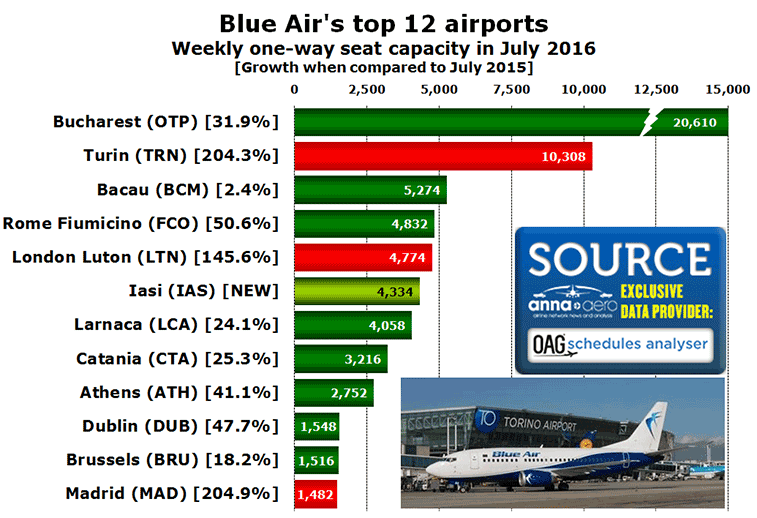 The existing airport which has seen the biggest expansion from Blue Air is Madrid, with weekly seat capacity to the Spanish capital growing 205% when compared to last summer. During the past 12 months the airline has added services from Bacau and Turin to Madrid, adding to its existing Bucharest service. As a result, the airline has increased its weekly flights to Spain’s largest airport from three to nine.

Inside the airline’s top 12 airports, three have seen a triple-digit growth in seat capacity (highlighted in red). Of those, Madrid and Turin have seen a +200% rise in weekly seats, while Luton has seen capacity grow by nearly 146%. Outside of the top 12, one other airport has also achieved this feat – Constanta. Capacity to the East Romanian airport has risen by 104%, and on 4 June the airline opened up a link between the airport and Athens, adding to its existing Milan/Bergamo connection. 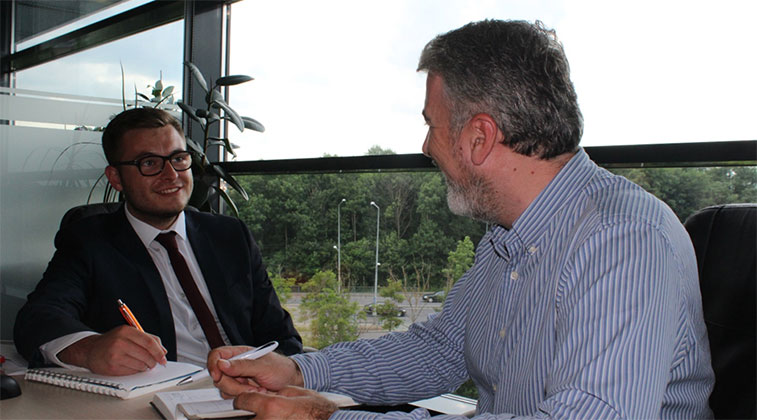 What does Blue Air look for in a new airport?

With Blue Air having launched flights to 14 new destinations in the past year, one of the key questions that Ford wanted to know was: “What does Blue Air look for in an airport it is thinking of serving?” In response, Rizica stated: “The main criteria for selecting potential and unserved destinations is based on traffic forecast figures, and also the commitment the airport team is ready to put in. Launching a new route is a challenge and therefore we need maximum involvement of all stakeholders. Moreover, we are also looking for a meaningful demographic size within the destination’s catchment area, as well as a manageable distance of the actual airport pair.”

At the start of S16, Blue Air commenced service to Hamburg from Bucharest, the number one unserved route from Romania to Europe last year according to OAG Traffic Analyser data. Around 14,000 people travelled between the Romania capital and German gateway via another European city one-way in 2015. This route opening confirms Rizica’s statement of Blue Air looking for new route opportunities based on traffic forecast figures.

Iasi and Lisbon break into top 12 for ASKs

Looking at the airline’s top 12 routes in relation to ASKs, the number one is between Bucharest and London Luton, a sector served by the carrier 10 times weekly. Of the airline’s top ASK routes, two are new connections to Blue Air’s route map (highlighted in light green), with Iasi to Luton, and Bucharest to Lisbon joining the top 12. At 2,971 kilometres, the connection between the Romanian and Portuguese capitals is the second longest route for the LCC after Luton – Larnaca. With this, it is no surprise to see this thrice-weekly served city pair entering the top 12 ASK routes. Iasi to Luton is the 17th largest sector in relation to distance. At 2,071 kilometres, the five times weekly link to London’s fourth largest airport sits between two other connections to the UK airport in relation to distance, with Bucharest – Luton being 16th, and Bacau – Luton 18th. Looking at the airline’s top 12 routes in relation to ASKs, Larnaca – Luton (sixth largest) is also a new route which launched 25 April, however both airports have been served by Blue Air for more than 12 months from other destinations. 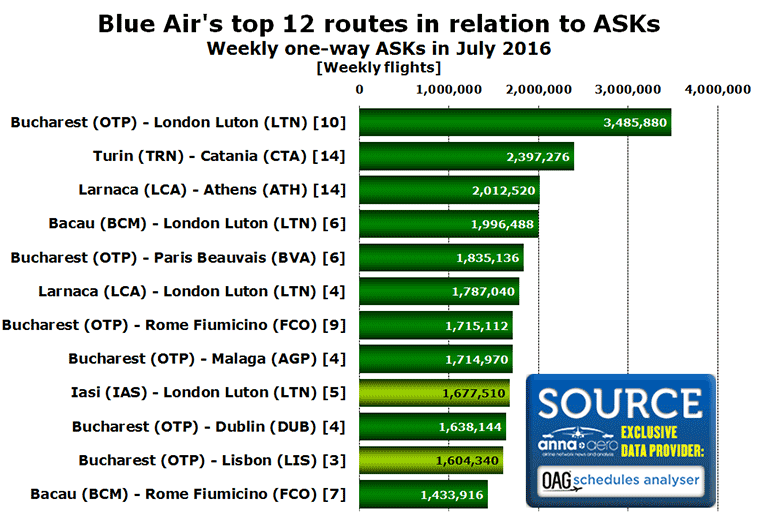 OAG Schedules Analyser data currently shows that Blue Air operates 546 weekly flights, with the average sector length for the carrier being 1,419 kilometres. Based on the airline having such a high average sector length for an LCC, it raised the question of “What is the average flying time for a Blue Air aircraft?” In response to Ford, Rizica highlighted that the average weekly flying time for the airline’s 737 fleet is 94 hours.

The next major development on Blue Air’s ever expanding route map is the opening of non-capital Romanian domestic links. On 1 October, the airline will open flights between Iasi and Cluj-Napoca, with the airline linking the latter to Timisoara on the same day. This makes the LCC the first airline to open non-capital domestic connections in Romania. A link between Timisoara and Iasi is planned to launch on 2 October. All three routes are expected to be operated daily. When asked about how the ticket sales were performing on these connections by Ford, Rizica stated: “These services have been welcomed by very warmly by those wanting them, and ticket sales are proving this. We are very happy with how they are selling.” As well as these launches at the start of W16/17, the airline will also link Turin to Pescara from 1 October, while on 17 December the carrier will open up a link between Cluj-Napoca and Birmingham. However, with the airline’s plans to expand much more rapidly going forward than in previous years, we could see a lot of new routes being opened by Blue Air in S17. 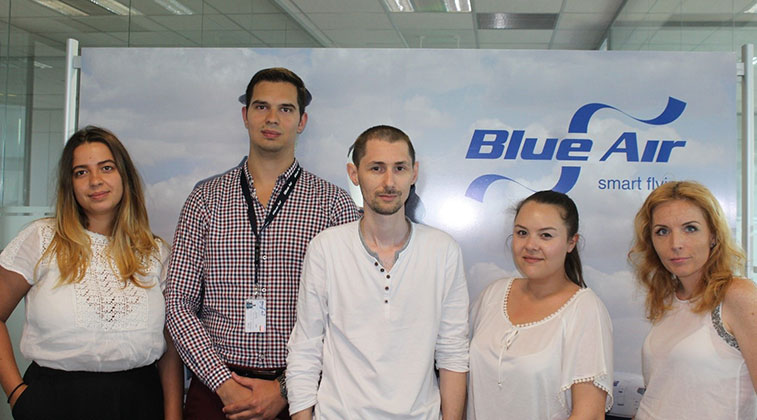 Blue Air’s S16 route map. Since last summer, the carrier has welcomed the following airports to its network: Alghero, Berlin Tegel, Birmingham, Castellon, Cluj-Napoca, Glasgow, Hamburg, Iasi, Lamezia, Lisbon, Lyon, Menorca, Palma de Mallorca and Stockholm Arlanda. Since 2014, the airline has opened up 41 new routes, with the airline now serving 46 airports in Europe. The next step for the carrier is to launch non-capital Romanian domestic routes, with the airline planning to link Iasi to Timisoara and Cluj-Napoca, with the latter two to also be connected from W16/17. Blue Air will be the only airline operating non-capital Romanian domestic links.