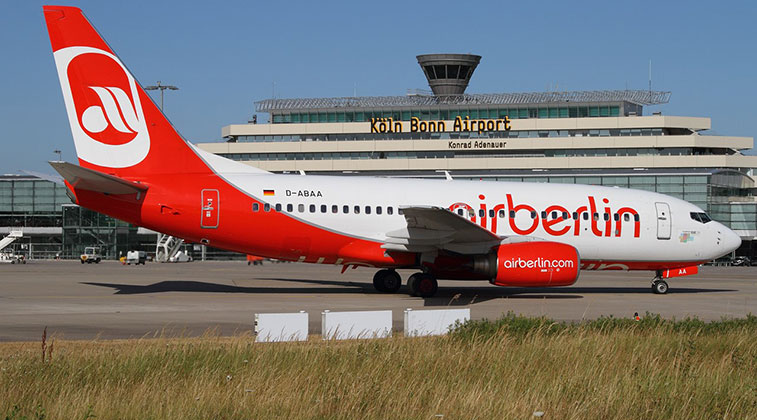 Last Saturday airberlin resumed flights from Cologne Bonn to Thessaloniki in Greece for a brief season of flights, bringing the number of destinations it serves from the German airport this summer to 15. Germany’s second biggest airline, which continues to focus heavily on leisure flights (primarily to airports in and around the Mediterranean) has had a constantly varying network from Cologne Bonn which is located just 55 kilometres from its second biggest hub at Düsseldorf.

According to our analysis using OAG Schedules Analyser, between 2006 and 2016 airberlin has served a total of 57 destinations from Cologne Bonn. The most destinations served at any one time was during the summer of 2010 when the oneworld carrier connected Cologne Bonn with 39 destinations. The highest number of weekly flights was during the previous season (W09) when it operated 225 weekly departures from the German airport. 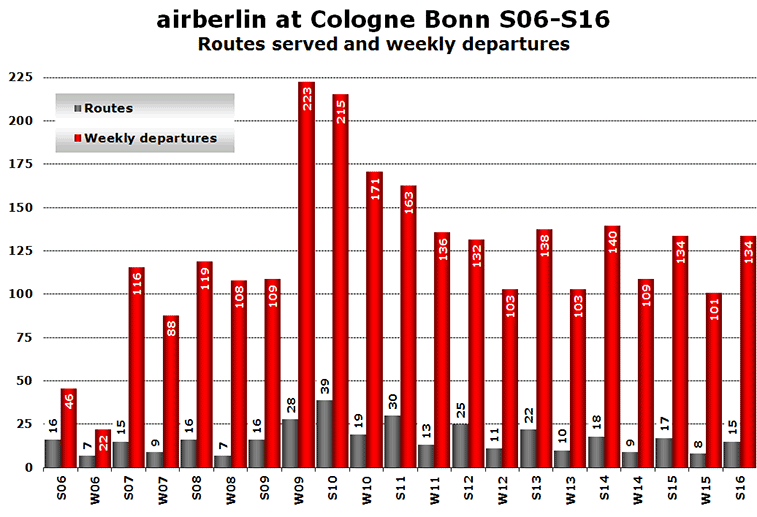 Source: OAG Schedules Analyser for first week of February (Winter) and August (summer) in each year.

The decision to launch domestic flights from its bases at Berlin Tegel and Munich to Cologne/Bonn on 1 May 2007 saw the carrier more than double the number of flights it operated at the airport that summer. November 2009 saw the biggest increase in new destinations with a total of 16 new routes being launched with a further four starting in December 2009. Another nine routes were started during the summer 2010 season. Disconcertingly, of the 29 routes launched during that hectic period just two are still being operated this year; Olbia and Tel Aviv.

CGN is airberlin’s #8 airport; three routes account for 83% of flights

This summer Cologne Bonn ranks as airberlin’s eighth busiest airport (and sixth busiest in Germany) offering some 720,000 departing seats across its network of 15 routes. Of the 134 weekly departures during the first week of August, 111 are to just three destinations: Berlin Tegel (42 weekly departures), Palma de Mallorca (41) and Munich (28). The remaining 23 weekly departures are spread across 12 additional airports. 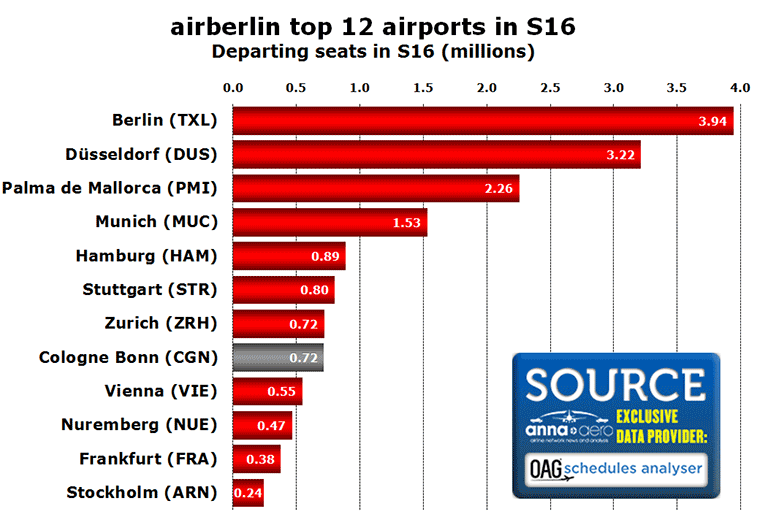 Cologne Bonn is a major base for germanwings/Eurowings which accounts for around 43% of the airport’s scheduled seat capacity this summer. Ryanair comes second with 17% of capacity followed by airberlin with 14% and Lufthansa with just over 5%. On airberlin’s three key routes to Berlin, Munich and Palma de Mallorca the airline faces competition from:

With Lufthansa having now handed over all of its non-hub feeding routes at Düsseldorf to its own in-house LCC germanwings/Eurowings, airberlin seems likely to be focussing any growth in that region of Germany to its major base there rather than trying to grow at Cologne Bonn. Between 2006 and 2016 airberlin has served a total of almost 60 destinations from Cologne Bonn with non-stop flights. However, the number of destinations served in 2016 alone is just 17, most of which are in the Canary Islands or around the Mediterranean.