Copa Airlines nearly quadruples in size from Panama City since 2006; six routes gained and two dropped in past year 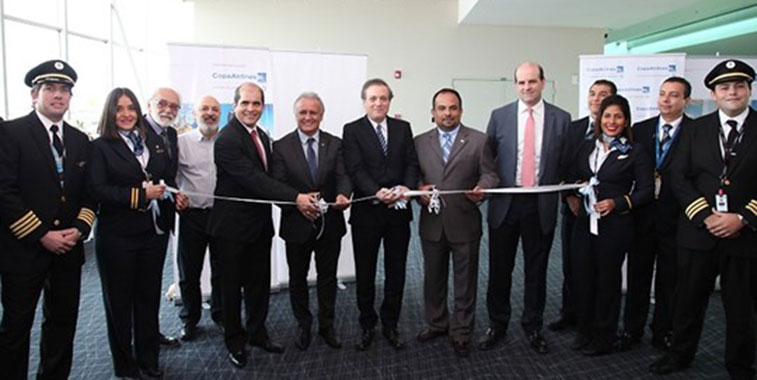 One of the latest route launches by Copa Airlines from Panama City was to Rosario in Argentina on 1 July. Rosario is one of six new destinations that the Star Alliance member has linked Panama’s capital city to during the past 12 months, including Belize City, Chiclayo, Holguin, San Francisco and Villahermosa.

Copa Airlines was founded in 1947 as the national airline of Panama. It began operations with domestic flights to three cities in Panama on Douglas DC-3/C47s. By 1966, the airline boasted thrice-weekly flights to San Jose in Costa Rica, which was its first international destination. Today the airline operates to 74 destinations from its Panama City base, all of which are served by the Star Alliance member’s now +100-aircraft fleet, made up of 23 E190s, 14 737-700s and 64 737-800s according to ch-aviation.

Looking back at the past decade of the Star Alliance member’s operations from Panama City, one thing is quite evident, the scale of its expansion from the airport. Since 2006, Copa’s capacity from Panama City has increased by 292%, nearly quadrupling its operation. Within that time the airline has grown the total number of destinations its serves from Panama City from 33 to 74, a net increase of 41. The biggest year for growth was 2011, when the airline increased its seat offering by nearly 26%. This followed the only year in which the airline reduced its capacity from the airport, down 1.9% in 2010 (highlighted in light green) when compared to 2009. 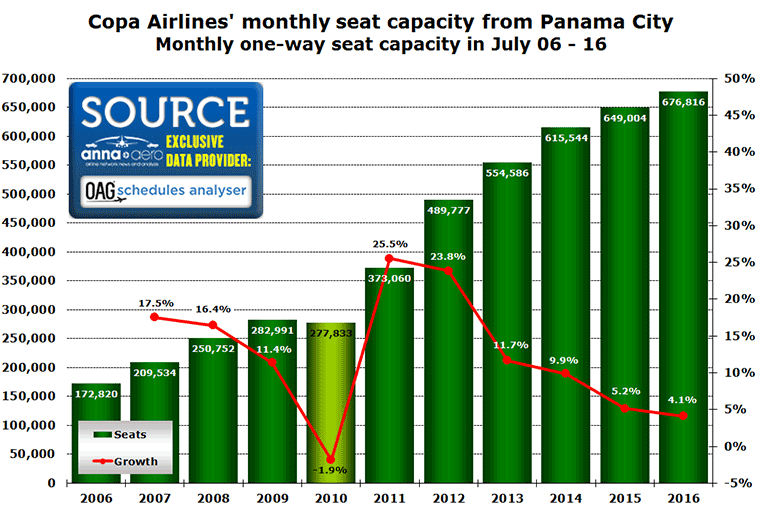 Source: OAG Schedules Analyser data for July of each year.

During the period between 2009 and 2010 no routes were dropped, in fact during 2010 the airline added a connection from Panama City to St. Maarten, a route launched on 12 December of that year. Of the 45 routes operated by Copa from Panama City during 2010, 25 witnessed reductions in seat capacity, with Port au Prince (down 34%), Kingston (33%) and Santa Cruz (31%) being the three destinations to see the biggest cuts. However, it was not all doom and gloom that year, as some destinations welcomed increases in capacity, with Los Angeles being the prime beneficiary, seeing a 33% rise in seats.

During the past year, Copa has added the following six destinations to its route map from Panama City: Belize City, Chiclayo, Holguin, Rosario, San Francisco and Villahermosa. Within the same 12-month period, the Star Alliance member has dropped routes from Panama’s capital to Iquitos and Sao Paulo Viracopos. It should also be noted that during the past 12 months Copa has also commenced and ended service to Puebla from Panama City.

Looking at the airline’s top 12 routes from Panama City in S16 compared to S15, only one has been knocked from the list, with Orlando dropping from ninth to 14th, a result of a 27% decrease in seat capacity to the Floridian airport. Replacing Orlando in the top 12 is Guayaquil (up from 14th), a route which has witnessed a 20% growth in seat capacity. 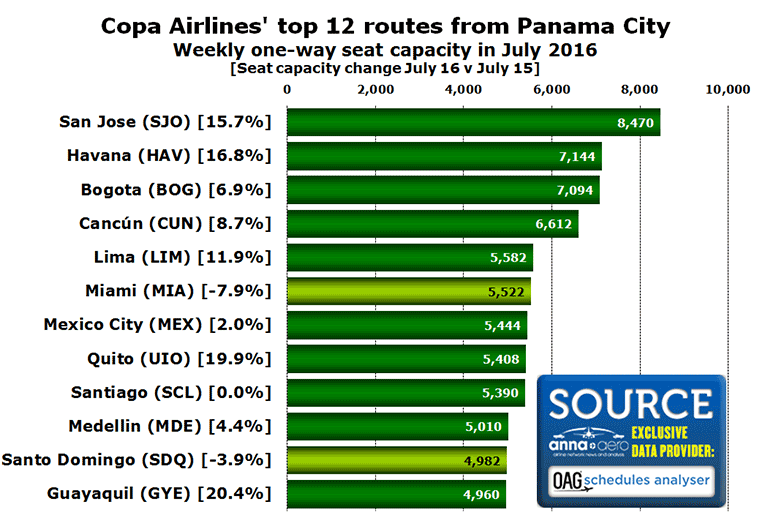 Of the carriers top 12 routes from Panama City, two have witnessed a drop in seat availability (both highlighted in light green), with Miami down 7.9% and Santo Domingo 3.9%. The star performer of the top 12 however is Havana, which has climbed from fifth in 2015 to second this year, helped by a near 17% increase in weekly seats. As well as Orlando and Miami seeing slumps in seats, another two US destinations have also felt a seat cull. Los Angeles and New York JFK (joint 18th largest routes) have both experienced capacity drops, with the former shrinking by 19% and the latter down 2.2%. It should be noted that not all US routes have seen capacity cuts, with Washington Dulles (23rd) having an increase of 5.3%.

Around 160 arrivals and departures each day in S16

With a focus on connecting traffic, as well as local point-to-point traffic, the airline operates a number of distinct waves at its home airport. The following graph shows the number of arrivals and departures for Copa during each hour on the first Monday of August 2016. The airline has five main departure waves throughout the day which see at least 20 departures an hour. In relation to arrivals, there are four main waves, with the largest being between 21:00 and 21:59. 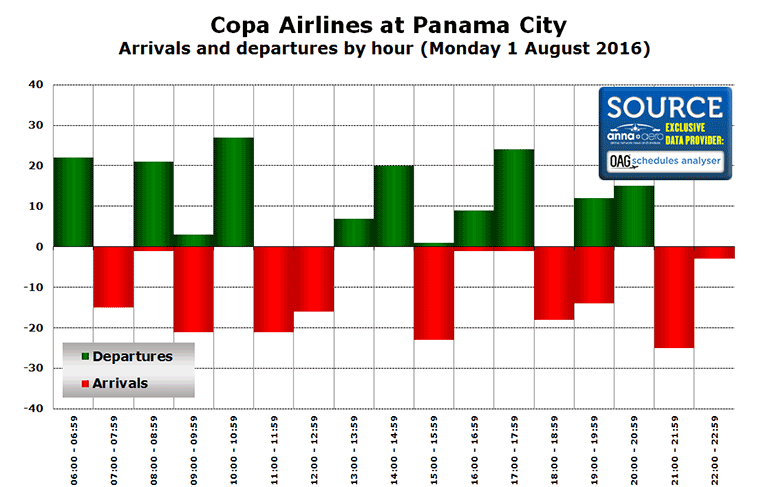