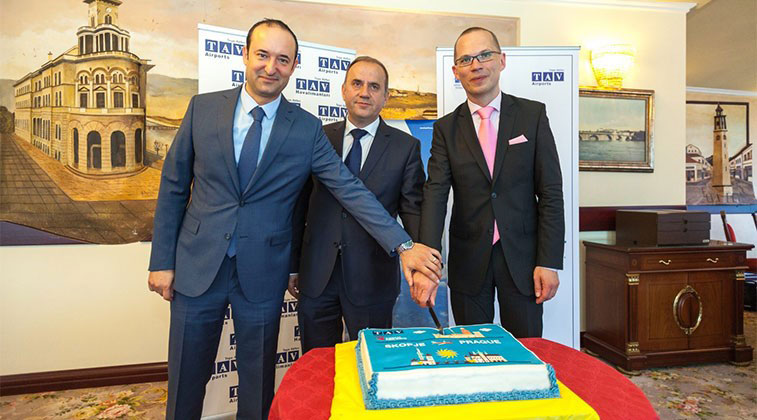 On 19 May Czech Airlines launched a twice-weekly service to Skopje from Prague, with an additional weekly flight being added last month. Prague is one of four new capital connections for the Macedonian airport, with it also gaining links to Berlin Schönefeld, Bratislava and Copenhagen during the past 12 months.

Skopje is the capital of Macedonia with an estimated population of just over half a million people. It is among Europe’s most entertaining and eclectic small capital cities. While an expensive and rather kitschy government construction spree has sparked controversy in recent years, Skopje’s new abundance of statues, fountains, bridges, museums and other structures have been built to encourage a national identity. The city is served by Skopje ‘Alexander the Great’ Airport, named after the King (Basileus) of the Ancient Greek kingdom of Macedon (Macedonia).

Since January 2012 the average monthly growth rate of Skopje’s passenger traffic is just under 17%. Within this period the airport has only witnessed two months of decline, with traffic down 18% in December 2013, and 1.5% in the following January. What is also interesting to note is that only four months in the period analysed (2012-2016) witnessed less than double-digit growth, with January 2013 and April – June of last year seeing only single-digit increases. Based on the airport’s 2015 passenger data, its SVID score (Seasonal Variation In Demand) is a “good” 6.19. 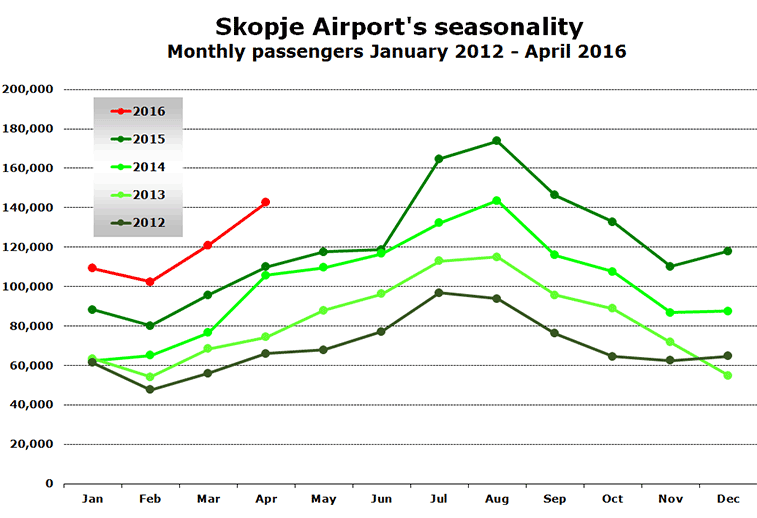 The best performing month for growth was December 2014, when traffic grew 37% when compared to the same month in the previous year. Since 2012, when the airport handled just over 835,000 passengers, traffic has grown 42%, with the airport last year welcoming 1.46 million. So far in the first third of 2016 – only data available (January to April) – traffic has grown at a double-digit rate each month, with the average being just over 21%. If this average rate continues throughout the remainder of 2016, Skopje will welcome just over 1.7 million passengers this year, over three times the overall population of the city.

Istanbul Atatürk has leapfrogged Zurich and Vienna to become the number one destination from Skopje, a route which is flown solely by Turkish Airlines which currently offers a twice-daily service to its Star Alliance hub. As well as Atatürk, Skopje is also connected to the Turkish city’s Sabiha Gökçen Airport by Pegasus Airlines. Launched on 16 August 2011, initially at a thrice-weekly schedule, the LCC now offers five flights a week on Skopje’s sixth busiest route, which has also grown 0.4% in the past year. 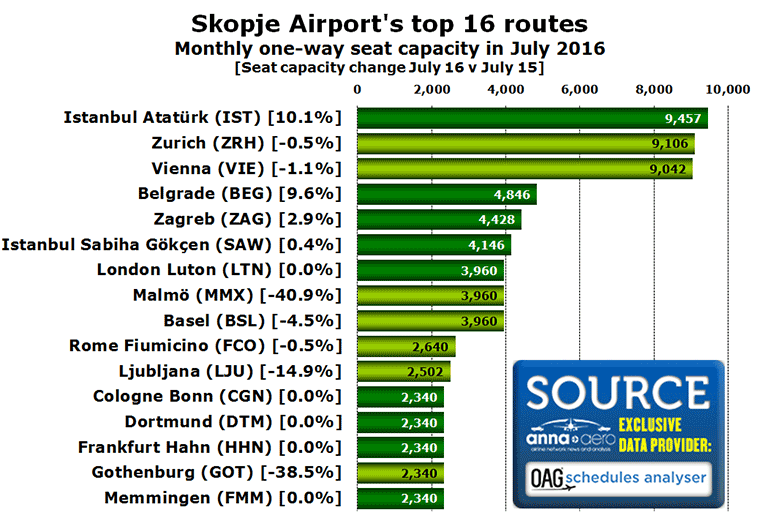 Only four of Skopje’s top 12 routes witnessed a growth in capacity during the past 12 months, with seven (highlighted in light green) showing a decrease in seats, while the remainder were at the same level as during July 2015. Of those to see the biggest cuts in capacity, Malmö (eighth largest route) has witnessed the biggest chop, with capacity down 41% to the Swedish airport. Coincidentally another city in Sweden took a major blow with regards to seat availability, with Gothenburg (joint 12th) also seeing a double-digit drop, this time 39%.

Skopje has lost service to three airports during the past year, however it is only one city connection that has been lost. Wizz Air’s services to Lübeck have moved to Hamburg, with capacity to the German city overall remaining constant. The second city that still sees a connection is Brussels, with Wizz Air serving Charleroi. OAG Schedules Analyser shows that Jetairfly ended its weekly service to Brussels’ main airport on 15 September last year, and as a result overall capacity to the Belgian capital is down 45% this summer. The only destination that has been completely lost form Skopje’s route map is Split, a sector which was served by Croatia Airlines weekly last summer.

However, the airport has not just lost routes, but gained some as well. During the past 12 months Czech Airlines has commenced operations from Prague, while Wizz Air has opened flights to Berlin Schönefeld, Bratislava and Copenhagen. The opening of these new capital connections means that overall capacity from Skopje is up 1.0% this July when compared to the same month of 2015. As well as the few routes mentioned, Skopje is also connected to the following European capital cities: Vienna (Austria), Belgrade (Serbia), Zagreb (Croatia), London Luton (UK), Paris Beauvais (France), Rome Fiumicino (Italy), Oslo Torp (Norway) and Stockholm Skavsta (Sweden). Outside of Europe the only connection which Skopje has is to Dubai, a route flown by flydubai.

After growing its capacity from Skopje by 1.9%, Wizz Air maintains its number one position in Macedonia’s capital. Overall, Wizz Air commands 47% of all seats from Skopje this summer, up from 45% in S15. 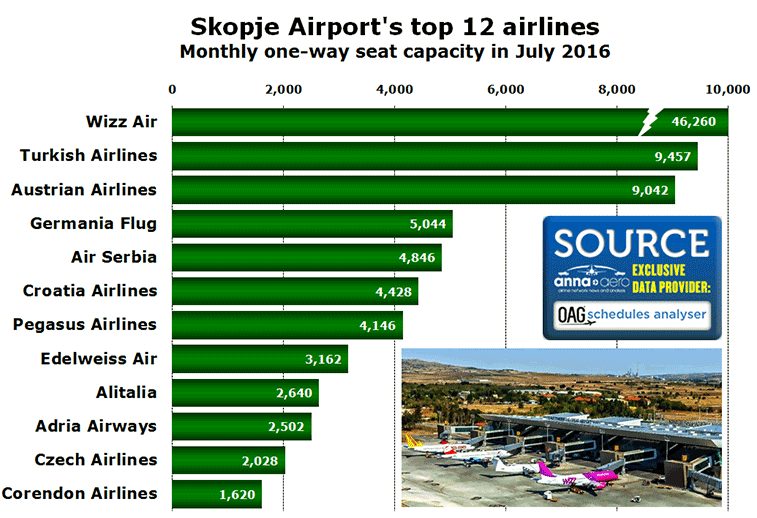 Looking at the airport’s remaining carriers, the best performing in relation to growth is Turkish Airlines, with its seat offering up 10%. The Star Alliance member has increased capacity on the route from its mega-hub by utilising more A320s on its double-daily service rather than using its smaller 737-700s and A319s on the sector. The second best performing carrier in relation to growth is Air Serbia on its route from Belgrade. A city pair also flown twice-daily, the carrier has replaced one of its 12 weekly ATR 72 flights with an A319 rotation, which has helped the airline to achieve a 9.6% rise in monthly seats this summer. 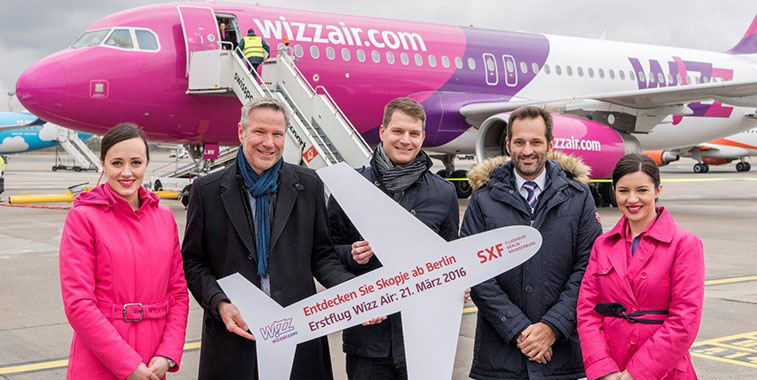 On 21 March Wizz Air launched flights from Skopje to Berlin Schönefeld, with the ULCC also launching flights from the Macedonian capital to Bratislava and Copenhagen the week after. Overall Skopje has welcomed four new European capital connections within the past year, and overall it is now connected to 12 European capitals.