Münster/Osnabrück-Berlin is Skyscanner “Unserved Route of the Week” with 100,000 searches in the last year; airberlin to return or Ryanair revolution??? 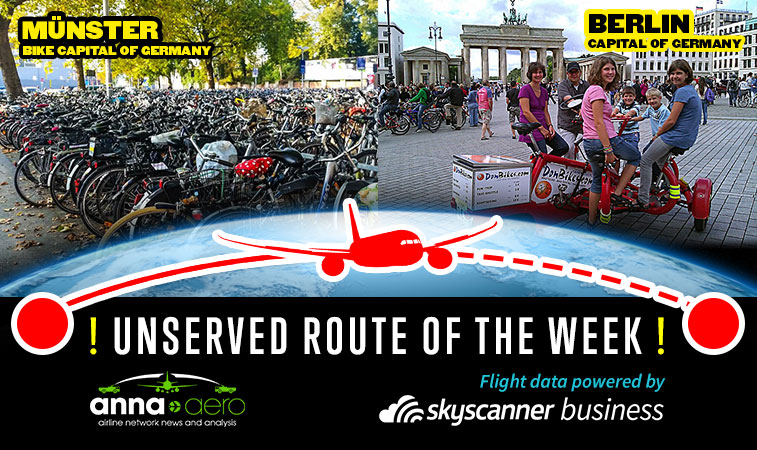 With nearly twice as many bicycles (500,000) as there are residents, the bike is the most commonly used means of transport in Münster, with more than 100,000 people using them every day – no surprises then that the city is known as the bike capital of Germany. According to Skyscanner data, there are also 100,000 potential passengers per year wanting to travel between the bike capital of Germany and the German capital – Berlin. Maybe one of the prospective carriers on the city pair – airberlin returning on the sector or Ryanair beginning its second domestic service ‒ could paint some of the bikes in their corporate colours when one of them starts this route?

With 100,000 searches last year, a potential new route from Münster/Osnabrück to Berlin has been identified as this week’s Skyscanner for Business-anna.aero “Unserved Route of Week” – a powerful new kind of analysis based on aspirational data captured from the Skyscanner.net flight comparison site used by +50 million unique visitors per month. “It is unbelievable that Münster/Osnabruck does not have a direct link to the German capital despite the huge demand,” says Detlef Döbberthin, Manager Aviation Marketing at the German regional airport. “airberlin served this route for many years from Berlin Tegel, but cancelled it back in 2012 due to their focus on larger airports and reduction of their presence at the smaller ones.” 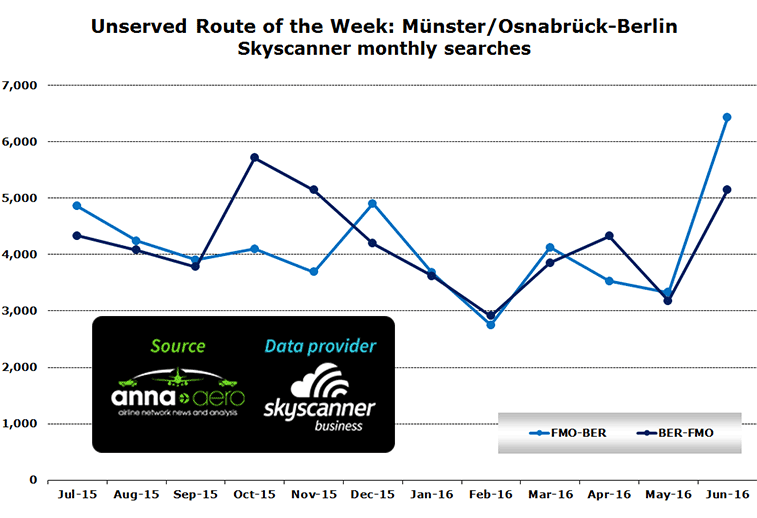 anna.aero advises airberlin to return on this unserved route

With the traffic on this route indicating a more or less 50/50 split between the two German cities – the demand to get into the capital from Münster/Osnabrück is likely to drive this potential city pair, so the regional airport’s #1 airline Lufthansa (43% share) in terms of weekly seats, or indeed its regional affiliate Lufthansa CityLine, are likely candidates for this unserved sector. Indeed the latter, operating under the parent’s LH code, is currently operating services to two domestic destinations from the airport, according to OAG schedules data for the week commencing 8 July, to Munich and Frankfurt (it should be noted that the mainline carrier does fly some of the capacity available on the Munich sector). The airport’s #2 carrier in terms of weekly capacity, Germania (19%), which flies to 13 destinations, is unlikely to start a domestic flight from Münster/Osnabrück, as it only operates one domestic sector across its entire network – between Dresden and Erfurt – according to OAG schedules.

Considering the Berlin end of the route, Tegel’s largest carrier (45% share) and previous incumbent on the city pair is airberlin (and still the #3 carrier at Münster/Osnabrück in terms of weekly seats), which flies to nine domestic destinations this summer – Munich, Düsseldorf, Cologne Bonn, Stuttgart, Frankfurt, Saarbrucken, Karlsruhe/Baden-Baden, Nuremberg and Westerland. Therefore another domestic route is not beyond comprehension for the oneworld carrier, once it emerges from its seemingly continual process of strategic and network review. “With a strong presence at its Berlin homebase, airberlin would be in the top position to return on this route,” adds Döbberthin. “It achieved 30% connecting passengers via its Tegel hub before. It served the route three times daily until 2012 with a Q400, but a double-daily would be a good start to return on this route.”

Looking across the German capital to Berlin Schönefeld, it is dominated by easyJet (40% share) and Ryanair (33%). While the #1 carrier, which has a network of 43 destinations from its ninth biggest base, is perhaps unlikely to consider a Münster/Osnabrück link an option, particularly as it currently offers no German domestic flights, the same cannot be said of the Irish ULCC. “Ryanair successfully serves the German domestic route from Schönefeld to Cologne Bonn and has experience in serving the North Rhine-Westfalian region in Germany and could add a second route with Münster/Osnabrück,” suggests Döbberthin.

When looking at the previous year of search data, the busiest month for potential traffic flows (for both directions on the route combined) is last month, June 2016, with over 11,500, nearly 6,000 higher than the lowest monthly figure, which was recorded in February 2016 (5,700). The seasonality profile of this search data is less extreme than last week’s Unserved Route of the Week (Lyon to Helsinki), with the low-month traffic representing 49% of the highest month. According to OAG Traffic Analyser, because there is no direct service, the top three connecting options chosen by those passengers who did book travel between Münster/Osnabrück and Berlin in the last 12 months were Frankfurt (96%), Stuttgart (3%) and Munich (1%). Not surprisingly given those results, there were just two more airports used by passengers keen to fly between the two cities, but with negligible traffic.

An O&D that is not served by a non-stop flight will typically display a low purchase rate and low traffic. In this instance Skyscanner’s Travel Insight indicates a monthly average of just 0.2% for the Münster/Osnabrück to Berlin route (see graph below). Therefore, if there was a Münster/Osnabrück to Berlin route, and if bookings performed in line with the “Skyscanner market average” for direct services at both airports (8.2%), the airline operating this route could immediately expect an improved purchase rate of a whopping 4000% ‒ our biggest stimulation factor yet ‒ without any increased marketing spend. However, with nearly 100,000 annual searches, the potential city pair should already be very sustainable. 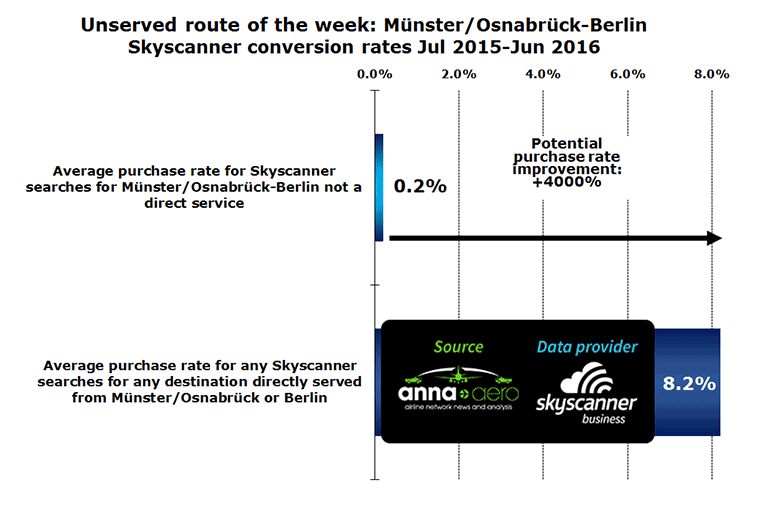