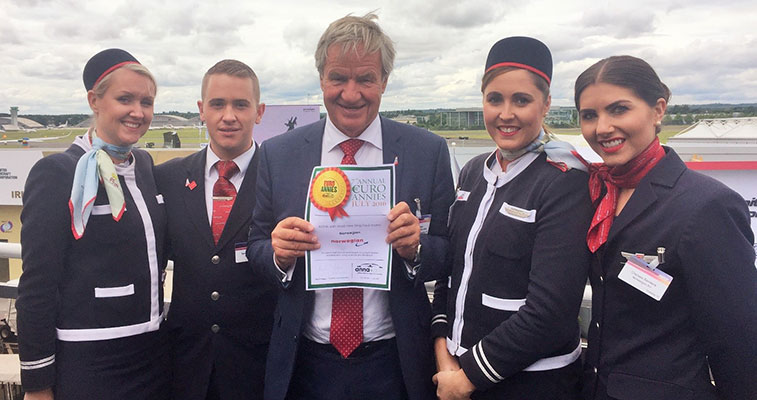 Taking a break from doing deals at Farnborough this week (he signed a massive maintenance deal with Boeing) to have a picture with some of his airline’s London Gatwick crew is Norwegian CEO Bjørn Kjos. The LCC won the ‘Airline with most new long-haul routes’, narrowly beating one of last year’s winners Turkish Airlines (there was a three-way tie in 2015) and Eurowings.

Following Part I – the airport awards ‒ we can now reveal the airline winners (and runners-up) in Part II of anna.aero’s seventh annual Euro ANNIES awards. Based purely on analysis of schedule data these scientific awards are all about what the airlines have actually achieved. For those awards given to airlines relating to their network growth we have analysed OAG schedule data for the first week of August 2016 and compared it (where appropriate) with the first week of August 2015. Strictly speaking we are not calculating the number of new routes, but the biggest net gain during the last 12 months, to take into account those sectors that may have been culled for whatever reason.

We have four awards, and these are spread across four countries ‒ although as one winner has multiple AOCs you could make the case that they are from even more nations. Only Poland has managed to deliver an award-winning airport (Warsaw Chopin and Warsaw Modlin) and airline, with the other victorious carriers hailing from Norway, Hungary and Cyprus. Other countries represented among the runners-up are airlines in Belgium, Germany, Greece and Turkey.

So, drum roll please, and the first award goes to …

Possibly reacting to the on-going network encroachment on “its patch” in Eastern Europe from the likes of Blue Air and Ryanair, Wizz Air has been very busy developing its scheduled network over the last year and wins this category at a canter. According to OAG schedule data, the Budapest-based ULCC now operates over 818 scheduled routes compared with 688 last summer. It should be noted that each airline’s result is calculated based on the route having an origin in Europe; so intra-European routes count double. Runner-up in this category was Belgium’s Jetairfly with a net gain of 109 routes (297 to 406). Not far behind were: Vueling (runner-up in 2014 and 2015), easyJet and Volotea, however Ryanair only managed sixth spot (although it is still by far and away the biggest carrier in Europe with 2,543 routes), just ahead of fast-growing Blue Air. The Romanian LCC has recently added 14 airports to its network, as explained by the carrier’s Revenue Management & Planning Director George Rizica, who has recently been interviewed by anna.aero’s Jonathan Ford. 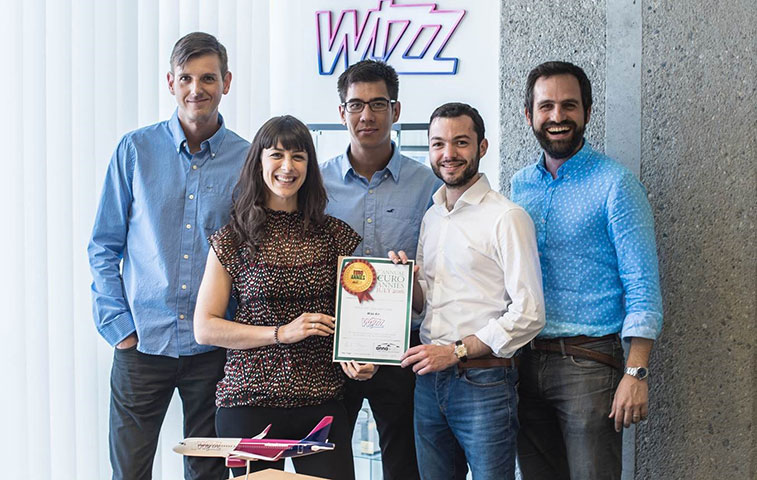 Using the same criteria as in Part I of the Euro ANNIES, (long-haul = a route longer than 4,500 kilometres) there is another LCC winner for the category of the biggest net gain in long-haul services from European airports. Growing by a net of nine additional long-haul routes since last August is Norwegian. These are spread across a variety of the airline’s bases – Stockholm Arlanda (to Las Vegas); Paris CDG (to Fort Lauderdale, New York JFK and Los Angeles); Copenhagen (Boston and Las Vegas); London Gatwick (Boston and Oakland) and Oslo Gardermoen (Boston). The Scandinavian LCC only just beat-off one of last year’s winners in this category (there was a three-way tie in 2015) ‒namely Turkish Airlines ‒ along with Eurowings, both adding eight long-haul services to their respective networks in the last 12 months. It should be stated that the “real” winner of this award, was American Airlines, which as a result of its merger with US Airways, actually posted a net growth of 23 long-haul routes. However, the oneworld carrier’s MD International Capacity Planning, Uzair Nathani declined the award on the basis of fairness…to which we say bravo!

LOT Polish Airlines won by two airports this award for most new destinations served in Europe. The Polish national carrier expanded its European network from 38 to 56 airports (a net gain of 18), beating Wizz Air, Ellinair and Olympic Air into joint second place, as all three posted a net increase of 16 airports. The additional 18 destinations introduced by the Star Alliance carrier included new connections to European capital cities like Athens, Belgrade, Chisinau, Luxembourg, Yerevan and Zagreb. When Robert Ludera, LOT’s Director Network Planning & Scheduling sent me this picture he also made the following statement: “Please find the photo of the team that contributed the most towards such great development of our scheduled network. Some people are unfortunately on their vacations. And of course, the success of LOT is also due to the whole company, not only due to the commercial team.” 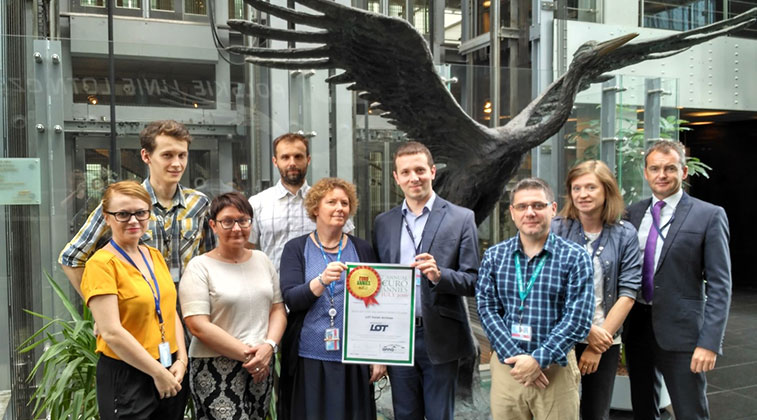 Cobalt – the chemical element – uses the symbol Co. Cobalt ‒ the new Cyprus-based airline – uses the defunct CO flight code, made available following the merger of Continental Airlines and United Airlines. Cobalt’s atomic number is 27, whereas the airline began operations from Larnaca on 7 July (also the seventh month), with seven routes – Athens, Chania, Dublin, London Stansted, Manchester and Thessaloniki. Wow – those coincidences reminded our data elves of that movie The Number 23, starring Jim Carrey and directed by Joel Schumacher, when a man becomes obsessed by the #23. More often than not, this award is won by a new entrant, as happened last year when Aeroflot’s in-house LCC Pobeda scooped the title. 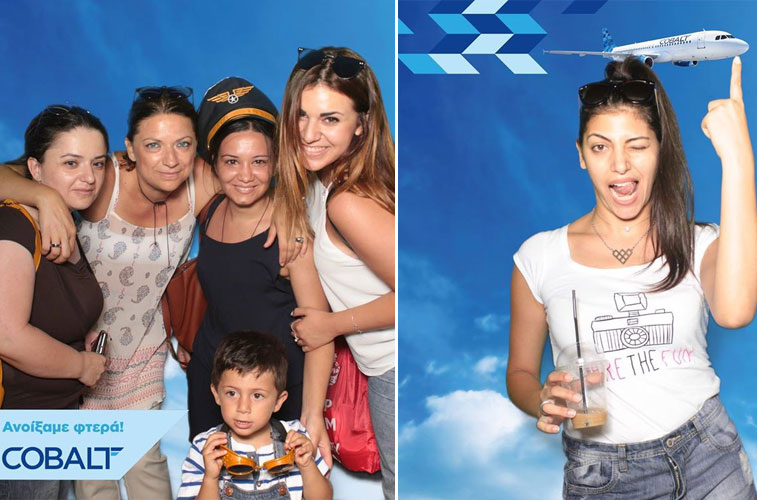 Passengers on the first flight of Cobalt were encouraged to dress-up and get their photos taken to mark the start of the LCC’s operations, which according to its website is “redefining the low-cost travel sector by combining the price flexibility and cost advantages of the low cost carrier business model with a high tech in-flight service delivery” from 7 July. Despite being around a week old, it has already won its first award. Hopefully it will go on to win many more over the coming years.