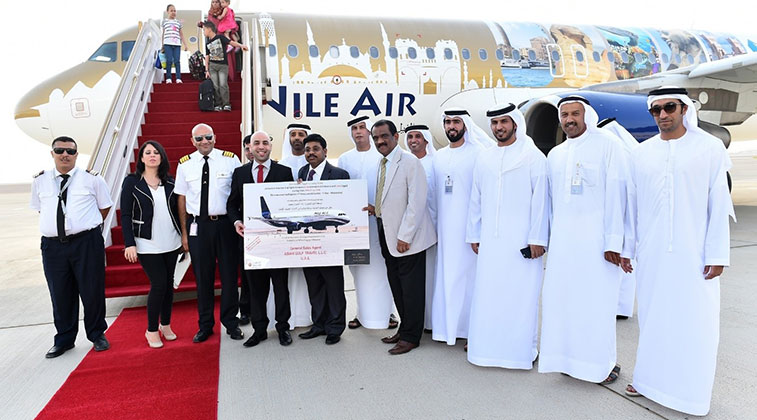 Nile Air became carrier #84 to the UAE when it launched flights to Al Ain from Cairo last month. As a result of its entry into the UAE, it is now the Middle Eastern country’s #74 largest airline, offering 492 weekly one-way seats on its route from the Egyptian capital.

Situated in the Middle East, the UAE (United Arab Emirates) is home to approximately 9.35 million people (2013). What makes the UAE so unique is that just under 17% (1.4 million) of the nation’s population are Emirati citizens, with the remaining 83% (7.8 million) being expatriates, with India (27%), Pakistan (12%) and Bangladesh (7.3%) being the top three expatriate origins. Established in December 1971, the country is a federation of seven emirates. The constituent emirates are Abu Dhabi (which serves as the capital), Ajman, Dubai, Fujairah, Ras Al Khaimah, Sharjah and Umm al-Quwain.

Although the UAE has the most diversified economy in the Gulf Cooperation Council (GCC), the nation’s economy remains extremely reliant on oil (with more than 85% of the economy based on oil exports in 2009), with the main exception being Dubai. Petroleum and natural gas continue to play a central role in the economy, especially in Abu Dhabi. The UAE has the second largest economy in the GCC after Saudi Arabia, with it achieving a GDP of $377 billion (US Dollars) in 2012. With its perfect geographical location for trade and connections, plus an accelerating economy, it is no surprise to see its aviation market, one of the most fascinating in recent times, expand so greatly during the past decade.

The UAE is served by six international airports, namely: Dubai, Abu Dhabi, Sharjah, Ras Al Khaimah, Dubai Al Maktoum and Al Ain. The nation is also served by Fujairah and Dalma and Sir Bani Yas, however these only see domestic scheduled services or general aviation. During the period analysed (January 2011 – March 2016), Dubai has welcomed just under 345 million passengers, Abu Dhabi 92 million, and Sharjah 45 million. As a result, the top three airports have handled nearly half a billion passengers since the start of 2011. 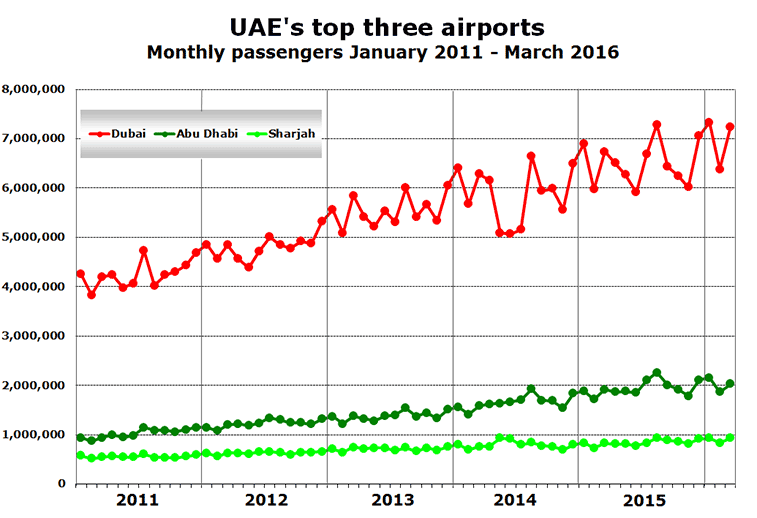 Last year was the first time which witnessed Dubai and Abu Dhabi combined welcome over 100 million passengers, with the former handling 78 million and the latter 23 million. Along with Sharjah (10 million), the top three airports processed 111 million passengers last year. All three airports’ monthly passenger statistics can be found in anna.aero’s Rest of the World Airport Traffic Trends database, which has been updated this week.

Dubai on course for 83 million

Last year Dubai welcomed just over 78 million passengers, with 2015 witnessing an average monthly growth rate of 9.7%. The best performing month for growth was July (up 23%), with the worst performing month being October, up just 4.2%. For Q1 of 2016, the average monthly growth rate for Dubai was 6.4%, which is up 0.1% when compared to Q1 of 2015. If the average monthly growth rate of 6.4% was to continue throughout 2016, Dubai will welcome 83 million passengers this year. However, with last year’s monthly average growth being above that achieved in Q1 this year, if that trend was to continue in 2016 we could see Dubai passing 84 million passengers. The dip in passenger traffic in Dubai between May and July in 2014 was due to essential runway maintenance that took place at the airport, restricting aircraft movements which resulted in airlines operating at a reduced schedule.

Looking at Abu Dhabi’s passenger statistics, what is evident is that the UAE capital’s airport is growing at a higher average rate than its Dubai counterpart. While Dubai achieved an average monthly growth rate of 6.4% in Q1, Abu Dhabi has published an average of 8.6%. Last year, Dubai’s overall average monthly growth rate was 9.7% whereas Abu Dhabi achieved just shy of 15%, with only one month (June) showing a single-digit growth rate (9.8%). However, Abu Dhabi has got a long way to go to build up the 54 million passenger difference between the two hubs.

Sharjah on track to get first month of one million passengers

Since September 2015, Sharjah has achieved double-digit growth each month, however the airport is still aiming for its first month of one million passengers. In Q1 of this year, the average monthly growth rate for Sharjah is 11%, the highest of UAE’s three largest airports. If this rate is carried throughout 2016, Sharjah can expect to achieve the magic one million passenger throughput in August, beating the target by approximately 30,000 passengers.

Looking at all 410 routes which operate to the UAE this summer, Dubai is served from 208 destinations, Abu Dhabi 105, Sharjah 74, Ras Al Khaimah 12, Dubai Al Maktoum eight and Al Ain three – the nation’s top 12 routes in terms of weekly one-way capacity all operate to Dubai. From Abu Dhabi, Dubai, Dubai Al Maktoum, Ras Al Khaimah and Sharjah, the number one route is Doha. The Qatari capital accounts for 4.1% of weekly seats from Abu Dhabi, 4.2% at Dubai, 48% at Dubai Al Maktoum, 17% at Ras al Khaimah and 6.9% at Sharjah. The number one route from Al Ain is Cairo (40% of weekly seats), a route launched by Nile Air just last week, and subsequently won the anna.aero Route of the Week title. 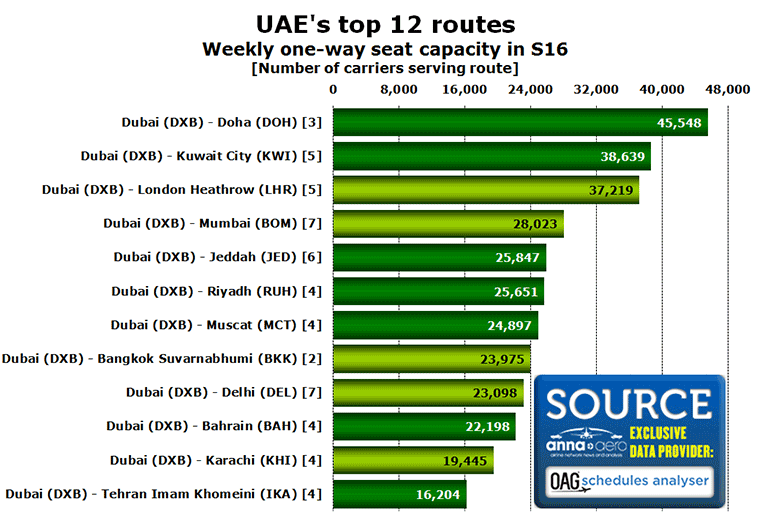 Highlighted in light green are services from the UAE which operate to a destination outside of the Middle East, with London Heathrow being number one. In total there are just over 1.5 million weekly seats from the UAE, with Dubai being the origin of just under 60% of all seats. Over one million seats are offered weekly from Dubai, the same as it was last year. However weekly seat capacity from Dubai is down 7.4% when compared to the same week last year, a result of how Ramadan has fallen in 2016.

India maintains top spot after achieving a near 11% increase in weekly seats, helped by the growth of IndiGo and Air India Express. It is of no surprise to see India as the largest country market, given that it has the biggest O&D potential with India being the number one expatriate nationality in the UAE. In May, the Indian national carrier subsidiary added flights from Delhi to Dubai and Abu Dhabi, while in March it linked Ras Al Khaimah with Kozhikode. In total there are 48 routes between India and the UAE, with Dubai – Mumbai being the number one, and coincidentally this route is also the largest route into Asia in terms of weekly capacity. 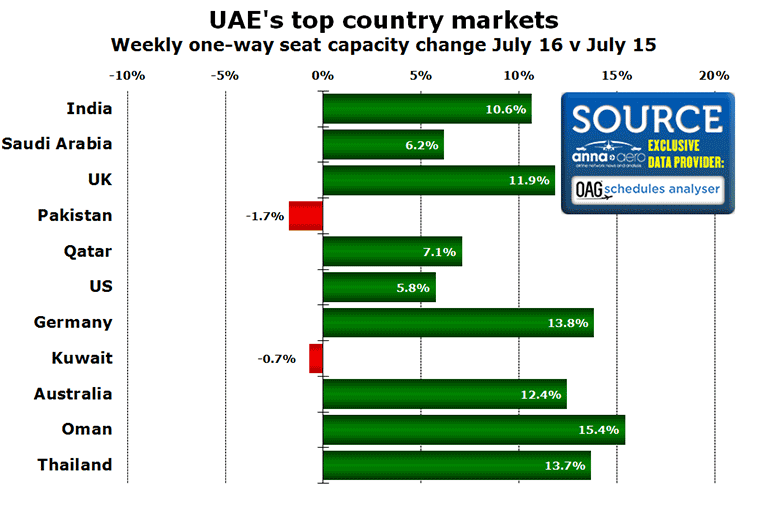 Outside of the top 12 some of the best performing country markets for growth were: Egypt (up 13%, 13th largest market); Italy (17%, 15th); China (10%, 16th); Philippines (24%, 19th) and Turkey (28%, 22nd). During the past year, three new country markets have been added to the UAE, namely New Zealand, Syria and Democratic Republic of Congo. New Zealand had been served one-stop before from the UAE, however Emirates has now commenced non-stop services to Auckland from Dubai on its A380s. Syrian Arab Airlines has resumed service to Abu Dhabi, Dubai and Sharjah from Damascus, while the Democratic Republic of Congo’s Equatorial Congo Airlines now links Dubai to Brazzaville.

flydubai is Dubai’s only based LCC, and since it commenced operations in 2009, the airline has gone on to achieve great success. Between July 2010 and July 2016, the airline has grown over 348%, by far the fastest growing UAE-based airline. The only carrier to beat its growth was Indian LCC IndiGo, which has grown 450% from the UAE in the same period. As well as flydubai, Emirates has grown its seat capacity by 209% since 2007, the year before it welcomed the first A380 into its fleet. Etihad Airways has grown by 205%. 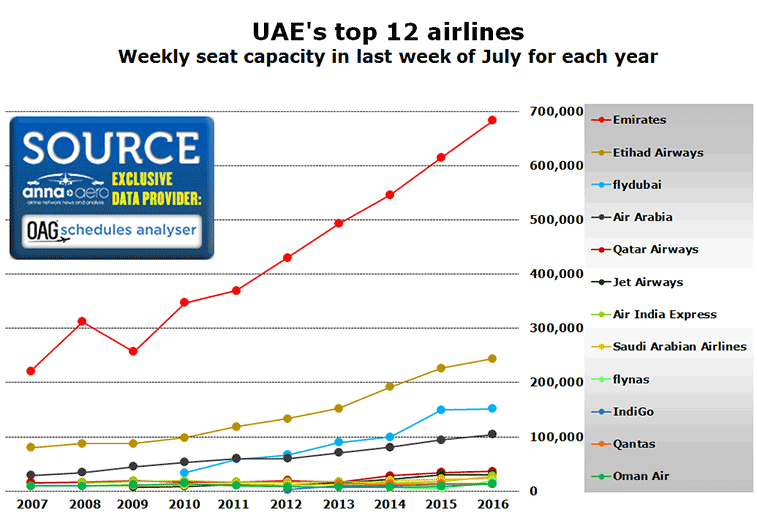 This summer the UAE is served by 84 carriers, all the way from the super-dominant Emirates to African Express Airways, which offers a weekly service between Dubai and Berbera in Somalia. Outside of the top 12 carriers, other leading airlines in the UAE are: SpiceJet (13th), Air India (14th), Gulf Air (15th), EGYPTAIR (16th), Air Blue (17th), Pakistan International Airlines (18th), Turkish Airlines (19th) and British Airways (20th).

Five of top 10 airlines did not serve 10 years ago

Looking further into the UAE’s top 12 airlines, only five of them were serving the nation in 2007. flydubai commenced operations in the second half of 2009, and has grown to become the UAE’s third largest carrier, and largest LCC. Jet Airways added flights to the nation in 2008 when it started daily operations from Delhi and Mumbai to Abu Dhabi. flynas, formerly Nas Air, has served Abu Dhabi, Dubai and Sharjah since its rebranding in 2013. IndiGo added the UAE as a country market in 2011, while Qantas added services to Dubai in 2012 when it launched a cooperation with Emirates between Europe and Australia. 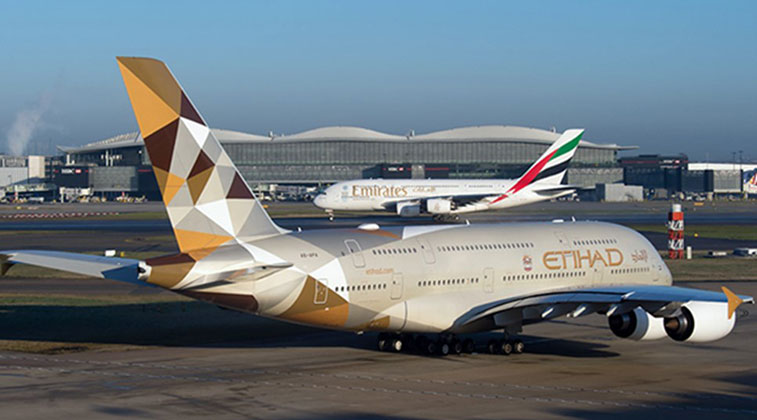 Emirates has grown by 209% from its Dubai hub since 2007, while Etihad Airways has grown by 205%, confirming them as the largest and second largest carriers from the UAE respectively. Seen here are A380s from both carriers about to depart from London Heathrow. Dubai to Heathrow is the country’s third largest route, while Abu Dhabi to Heathrow is the nation’s 21st largest, and Abu Dhabi’s second biggest after Doha.