Europe’s newest long-haul LCC French Blue welcomed its first A330-300 in June, with it being greeted on its arrival after delivery. The carrier will operate flights from Paris Orly, launching on 10 September, to Punta Cana and La Réunion according to its website.

Deliveries during the sixth month of 2016 between Airbus and Boeing totalled 138 units, 10 more aircraft than what was delivered during the fifth month of this year by both companies, but equal to that delivered in the same month of 2015. During June, Boeing distributed 74 aircraft, with the European manufacturer garnering a total of 64. The result means that so far in 2016 Boeing has delivered 77 more aircraft than Airbus, increasing its lead by 10 units when compared to May’s difference between the two manufactures. Boeing’s June delivery total is seven units more that what it delivered in the same month of last year, while Airbus delivered three more aircraft when compared to June 2015. Overall 70% of deliveries in June were narrow-body aircraft, with the remaining 30% being wide-body. Looking at the wide-body market for June, Boeing produced 71% of aircraft (down from 73% in May), while Airbus produced the remaining 29%. 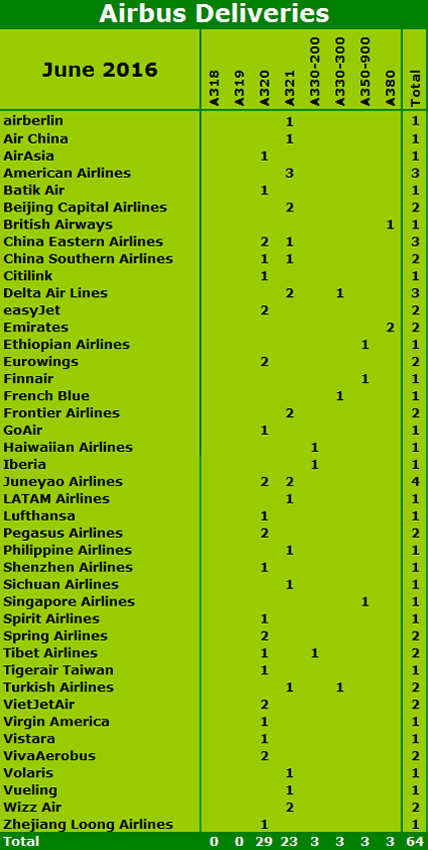 Airbus ended June with a total of 64 unit deliveries, which is seven more than what the company delivered in May, and three more than what it distributed during the corresponding month of last year.

In June, single-aisle deliveries were led by the A320 (29 units – three more than May), while the A321 followed in second place (23 units – up one from May), with a grand total of 52 single-aisle aircraft being provided to carriers around the world. It should be noted that no A318s or A319s were delivered. This means that Airbus produced seven more narrow-body aircraft than Boeing in June. A total of 21 airlines received A320s (up five from the total of May), with China Eastern Airlines, Eurowings, Juneyao Airlines, Pegasus Airlines, Spring Airlines, VietJetAir and VivaAerobus being the largest recipients of the variant, with the seven airlines each picking up two of the type. In relation to A321 deliveries, 16 carriers picked up the type (the same as in May), with American Airlines being the biggest customer, collecting three. Beijing Capital Airlines, Delta Air Lines, Frontier Airlines, Juneyao Airlines, and Wizz Air all picked up two A321s. Delta, Tibet Airlines and Turkish Airlines were three carriers which welcomed a narrow-body and wide-body aircraft from Airbus in June.

Looking at wide-body deliveries, Airbus handed over 12 airframes in June, three more than in May. Following on from the delivery of three A380s in the fourth and fifth months of this year, the European producer handed over three again in June, with two aircraft going to the world’s leading A380 operator Emirates, while the other was handed over to UK flag carrier British Airways. All four wide-body aircraft produced by Airbus – A330-200 and -300, A350 and A380 – were all delivered to airlines in June. What is also interesting is that three of each type were delivered to carriers. Emirates was the only carrier to pick up more than one wide-body unit last month. Ethiopian Airlines collected its first A350 in June, with it becoming the seventh operator of the type after Cathay Pacific Airways, Finnair, LATAM Airlines, Qatar Airways, Singapore Airlines and Vietnam Airlines. To celebrate, the airlines achieved the world record of creating the largest ever human image of an aircraft. Ethiopian Airlines set a world record when it welcomed its first A350, creating the largest ever human image of an aircraft on 29 June. The officially recognised Guinness World Record was handed over to Tewolde Gebremariam, CEO of the Star Alliance carrier. Ethiopian Airlines becomes the seventh A350 operator, joining Cathay Pacific Airways, Finnair, LATAM Airlines, Qatar Airways, Singapore Airlines and Vietnam Airlines. 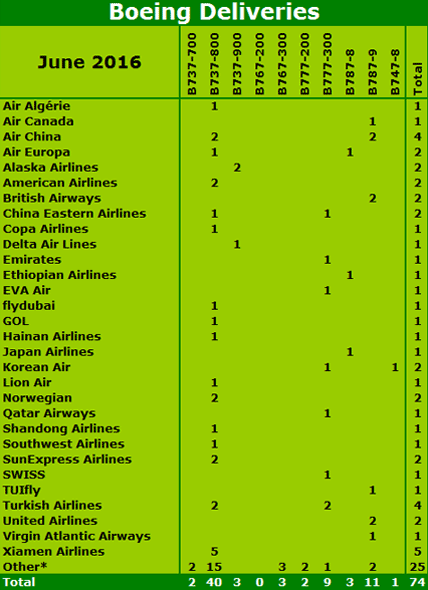 Boeing closed June with a total of 74 unit deliveries, three more than in May, and seven more than in the corresponding month of 2015. Airlines received a total of 45 single-aisle units from Boeing in June, two less than May. A total of 40 737-800s were delivered, while only three 737-900s were. It should also be noted that two 737-700s were delivered in June to leasing companies. Ryanair, which was the largest recipient of the 737-800 in May, April, March and February, picking up eight of the variant into its fleet each month, did not pick up one aircraft in June. However for 2016 the Irish LCC is still the largest recipient of the -800, having welcomed 40 since January. As a result, it has meant that Xiamen Airlines is the largest recipient of the -800 in June, collecting five of the type. In total, 18 airlines were delivered single-aisle units from the American manufacturer during June, five more than in May. Nonetheless it should be noted that 15 737-800s were delivered to leasing companies, as well as the two mentioned -700s.

An analysis of wide-body deliveries reveals that Boeing handed over a total of 29 units to airlines in June, five more than in May, and 10 more than April. Boeing handed over 14 787s in June, four more than the month previous. Air China, British Airways and United Airlines were the largest recipient of the 787-9, with the Star Alliance and oneworld members picking up two of the type each. TUIfly also collected its first 787-9 last month. Of June’s 787 deliveries, only three were -8 variants, with Air Europa, Ethiopian Airlines and Japan Airlines each collecting one. Korean Air was the recipient of the only 747-8 to be handed over in June, its third delivery of the type this year. It also collected one 777-300. 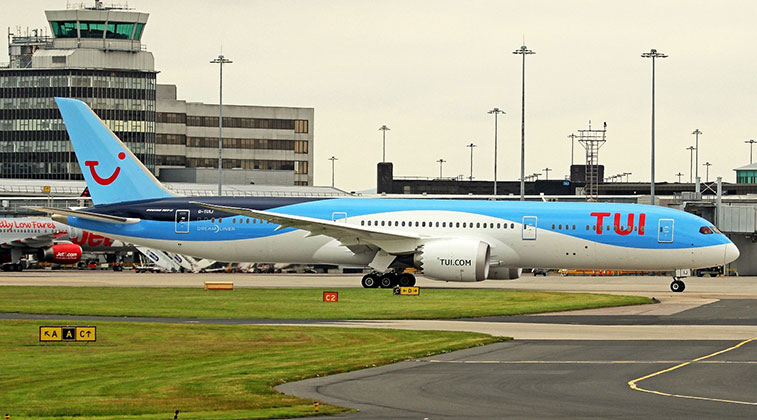 Seen taxiing for departure at Manchester is TUI’s first 787-9. The company, which has subdivisions all over Europe, including Thomson Airways, Arkefly, Jetairfly and TUIfly, has started to bring all of its operations under the one TUI brand.