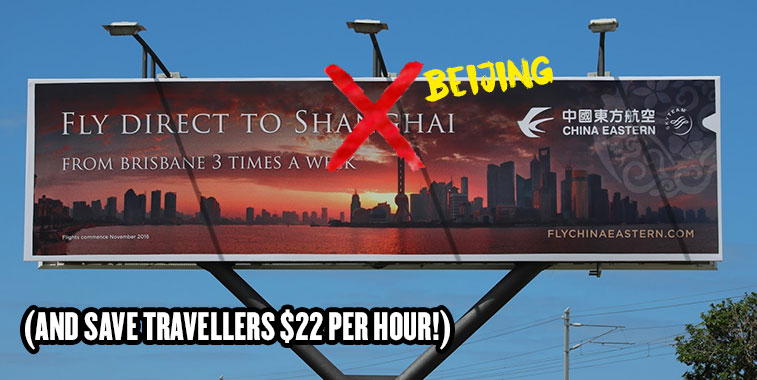 How much would you pay to reduce your travel time by one hour? Skyscanner analysis shows it’s around $8 for long-haul passengers: travellers wanting to fly Beijing-Brisbane – not a directly-served route – are willing to pay an average of $22 per hour to shorten their travel time. (Brisbane-Beijing was Skyscanner-anna.aero Unserved Route of the Week in March with 60,000+ annual searches.)

Skyscanner, the global flight comparison site visited by 50 million would-be travellers every month (and a closely-held data partner of anna.aero)  has revealed the value airline passengers are willing to pay to save an hour of their travel time. The analysis reveals that $8 is the average value passengers are willing to pay to save each hour of their time, by choosing flights with a shorter total journey time and less of a stop-over. The global travel search engine analysed the top 100 most popular (Click here to view routes) long-haul routes (6-10,000km) plotting the duration of routes booked against the price they paid for the flight to show the value they place on saving journey time in the period of June 2015 to May 2016.

Several factors were shown to influence the value of time savings on routes. For example, the analysis found that passengers seem willing to pay more ($1-2 on average) on journeys which form part of shorter trips of less than seven days. Whether the route is more popular for business or leisure and competition also appears to play a key role in how much value passengers are willing to pay per hour saved. 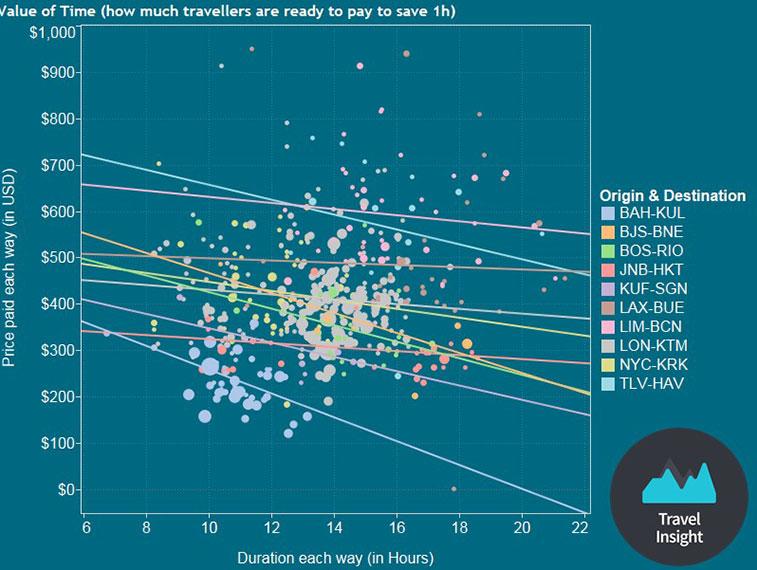 Skyscanner analysed the top 100 most popular long-haul flight routes, plotting the duration of routes passengers booked against the price they paid for the flight to show the value they place on saving journey time.

As part of the analysis, Skyscanner also picked 10 popular global routes which currently lack a direct non-stop connection, calculating the value of reducing time on those routes, and showing the potential opportunity for carriers to introduce direct flights.

On the Bahrain to Kuala Lumpur route for example, which is popular but has no direct route, passengers pay on average $26 per hour to shorten their journey. Meanwhile passengers flying between Los Angeles and Buenos Aires, where more choice from carriers exists, pay on average an insignificant $2 per hour saved. This potential route has also been chosen as anna.aero’s “Unserved Route of the Week.” 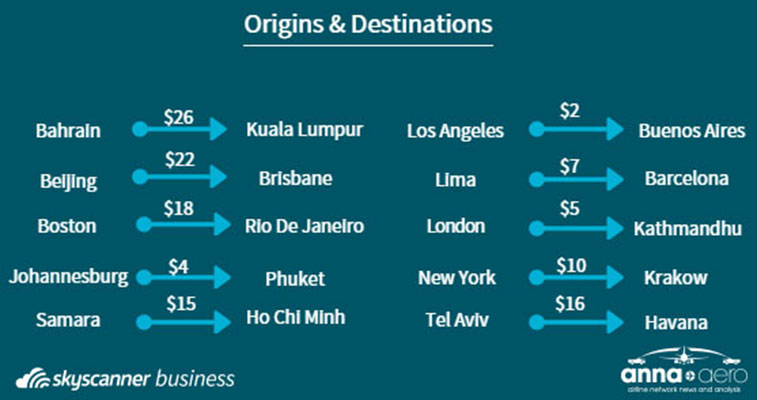 Connecting passengers flying from Beijing via a hub airport to Brisbane are prepared to pay ($22) twice as much as those undertaking a one-stop journey between New York and Krakow ($10). This type of data is gold dust to airline network planners considering launching a service on unserved long-haul city pairs just like these.

Head of Business Development for Skyscanner Analytics Faical Allou commented on the results: “In this day and age, time is an increasingly valuable commodity. Looking into the value of reducing journey time involved in taking a flight, particularly a long-distance one, reveals interesting insights and shows that there are several factors involved in how much value passengers attribute to reducing travel time, such as whether the trip is for business or leisure, the length of the trip and the choice of carriers and itineraries on offer. This information could play a key role in airlines’ and airports’ decisions. Understanding the value passengers place on time for different routes can reveal great commercial opportunities for carriers.”