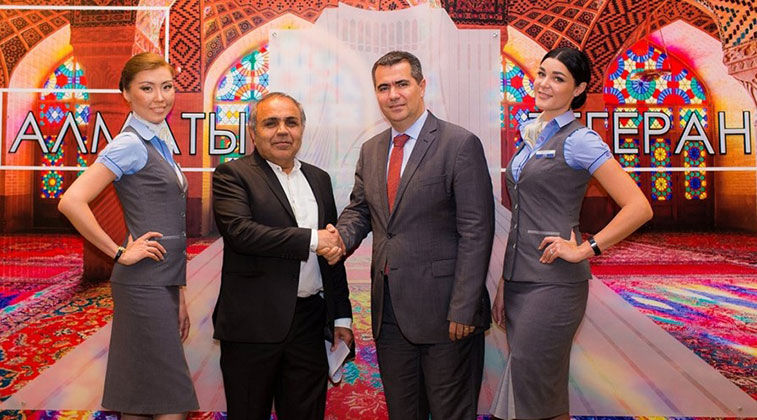 Since 2006, Air Astana’s passenger traffic has grown 163%, with an average year-on-year increase of 9.6%. During that time period, the biggest increase year-on-year was between 2006 and 2007, when traffic rose by 31%. During that time, the airline went through a major expansion, while also adding flights to Antalya, a destination served from both Almaty and Astana. Only one year in the past decade, 2009 (highlighted in light green), showed a drop in traffic, with overall passengers being down 4.5% when compared to 2008. 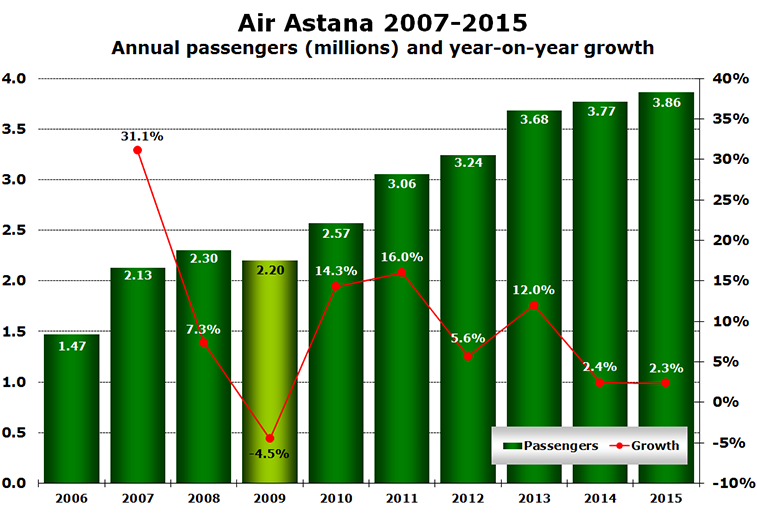 Between January 2006 and December 2015, the airline carried over 28 million passengers. With the average year-on-year increase for passenger traffic for Air Astana being 9.6%, if this level of growth is to be maintained in 2016, then Air Astana can expect to carry 4.2 million passengers this year. However in 2014 and 2015, the average growth rate was just under 2.4%. With this being a more realistic target for growth in 2016, then anna.aero predicts that Air Astana will carry just shy of four million passengers this year. However, 2017 may see faster growth as Astana will host the Expo 2017 between 10 June and 10 September, on the theme of “Future Energy”.

Of the 22 country markets which Air Astana serves, with Iran being the latest and 22nd largest country market, Ukraine (12th largest) is the only country to have wtinessed triple-digit growth. This is a result of Air Astana increasing its service between Almaty and Kiev Boryspil from thrice-weekly to daily, with the link between the two cities flown on the carrier’s A320s. 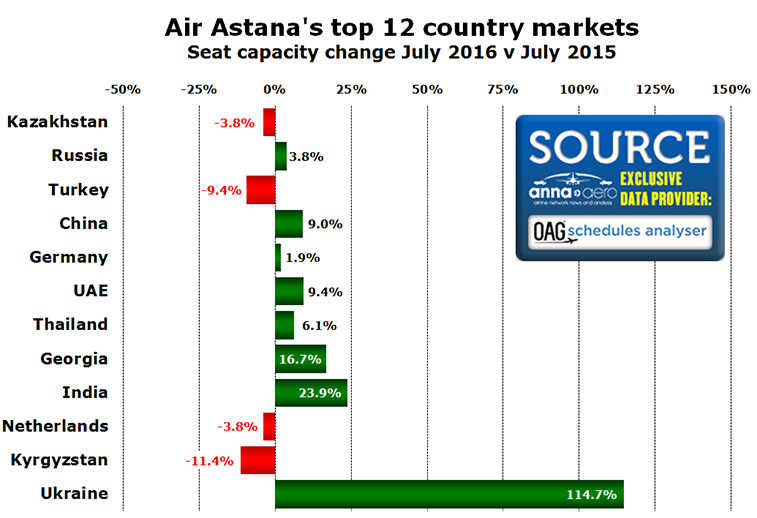 Two new nations have joined the carrier’s top 12 markets in 2016, with South Korea and Uzbekistan moving to 13th and 14th respectively. Ukraine and India move into the top 12, with India having seen a 24% growth in capacity when compared to July last year. As well as South Korea (down 4.7%) and Uzbekistan (2.5%), the only other countries outside of the top 12 to have seen a cut in capacity are Malaysia and Tajikistan, with the former reporting a modest 2.6% decline, while the latter has seen a 3.2% cut in monthly seats. As well as Georgia and India, the UK and Vietnam have both recorded double-digit growth in capacity. Vietnam (20th largest market) has shown a 20% growth in seats, a result of Air Astana introducing a 767 on one of its 757-operated twice-weekly flights between Ho Chi Minh and Almaty (operates outbound via Bankgok Suvarnabhumi). The UK (16th largest market) has witnessed a 24% growth in seats, a result of Air Astana having increased its frequency from Astana to London Heathrow from three to four times weekly.

Hub pairing is number one route

The connection between Air Astana’s two hubs, Almaty and Astana, is the carrier’s number one connection. The airline currently offers 61 weekly flights (down from 67 in S15) on the route according to OAG Schedules Analyser data, with a majority of those being served by its 757-200s. Overall Air Astana operates from 42 airports on a total of 65 routes. 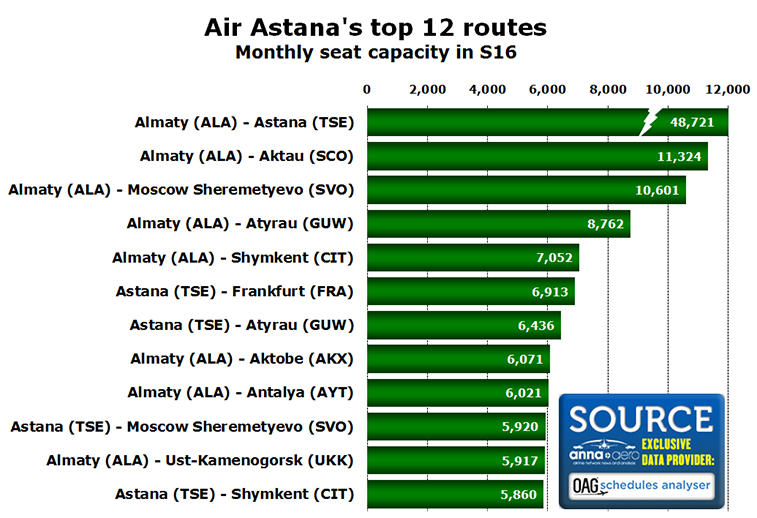 Astana connects to the West while Almaty links to the East

What is interesting about Air Astana’s network is the geographical breakdown of the carrier’s medium- to long-haul operations. Astana, Kazakhstan’s capital city, sees a vast majority of its medium- to long-haul connections being to Europe. The city is linked to Frankfurt, London Heathrow, Istanbul Atatürk, Moscow Sheremetyevo, Paris CDG and St. Petersburg. Almaty, the largest city in Kazakhstan, and considered a ‘World City’ with a “Beta” classification according to GaWC (Globalisation and World Cities), the leading academic thinktank on cities in globalisation at Loughbourgh University, sees a majorioty of its medium- to long-haul connections being to Asian destinations including Bangkok Suvarnabhumi, Beijing, Delhi, Dubai, Ho Chi Minh City, Hong Kong, Kuala Lumpur and Seoul Incheon. However, that is not to say that each continent is singled out by each hub. Astana is connected to Beijing, Dubai, Incheon and Suvarnabhumi in Asia, while Almaty is linked to Atatürk, Kiev, Sheremetyevo and St. Petersburg in Europe. The carrier also serves Amsterdam and Hannover in Europe. However, the former is linked to Aytrau, while Hannover is connected in the summer season to Kostanay.

Using anna.aero’s rule of thumb when confirming a long-haul route, it is a sector that is over 4,500 kilometres. Looking at Air Astana’s network, only six of its routes class as being long-haul, with the longest sector being the 5,127-kilometre link between Almaty and Kuala Lumpur. Of the airline’s 848 weekly flights, only 1.7% (14 weekly flights) are long-haul services, with 47% of the carrier’s weekly flights being on routes which are under 1,000 kilometres. 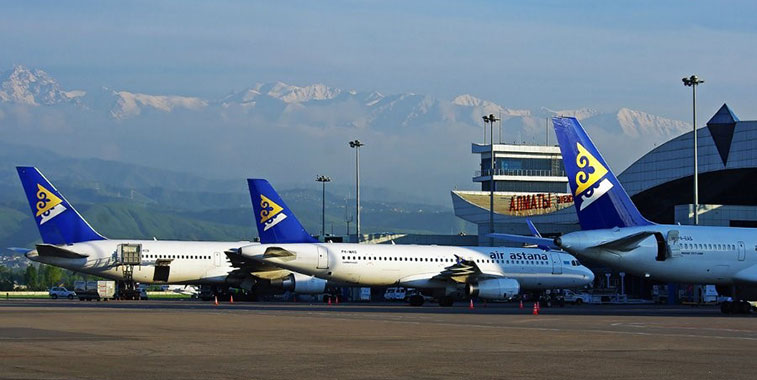 Almaty, the largest city in Kazakhstan, is coincidentally the largest airport operation for Air Astana, with it seeing 32% of weekly departing seats. As well as 767-300s, A320s and 757-200s, with the back-end of one featuring in this image, the carrier also operates one A319, A321s and E190s, with the airline having an order for three 787-8s.