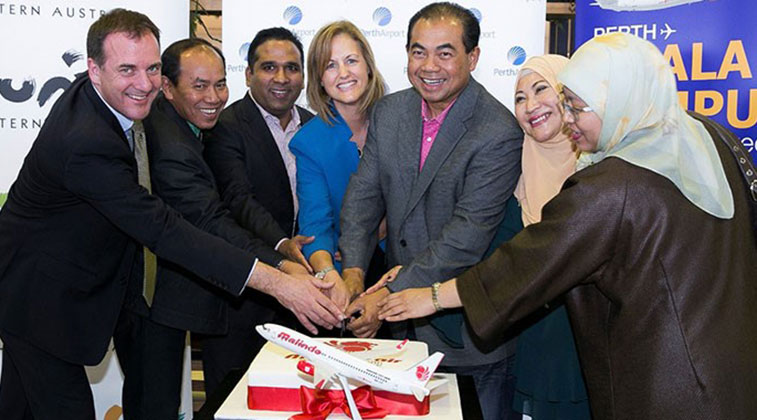 Touchdown in Oz! Malindo Air made its first appearance in Australia on 19 November 2015, with the arrival of the airline’s first flight from Kuala Lumpur at Perth Airport. The LCC was one of two new airlines to introduce services from the Western Australian state capital airport over the past 12 months – the other was domestic airline Regional Express.

Perth Airport is the fourth busiest in Australia, a position it has held since 1995, when it last traded places with the country’s now fifth biggest facility, Adelaide. The airport serves the state capital of Western Australia and offers a network of 44 non-stop destinations (down from 48 last year – having lost Phuket in Thailand and Derby, Woodie Woodie and Windarling in Australia) across 14 countries, which were operated by 24 serving airlines (up from 22 a year ago), according to OAG schedules data for the week commencing 18 July. The two new tail fins added to Perth’s roll call of airlines over the last 12 months are Malindo Air, which operates 12 times weekly from Kuala Lumpur, and Regional Express, which offers domestic services to Albany (23 times weekly) and Esperance (18 times weekly). 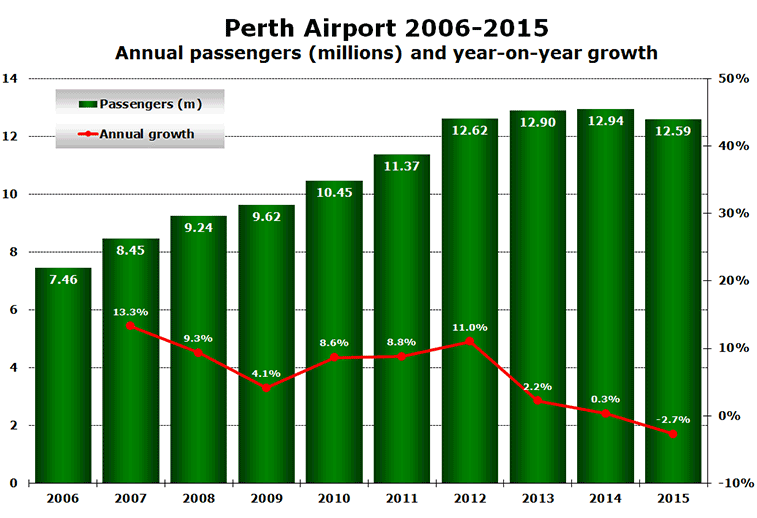 Despite the slowdown in activity at the major heavy industries which have fuelled much of the last decade of growth for Perth – namely the extraction of Western Australia’s wealth of natural resources including bauxite, iron ore, gold, diamonds and coal ‒ the airport has been able to maintain its annual throughput in a range between 12.5 and 13 million passengers. Traffic is down by less than 1% so far this year, with passenger figures falling from 4.17 million in 2015 to 4.14 million in 2016 for the period January to April. Departing seat capacity for the week commencing 18 July for 2016 is 5.7% lower than for the same week a year ago.

Entering Perth’s monthly passenger data for 2015 into anna.aero’s Seasonal Variation in Demand (SVID) calculator, the airport performs very well, generating a score of 0.52 ‒ an ‘Excellent’ rating. The airport ranks fifth out of the 31 airports which have had their 2015 figures analysed, lying behind its Australian peers Adelaide (0.39), Melbourne (0.43), Sydney (0.44) and Brisbane (0.48). Looking at the airport’s SVID result for 2014, Perth’s performance has improved in the last 12 months, with its score decreasing from the more peaky traffic profile of 0.58 attained in the previous year.

With this ‘Excellent’ performance, anna.aero’s data elves looked back in their extensive data archives of SVID scores (well back to 2012 results – when we started this) to see how the Australian airport fared against previous fifth-placed facilities. In 2013, but using 2012 passenger figures, the fifth-placed airport was Abu Dhabi with a score of 0.44, in 2014 (2013 figures) it was Orange County in California (0.60), and in 2015 (2014 figures) it was Sao Paulo Viracopos and Busan (0.34).

Perth’s top 12 airlines currently represent 90% of the airport’s weekly seat capacity, down marginally from 91% in July 2015. The airport’s biggest two carriers in terms of weekly seats – Qantas (37% share) and Virgin Australia Airlines (25%) ‒ have both delivered double-digit cuts to their respective capacities in the past 12 months. As previously mentioned, Regional Express is a new carrier to Perth, which is due to it attaining two new domestic services to Albany and Esperance from Virgin Australia Airlines in February this year. The loss of these routes also helps to partially explain the 10% reduction in seats from Australia’s #2 airline (in terms of weekly seats). 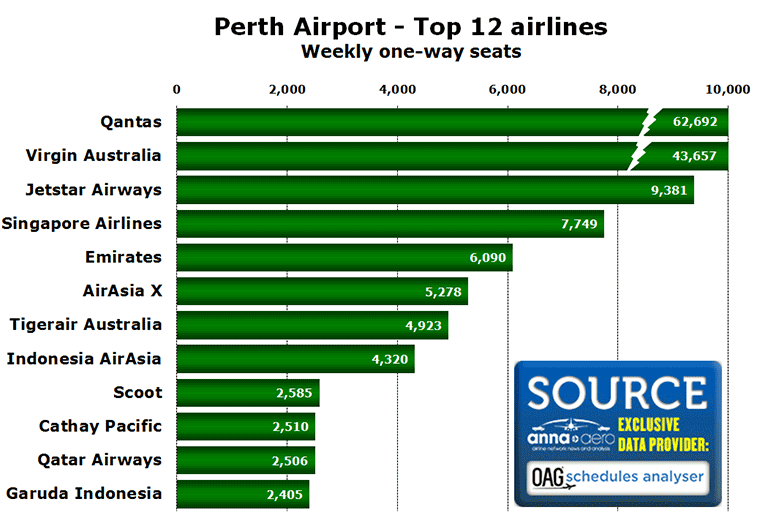 It’s not all doom and gloom in Perth, as several carriers have posted annual growth despite the prevailing market conditions. Tigerair Australia, wholly-owned by Virgin Australia, has grown its presence at the airport by 37% year-on-year, beating the 27% capacity increase registered by AirAsia X over the same period. The only two airlines moving in or out of the top dozen carriers are Malaysia Airlines and Qatar Airways. The Malaysian national carrier, which was last year’s eighth largest carrier at Perth, has slumped to 14th spot, replaced in the top 12 by the Doha-based oneworld airline.

Malaysian capacity up by 19%

Given the fact that the airport’s two biggest carriers are predominantly domestic operators from Perth – 98% of Qantas’ seats and 99% of Virgin Australia’s are flown within Australia ‒ it should be of no surprise that the home market is down by 8.8% since last July. Of the 14 country markets which are served from Perth (no change from last year), the network bright spots are Malaysia (+19%), Qatar (+6.9%) and Singapore (+4.9%). 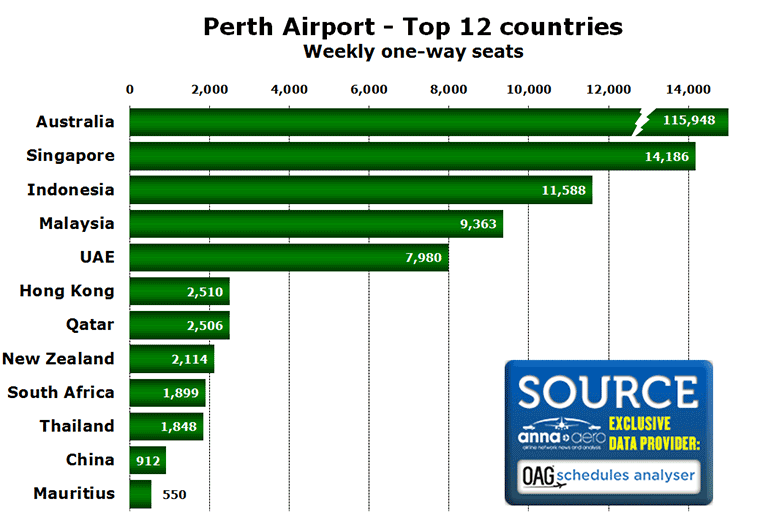 No new routes planned – yet!

Looking ahead to the (Northern Hemisphere) remainder of S16, as well as W16/17 and S17 operational seasons, there are currently no new routes planned for Perth, according to anna.aero’s New Route Database. However, as soon as this situation changes, we will bring you all the latest news from Australia’s fourth biggest airport. 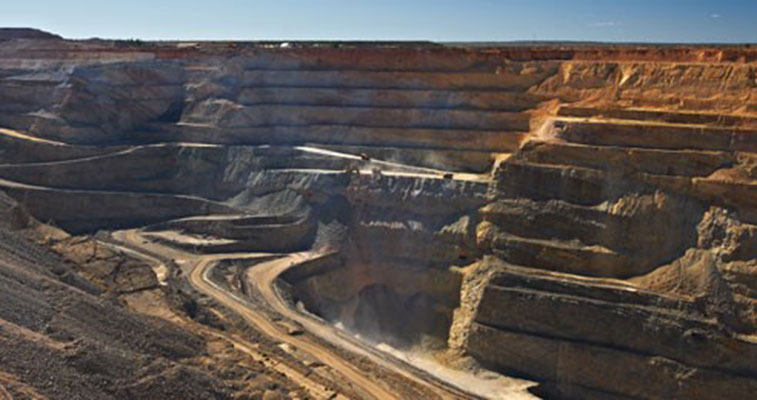 The Telfer gold-copper mines in the Great Sandy Desert in the East Pilbara region of Western Australia, are 400 kilometres from Port Hedland and approximately 1,300 kilometres by air from Perth. The state capital’s airport, the fourth busiest in Australia, relies on traffic to destinations like Port Hedland which support this type of heavy industry, however seat capacity on domestic routes is down 8.8% year-on-year.