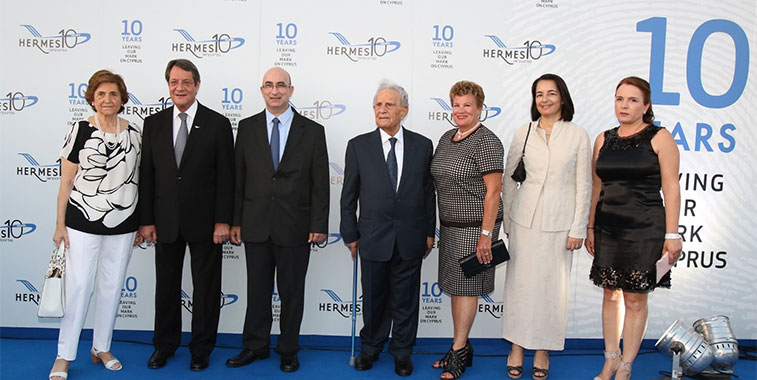 Hermes Airports recently celebrated 10 years of running Cyprus’ two main airports at Larnaca and Paphos. Last year the two airports handled a record 7.7 million passengers despite the demise of the country’s flag carrier, Cyprus Airways, at the beginning of the year. As with Budapest in Hungary, it seems that the collapse of an unprofitable flag-carrier can actually be good news for the country’s airports.

Hermes Airports recently celebrated the tenth anniversary of running two airports in Cyprus at Larnaca and Paphos. During that time passenger numbers across the two airports have grown from just over 6.5 million to just over 7.5 million in 2015, despite the demise of the national airline, Cyprus Airways, in January 2015. It should be mentioned that there is also a third airport on the island of Cyprus, in Ercan, which is in the disputed area known locally as the Turkish Republic of North Cyprus, which covers over 35% of the island. While anna.aero has been unable to source reliable passenger statistics for the airport, based on analysis of OAG schedules data, Ercan Airport would appear to be between the other two airports in size, handling between 3.5 and four million passengers in 2015, all on flights to Turkey. As far as OAG is concerned, all three airports are simply in Cyprus and so we shall examine them all together. 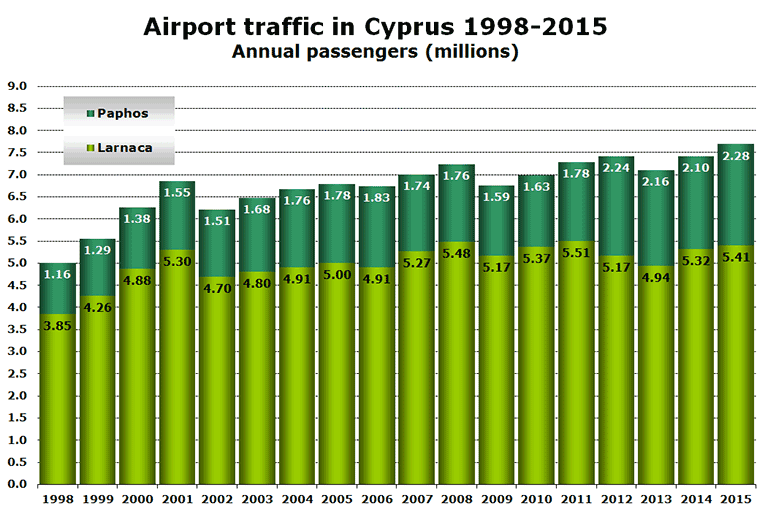 Passenger numbers at Larnaca and Paphos first passed six million in 2000, and then passed 6.5 million in 2001. However, in a post-‘9/11’ world it would take until 2007 before the two airports reached the seven million mark and a further eight years before more than 7.5 million passengers were handled. During the last 15 years, Larnaca’s share of the traffic has fallen from 78% to 70%, while Paphos’s share has risen from 22% to 30%.

Both airports suffer significant seasonality, as one would expect from airports that cater predominantly to inbound tourism during the northern European summer months. Quantifying this using anna.aero’s Seasonal Variation In Demand (SVID) calculator reveals that Larnaca scored 28.00 in 2015, while Paphos was only slightly better with 24.22. Both of these scores come into the “managerial and operational challenges” category of our scoring system. Looked at it in another way, both airports prcoess more than four times as many passengers in their busiest month (August) as they do in the quietest month (February).

So far in 2016 Larnaca has seen a 20% growth in passenger numbers compared with 2015, while at Paphos the growth is rather more muted at just under 2%. From the graphs it is impossible to tell when Cyprus Airways actually failed as there is no discernible dip in traffic in any particular month.

Ercan flights all go to Turkey; UK, Russia and Greece are top 3 at Hermes Airports

Across all three Cypriot airports the biggest country market according to our analysis of OAG Schedules Analyser data is Turkey, thanks to all flights from Ercan heading for that country. If Ercan is removed from our analysis then the three biggest country markets at Larnaca and Paphos combined are the UK, Greece and Russia. However, using schedule data understates the Russian market which has a significant portion of charter traffic. According to Hermes Airports’ data from 2013, the top three country markets in that year were the UK (22.9%), Russia (19.6%) and Greece (15.6%). No other country accounted for more than 5% of passengers, with Germany and Sweden next with 4.9% and 4.6% respectively. 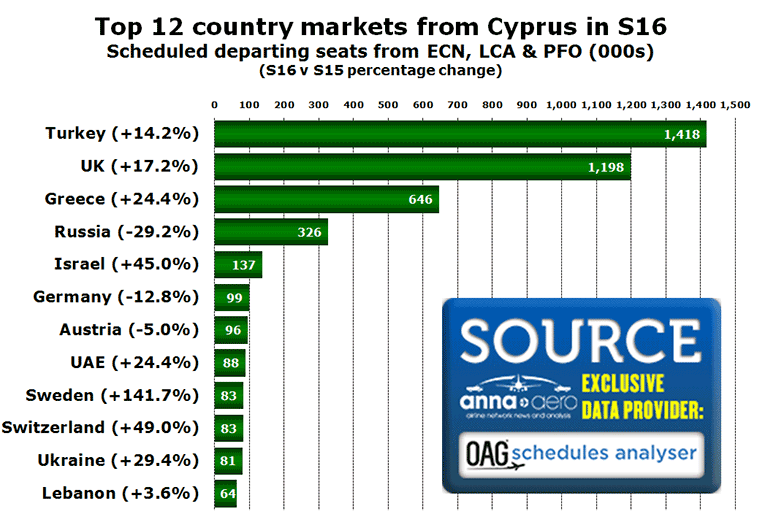 While Germany and the UK are both among the top 12 country markets, Europe’s other biggest air travel generators – France, Italy and Spain – are all conspicuous by their absence. On the other hand, Cyprus’ geographic position in the north-east corner of the Mediterranean means that Israel and Lebanon both appear in the top 12.

Including Ercan in our analysis of the leading airlines in Cyprus results in four of the top 10 carriers being Turkish carriers; Pegasus Airlines, Turkish Airlines, Atlasglobal and Onur Air. Removing Ercan simply removes all the Turkish carriers and delivers a top five now of Aegean Airlines, Thomson Airways, easyJet, Ryanair and Thomas Cook Airlines. 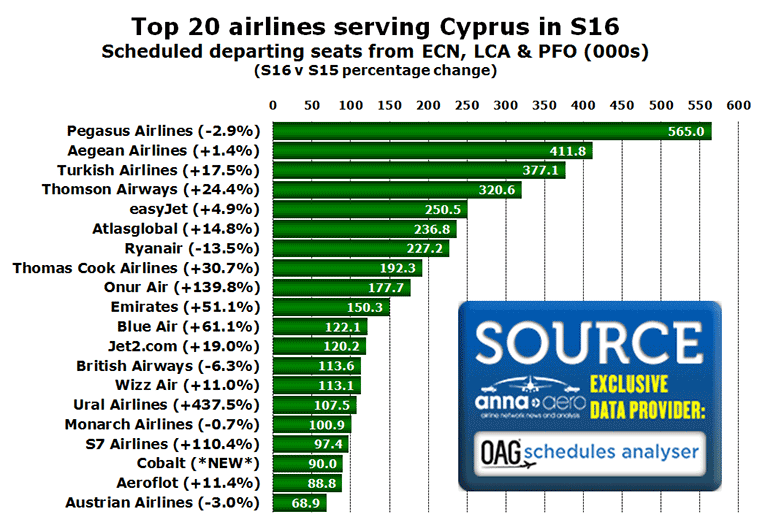 Recently launched new local carrier Cobalt is already ranked 14th at Hermes Airports serving seven destinations from its Larnaca base. Romanian LCC Blue Air also operates a base at Larnaca airport and now has two aircraft stationed there, operating to a total of four destinations (Athens, Bucharest, London Luton and Thessaloniki) with a total of 27 weekly flights. Ryanair’s choice of base in Cyprus is Paphos. The airport became the ULCC’s 50th base in April 2012 with the launch of service to 15 destinations, which rose to 16 the following summer. However, for S14 seven routes were dropped, although daily flights to Athens were added. This was the most recent route launch for Ryanair at Paphos. In total Ryanair has served 21 destinations from Paphos of which nine continue to operate in S16. 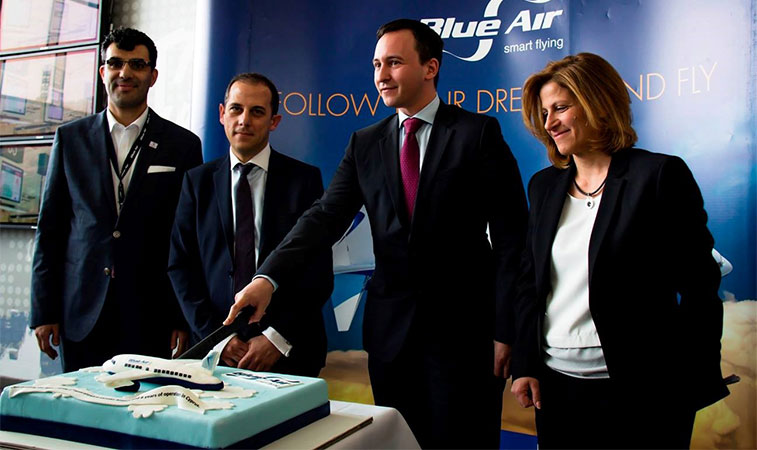 At the start of the S16 season Blue Air based a second aircraft at Larnaca airport. The LCC has been serving the airport since March 2008 and serves four destinations from the airport this summer, including double-daily flights to Athens. The Greek capital is also served by Aegean Airlines and as of 7 July, Cobalt.

Apart from Cobalt’s recent launch to seven destinations from Larnaca, other airlines have also been busy adding services to the Cypriot market. In the last 12 months, notable new services launched include:

In addition several new services have already been announced for S17. 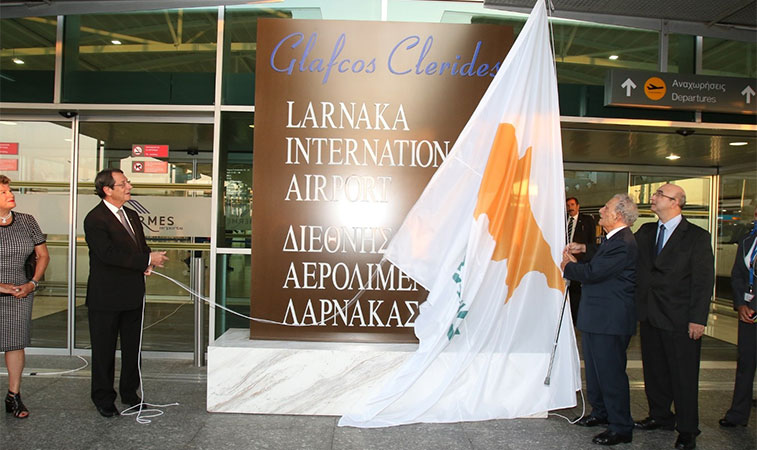 To mark the tenth anniversary of Hermes Airports’ operation of Larnaca and Paphos airports, Larnaca Airport was recently renamed “Larnaka International Airport – Glafcos Clerides” in honour of Glafcos Clerides, who led the country as President between 1993 and 2003.