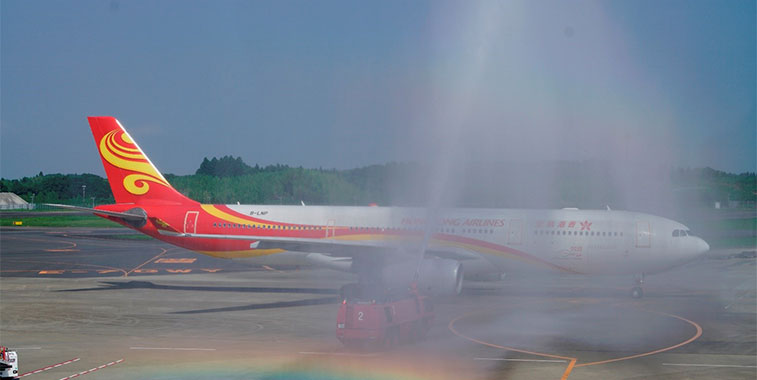 Hong Kong Airlines became the seventh new carrier to serve Tokyo Narita during the past 12 months when it launched twice-daily flights to the Japanese capital from Hong Kong on 1 July. With its twice-daily operation, it is also the largest new carrier at Narita (26th largest carrier overall). An eighth carrier, Hawaiian Airlines, will launch a connection to Narita from Honolulu on 22 July.

Situated over 60 kilometres from the centre of Tokyo, the Japanese city’s Narita Airport lies some 45 kilometres further away from the centre than its Haneda counterpart. According to the Japanese National Tourism Organisation (JNTO), the estimated number of international travellers to Japan in May reached 1.9 million, a 15.3% increase when compared to the same month of 2015, and coincidentally recording the highest figure for May ever. However, the speed of increase in tourists visiting the capital is slowing down according to JNTO. The number of Chinese visitors, with 507,200 in May (up 31.0% on May 2015), reached over 500,000 for two successive months. With this growth, it comes as no surprise to learn that seven of Narita’s nine brand new destinations during the past year are Chinese cities. Besides China’s growth, 17 other countries have recorded the highest figures for May visitors to Japan.

For Q1 of 2016, passenger traffic at Narita is up 6.5%, which is just over 613,000 passengers. Overall for the first five months of 2016, the average monthly increase in passengers is 4.9%. What is interesting to note is that Narita has already witnessed in 2016 more domestic passengers than it did in all of 2011. Domestic traffic between January and May this year was 2.7 million, whereas in all of 2011 it was 1.7 million, representing an increase of 60%. 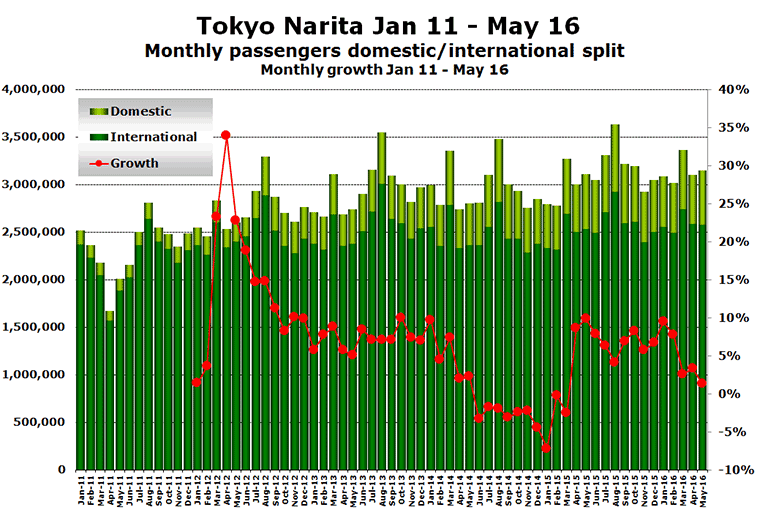 Domestic traffic has grown by five million passengers, from a level of 1.7 million in 2011 to 6.7 million last year, representing an almost fourfold increase. The main driver for this have been the local LCCs serving the airport. Jetstar Japan began operations from Narita in July 2012, while Vanilla Air (which originally operated as AirAsia Japan) launched at the airport in August 2012.

All Nippon Airways remains number one

After reporting a modest increase in seat capacity of 4.5% during the past year, All Nippon Airways remains as the largest carrier from Narita. The second largest carrier, Japan Airlines, has reported an 18% decrease in seat capacity. However, third and fourth placed carriers Jetstar Japan and Delta Air Lines are also showcasing slumps in capacity, allowing the oneworld carrier to maintain its second-placed position. 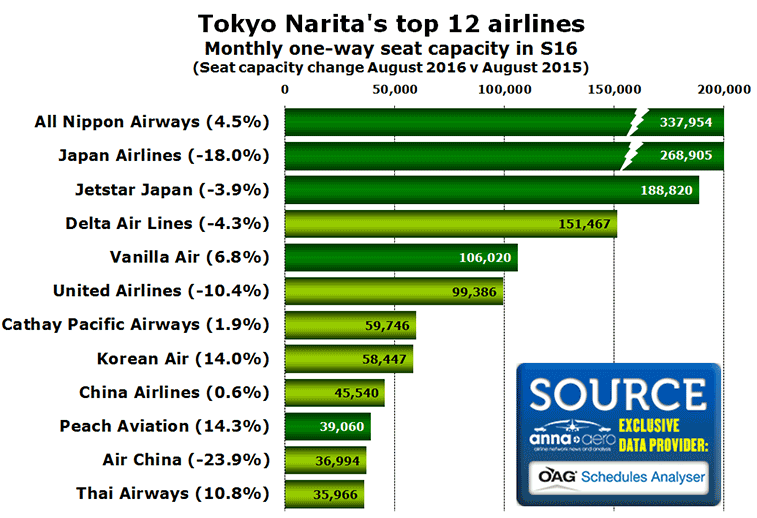 Seven of Narita’s top 12 airlines are non-Japanese carriers (highlighted in light green), with Delta being the largest. Four of them are recording growth in seat capacity this summer when compared to last, with Korean Air (eighth largest) reporting the best growth at 14%.

The next new airline to enter Narita will be Hawaiian Airlines, when it launches flights from Honolulu this week (22 July). Looking forward towards W16/17, the next major development in Narita’s carrier portfolio is the arrival of oneworld member Iberia, with it launching flights from Madrid. Looking further into S16, developments in Narita’s route map include All Nippon Airways launching flights to Phnom Penh on 1 September, while two weeks later Vanilla Air will link the airport to Ho Chi Minh City.

After witnessing a 6.7% increase in seat capacity, Taipei Taoyuan remains the number one route from Narita. China Airlines is the largest carrier on the route, which in total is served by 11 airlines, with China Airlines having 22% of monthly seats. The smallest carrier on Narita’s number one route is Jetstar Japan, with the LCC having just 3.4% of monthly seat capacity in S16. The link is also served by Vanilla Air (16% of monthly seats), EVA Air (11%), Cathay Pacific Airways (8.8%), Scoot (8.7%), Tigerair Taiwan (7.9%), Japan Airlines (7.3%), TransAsia Airways (6.1%), Delta Air Lines (5.0%) and All Nippon Airways (4.7%).

The best performing route for growth in relation to Narita’s top 12 is Seoul Incheon, with it having witnessed a 25% spurt in monthly seats, and propelling it from being the sixth largest route in S15 to second this year. One carrier which has helped spawn this growth is Jin Air, with it having introduced twice-daily 737-800 operated flights on the 1,255-kilometre link on 1 July. In total Incheon is served this summer by seven carriers. t’way air, one of Narita’s newest carriers, has also introduced flights between the two airports during the last year as well. 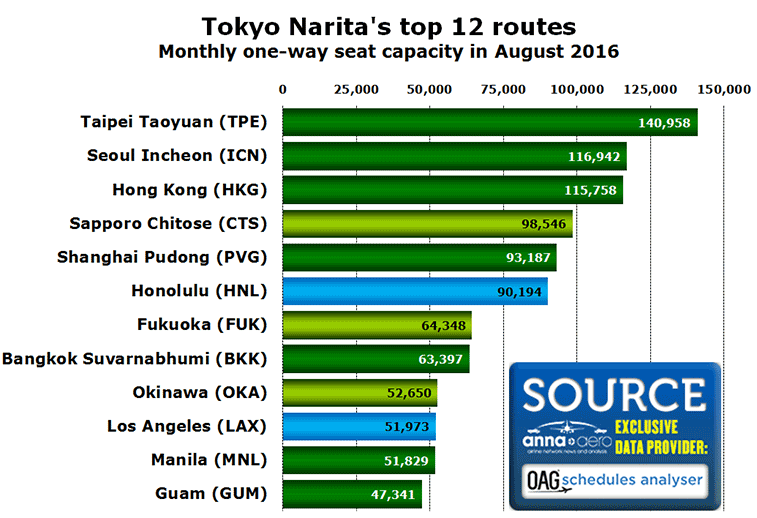 In relation to Narita’s top 12 routes, three of them are domestic connections (highlighted in light green). Of those three, Sapporo Chitose is the largest. It is also the only one of the three in the top 12 to have seen an increase in capacity, with seat availability up 2.8% when compared to last summer. Fukuoka has been hit with a 1.9% decline in seats, while Okinawa, the host of Routes Asia 2017, has seen a 5.1% slump. It should also be noted that the only two non-Asian routes in Narita’s top 12 (highlighted in light blue) are US destinations, with Honolulu seeing a decrease in seat capacity despite the arrival of Hawaiian Airlines competition on 23 July. The top two carriers on the link to Honolulu, Japan Airlines and Delta Air Lines, have both recorded double-digit drops in capacity on the city pair, contributing to the overall capacity decline despite the introduction of a seventh carrier. The oneworld member is reporting an 11% drop, while Delta Air Lines, the largest carrier last summer on the link, is recording a 35% decline. The route is also served by All Nippon Airways, China Airlines, Korean Air and United Airlines.

Overall, of Narita’s 117 non-stop connections this summer, 50 are showing declines in seat capacity. Looking at OAG Schedules Analyser data, the airport has welcomed the following new destinations during the past 12 months: Wuhan (47th largest route), Fuzhou (89th), Brussels (91st) – a route launch which anna.aero attended, Shenzhen (95th), Chongqing (100th), Warsaw (102nd), Xi’an (106th), Harbin (112th), and Changchun (113th). Narita has not lost service to any destination during the past year.

One of seven new carriers to join Narita’s airline portfolio during the past 12 months is Hainan Airlines (seen here at Narita), with it having launched flights from Xi’an, one of nine brand new destinations that have been inaugurated from the Japanese airport since S15. Hawaiian Airlines will become the eighth new carrier this week when it launches flights from Honolulu on 22 July. Looking ahead to W15/16, one stand-out launch is Iberia, which will link Narita to Madrid from October.