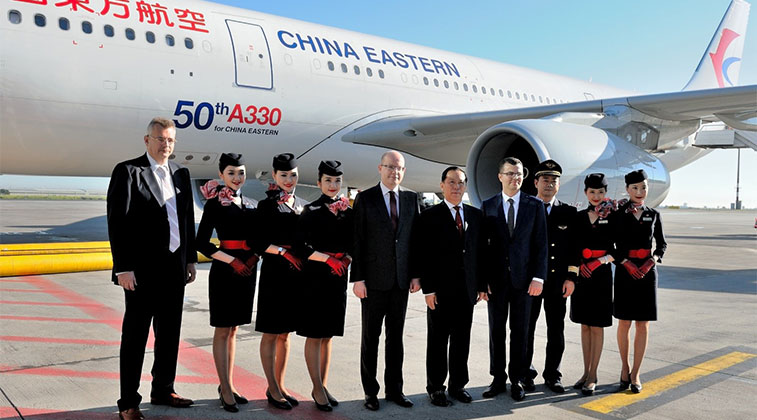 China Eastern Airlines used its 50th A330 to launch service between Shanghai Pudong and Prague in June of this year. Chinese carriers grew their international passenger numbers by 33% in 2015, while domestic growth was just over 9%. In 2016 as well, international growth (+26.1%) is around three times the level of domestic growth (+8.8%).

With dramatic world events elsewhere, concerns about a slowdown in the rate of growth of the Chinese economy seem to have been forgotten about, at least for now. However, if the passenger traffic figures from the Civil Aviation Administration of China (CAAC) are any indication of the state of the Chinese economy, things are still fairly healthy. Last year Chinese airlines saw passenger growth of 11.1%, with international traffic (+33.3%) growing much faster than domestic traffic (+9.2%). However, the international market is still relatively small in passenger numbers compared with the domestic market. The pattern for 2016 is similar. In the first five months of the year passengers carried on local carriers increased by 10.5%, with international growth (+26.1%) almost three times greater than domestic growth (+8.8%). 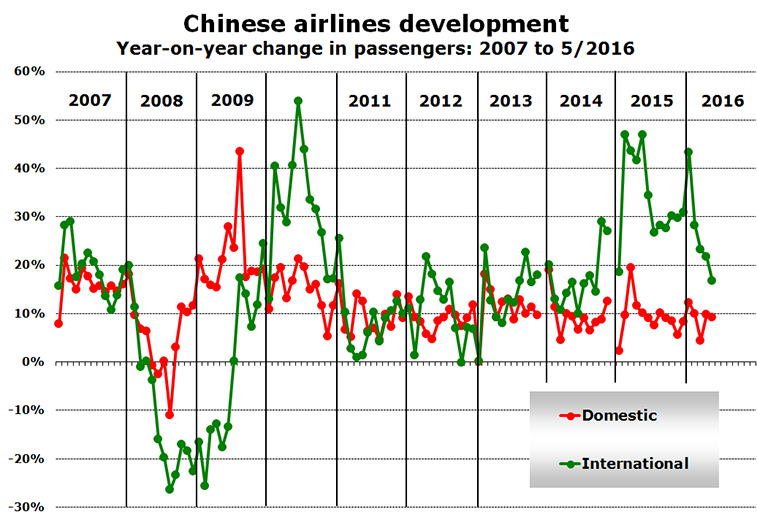 Among China’s top 15 airports eight reported double-digit growth in 2015, with Nanjing (+17.7%), just beating Kunming (+16.8%) and Shanghai Pudong (+16.3%). Beijing’s on-going capacity issues resulted in it being only the 12th fastest-growing among the top 15 airports, with passenger numbers up 4.4% to 89.9 million, leaving it still some way behind Atlanta which reached the 100 million passenger milestone in 2015 (101.5 million to be exact). Dubai in third place (and still reporting double-digit growth) is now closer to Beijing than Beijing is to Atlanta. 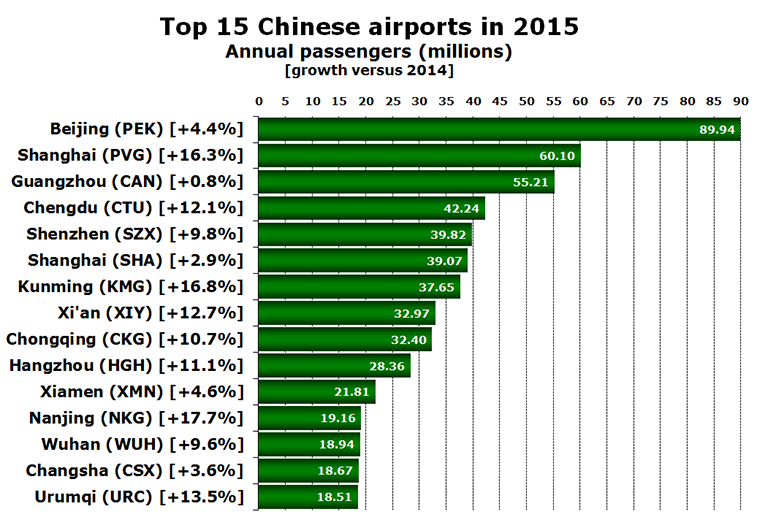 There were some significant changes in the rankings in 2015. Shanghai Pudong passed Guangzhou for second place, thanks to impressive 16.3% growth. However, Shanghai Hongqiao dropped two places from fourth to sixth as both Chengdu and Shenzhen moved up a place to fourth and fifth respectively. Nanjing’s impressive growth of almost 18% saw it leapfrog four places from 16th to 12th with the 20 million passenger mark now a formality in 2016. 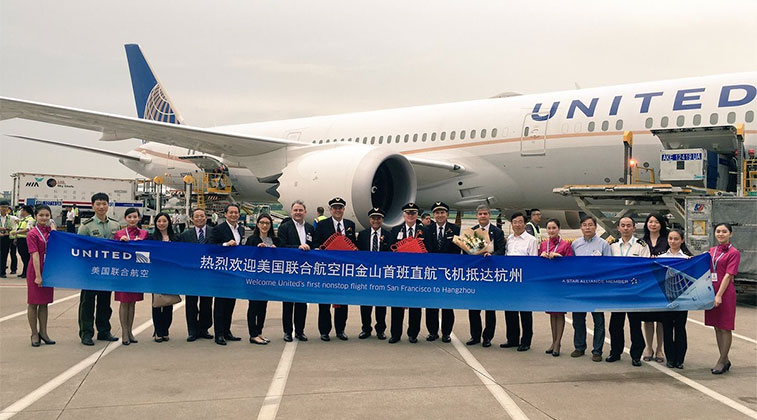 On 13 July United Airlines started non-stop service between San Francisco and Hangzhou. This is the Chinese airport’s first non-stop connection to a US airport. The route will be served thrice-weekly by the Star Alliance carrier’s 787-9s. Hangzhou already has non-stop flights to Europe, with KLM serving Amsterdam and Hainan Airlines operating to Madrid.