NewLeaf takes to the skies of Canada Hamilton Airport celebrated with this cake the start of NewLeaf’s service to Winnipeg. The airline will also link Hamilton to Saskatoon, Halifax, Edmonton and Moncton. Seen giving his thumbs-up to Hamilton’s culinary masterpiece is Dean Dacko, CCO of NewLeaf, who also took charge of ribbon cutting proceedings. Winnipeg Airport celebrated with a NewLeaf coloured cake to mark the start of the carrier’s services from the airport to Hamilton and Kelowna. The new Canadian LCC will also add flights to Victoria and Abbotsford from Winnipeg. Cutting the cake is Jim Young, CEO of NewLeaf, while speaking at the event was Barry Rempel, President and CEO of Winnipeg Airport. 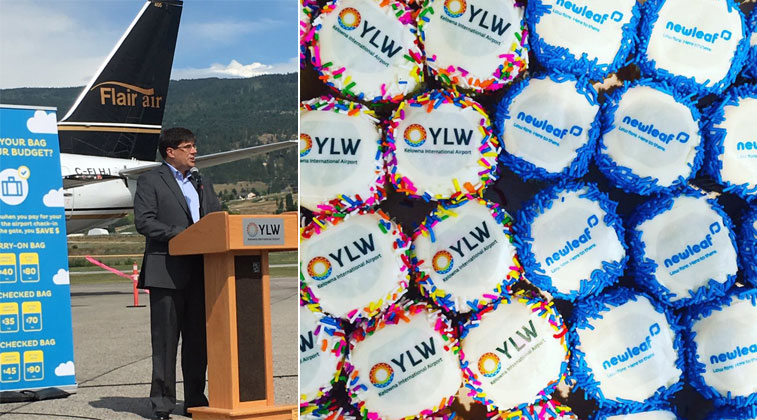 Kelowna Airport had NewLeaf and airport branded cupcakes to herald the carrier’s arrival from Winnipeg. Also speaking on arrival after flying across from Winnipeg is Jim Young, CEO of NewLeaf. The carrier will also link Kelowna to Saskatoon and Regina non-stop. Also being showcased in Regina is a Flair Air 737-400 which will initially be used to operate NewLeaf services.