anna.aero’s TeamBron – Publisher, Paul Hogan, and his son Max – celebrate competing in the 7-kilometre race across the Bosphorus between Asia and Europe. TeamBron, named after Brontë “Bron” Hogan, the publisher’s 12-year-old daughter who lost her five year battle with leukaemia in 2011, raises over $30,000 every year for a range of good causes including the Anthony Nolan child cancer/bone marrow transplant charity.

A total of 1,600 swimmers took part in the race, organised by the Turkish Olympic Committee, which follows a diagonal line between Istanbul’s two Bosphorus bridges, with all maritime traffic stopped for two hours so the race can take place in one of the busiest shipping lanes in the world and the only entrance to the Black Sea.

anna.aero’s Publisher, Paul Hogan, has been vigorously under-training for the race all year, while his son Max, a student of Marymount University VA, didn’t bother to do any training whatsoever, apart from a Spring Break “swimming with the whales and sharks experience” in Cabo.

“This race is extraordinary – despite being in the water with nearly 2,000 others you feel almost alone in the middle of the Bosphorus, passing under the bridges in a stretch of water usually reserved for huge tankers and Russian aircraft carriers” commented the fish-like amphibious publisher. “The water is full of jellyfish – we didn’t get stung but it is unnerving when you collide face-on with the bigger specimens – some as big as beach balls.” 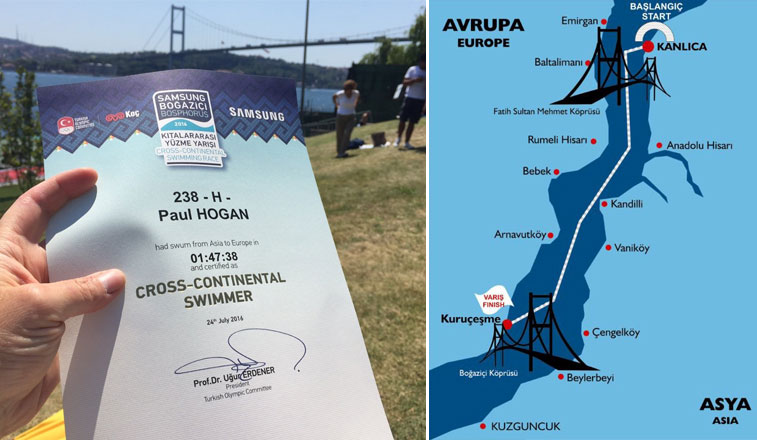 In the race Hogan senior (54) managed a 1 hour 47 minutes, while Max (21) sprinted to the finish in just 1 hour 20. “I was genuinely surprised when after about an hour and a half the finish came into sight – the problem was the current is so strong that it takes another 30 minutes just to cover the last 500 metres to the bank and the finish the shadow of the famous Bosphorus Bridge.”

TeamBron, which is named after Brontë “Bron” Hogan, the anna.aero publisher’s 12-year-old daughter who lost her five year battle with leukaemia in 2011, raises over $30,000 every year for a range of good causes including the Anthony Nolan child cancer/bone marrow transplant charity.

“Turkey’s air transport industry is going through a tough time – we really feel for all our hard working friends and customers among the Turkish airports and airlines who have done so much to create an air transport industry which is genuinely globally important” said Hogan. “Turkey is an amazing country with amazing people and a superb, high quality tourist offer – it deserves success.”

TeamBron’s next major event is as a partner organiser of the anna.aero Budapest Airport Runway Run – the air transport industry’s premier charity-sportive sponsored by Airbus and Qatar Airways – in which some 1,000 industry competitors are expected to take part on 3 September 2016.