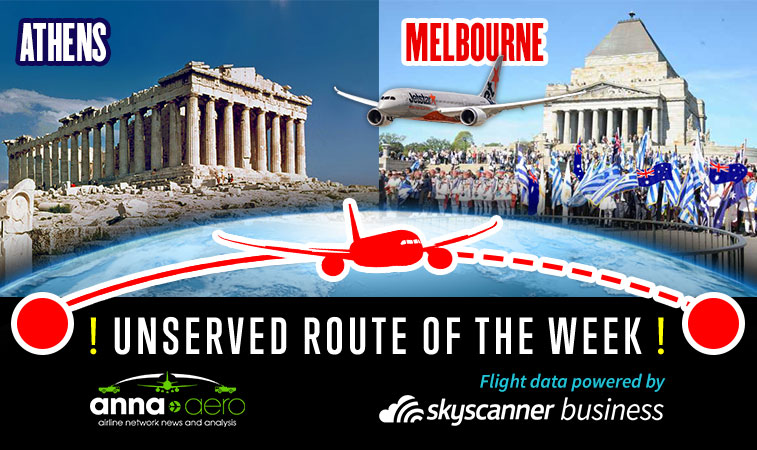 With over 150,000 Greeks, Melbourne is the biggest Greek city in the world – outside of Greece (and even then it’s still the sixth largest Greek city in the world). The image here shows Melburnians celebrating Greek Independence Day at the city’s Greko-style Shrine of Remembrance, which is modelled on the Tomb of Mausolus (Google it). Technically Jetstar’s 787 could fly all the way to Athens non-stop, serving the massive 260,000 demand identified in Skyscanner searches.

With 260,000 searches last year, a potential new route from Athens to Melbourne has been identified as this week’s Skyscanner for Business-anna.aero “Unserved Route of Week” – a powerful kind of analysis based on aspirational data captured from the Skyscanner.net flight comparison site used by +50 million unique visitors per month. “Melbourne and Sydney have always been found among the top indirect routes out of Athens throughout the years, as a result of the high volumes of leisure demand and strong ethnic traffic from second and third-generation of Greeks living in Australia,” says Haris Filos, Developer, Airline Development, Athens Airport. 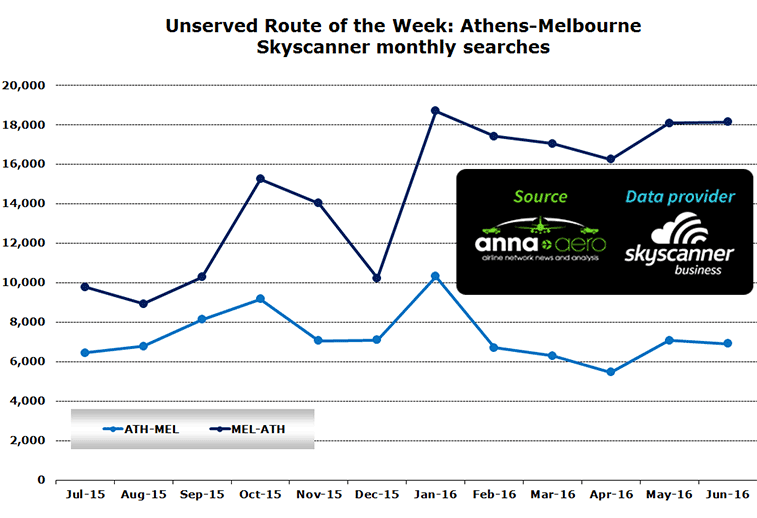 With the traffic on this route indicating a 33/67 split between the two cities, the demand to get back to Greece is likely to drive this potential route, so our data elves considered the probable Australian carriers for this city pair. Qantas is currently the largest carrier (30% share) at Melbourne in terms of weekly capacity, according to OAG schedules data for the week commencing 21 July. However, with the airline directing all of its Kangaroo traffic via Dubai these days – indeed, it only flies its own aircraft to London Heathrow in Europe ‒ the possible service is perhaps best left to its domestic nemesis Virgin Australia Airlines (24% share at MEL) or its in-house LCC Jetstar Airways (18% share).

Jetstar does at least have the equipment to fly direct from Australia to Greece, as it already operates seven non-stop routes from Melbourne with its 787s – Denpasar (nine times weekly), Singapore (five), Phuket (four), Tokyo Narita (three) Honolulu (three), Bangkok Suvarnabhumi (two) and Cairns (one). While the sector to Hawaii does allow the 787 to stretch its legs at 8,871 kilometres, the near 15,000-kilometre route to Athens would be more operationally challenging, especially as the world’s longest 787-8 route is currently 11,838 kilometres, flown by Air Canada between Vancouver and Brisbane according to OAG Schedules data. Like Jetstar, Virgin Australia does fly international long-haul services, with daily flights from Brisbane and Sydney to Los Angeles, but again none to Europe. Given the distance to Athens, its 777-300s would have to stop en-route, putting it in direct competition with the existing one-stop solutions.

Considering the Greek end of the route, the only local carrier which could possibly muster an operation of this magnitude is Aegean Airlines. However, with its mix of nearly 50 Airbus narrow-bodies, taking on this route is at least five years away, or however long it would take to acquire the right equipment for a long-haul service.

When looking at the previous year of search data, the busiest month for potential traffic flows (for both directions on the route combined) is January 2016, with over 29,000, more than 13,000 higher than the lowest monthly figure, which was recorded in August 2015 (15,700). The seasonality profile of this search data is less extreme than last week’s Unserved Route of the Week (Los Angeles to Buenos Aires), with the low-month traffic representing 54% of the highest month. According to OAG Traffic Analyser, because there is no direct service, the top three connecting options chosen by those passengers who did book travel between Athens and Melbourne in the past year indicates a titanic tussle between the hubs of the MEB3 airlines (Emirates, Etihad Airways and Qatar Airways), with nearly 90% of travellers using Doha (35%), Abu Dhabi (30%) or Dubai (21%). Looking at the traffic flows in reverse, from the Australian end, Abu Dhabi is #1 (38%), ahead of Doha (31%) and Dubai (19%). 18 different connecting hubs were used by passengers looking to travel from Athens to Melbourne, whereas in reverse 17 different airports were used. However for Australia-bound passengers, outside of the top four airports (Singapore was fourth in both directions), the rest of the traffic hubbed via Asia, but for Greece-bound travellers European hubs were used more often.

With a lack of direct services, travellers between these two cities have clearly got used to one-stop alternatives – as suggested above. However, the market is extremely buoyant – as the graph below shows, 11% of the Skyscanner searches for these indirect Athens to Melbourne services converted into ticket sales – that’s more than the 10% achieved for Skyscanner conversion/purchase rates for all direct routes available from either Athens or Melbourne. 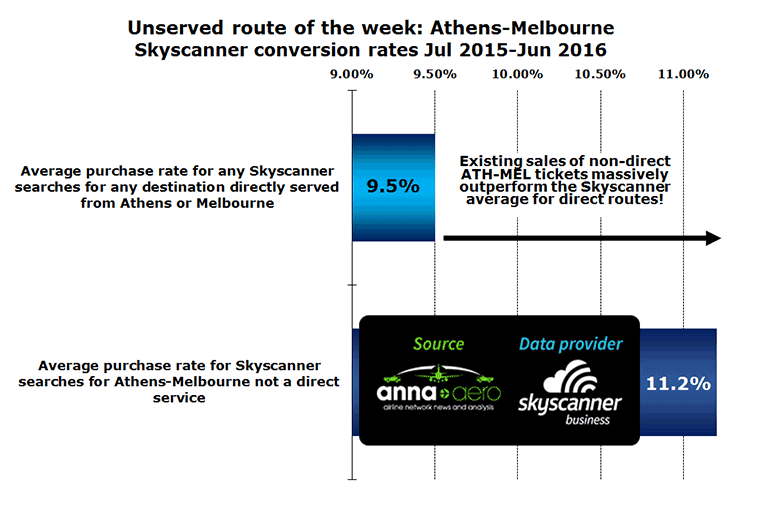