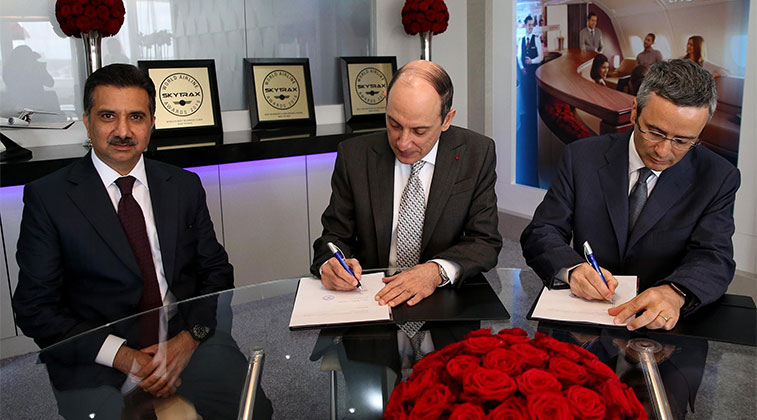 On 14 July Qatar Airways said it would purchase a 49% stake in Italy’s Meridiana, days after it announced plans to buy 10% of LATAM Airlines Group, as the Gulf carrier continues to expand its global network by investing in other airlines. Earlier this year the oneworld carrier announced that it would increase its 9.99% stake in IAG – the parent company of Aer Lingus, British Airways and Iberia – to 15%. “This agreement [to purchase 49% of Meridiana] sets the path to progress our work towards a strong resolution that benefits both the staff and passengers who travel with Meridiana,” said Qatar Airways’ CEO Akbar Al Baker. Qatar Airways is not the only MEB3 carrier to make investments like this in European carriers. Abu Dhabi-based Etihad Airways owns a 49% stake in Alitalia, and is looking to turn around Italy’s largest carrier, with it also having stakes in Air Serbia (49%), airberlin (29%) and Darwin Airline (34%), with the latter better known nowadays as Etihad Regional. So with Etihad owning 49% of Alitalia – Italy’s largest home carrier, and Qatar agreeing a purchase of 49% in Meridiana, could Emirates be looking at a 49% stake in Italy’s third largest home carrier? anna.aero’s data elves think that Blue Panorama Airlines (third largest Italian carrier; 12th largest overall in Italy) will not see any Emirates investment soon…but never say never.

Looking at the carrier’s schedules data for August 2016, the majority of its seats are on its Italian domestic services (59% of monthly seats). The 41% of seats not used on Italian domestic routes are spread across its remaining 18 country markets. 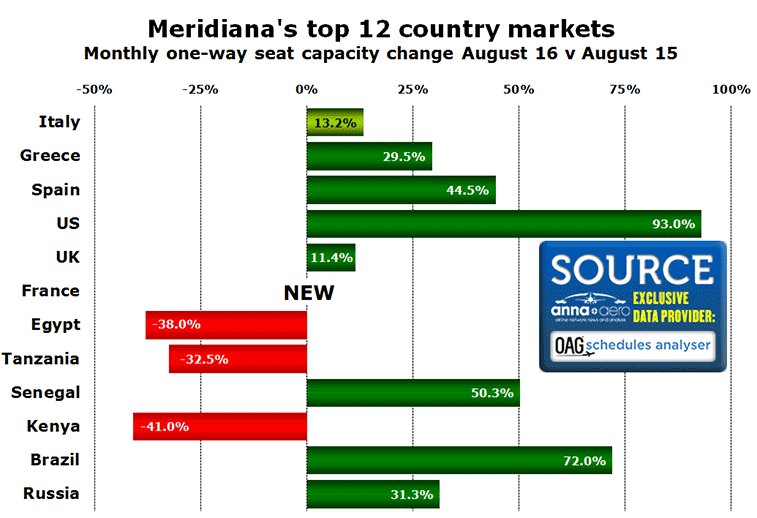 With the Italian domestic market accounting for 59% of overall seats, it comes as no surprise to see it as the carrier’s number one country market (highlighted in light green). One major change to the top 12 is the introduction of France, a new market for Meridiana during the past 12 months. The airline currently links Olbia to Paris CDG, Marseille and Nice, while Cagliari is also linked to the French capital airport. Schedules data shows that the link between Olbia and Paris launched in April, while the remaining two routes from the Sardinian airport launched in June, with the final of the four routes launched within the past few weeks.

In relation to the carrier’s existing markets, it is the US (fourth largest) which has grown the most. The reason for this growth is due to the carrier doubling its frequency on the link between Naples and New York JFK from four times weekly to daily. The carrier also links Palermo in Sicily to JFK. What should be noted is that Emirates is the only MEB3 carrier to operate a fifth freedom route between Europe and the US, which is coincidentally from Italy, with the Dubai-based operator linking Milan Malpensa to JFK. With this, we could see Qatar try and use its own metal between Italy and the US and utilise Meridiana’s fleet on other routes. However, Etihad has not done this with its Alitalia counterpart, so this may not happen.

Looking at Meridiana’s top 12 routes, only one (highlighted in light green) is an international service, the airline’s connection between Naples and New York JFK. Meridiana’ top 12 routes account for 40% of all available seats in its network, further strengthening the importance of the Italian domestic market to the carrier. The airline’s number one route, between Olbia and Milan Linate, accounts for 9.9% of monthly seats. The airport pair is currently flown by Meridiana 53 times weekly based on OAG schedules, up from 49 in S15. 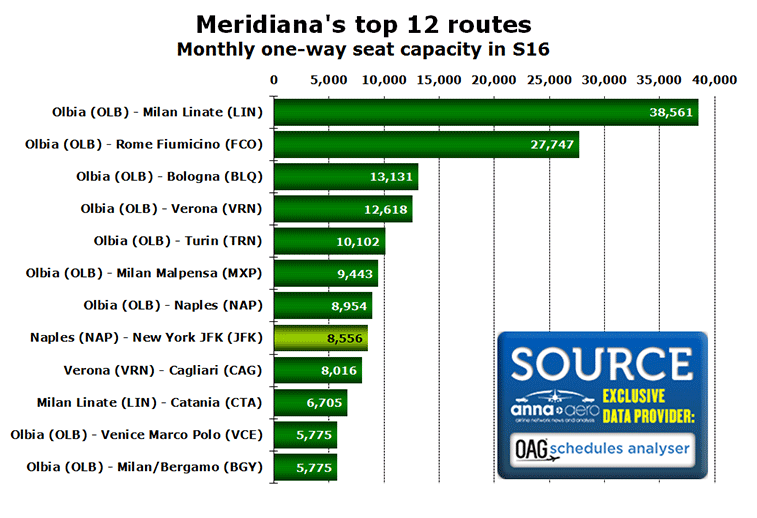 Smidge of long-haul in network

Looking at OAG Schedules, only 4.5% of Meridiana’s seat capacity is dedicated to its long-haul operations, with New York JFK making up 47% of those seats. The carrier also serves: La Romana in the Dominican Republic; Fortaleza and Natal in Brazil; Lagos in Nigeria; Accra in Ghana; Nosy Be in Madagascar; Mauritius; Mombasa in Kenya and Zanzibar in Tanzania. These destinations are all served from Milan Malpensa, with the latter two destinations also linked to Rome Fiumicino.

Of the 53 airports which Meridiana operates from 20 (38% of airports) are in Italy, with only three of the carrier’s top 12 airports being international facilities (highlighted in light green below). Of those airports, Olbia – the carrier’s home base – is the largest, with it occupying just over 24% of monthly seats, down from 25% in S15. Although Olbia’s seat majority is less than what it was last summer, its overall seat capacity has increased by nearly 18%, with just under 160,000 monthly seats on offer in S16. The largest international airport in Meridiana’s network is Ibiza, with it having 2.3% of Meridiana’s monthly seats, up from 1.8% last summer. Overall capacity to Ibiza has grown by 56%, with just over 5,000 more monthly seats on offer to the Balearic Island this summer when compared to last year. The best performing Italian airport for growth is Naples, with seat capacity to the nation’s third largest city up just over 41%, allowing it to overtake Milan Malpensa. During the past year, the carrier has commenced links from Naples to Menorca, Palma de Mallorca, Milan/Bergamo and St. Petersburg, while flights to Athens and Zakinthos have ended. 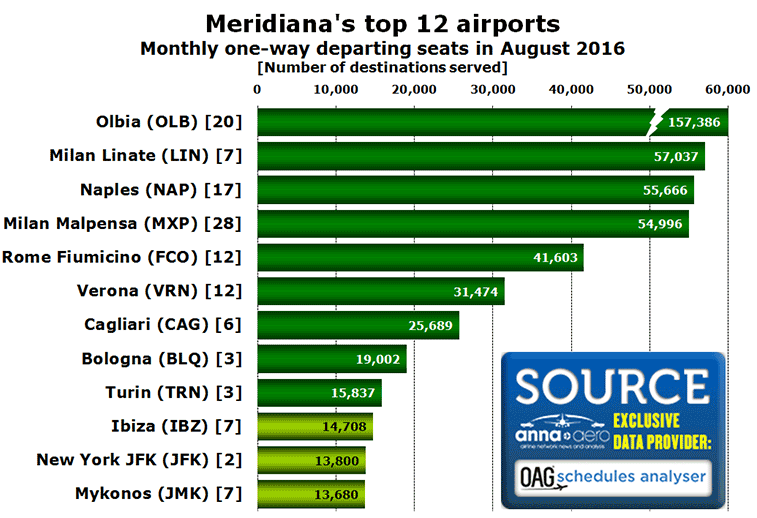 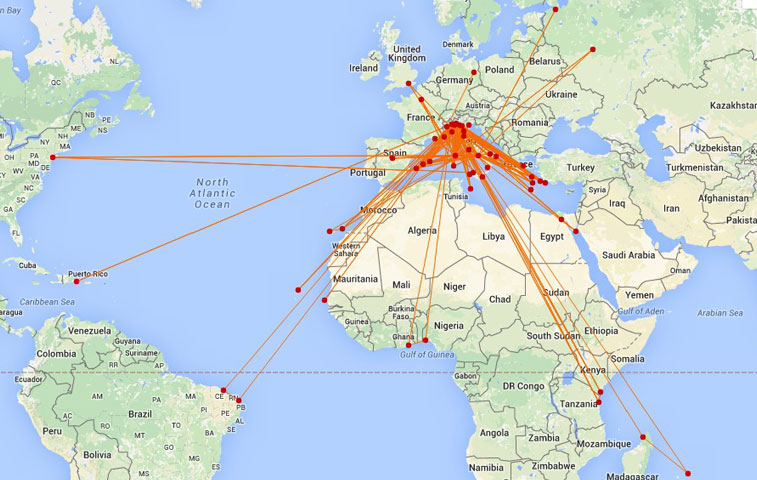