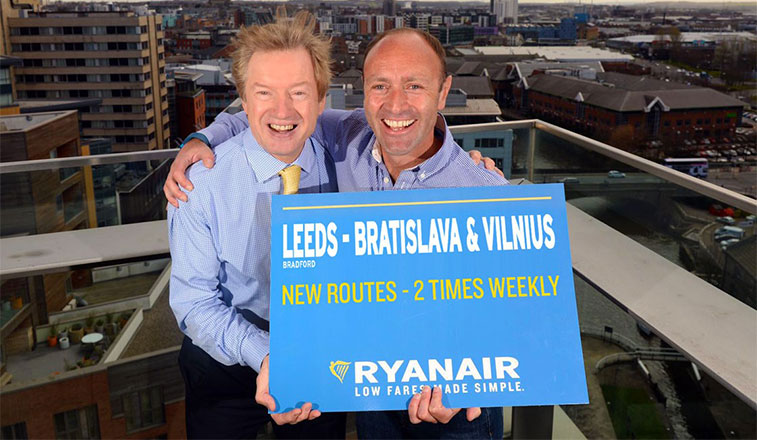 Ryanair recently announced that it will launch routes from Leeds Bradford to two European capitals for the start of W16/17, Bratislava and Vilnius, both of which will be flown twice-weekly. As well as the capitals of Slovakia and Lithuania, Leeds Bradford will gain connections to the capitals of Poland and Germany, with Ryanair launching Warsaw Modlin on 30 October, while Jet2.com will commence a twice-weekly service to Berlin Schönefeld on 25 November for the Christmas period, with it returning on 7 March for a full summer season, again at a twice-weekly frequency.

The government district of the City of Leeds has a population of 774,060 based on mid-2015 statistics by the UK’s Office for National Statistics, while Bradford has a population of 531,176. With these figures, the City of Leeds’ population is the second largest in the UK after Birmingham, while Bradford is fifth, ahead of Manchester (all based on government district boundaries). Based on the UK’s 2011 census, the population of Yorkshire and the Humber combined was 5.3 million, an increase of 6% when compared to the 4.9 million of 2001.

Based on 2015’s UK airport passenger statistics, Leeds Bradford ranks as the 15th largest (3.44 million), ahead of Aberdeen (3.43 million) but behind Liverpool (4.29 million). Of the 254 million passengers to fly from the UK last year, 1.4% chose Leeds Bradford as their airport of choice. To put this into perspective, nearly 30% flew from London Heathrow. Looking at the year-on-year comparison between 2015 and 2014 passenger statistics, Leeds Bradford was the UK’s 17th fastest growing airport, with traffic up 5.6%  when compared to 2014. The UK average for 2015 was 2.8% – based on the 37 UK airports with 100,000+ passengers (overall UK traffic was up 5.5%). This means that Leeds Bradford grew faster than some of the nation’s larger airports including: Manchester (5.2% growth; UK’s third largest airport); Birmingham (5.1%; seventh); Heathrow (2.2%; first); Newcastle (1.0%; tenth) and East Midlands (-1.3%; eleventh). However, it is Leeds Bradford’s nearest rival Doncaster Sheffield that witnessed the best growth of any UK airport, with traffic up over 18% in 2015. Although in percentage terms Doncaster Sheffield grew faster than Leeds Bradford, the latter still welcomed 50,000 more additional passengers in 2015 than its Yorkshire counterpart.

Traffic up 26% since the turn of decade

During 2010, Leeds Bradford welcomed 2.7 million passengers. Last year the Yorkshire airport welcomed over 3.4 million, representing an increase of 26% during the time period analysed. Looking at the 64-month period analysed between January 2010 and April this year, 15 of those months witnessed a decrease in traffic (highlighted in light green), with last November being the last month to witness a slump, with passenger traffic down 3.3%. Only four of the 15 months where traffic went down witnessed double-digit drops: October 2011 (10.3%); November 2011 (10.3%); January 2012 (12.5%) and March 2014 (10.3%). On the other hand, 14 months noticed double-digit growth, with the time period from May 13 – November 13 seeing every month witnessing this feat. 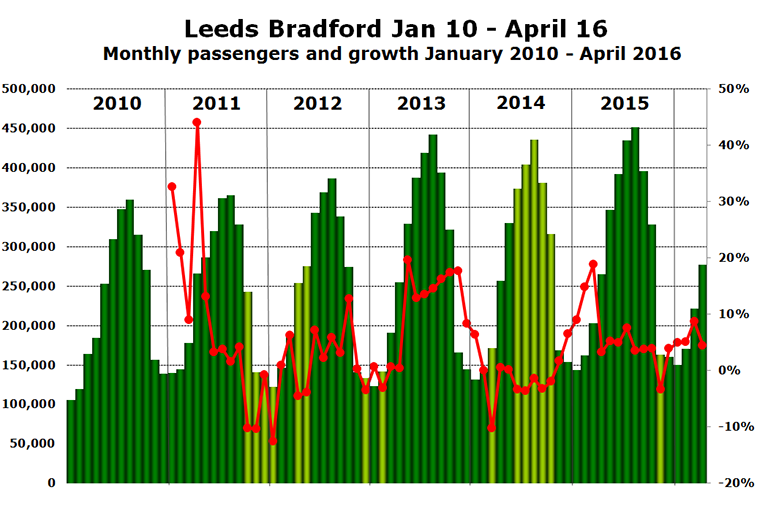 For the first third of 2016, traffic at Leeds Bradford is up 5.8% when compared to the first four months of 2015, which in relation to figures is 45,000 additional passengers. If this rate of growth was to continue throughout all of 2016, then Leeds Bradford is on track to hit over 3.6 million passengers in 2016. Entering Leeds Bradford’s monthly passenger data for 2015 into anna.aero’s Seasonal Variation in Demand (SVID) calculator, the airport performs not so well, with it garnering a score of 18.47 – a ‘Poor’ rating. However, this has improved from that of 2013, where it achieved a score of 19.43. The fluctuation in the airport’s seasonality is visually evident in the graph above.

After witnessing an increase in seat capacity of 11%, Palma de Mallorca retains the title of being Leeds Bradford’s number one route. This summer the Spanish airport is served by four carriers from Leeds Bradford, with Jet2.com being the largest airline with nearly 49% of monthly seats, followed by Ryanair (24%), Monarch Airlines (9.3%) and Thomson Airways (17.8%). Jet2.com is the largest carrier on eight of the airport’s top 12 routes, while Ryanair is the second largest on seven of the top 12, with the Irish LCC having the majority of capacity on the airport’s connection to Dublin (74%; fifth largest route). 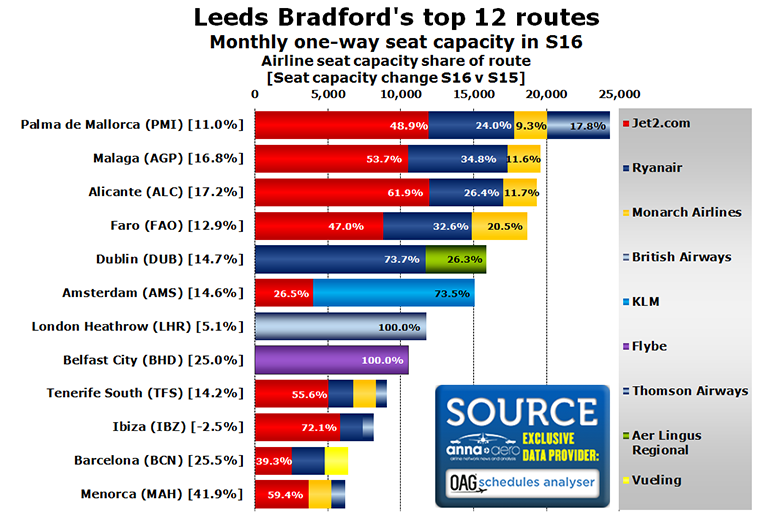 Only two of Leeds Bradford’s top 12 routes see a monopoly, that being the British Airways connection to Heathrow (seventh), which has seen capacity grow by 5.1%, while the other is Flybe’s link to Belfast City (eighth), a route which has grown by 25%, helped by the regional airline adding a fifth-daily service in July.

Outside of the top 12, 20 routes have witnessed capacity cuts, with the biggest casualty being Antalya (39th largest route; down 52%). It should be noted however that due to political issues in Turkey, airlines across Europe and indeed the world have scaled back their operations to the nation. Leeds Bradford has also seen reductions to Dalaman (14th; down 33%) and Bodrum (40th; 13%). On the other hand, as a result of the drops in capacity to Turkey, other Mediterranean destinations are booming from Leeds Bradford, with routes including Zakinthos (up 63%), Kos (59%), Paphos (46%) and Gran Canaria (35%) all seeing strong gains in seats. Overall seat capacity from Leeds Bradford in S16 is up 6.3% when compared to S15.

During the past 12 months, Leeds Bradford has welcomed two brand new destinations to its route map, namely Cork and Guernsey. Of the 58 non-stop destination served from the airport this summer, Cork is the 51st biggest with Guernsey one place behind. Although the Yorkshire facility has gained these new links, two other destinations have been culled from the departures board, with Dinard (Ryanair operated) in France and Enfidha (Jet2.com and Thomson) in Tunisia no longer seeing direct flights.

For the upcoming winter season, Leeds Bradford will gain connections to four European capitals. Jet2.com will commence a twice-weekly service to Berlin Schönefeld on 25 November for the Christmas period, with it returning on 7 March for a full summer season, again at a twice-weekly frequency. Ryanair will link the Yorkshire airport to Bratislava, Warsaw Modlin and Vilnius. With these new connections, Leeds Bradford will be connected to 12 European capitals by the end of 2016, with Dublin being the largest capital connection.

Increasing its seat capacity from Leeds Bradford by 4.6% during the past year, it is home airline Jet2.com that maintains the number one carrier position at the airport. Looking at the carrier’s S16 programme, it will operate one less route this summer than it did last year, with it dropping its route to Enfidha. The last new route the carrier launched from Leeds Bradford was Kefalonia in June last year. 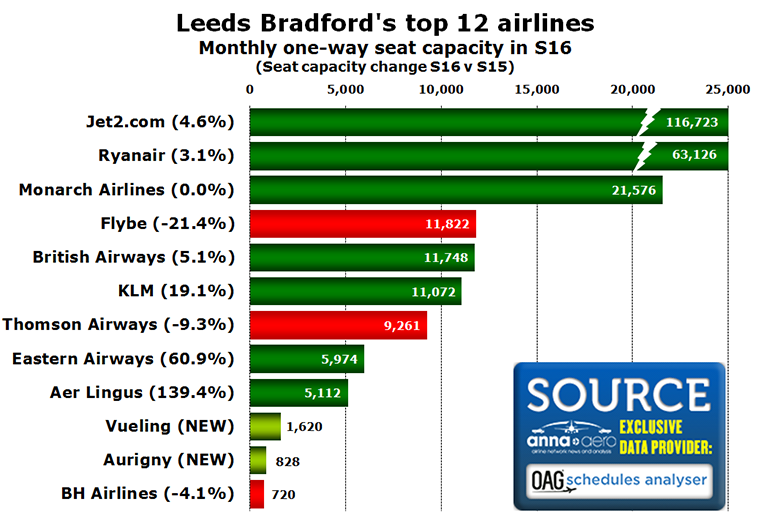 Although this summer Leeds Bradford is served by four carriers, it should be noted that in winter season easyJet offers a four times weekly service to Geneva. Two new airlines (highlighted in light green) have been added to the roll call of carriers at the airport this year. Vueling has added flights from Barcelona, while Aurigny commenced operations from Guernsey. Of the existing carriers, three (highlighted in red) have shrunk operations from Leeds Bradford. Flybe has reduced seat capacity by over 21%, despite its growth to Belfast City. This is due to the airline ending its Aberdeen – Leeds Bradford – Southampton – Jersey shuttle service. However the airline will add capacity in winter when it launches flights to Newquay, a route which the airline already offers from Doncaster Sheffield this summer. In relation to growth, Aer Lingus Regional is the best performing carrier, up 139%. This is a result of the airline adding a connection to Cork this summer, a route which Tony Hallwood, Aviation Development Director of the UK airport, celebrated at this year’s CONNECT conference in Vilnius, a city which will link to Leeds Bradford this winter.

As well as new routes mentioned already, Ryanair will add flights to Gran Canaria for W16/17, while it will also add service to Girona for the start of S17. Meanwhile the airport’s largest airline will add routes to Almeria, Girona (competing with Ryanair), Naples (competing with Monarch) and Thessaloniki next summer. While for W16/17, Jet2.com will link Leeds Bradford to Grenoble in France. 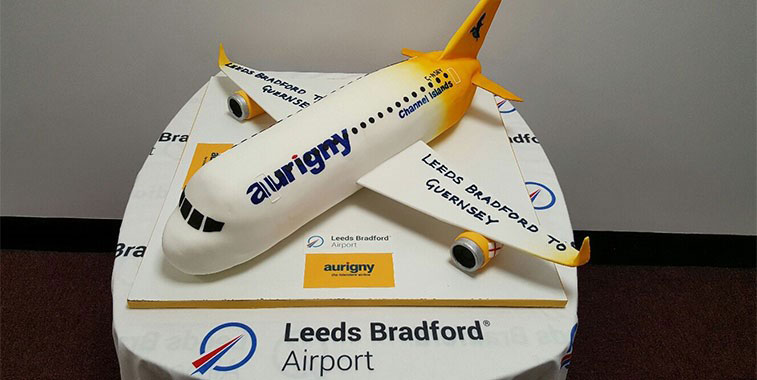 The latest carrier to join Leeds Bradford was Aurigny, which launched flights from Guernsey on 27 May, with the Yorkshire airport heralding its arrival with this fantastic cake. As well as Aurigny, Vueling is a new carrier to the airport’s roll call (launching at the start of S16), with it adding service from Barcelona. Both carriers have helped grow Leeds Bradford Airport’s overall seat capacity for S16 by 6.3%.