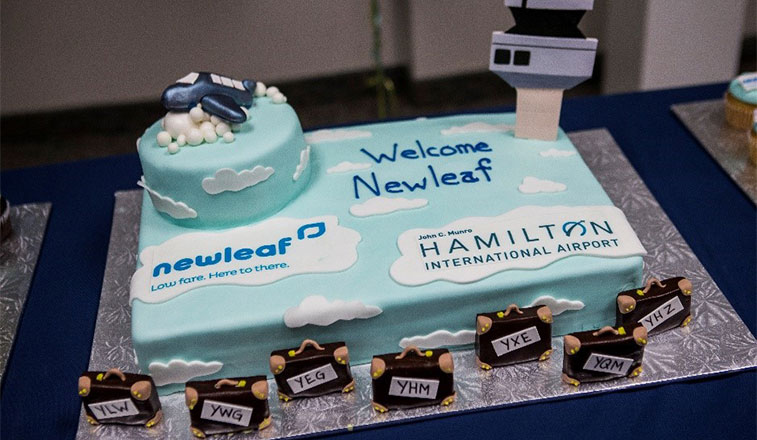 Hamilton Airport celebrated the start of NewLeaf operations with this fantastic cake. NewLeaf links Hamilton non-stop to Edmonton, Halifax, Moncton, Saskatoon and Winnipeg with a total of 11 weekly flights (based on airline’s schedule), with Halifax being one of four routes in NewLeaf’s network to face direct competition from WestJet, which offers daily flights on the route.

According to its website, NewLeaf is an airline that: “Wants to spread the love to Canada’s smaller airports because of their laid back atmosphere, cheaper parking and awesome baggage handling. Plus, their lower fees keep more money in the bank for you.” Its first flight commenced on 25 July, a link from Hamilton to Winnipeg. The airline is described as Canada’s first ULCC, with this being stated on the airline’s website. Currently the carrier does not have any of its own fleet, with flights being carried out by its partner ‘white label’ airline Flair Air. Operating since 2003, Flair Air currently has a fleet of five 737-400s which it uses on NewLeaf’s routes, with the average age being 25.5 years. It also has one Dornier 328 and one E175. Below shows NewLeaf’s currently flying schedule and when the route was launched.

Looking at the carrier’s network, it will see a major focus of its operations at Hamilton (five destinations), Winnipeg (four) and Kelowna (three). Most of the airports which NewLeaf operates to are in British Columbia (four airports), followed by Saskatchewan (two). The airline currently has no scheduled flights to Quebec. One thing that is very evident from the 13 non-stop services which NewLeaf flies (it does allow for people to purchase one-stop tickets e.g. Hamilton to Kelowna via Winnipeg), it will not operate any flights on a Tuesday. Looking at the airline’s timetable, Sundays are the biggest day of operation (six flights) followed by Saturdays and Wednesdays (five), while Mondays, Thursdays and Fridays all see four flights. What should be noted is that for Allegiant Air, an ULCC based in the US, Tuesday is also its quietest day of operation, with only 3.8% of the American carrier’s weekly flights operating on that day (based on OAG data w/c 2 August). The busiest days of the week for Allegiant Air are Mondays, Fridays and Sundays (19% of weekly flights on each day).

Of the 13 routes, only two will fly thrice-weekly, with the rest only seeing a twice-weekly operation. From these routes, four will face direct competition from Canada’s largest LCC WestJet, with the link between Edmonton and Abbotsford seeing the biggest battle with WestJet, which offers a twice-daily service (one flight on Saturdays) on the sector. Two of WestJet’s competing routes were coincidentally launched this week, with Hamilton to Edmonton starting on 29 July (four times weekly), and Winnipeg to Kelowna commencing on 28 July (thrice-weekly).

Looking at the airline’s current route network map (shown below), it shows Fort St. John in British Columbia as a destination with connections to Abbotsford and Edmonton evident. As yet though, Fort St. John is not bookable on NewLeaf’s website. However if these two services do come to fruition, it should be noted that the Edmonton connection is already flown by Central Mountain Air. 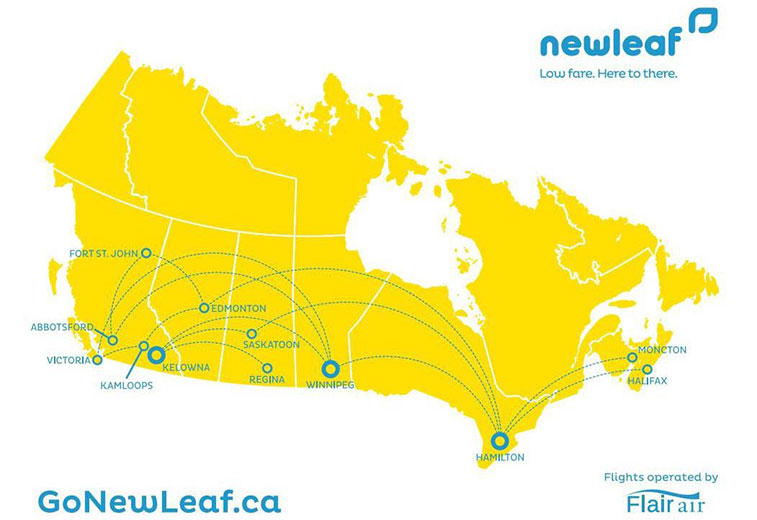 NewLeaf route map August 2016. The carrier has three main operational bases in Hamilton, Kelowna and Winnipeg. This map shows 12 destinations, however the carrier only flies to 11 of them at present, with Fort St. John in British Columbia seeing no flights at this time. This map shows the Canadian city being connected to Abbotsford and Edmonton, but as yet no flights are bookable.