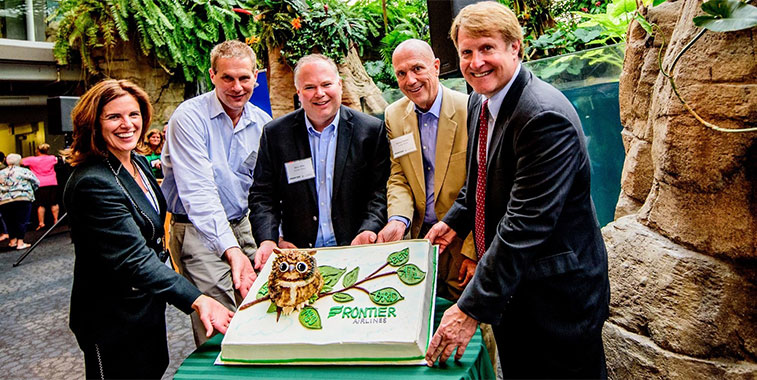 Frontier Airlines has grown its domestic capacity by around 25% this summer as its network continues to expand. In mid-June the ULCC began operations from Pittsburgh Airport, an event marked by a special cake featuring one of the airline’s famous tailfin animals, Otto the Owl. Fellow ULCCs Allegiant Air and Spirit Airlines have also grown their summer seat capacity by around 25% this summer.

The latest passenger data from the US DOT Bureau of Transportation Statistics shows that in the first four months of 2016 scheduled domestic enplanements are up 4.5%. In 2015 as a whole domestic enplanements were up 5.0% to just over 696 million. This finally broke the previous record set back in 2007 of just over 679 million passenger movements. In November 2015 and February 2016 the year-on-year growth exceeded 8% for the first time since anna.aero began collecting US DOT data way back in 2007. Admittedly, February 2016 benefitted from an extra day without which the growth rate would have been close to 5%. Domestic traffic has now grown for 26 straight months, again, something that has not been achieved for over a decade. 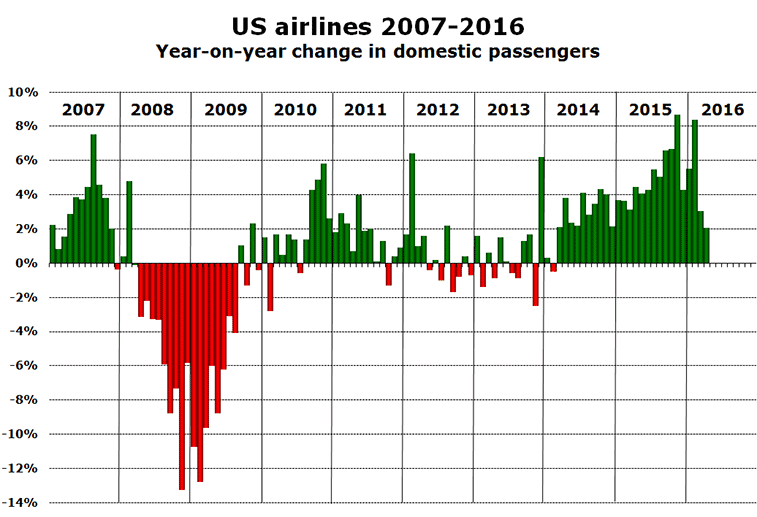 Analysis of OAG schedule data for this summer and comparing it with last summer suggests that domestic capacity growth will be around 7%. All of the top 12 US domestic airlines are registering capacity growth compared with last summer, ranging between a modest 4.3% at American Airlines and between 24% and 25% for the country’s three ULCCs; Allegiant Air, Frontier Airlines and Spirit Airlines. In terms of ranking, the only change compared with last summer is that Allegiant Air has now moved past Hawaiian Airlines into ninth place. 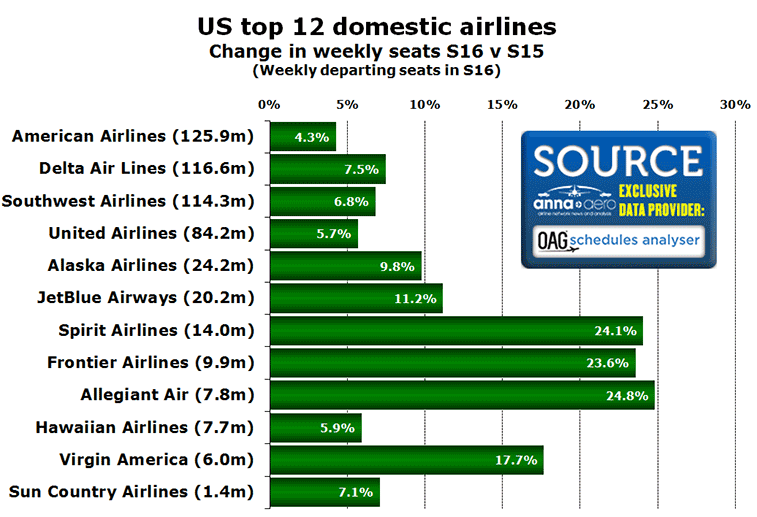 Source: OAG Schedules Analyser for S16 and S15. American Airlines figures include those of US Airways in 2015.

International seats to/from US up 8.5% this summer

The number of passengers on international flights operated by US airlines passed 100 million for the first time in 2015, growing 2.3% to 102.2 million. In the first four months of 2016 the rate of growth has risen modestly to 3.4%. So far international traffic has grown every month of the year. The last time that there was growth in every month of a complete year was back in 2007. Since then there has always been at least one month which showed a year-on-year traffic decline. 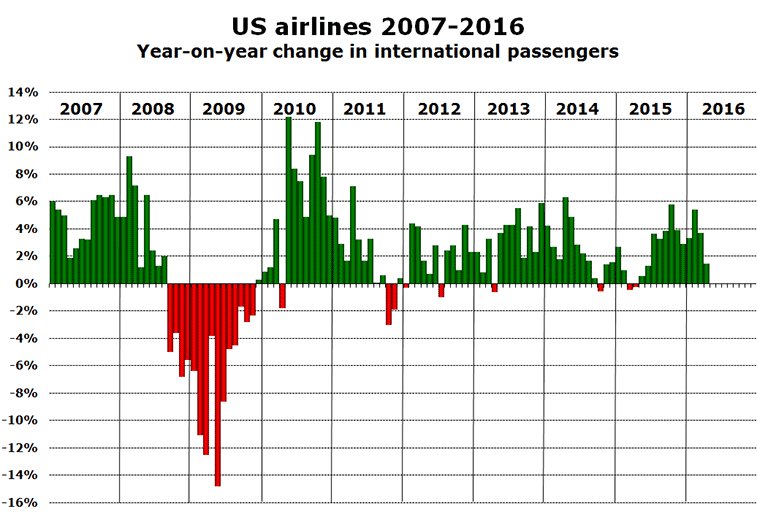 Analysis of OAG schedule data for this summer and comparing it with last summer suggests that international capacity growth across all airlines (not just US ones) will be around 8.5%. Of the top 16 airlines to serve the US market (as measured in seats across the whole summer period), none are indicating a reduction in seat capacity. Six of the top 16 airlines are reporting double-digit growth, of which two are US carriers. Southwest Airlines has been rapidly expanding its international network (+30%). Of the other four fast-growing airlines, two are based in Canada (Air Canada and WestJet) and one each in Mexico (Volaris) and UAE (Emirates).

Emirates, currently ranked 10th, passed Air France and Aeromexico during the last year, and could easily overtake Virgin Atlantic Airways and WestJet to become the eighth biggest carrier operating international services to and from the US. 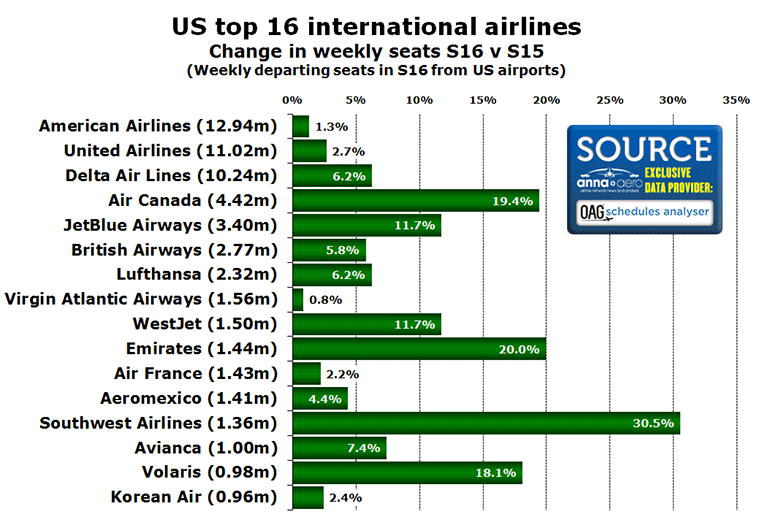 Source: OAG Schedules Analyser for S16 and S15. American Airlines figures include those of US Airways in S15. 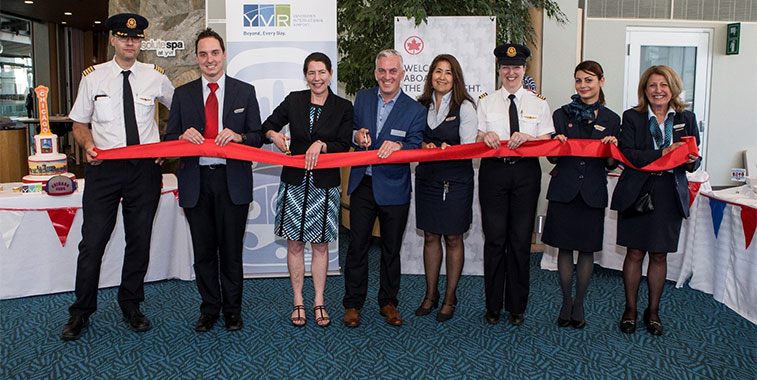 Air Canada is the fourth biggest carrier operating international flights to and from the US. This summer it has increased US capacity by 20% helped by the launch of several new routes, including Vancouver to Chicago, which saw the start of daily E190 flights on 4 June.