Munich-Vilnius is Skyscanner “Unserved Route of the Week” with 90,000 searches in the last year; a tempting sector for Transavia??? 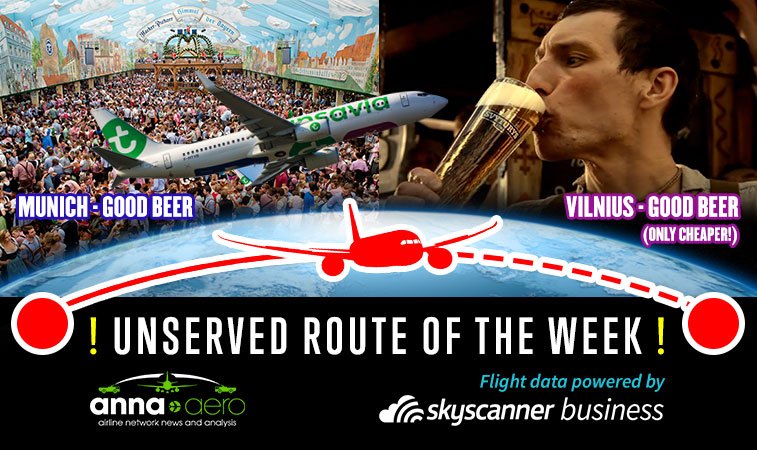 Situated in the heart of Europe, Munich is an economical and cultural hot spot which is probably best-known for the world’s largest beer festival each September. Despite being Europe’s only five-star (according to Skytrax) airport and ultra-efficient transfer hub, Munich still lacks a non-stop connection to Vilnius. Skyscanner’s data indicates that there are at least 90,000 beer-loving Germans and Lithuanians demanding a service between the Bavarian and Baltic State capitals.

With 90,000 searches last year, a potential new route from Munich to Vilnius has been identified as this week’s Skyscanner for Business-anna.aero “Unserved Route of Week” – a powerful new kind of analysis based on aspirational data captured from the Skyscanner.net flight comparison site used by +50 million unique visitors per month. “As one of the top three airports which offers the most frequencies in Europe, it is not easy to find a blind spot on the map,” says Markus Reichert, Head of Traffic Strategy and Market Analysis at Munich Airport. “Lithuania is one of the few European countries that has no direct connection to the Bavarian capital. Our data suggests that the biggest of the three Baltic countries attracted around 25k passengers one-way per annum with a non-stop flight from Munich.” 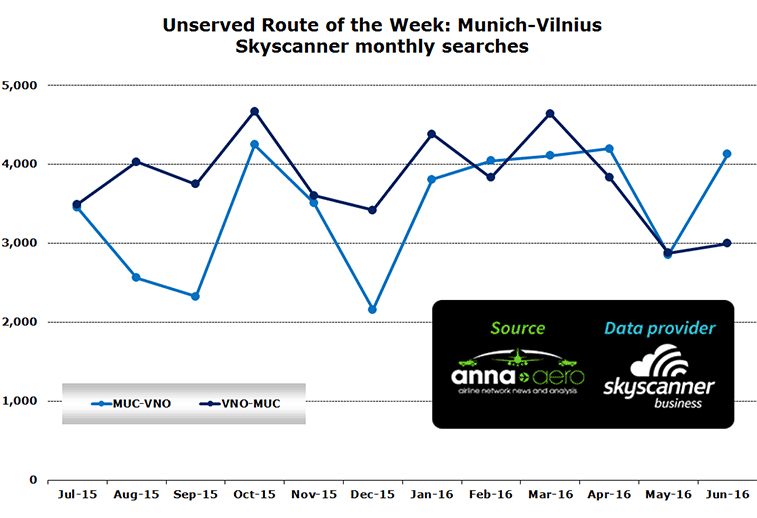 With the traffic on this route indicating an almost 50/50 split between the two cities, the potential carriers at the German end of the route were considered first. Lufthansa is currently the largest carrier (52% share) at Munich in terms of weekly capacity, according to OAG schedules data for the week commencing 2 August. While the Star Alliance does already fly to the Lithuanian capital twice-daily from its main hub in Frankfurt, as well as the same frequency to Riga and thrice-daily to the remaining Baltic state capital of Tallinn, it does not offer any flights to these three points from its Southern German base. However, Riga is served from Munich by airBaltic (12 times weekly) and Tallinn is covered by Adria Airways with a double-daily operation, so Vilnius represents a clear opportunity in this region.

While airberlin is the second largest at Munich (8% of weekly seats), it currently does not offer any services to any of the Baltic States from any of its German bases, so perhaps this is an opportunity that will be overlooked by the oneworld carrier. The next largest carrier (2.9%) at Munich is newcomer to the market Transavia, operating a network of 19 destinations currently from the airport. Its route portfolio at its fourth largest base (behind Paris Orly, Amsterdam and Eindhoven) is presently focused on city pairs in countries other than those in the Baltic States – Italy (six), Spain (four), Portugal (three), Croatia, Denmark, France, Germany, Morocco and Netherlands (all one) ‒ but the opportunity for a monopoly route from Munich could lure the LCC onto the unserved sector.

Considering the Lithuanian end of the route, Wizz Air (29%) is currently the dominant player at the Lithuanian capital city airport, ahead of Ryanair (22%) and airBaltic (10%). Wizz Air has an existing twice-weekly service to Memmingen – its airport for the Munich region – so it is perhaps unlikely that the ULCC will use the bigger facility in the short-term. Meanwhile #2 carrier Ryanair, does operate to two German points already from Vilnius, with a four times weekly service to Frankfurt Hahn and twice-weekly to Bremen. With its new-found love for primary airports, perhaps a spoke into Munich from its Vilnius operation could be a consideration for Europe’s biggest airline. Finally, airBaltic is also present in the German market from Vilnius, with its four times weekly Berlin Tegel operation, so the carrier could be a contender worth considering this airport pair.

When looking at the previous year of search data, the busiest month for potential traffic flows (for both directions on the route combined) is October 2015, with nearly 9,000, more than 3,000 higher than the lowest monthly figure, which was recorded in December 2015 (5,600). The seasonality profile of this search data is less extreme than last week’s Unserved Route of the Week (Athens to Melbourne), with the low-month traffic representing 63% of the highest month. According to OAG Traffic Analyser, because there is no direct service, the top three connecting options chosen by those passengers who did book travel between Munich and Vilnius in the past year indicates that the majority of connecting passengers use Riga (31%), Frankfurt (26%) and Warsaw Chopin (23%). Looking at the traffic flows in reverse, the Latvian capital holds its top spot (31%), but Warsaw (26%) has jumped ahead of Frankfurt (21%) in this direction.

An O&D that is not served by a non-stop flight will typically display a low purchase rate and low traffic. In this instance Skyscanner’s Travel Insight indicates a monthly average of 5.2% for the Munich to Vilnius route (see graph below). Therefore, if there was a Munich to Vilnius route, and if bookings performed in line with the “Skyscanner market average” for direct services at both airports (5.8%), the airline operating this route could immediately expect an improved purchase rate of 12%, without any increased marketing spend. However, with nearly 90,000 annual searches, the potential city pair should already be very sustainable. 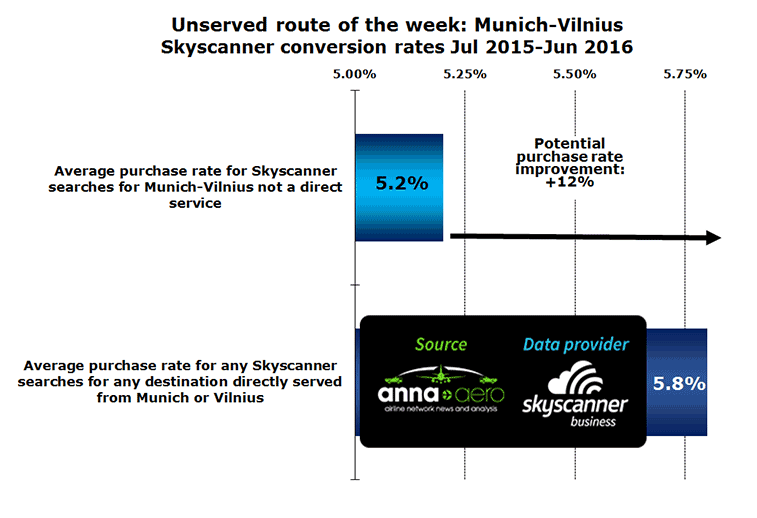