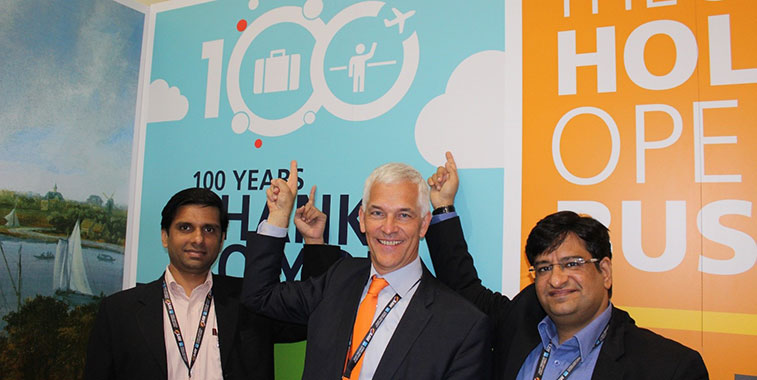 Showcasing their support towards Amsterdam Schiphol’s centenary year along with the airport’s Wilco Sweijen, Director Aviation Marketing (centre), are Jet Airways’ Rahul Pitale (left), Assistant Manager of Network Planning, and Neville Mehta, GM of Planning. As a result of Jet Airways’ entry into the Netherlands market this year, the European nation has become the airline’s eighth largest country market.

Looking back over the past couple of years, there have been many peaks and troughs in Jet Airways’ passenger traffic, with the time period analysed showing months of double-digit percentage growth and decline. The most significant change in traffic for the carrier was between 2014 and 2015, when it rose by just over 26% (4.8 million passengers). The year before witnessed traffic growing by 6.8%, between 2012 and 2013 it declined 2.3%, while between 2011 and 2012 it grew 7.4%. For 2011 traffic was up 14% compared to 2010, while in the first year of the decade traffic was up 25% when compared to 2009’s total. Overall in 2015, Jet Airways carried 11 million more passengers than it did in 2009, an increase of 103%. 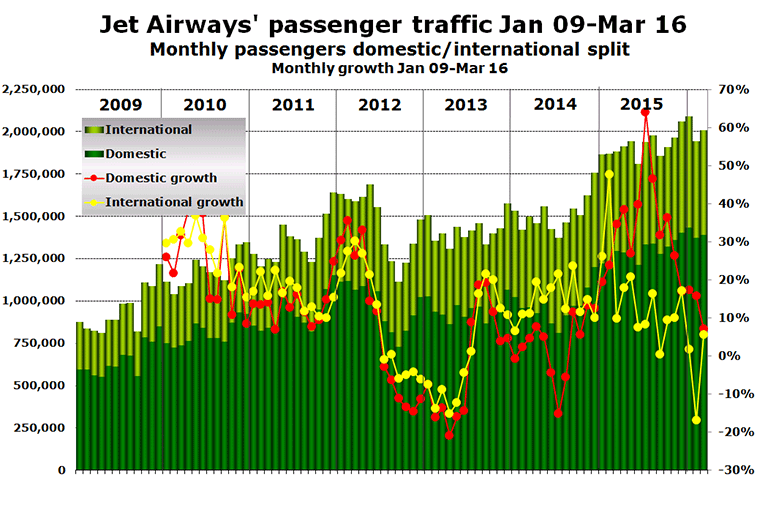 Leading internationally in 2016 despite drop in passengers for Q1

Jet Airways’ Indian domestic market makes up 83% of the carrier’s overall seat capacity this summer. The market during the past 12 months has also witnessed an increase in capacity of 4.0% when compared to last year. In Q1 2016, Jet Airways carried just under 4.2 million domestic passengers, a growth of 13% when compared to Q1 of the previous year. 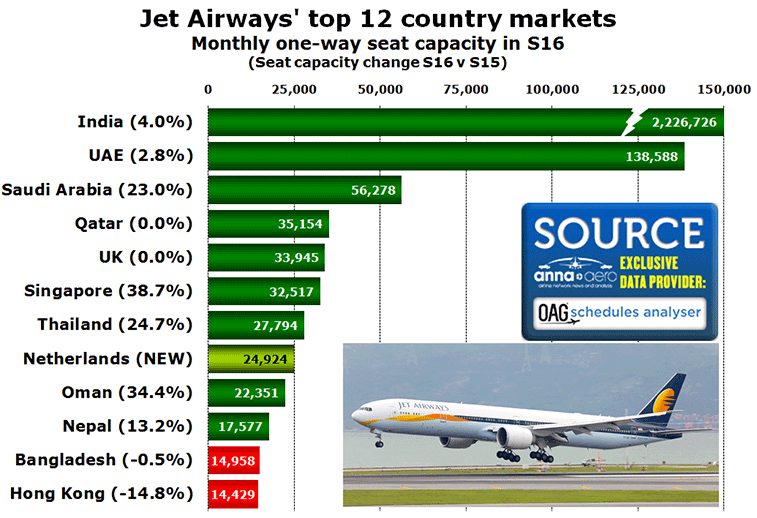 In relation to the airline’s top 12 country markets, it is the Netherlands which has made the biggest impact. With the airline moving its European hub operation from Brussels to Amsterdam, the Netherlands has become the carrier’s eighth largest market (highlighted in light green). Despite this move from Brussels to Amsterdam, the airline’s operation at the latter is currently 23% smaller than it was in Brussels. This is due to the carrier ending operations to New York Newark, with the US no longer served by Jet Airways. However, it does serve the US via various code-share agreements. As well as Belgium and the US, the carrier no longer serves Vietnam. Within the top 12, two markets have seen a shrink in capacity (highlighted in red), with Bangladesh and Hong Kong both reporting drops of 0.5% and 15% respectively. Outside of the top 12 only one other market, Kuwait (14th largest market), has reported a drop in capacity, down 33%. Sri Lanka (13th largest market; up 2.1%), Canada (15th; up 1.0%), France (16th; up 11%) and Bahrain (17th; 0.0%) are the other country markets which the carrier serves, with none showing drops in capacity.

Half of airports served see growth

Looking at OAG schedules data, 34 of the 65 airports which Jet Airways serve this summer have witnessed growth in seat capacity. Of these 65, only 18 are international destinations. According to OAG schedules, the following airports have been added to Jet Airways’ route map during the past year: Amsterdam (23rd largest airport), Vishakhapatnam (55th), Rajkot (59th) and Dibrugarh (62nd). Of the airline’s existing airports, one has seen triple-digit growth in seats from the carrier, with Leh (47th largest airport) seeing a growth in capacity of 121%. This is due to the airline increasing its frequency on its route from Delhi from daily to twice-daily, with some flights also seeing larger aircraft being used. Of the airline’s top 12 airports, three (highlighted in light green) are non-Indian airports. 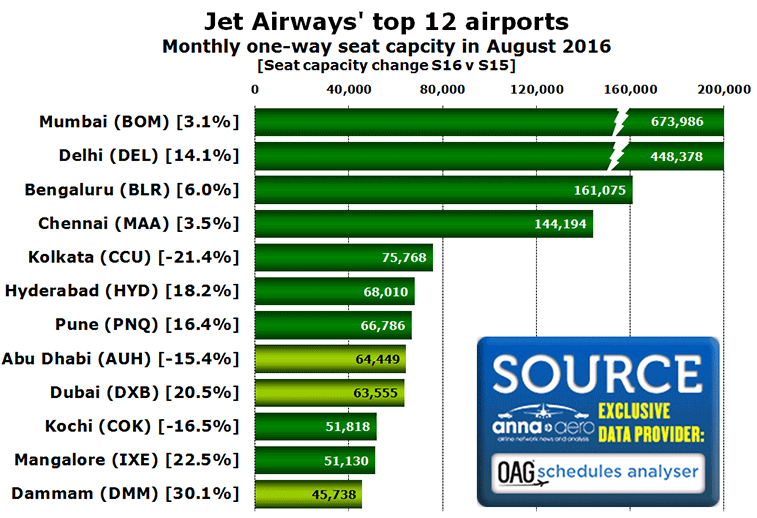 Carrier to see the return of six 777s from Etihad Airways; Potential for Europe expansion?

Speaking to anna.aero at the 138th IATA Slot Conference in Hamburg in June, Neville Mehta, GM Planning at Jet Airways, said: “We will be seeing the return of six 777-300s from Etihad Airways by winter, so we are hoping to bring these aircraft onto certain services.” The MEB3 carrier currently has a 24% stake in Jet Airways (as of 12 November 2013). One of the services mentioned was Amsterdam, and since their conversation with anna.aero, Jet Airways has now scheduled from 30 October a 777-300 on its Mumbai-Amsterdam sector, replacing the current A330-300 operation. With this extra capacity coming to Jet Airways, it opens up the opportunity of international expansion for the carrier. The question is though, what markets would be able to support a direct service? Looking at OAG Traffic Analyser data for Europe as an example (one of the biggest Indian expat markets able to be reached non-stop), the biggest unserved market is Goa-London Heathrow. However, Jet Airways only operates long-haul from Delhi and Mumbai at present. In respect of those airports, the biggest unserved markets from Mumbai are Manchester and Birmingham, while from Delhi it is Athens, Barcelona, Dublin and Manchester (all based on 2015 data). However with Amsterdam being its European focus airport, it is more likely that the carrier will increase its presence at the Netherlands hub, and strengthen its connections to North America through its Delta Air Lines and KLM partnership by allowing more Indian points to be connected one-stop via Amsterdam (the US is the largest Indian nation outside of India based on 2012 data from the Ministry of Overseas Indian Affairs). 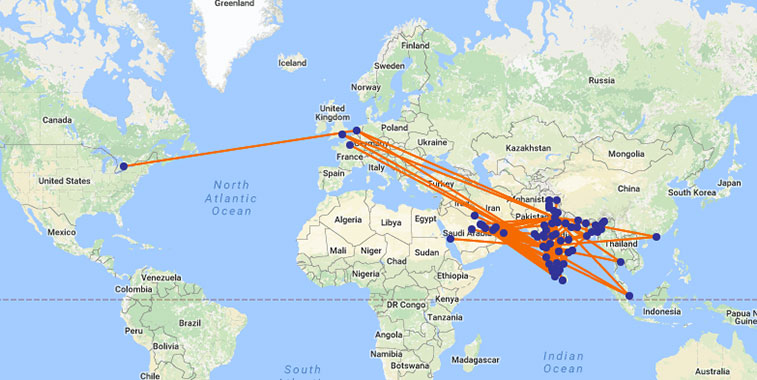 Jet Airways’ route map, August 2016. The carrier only serves 18 international airports this month, with its Indian domestic market making up 83% of all seat capacity.