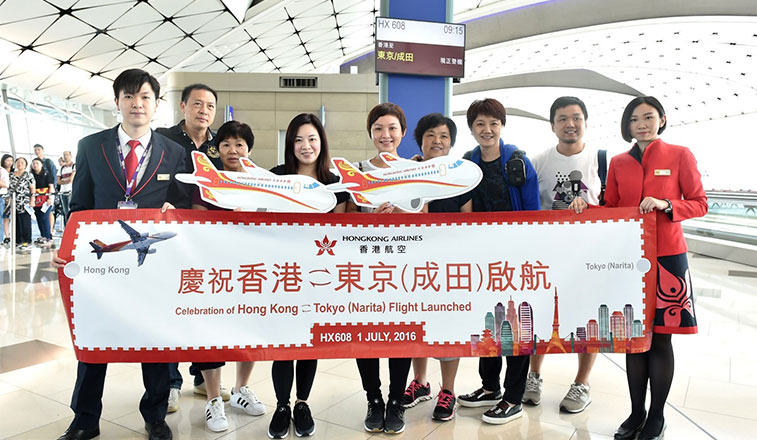 Hong Kong Airlines has been expanding its route network in Japan. It launched services to Tokyo Narita on 1 July. This has helped make Hong Kong (already the fifth biggest country market from Japan) the third fastest-growing with seat capacity this summer up by 12%.

Between 2012 and 2015, the number of domestic passengers carried by Japan’s two largest airlines, All Nippon Airways (ANA) and Japan Airlines (JAL), grew by just 5.2% from 71.1 million to 74.8 million. In the first half of 2016 domestic demand on the two carriers is down 0.6% despite the extra day in February. Although LCCs have now entered the domestic market, their combined market share in terms of seat capacity appears to have stabilised at around 8%. Jetstar Japan accounts for almost half of this (3.8%), followed by Peach Aviation (2.7%), Vanilla Air (0.9%) and Spring Airlines Japan (0.3%).

However, while ANA and JAL have seen minimal domestic growth, they have been expanding internationally. Combining passenger figures for both airlines shows that international demand was up 1.0% in 2013, 5.2% in 2014 and an encouraging 8.6% in 2015. In the first half of 2016 the growth in passengers on international flights has remained a more than healthy 7.3%. 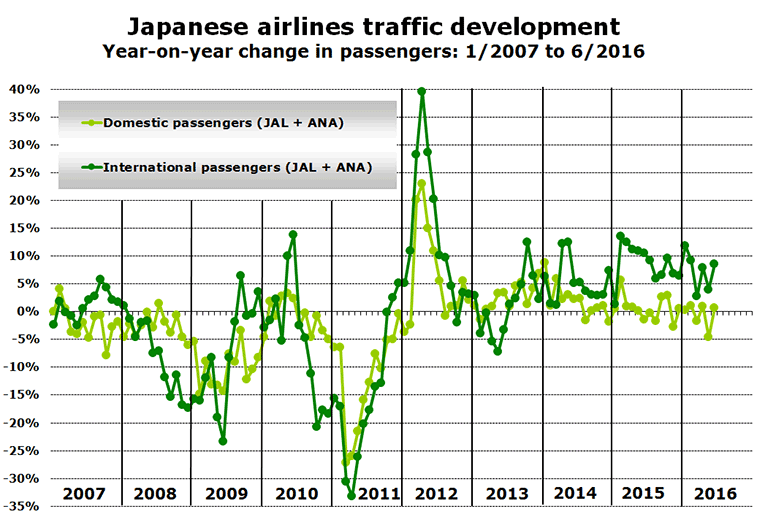 International capacity up 7% this summer

Analysis of OAG schedule data indicates that international seat capacity from Japanese airports is up a little over 7% this August compared with the same month last year. Of the top 12 country markets, four are showing a decline in seat capacity (Germany, Guam, Singapore and Vietnam), while three are showing increases of more than 10% (Hong Kong, South Korea and Taiwan). The biggest country market of all, China, which saw summer peak capacity surge by over 30% in S15, is up a more measured 6.8% this year. 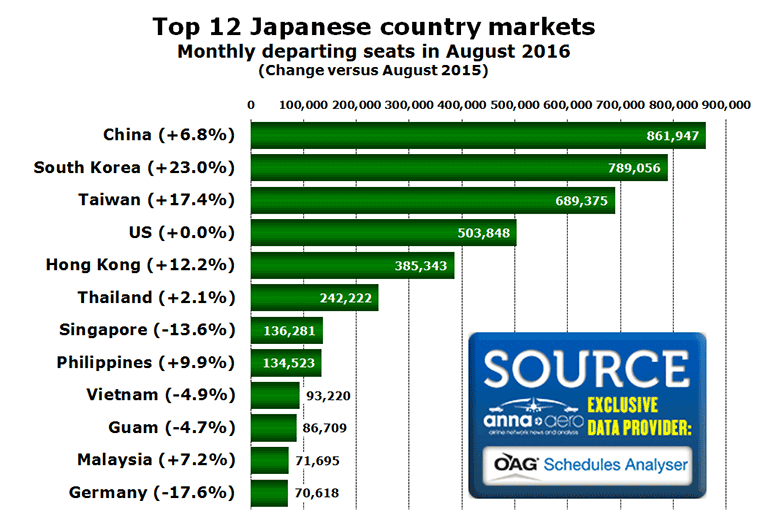 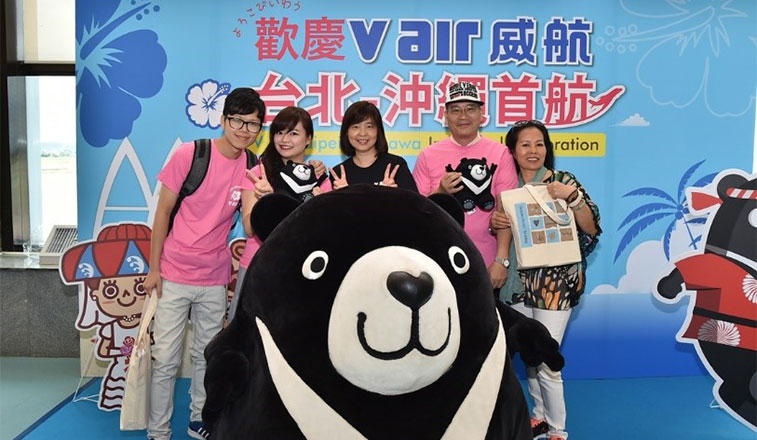 Helping the Japan-Taiwan market to grow by more than 10% this summer was the launch last month of V Air’s latest route to Japan, linking Taipei with Okinawa. Earlier in the year the LCC had launched services to Fukuoka, Ibaraki, Osaka Kansai and Tokyo Haneda. Fellow LCC Tigerair Taiwan has been busy growing routes to Japan as well in the last 12 months.

Last year, JAL, with 8.05 million international passengers, just beat ANA with 7.90 million across the whole of the year. However, in the first half of 2016 ANA has moved ahead, transporting 4.25 million passengers on international services compared with 4.07 for JAL. This is backed up by our analysis of OAG schedule data for August 2016 which shows ANA now clearly ahead of JAL. New international routes launched by ANA since last August are: Tokyo Haneda to Guangzhou, Shanghai and Sydney; and Tokyo Narita to Brussels, Kuala Lumpur and Wuhan. Of these, only the Wuhan route launched in 2016 (back in April), with the others all launching at the end of 2015.

Among the top 12 airlines operating internationally to and from Japan, only Thai Airways (+10.7%) and Korean Air (+10.4%) have increased their August seat capacity by more than 10%, although ANA’s growth of 9.6% is impressive given that it is already the leading carrier. 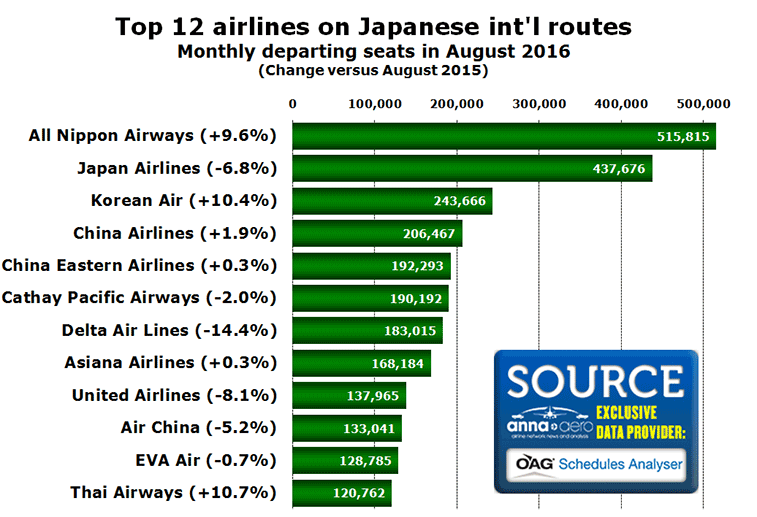 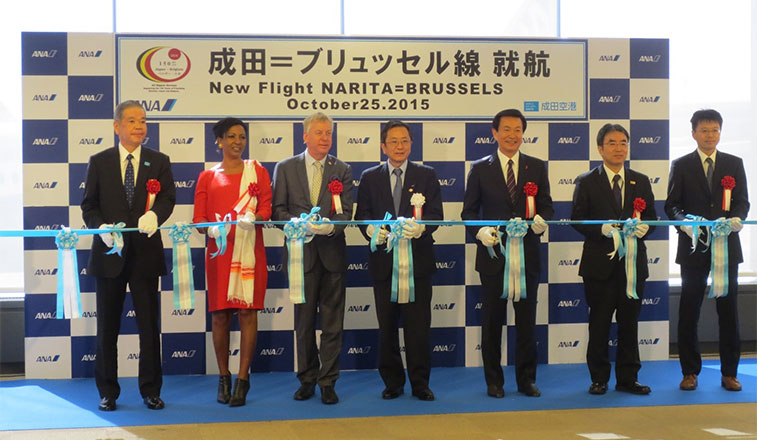 The beginning of the W15/16 season saw ANA launch a daily service to Brussels from Tokyo Narita using the Star Alliance carrier’s 787-8s, one of six new international routes the airline has launched in the last 12 months. Last July ANA overtook JAL for international passengers for the first time and has stayed ahead of its oneworld rival ever since December 2015.