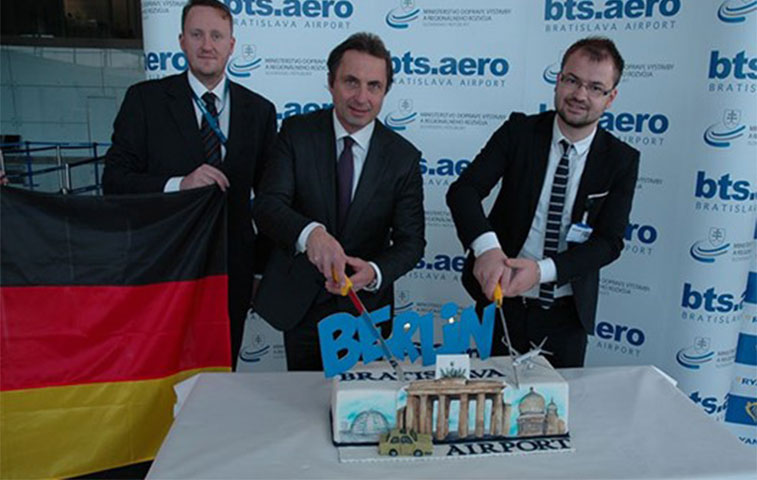 On 27 October last year, Ryanair commenced a new daily route connecting the capitals of Slovakia and Germany. Seen waving flags and cutting cake are: Stanislav Bujnovský, Aviation Director, Bratislava Airport; Ivan Trhlík, CEO of Bratislava Airport; and Denis Barabas, Sales & Marketing Executive, Ryanair. During the past year Ryanair has grown its capacity from Slovakia by nearly 17%, with it now becoming the nation’s number one carrier. Germany is one of four new country markets for Slovakia, with Poland, Macedonia and Russia being the other three.

With a population of nearly 5.42 million, Slovakia is Europe’s 27th largest nation in relation to population, sandwiched between Finland (26th; 5.47 million) and Norway (28th; 5.19 million). When comparing the capital city airports of these three nations, Helsinki (population of 629,512 – 2016 statistics) welcomed 16.4 million passengers last year, while Oslo Gardermoen (Oslo population – 658,390) witnessed 24.6 million. In other terms, this means that for each resident Helsinki welcomed 26 passengers, while for Gardermoen it’s just over 37 passengers. In regards to Bratislava (population of 432,801), the ratio is just 3.6, with Slovakia’s capital and largest airport in 2015 welcoming 1.56 million passengers.

As well as Bratislava, Slovakia is served by Košice and Poprad-Tatry airports, which both see regular scheduled services. Sliač Airport, situated in the spa town of the same name, 197 kilometres east of Bratislava, also serves the nation. However, it only offers limited summer seasonal charters. In relation to traffic, Slovakia’s three biggest airports welcomed just over two million passengers in 2015, with all three welcoming some 20.7 million passengers since 2006. Last year was the first time that Slovakia had witnessed over two million passengers since 2009.

In relation to the first five months of 2016, both Bratislava and Košice have witnessed double-digit growth (no 2016 data available for Poprad-Tatry). Bratislava has welcomed an additional 130,000 passengers between January and May when compared to the same period of 2015, representing an increase of 31%. Košice has welcomed just over 32,000 more passengers, representing a growth in the five-month period of 33%. 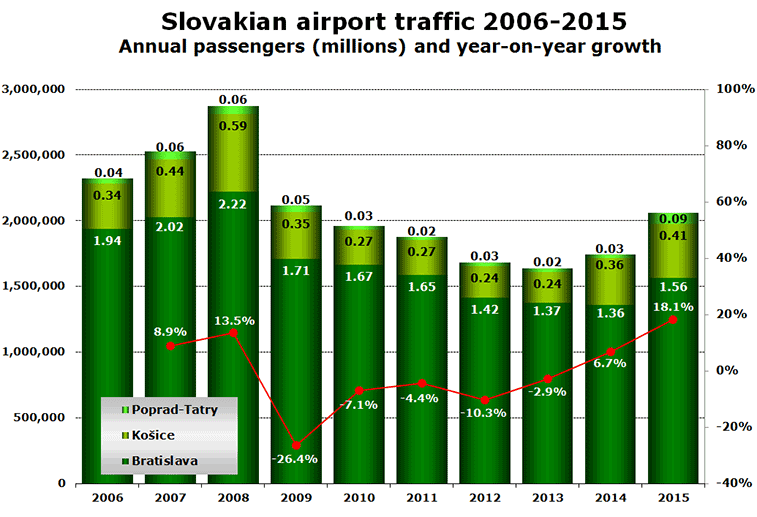 Looking back at the past decade, 2008 still remains the busiest year in Slovakia’s recent history, with that year seeing the Eastern European nation welcome 2.87 million passengers. Traffic for 2015 totalled 2.06 million, 28% fewer passengers than 2008. Looking at the airports individually, Bratislava has witnessed the slowest recovery of all three, with net traffic for the capital down 300,000 passengers when compared to ten years ago, while last year’s total is down 654,000 when compared to the record year of 2008. Košice (0.41 million passengers in 2015) and Poprad-Tatry (0.08 million) however have seen net gains in passengers, with the former seeing 66,600 more passengers than in 2006, while the latter welcomed 45,000 more last year than 10 years ago. Overall, Košice still welcomed 31% less passengers in 2015 than it did in its record year of 2008 (0.59 million), while Poprad-Tatry welcomed 42% more passengers than it did in that year (0.06 million). Last year was a record period for Poprad-Tatry, with it welcoming nearly 90,000 passengers, representing a growth of 169% when compared to 2014. The reason for this sharp growth is due to the arrival of Wizz Air flights from London Luton, a route inaugurated on 26 October 2014.

During the past 12 months, Ryanair has grown to become Slovakia’s largest airline. It has achieved this by increasing its seat offer by nearly 17%. Currently the only airport which Ryanair serves is Bratislava. During the past year the airline has added Berlin Schönefeld, Brussels, Manchester and Corfu to its Bratislava base, however it has closed routes to Liverpool and Brussels Charleroi. It should be noted that the latter of the two routes dropped will relaunch on 11 November, while flights by the Irish LCC to the Belgian capital’s main airport will end the day before. 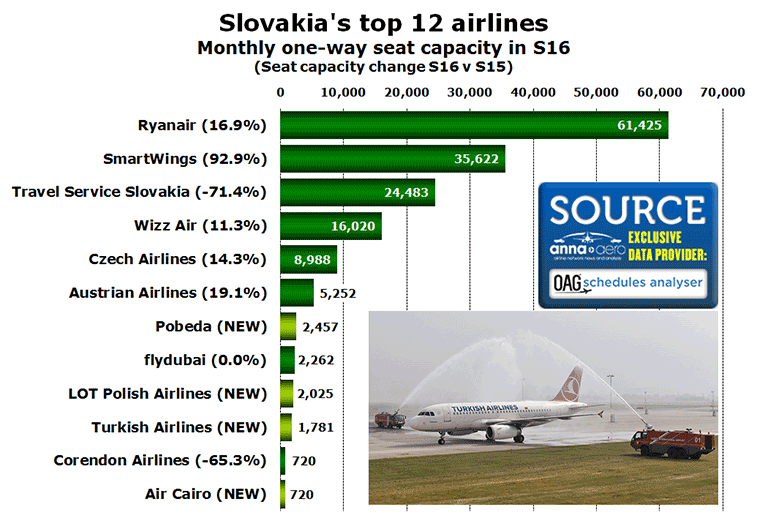 Over the past 12 months Pobeda, LOT Polish Airlines, Turkish Airlines and Air Cairo (all highlighted in light green) have commenced service to Slovakia. Bratislava was the first international destination for Pobeda, with the Russian LCC launching a daily 737-800 service from Moscow Vnukovo in December. LOT Polish Airlines commenced flights to Košice from Warsaw Chopin on 30 March, with Turkish Airlines linking to Slovakia’s second city from Istanbul Atatürk on 16 June. Looking at OAG schedule data, Air Cairo commenced a twice-weekly (Wednesdays and Saturdays) service between Hurghada and Bratislava on 4 April. Outside of the nation’s top 12, the only other airline to serve Slovakia is Bulgaria Air, which offers a weekly connection between Varna and Bratislava on its E190 fleet.

Wizz Air, the fourth largest carrier in Slovakia, is the only scheduled airline to serve Bratislava, Košice and Poprad-Tatry with year-round operations. Last June, the ULCC opened a one-aircraft base at Košice. The last airport that the airline entered in the Slovakian market was Bratislava, with it adding flights to the capital on 22 March in the form of a twice-weekly service from Skopje. This is currently the airline’s only route to Bratislava. From Poprad-Tatry it serves Luton, while from Košice it links to Bristol, Doncaster Sheffield and Luton. When it opened its operation at Košice, Wizz Air launched a route to Milan/Bergamo, however this route is no longer served, leaving just the three UK destinations.

During the past year, Germany (seventh largest market), Russia (15th), Poland (18th) and Macedonia (20th) have all become new country markets for Slovakia. This means that this summer Slovakia is connected to 23 country markets, a net gain of one compared to last year. Slovakia has also lost country connections, with Albania (16th largest market in S15), Malta (19th) and Morocco (21st) no longer served. 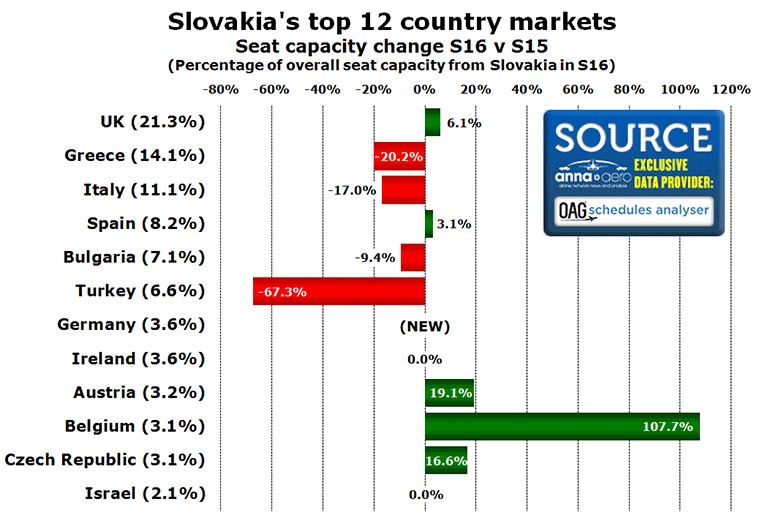 After reporting a modest growth of 6.1% over the past 12 months, the UK has leapfrogged Turkey to become Slovakia’s number one country market. Turkish capacity is down 67% despite the arrival of Turkish Airlines. A total of nine routes connect Slovakia and the UK, with Ryanair’s Bratislava to London Stansted being the largest, occupying 30% of overall capacity between the two nations. However, it is Luton which is the best connected airport, with it being the only destination to be connected to Bratislava (21% of capacity between two nations), Košice (9.8%) and Poprad-Tatry (9.4%). Overall Luton is the destination for 40% of the seats between the two markets. The other routes to connect the two are: Bratislava-Birmingham (7.1%); Bratislava-Manchester (7.1%); Košice-Doncaster/Sheffield (6.8%); Bratislava-Edinburgh (4.9%); and Košice-Bristol (4.7%).

As can be seen in the top 12, Belgium is the best performing market for growth, and coincidentally it is also only one of two markets to have seen triple-digit growth, helped by Ryanair introducing daily flights between Brussels and Bratislava, replacing its thrice-weekly link from Charleroi. The other market to see triple-digit growth is Cyprus (22nd largest market). It has achieved this feat because Travel Service Slovakia has doubled the amount of flights it offers between Larnaca and Bratislava.

Looking ahead to W16/17, Ryanair will open routes from Bratislava to Leeds Bradford, Nis and Eilat-Ovda, while it will end services to Luton as well as Brussels (mentioned above). Currently no other carrier is planning any new routes from Slovakia. 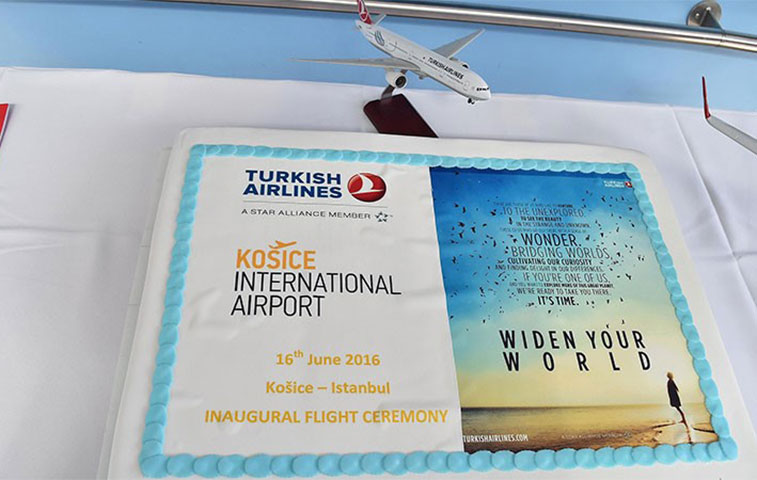 Turkish Airlines was the last airline to introduce operations to Slovakia when it commenced thrice-weekly flights to Košice from Istanbul Atatürk. As a result, Turkish is Slovakia’s tenth largest airline. Even with the introduction of this service, overall capacity to Turkey is down 67%, with it no longer being the nation’s largest country market.