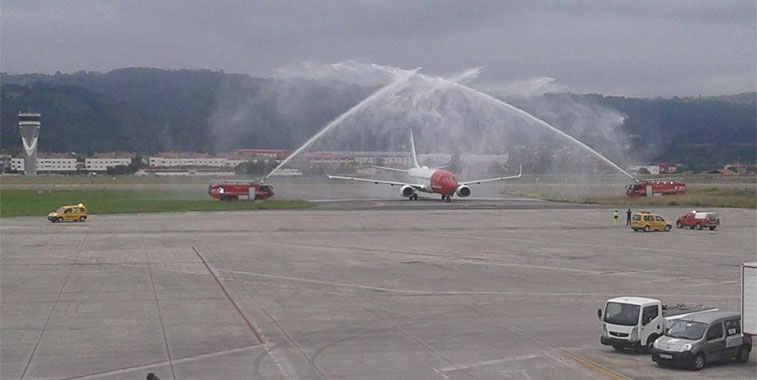 On 8 July Norwegian launched daily flights from its base in Barcelona to Bilbao, taking on incumbent Vueling. Barcelona was Bilbao’s second busiest route in 2015 (after Madrid) with almost 500,000 passenger movements between the two airports. Norwegian’s only other service in Bilbao is a twice-weekly seasonal service to Oslo.

Bilbao Airport in northern Spain is the country’s 13th busiest, handling 4.28 million passengers in 2015. This is an increase of 6.5% over 2014, slightly above the average of 5.9% achieved across all Aena airports last year. However, last year’s passenger figures fell slightly short of the all-time record of 4.29 million achieved in 2007. Between 2002 and 2007 passenger numbers had risen by a massive 74%. Announced in June, the airport will also be the host of Routes Europe 2018.

The city is maybe best known for the Guggenheim Museum, designed by Frank Gehry, which opened in 1997. Bilbao is also home to a metro system designed by Lord (previously Sir Norman) Foster, a skyscraper designed by César Pelli, while the airport itself and a downtown bridge were designed by Santiago Calatrava. Possibly no other city of comparable size has attracted so many world renowned late 20th-century architects.

Despite the collapse of Spanair in January 2012, it was not until 2013 that the airport saw a downturn in passengers. This is because Ryanair had been persuaded to start service in May 2012, but by the end of March 2013, the Irish ULCC had gone again. easyJet too, having launched multiple-daily flights to Madrid in January 2012, had pulled off the route by the start of S13. With Iberia also carrying over 120,000 fewer passengers in 2013 than it did in 2012, the airport saw demand in 2013 drop by almost 9%. 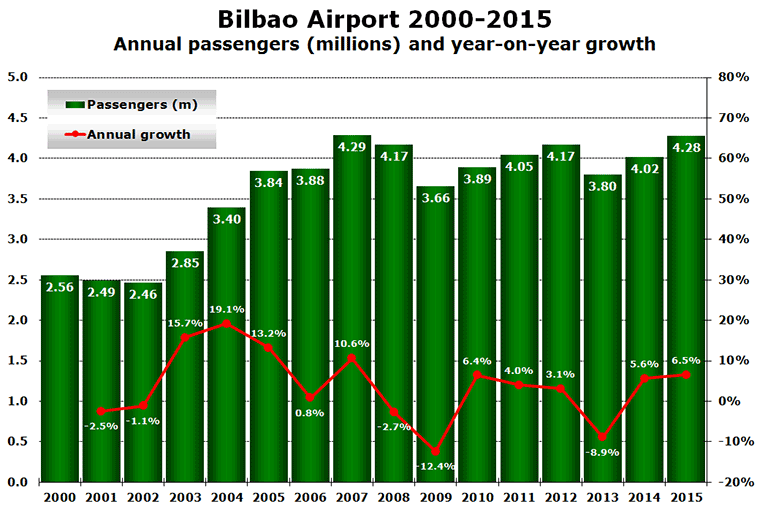 Monthly traffic data for 2016 reveals that passenger numbers are up 8.5% in the first of this year (though across all Aena airports the figure is 11.7%). Traffic growth in recent years has come primarily during the peak summer season. As a result the airport’s SVID (Seasonal Variation In Demand) score has risen in recent years from 2.89 in 2013, to 4.65 in 2014 and 4.98 last year. This is still “good” but indicates that the airport’s operations are gradually becoming more seasonal. 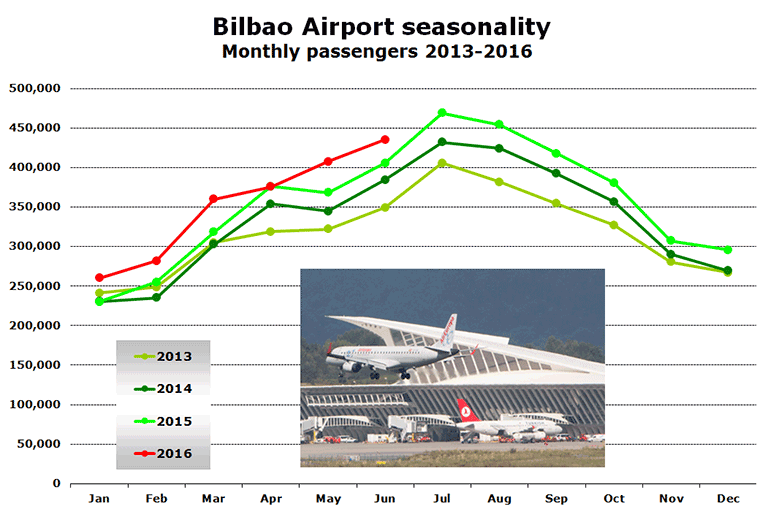 Vueling is the biggest carrier serving over 20 destinations

Bilbao’s biggest airline is Vueling, which last year flew over 1.5 million passengers to and from the airport, representing 36% of the total at the airport. This summer the LCC is operating around 130 weekly departures spread across a network of 23 routes. Since 2006 the carrier has operated flights to a total of 30 destinations but some, such as Athens, Paris CDG and London Heathrow are no longer served (though Paris Orly and London Gatwick are). 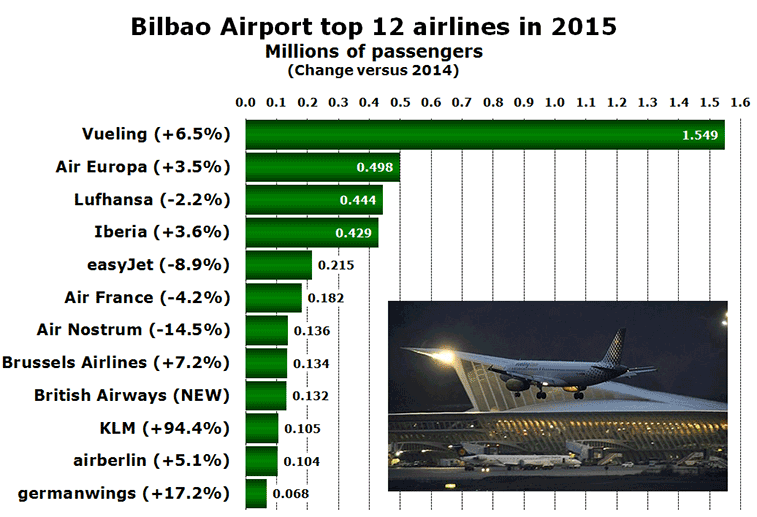 British Airways and KLM are both new to the top 12. The UK flag-carrier began double-daily flights from London Heathrow at the start of the S15 season, while KLM began seasonal flights from Amsterdam on 26 May 2014. Last summer also saw two other flag-carriers, Czech Airlines and SWISS, introduce service from Prague and Zurich respectively. Conversely, one carrier no longer operating at the airport is airberlin, which used to operate daily flights in the summer from its virtual hub in Palma de Mallorca.

One airline notably missing from the top 12 is Ryanair. Following the collapse of Spanair in January 2012, the Irish ULCC launched five routes in May and June of 2012. Four of these were domestic, plus Weeze in Germany. Barcelona was served with up to six flights per day and Ryanair carried almost 268,000 passengers in Bilbao from May to December. However, it withdrew all flights at the end of March 2013 and accounted for just 85,000 passengers at the airport that year.

Analysis of Aena data shows that Madrid (15.7%) and Barcelona (11.3%) between them account for 27% of the airport’s traffic in 2015. The next two biggest routes are to Lufthansa’s two hubs in Munich and Frankfurt, with the former overtaking the latter in 2015. Amsterdam and London Heathrow are the fastest-growing routes thanks to KLM and British Airways. The top 12 routes accounted for 68% of the airport’s total traffic in 2015. 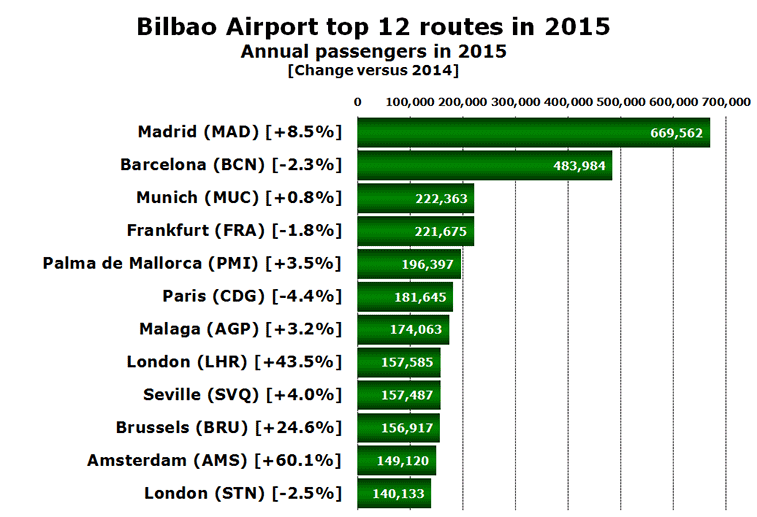 Since last summer, only three new services have been launched in Bilbao. Vueling began twice-weekly flights to Valencia at the start of the W15/16 season. On 10 June 2016 easyJet started service to Milan Malpensa, offering four weekly flights, while 8 July saw Norwegian launch its second route to the airport, a daily service from Barcelona. Norwegian’s only other operation at the airport has been a twice-weekly summer service to Oslo which launched in June 2013. 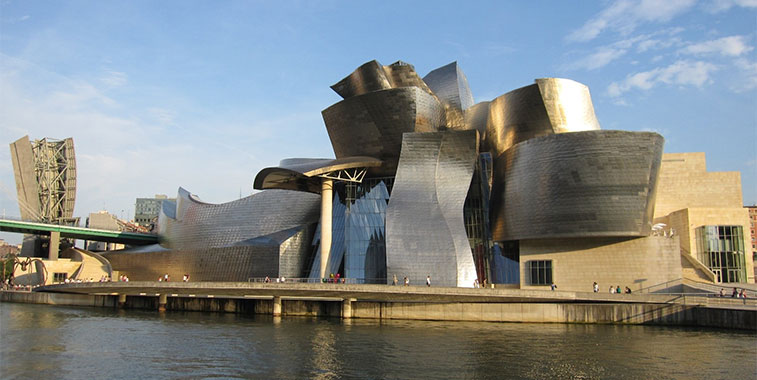 It may not be to everybody’s taste architecturally, but the Frank Gehry-designed Guggenheim Museum in Bilbao, which opened in 1997 has done a lot to help put Bilbao on the cultural map. Passenger traffic between Bilbao and the UK grew from 160,000 in 1996 (the year before the Guggenheim opened) to 428,000 in 2004, an increase of almost 170% in just eight years. Just over a decade later, in 2015, UK traffic to/from Bilbao was just over 400,000.