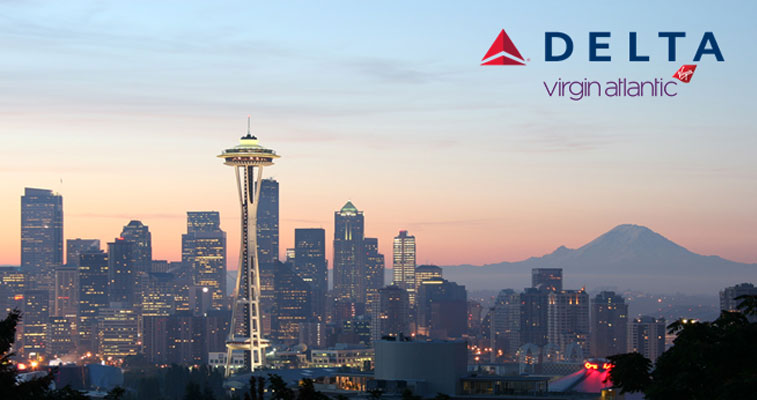 Delta Air Lines serves a total of 44 non-stop destinations from Seattle-Tacoma this summer, a net gain of seven routes when compared to S15. The airport will become the next US destination in the Delta/Virgin Atlantic Airways partnership, with the British carrier taking over the SkyTeam member’s service to London Heathrow from 26 March next year. As a result, weekly one-way seat capacity between Seattle and the UK capital with the partnership will increase by 25% in S17.

Seattle-Tacoma is the eighth largest of the 336 airports Delta Air Lines serves this summer, with the airport occupying 3.0% of the airline’s 20 million monthly departing seats. Delta is the second largest of 23 carriers serving Seattle this summer, with the SkyTeam member occupying just under 23% of the airport’s monthly seat capacity. The airline is second to Alaska Airlines, which occupies 46% of monthly seats, while third-placed Southwest Airlines holds 7.6%. With regards to the remaining two USB3 carriers, American Airlines and United Airlines (joint fourth largest carriers), both have 6.6% of monthly seats.

It’s the ‘A’ destinations that are top…despite slumps

Atlanta and Amsterdam (highlighted in light green) are the largest domestic and international routes for Delta from Seattle this summer, with the former also the largest overall route for the USB3 carrier. Despite witnessing a slump in seat capacity of 1.7%, the link to Delta’s largest hub remains the number one connection for the airline. Amsterdam, the only one of Delta’s eight long-haul and destinations from Seattle to post a top 12 place, and coincidentally the only international route in the top 12, has also witnessed a drop in seats, with capacity to the SkyTeam hub down 10%. 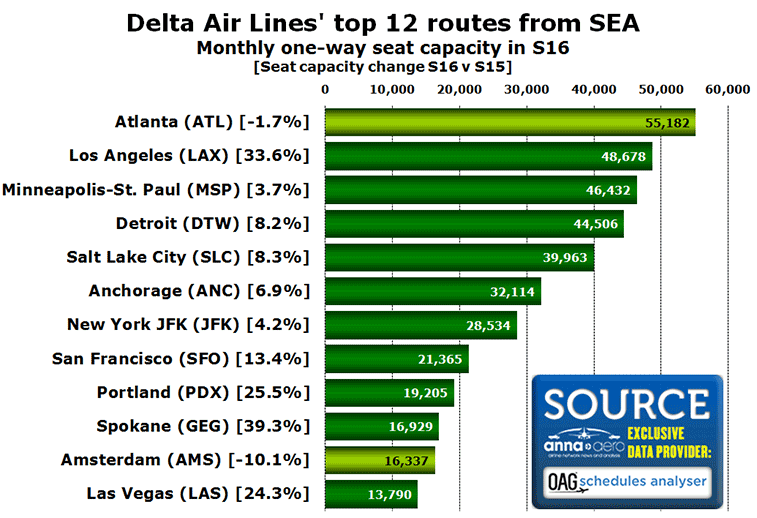 In total Delta serves 44 destinations non-stop from Seattle in S16, a net gain of seven routes when compared to S15. During the past year, the SkyTeam carrier has opened service to: Orange County (21st largest route); Pasco (30th); Kona (33rd); Victoria (34th); Orlando (35th); Boston (38th); Edmonton (39th); Billings (41st); and Missoula (43rd). During the past year the airline has also ended one route, with flights to Tokyo Haneda no longer being operated. However Tokyo Narita (15th) has seen its seat capacity grow by 29% during the past 12 months.

Of the 44 destinations served, 32 are domestic connections, while the remaining destinations are spread across: Canada (four – Calgary, Edmonton, Vancouver and Victoria); China (two – Beijing and Shanghai Pudong); and one each in France (Paris CDG), Hong Kong, Japan (Narita), Netherlands (Amsterdam), South Korea (Seoul Incheon) and the UK (London Heathrow). Overall international seat capacity from Seattle for Delta this summer is up 1.9% when compared to S15, with international services making up 20% of the carrier’s overall seat capacity from Seattle this summer.

On 1 January 2010, Delta completed its merger with Northwest Airlines. Before its merger, Northwest operated the following international services from Seattle: Amsterdam, Heathrow and Narita. During 2010 Delta did not serve Heathrow, and only took on Northwest’s services to Amsterdam and Narita – its only international routes from Seattle at the time – while also launching flights to Beijing and Osaka Kansai (the latter was discontinued in November 2013). From January 2010 up until June this year, Delta has carried just over 5.8 million international passengers from Seattle. In 2015, Delta carried 47% of international traffic between Seattle and Europe, 3.5% across the border to Canada and 43% of traffic between the city and Asia. On average international traffic from Seattle for Delta has grown 22% year-on-year since 2010. 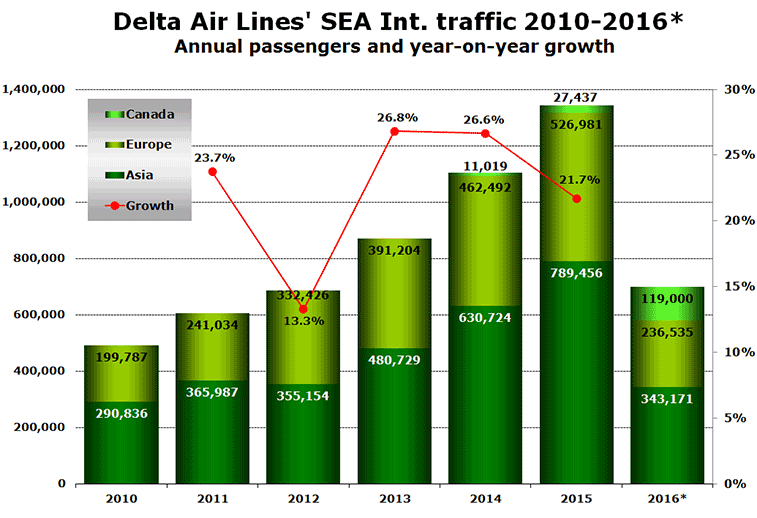 For the first six months of 2016, Delta’s international traffic at Seattle is up 22%, with the airline flying just over 767,000 passengers on international routes between January and June. However not all markets are performing at this level. Asia on average has seen a monthly decrease in traffic of just over 13%, while Europe has seen its traffic grow by just 7.8%. The reason that international traffic has seen this 22% surge is due to the expansion of services to Canada, with overall transborder traffic for the airline from Seattle being up 626% – helped by the opening of routes to Edmonton and Victoria. Nonetheless Canadian traffic made up only 24% of Delta’s international passengers for the first half of this year, with Asia accounting for 45% and Europe the remaining 31%.

From 26 March next year, Seattle-Tacoma will become the next US destination in the Delta/Virgin Atlantic Airways partnership, with the British carrier replacing the SkyTeam member’s current daily 767-300 service to Heathrow. Looking at OAG schedules, Virgin Atlantic will utilise its 264-seat 787-9s on the sector, a net gain of 53 one-way seats per day. This means that for S17 weekly one-way seat capacity to Heathrow will grow by just over 25%. 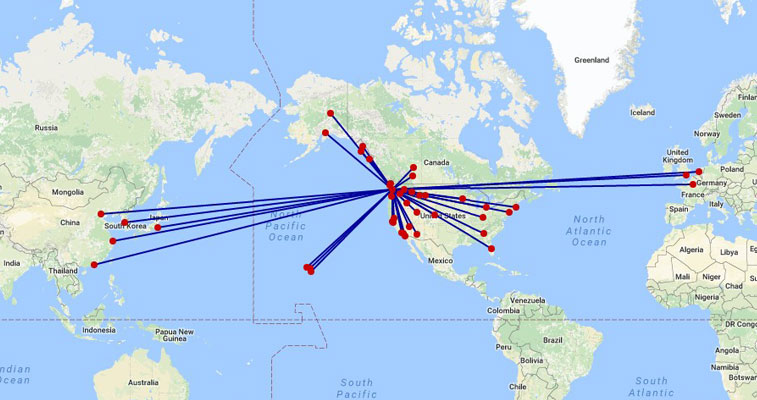