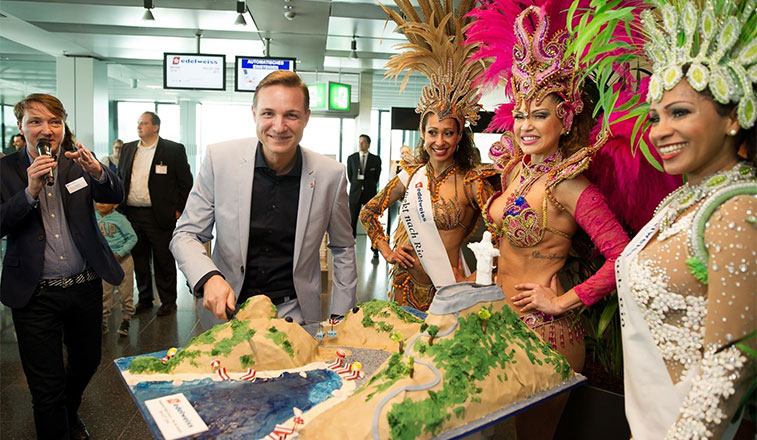 While the world tunes in to watch the Rio 2016 Olympics, Brazil itself is in the midst of its worst economic downturn in over a decade. The country’s GDP is forecast to shrink by almost 4% in 2016 according to The Economist. This downturn has been felt by the country’s airlines and airports for some months now. Domestic RPKs (Revenue Passenger Kilometres) have now been down year-on-year for the last 11 months, starting in August of last year. In April of this year the reduction in RPKs was greater than 10% for the first time in a decade. 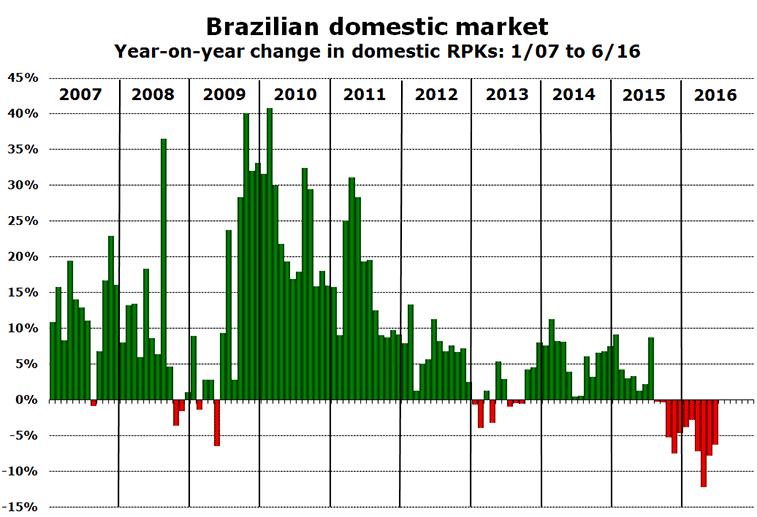 The Olympics is taking place from 5 to 21 August and yet according to OAG Schedules Analyser data domestic scheduled seat capacity in August is still down 11.4% compared with August 2015. For much of the summer the figure has been closer to minus 15%, with domestic capacity for September through November currently down around 13% compared with 2015.

In terms of market share among the four main domestic carriers, LATAM Airlines Brasil (formerly TAM Airlines) and GOL continue to be evenly matched, with the latter now slightly ahead, accounting for 36.2% of domestic RPKs in June 2016, compared with the former’s 34.7%, according to government statistics. Azul Airlines’ share of the market is still just under 17%, but Avianca Brasil has increased its share and is now at 11.4%. All other carriers account for less than 1% of domestic RPKs. 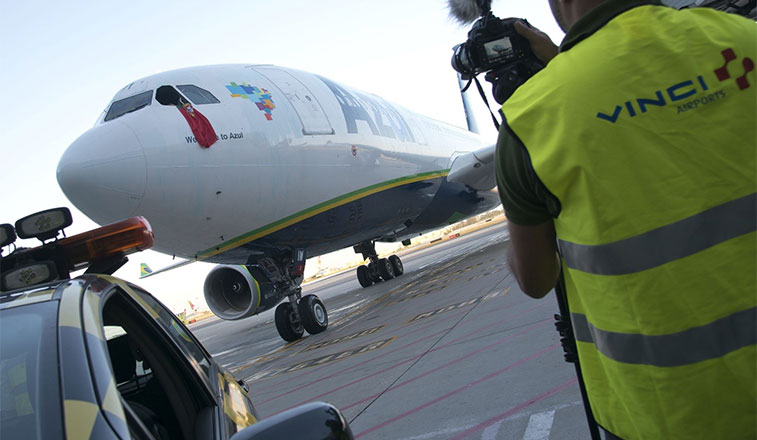 On 22 June Brazil’s third biggest domestic carrier, Azul Airlines, launched its first service to Europe. The four times weekly service from Sao Paulo Viracopos to Lisbon is being operated by the carrier’s A330-200 fleet.

In the last couple of years some of Brazil’s airports have been sold off by the government to a variety of consortia. Of the top seven airports in 2014 (based on passenger numbers) five are now no longer state-owned. As a result, their traffic figures no longer appear on the Infraero website. However, each of the six privatised airports reports their monthly traffic figures on their own website. Analysing this data for 2015 and 2016 shows how each of the airports are performing.

The best performing of the six in terms of traffic trends is Brasilia, which managed to report traffic growth up until March of this year. Since then it has joined the other airports in reporting a year-on-year decline in traffic. 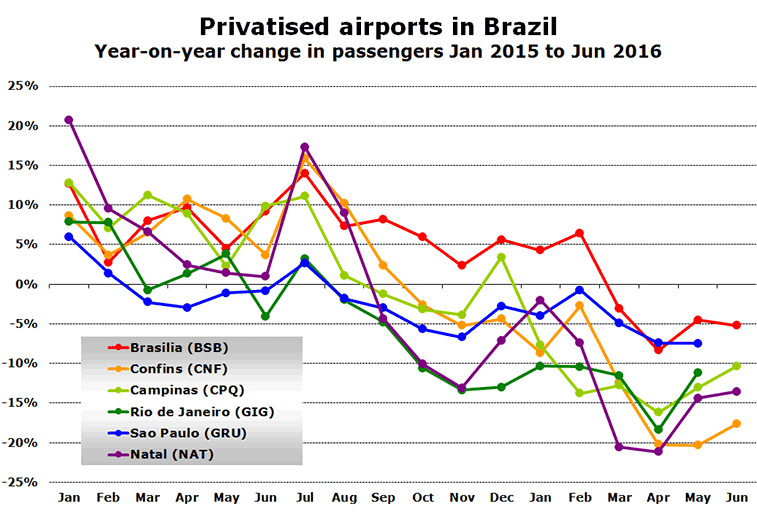 According to OAG schedule data international seat capacity from Brazilian airports in August is down 5.7%. The two biggest country markets, the US and Argentina, have seen contrasting fortunes. While the US market is down 21% the number of seats on flights to and from Argentina is up 11%. As a result, the US market, which was more than 50% bigger than the Argentine market a year ago, is now only 7% bigger.

Not surprisingly all three major US carriers, led by American Airlines (-23%), have seen capacity cuts in the last year. LATAM continues to be the leading airline for international services to and from Brazil and has cut international capacity by less than 1% since last August. However, local rival GOL has cut international capacity by over 8%. The only carriers in the top 12 to have increased capacity by more than 10% in the last year are Aerolineas Argentinas and Emirates. Both airlines have done this through an increase in average aircraft size rather than an increase in frequency. 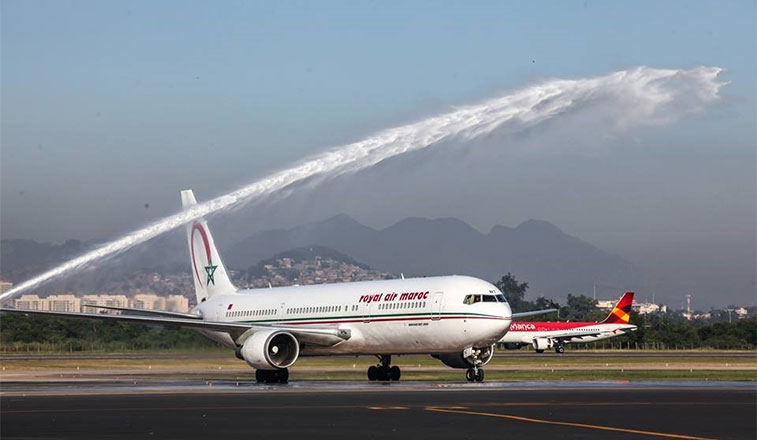 Royal Air Maroc’s arrival in Rio de Janeiro on 3 May 2016 was greeted by the traditional water arch salute. The new service from Casablanca operates via the Moroccan carrier’s existing Sao Paulo service.