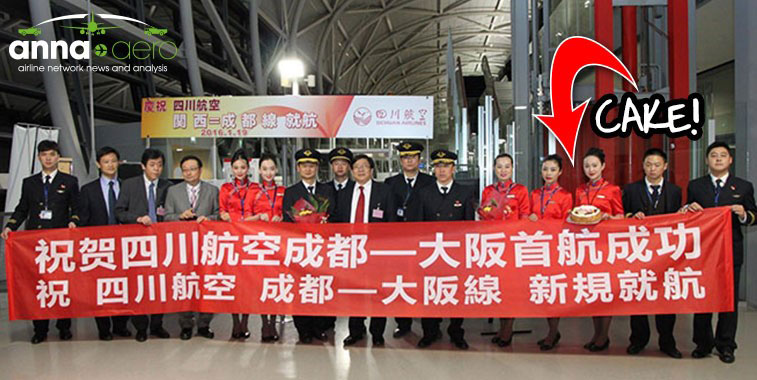 Yes you had to look hard to spot the route launch cake provided by Osaka Kansai Airport used to mark the start of Sichuan Airlines’ thrice-weekly service from Chengdu on 19 January this year. Capacity to Japan from China’s fourth largest airport has nearly doubled over the past 12 months.

Chendgu Airport is China’s fourth busiest airport (behind Beijing, Shanghai Pudong and Guangzhou), and the 32nd busiest in the world according to 2015 figures, nestling between two North American airports – Seattle-Tacoma in 31st and Toronto Pearson in 33rd. Growing at a similar rate to the former, and both increasing their respective traffic faster than the 30th biggest airport in the world, Seattle (+13%) and Chengdu (+12%) may both jump ahead of Houston Intercontinental (+4%) in 2016.

Chengdu is also the host of this year’s World Routes, which takes place next month, the second time a Chinese airport has hosted the main network development event, following Beijing in 2009. anna.aero was there in China the first time back in September 2009, producing its first ever and now famous show daily magazines, and we will be there again next month, delivering the biggest on-site printed publications at the event…straight into your hands!

The airport, which serves the provincial capital of Sichuan Province in Southwest China, currently boasts a network of 139 non-stop routes, operated by 52 airlines, according to OAG schedule data for week commencing 9 August. Over the last five years, Chengdu has averaged double-digit annual growth (+10% per annum), powering it past the 40 million annual passenger threshold in 2015. Since 2006, only during one year, 2008 at the start of the economic downturn, did the airport register negative growth (-7.2%). 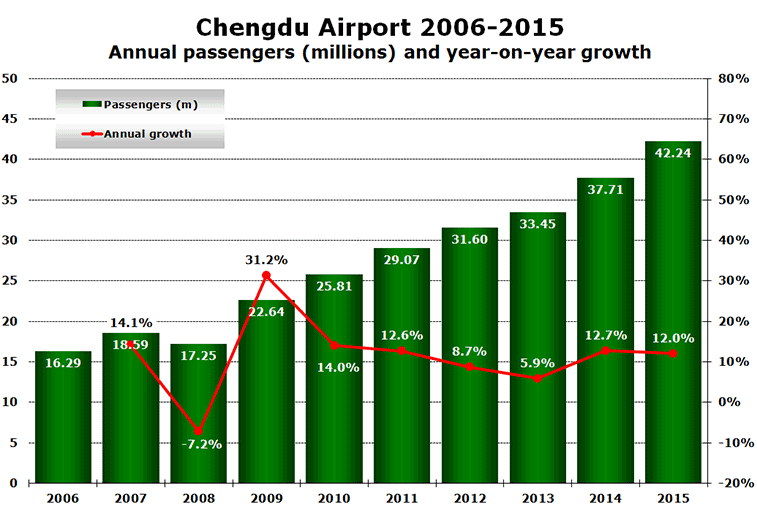 Our data elves do not have any indication on the 2016 traffic results so far this year. While weekly seat capacity at Chengdu is growing by only 0.5% this August, the figure for the year is slightly better at 1%. Should this seat growth be mirrored by passenger traffic, 2016 annual results could be around 42.7 million.

The top 12 airlines at the airport currently represent 88% of Chengdu’s weekly seats, down slightly from 89% in August 2015. The airport’s biggest airline, Air China (28% of weekly seats), has retained its top spot, despite a marginal trimming of its capacity since last August (-1.1%). This has allowed Chengdu’s second largest carrier Sichuan Airlines (parent – China Southern Airlines), which is headquartered in the city, to narrow the capacity gap from nearly 46,000 weekly seats to around 40,000 this August. At 11th, Shandong Airlines is the only new entrant in the top 12, replacing Tibet Airlines which was in eighth spot last year. 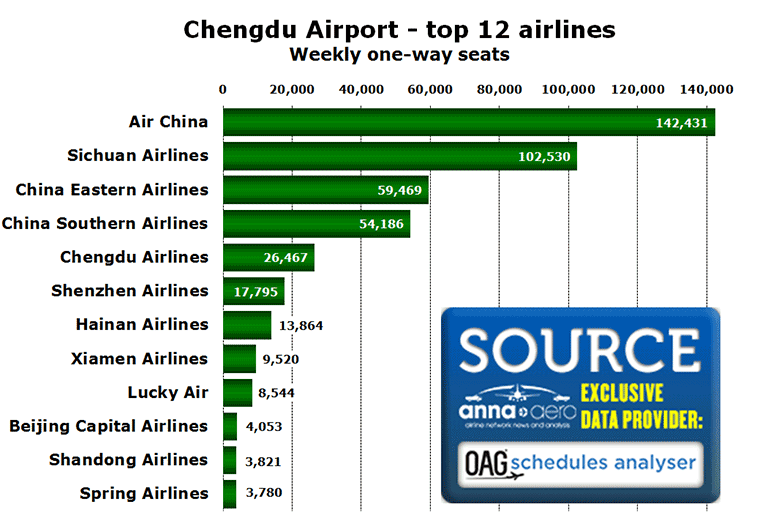 The fastest growing airline at Chengdu is Xiamen Airlines, which posted an annual increase of 33%, leaving the second fastest expanding carrier Chengdu Airlines (parent – Sichuan Airlines) at 8.8%, trailing in its wake. While Xiamen Airlines’ five routes from the airport have gone unchanged, capacity to Xiamen, Fuzhou, Hangzhou and Jinjiang have increased, and weekly seats to Changsha have actually declined year-on-year. China Eastern Airlines has reduced its capacity commitment to Chengdu the most of the top 12 airlines, falling by 11% since last August.

The top 12 routes at the airport currently represent 47% of Chengdu’s weekly seats, down from 50% in August 2015. The airport’s biggest route, to the capital Beijing (12% of weekly seats), has retained its top spot, despite a marginal reduction of its capacity since last August (-3.1%). The top five routes have remained unchanged year-on-year, with Lhasa and Shanghai (SHA) swapping positions over the last 12 months. A year ago, the route to Jiuzhaigou was in 11th spot, however it has fallen to 19th in August 2016. The biggest overseas route (as far as anna.aero is concerned) is to Hong Kong, sitting at 15th (formerly in 20th position), following a 15% growth in weekly seats over the past 12 months. 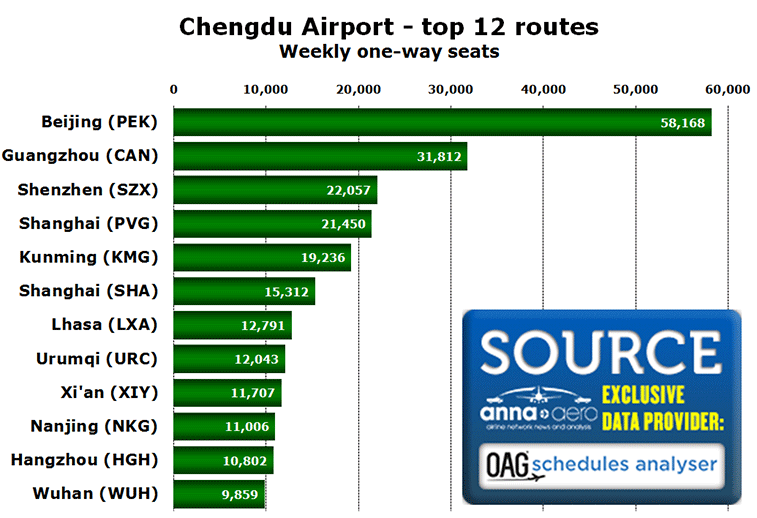 In terms of non-stop routes to other regions of the world, in 2016 the total is ten (Abu Dhabi and Doha in the Middle East; Amsterdam, Frankfurt, London Heathrow, Moscow Sheremetyevo, Paris CDG and Prague in Europe; Melbourne in Australasia; and San Francisco in North America). This is two routes higher than the figure a year ago, as flights to CDG and Prague have been added to the destination roll-call.

Despite being dominated by domestic services (87% of weekly seats), Chengdu does offer flights to 24 other nations this August. However despite the addition of markets like the Czech Republic (Prague), France (Paris CDG) and Nepal (Kathmandu), service has been lost to, India (Mumbai), Laos (Luang Prabang) and Pakistan (Karachi) when compared to the same week last August. The fastest growing country market over the last 12 months has been Cambodia (+683%), with capacity to Taiwan showing the biggest decline, dropping by 26% since last August.

Looking ahead to the remainder of 2016, Sichuan Airlines is launching its twice-weekly services to Prague from 12 August. Air China is planning to add Rome Fiumicino to its European network (via Urumqi) as well as Sydney in Australia, with both routes starting on 30 October. Finally, Vietnam Airlines will commence a thrice-weekly operation from Ho Chi Minh City to Chengdu on 1 November. 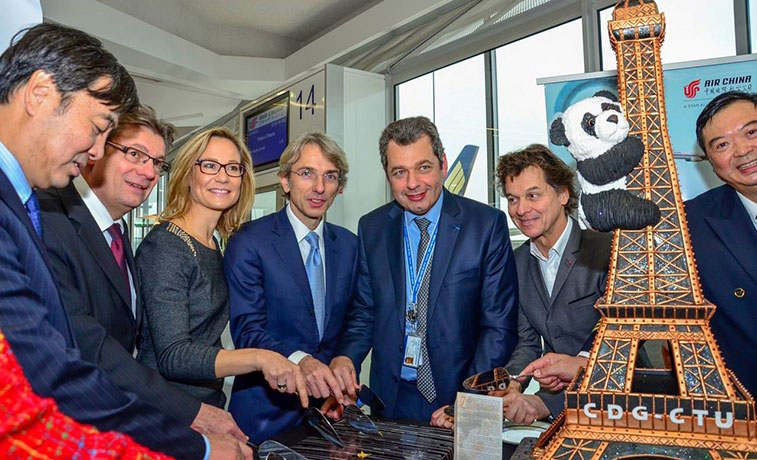 France has become a new country market in 2016 at Chengdu, thanks to the introduction of Air China’s four times weekly service to Paris CDG. Weekly seat capacity to the domestic market is however down by 2.9% year-on-year.