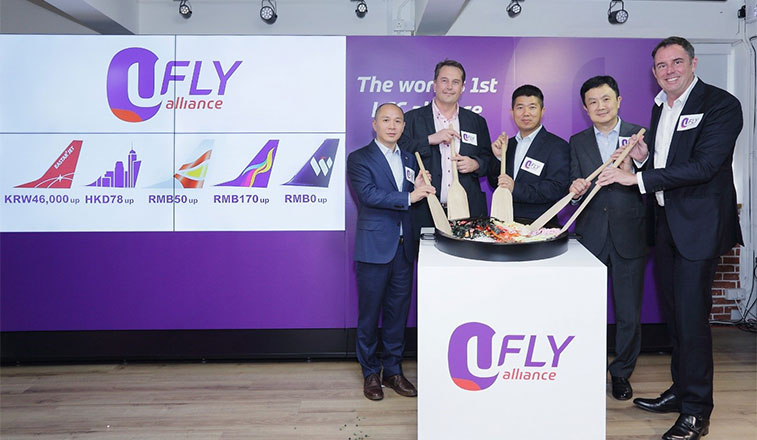 The U-FLY Alliance is an airline alliance made-up of low-cost carriers (LCCs) in Asia, originally launched with four members – HK Express, Lucky Air, Urumqi Air and West Air. The alliance welcomed its fifth member on 27 July, with South Korean carrier Eastar Jet joining the line-up. The alliance was first revealed on 18 January, and was heralded as a ‘game-changer’ for the airline industry, dedicated to making travel more affordable and accessible than ever before. “With the launch of the first LCC alliance in the world, we are entering into a new era of travel that speaks to what travellers really want: flexible and affordable routes that are also safe and secure,” said Andrew Cowen, U-FLY Alliance CEO and HK Express CEO at its inauguration in January. Looking at the alliance, below is a breakdown of its members combined fleet, route count and the unique airports to each airline.

Of the 104 airports which U-FLY airlines cover, 57 of them are only served by one carrier, with Lucky Air having the biggest monopoly of 27 unique airports on the alliance network. Of the remaining airports, 47 are served by more than one carrier in the alliance, with 14 of those destinations seeing flights from three of the carriers, while Lanzhou is the only airport in U-FLY’s network to be served by four of the five airlines. The Chinese airport is currently not served by Eastar Jet. No airport is currently served by all five members. In total the alliance’s network covers 202 routes, which are flown by 87 aircraft spread across the five airlines.

Urumqi Air is the fastest growing of the five carriers

During the past year, it is the alliance’s smallest airline, Urumqi Air, which has recorded the best growth of the five carriers, with seat capacity up nearly 131%. This summer the Urumqi-based LCC, launched in 2014, is operating 15 routes, a net gain of nine when compared to S15, with Urumqi-Lanzhou being its largest, occupying 14% of the airline’s weekly seat capacity. Although Urumqi Air is the fastest growing airline, it is West Air which has seen the biggest net increase in seats, with the airline offering 145,000 more seats this summer when compared to last year. Lucky Air, although the largest carrier, is the airline which has seen the smallest net increase, with its summer capacity up by just over 20,000 seats. 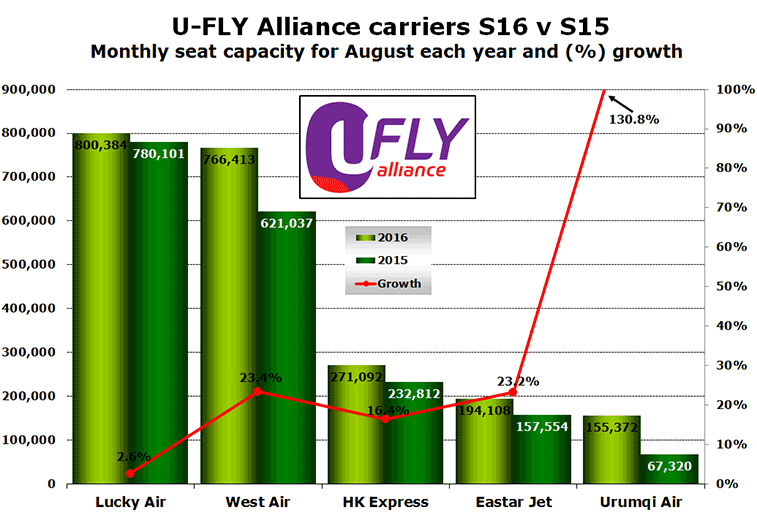 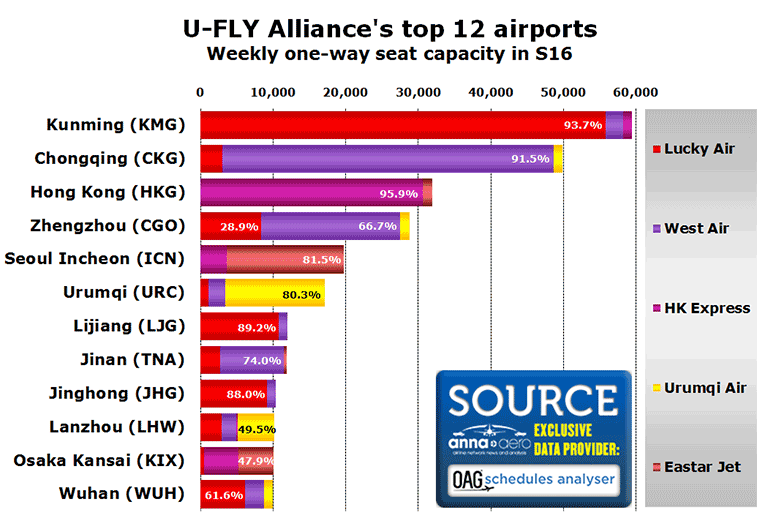 Kunming is the largest U-FLY airport. With just under 59,500 weekly seats across the three carriers of Lucky Air, West Air and HK Express, the Chinese airport sees just over 12% of U-FLY’s weekly departing seats. Kunming is followed by Chongqing (10% of weekly seats) and Hong Kong (6.4%). Of the 104 airports which U-FLY serves, only 24 see more than 1% of weekly seats. What is interesting to note is that none of the 57 airports served by just one carrier are in the top 12, with Hong Kong, Seoul Incheon and Jinghong being the only ones to be served by just two members of U-FLY.

Only one top 12 route has over 50% of overall capacity

Looking at the top 12 routes for U-FLY, only one of them sees the alliance having over 50% of weekly seats on that sector, with Kunming to Sanya (tenth largest) achieving this feat with U-FLY having over 58% of all seats. In total this route is served by three carriers, with U-FLY’s Lucky Air facing direct competition from China Southern Airlines (25% of weekly seats on route) and China Eastern Airlines (17%). 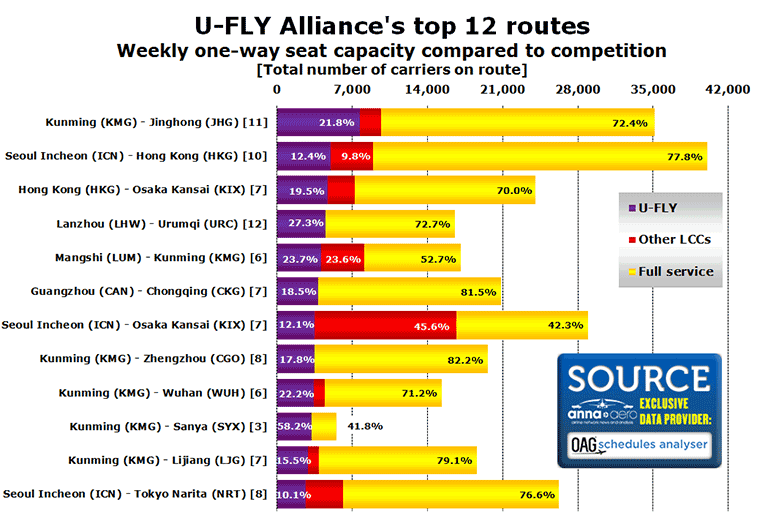 Looking at U-FLY’s top 12 routes, what is very evident is full service carrier competition on all sectors. Of the top 12, eight compete against LCCs which are not part of the alliance, with the connection between Seoul Incheon and Osaka Kansai taking on the biggest challenge, with Eastar Jet’s thrice-daily service facing Peach Aviation’s four daily flights and Jin Air’s and Jeju Airlines’ twice-daily operations.

Who can be the next carrier to join the roll call?

Looking at LCCs based in Asia, there are approximately 52 which are not a member of U-FLY. Looking at the current country markets which are served, 39 LCCs are based in those retrospective nations. So with numbers that great, it is hard to see which will be the next airline member. It could even be an airline from as far afield as Australia that joins the line-up, or even the Middle East. 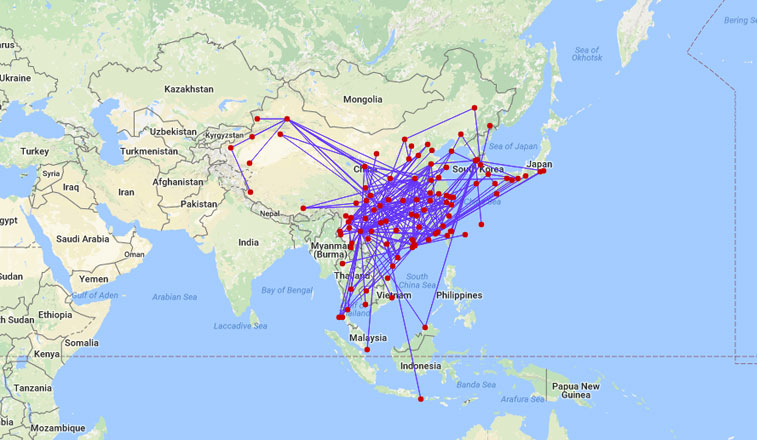 U-FLY Alliance route map August 2016. All together U-FLY’s network is made up of 202 routes which connect 104 airports. With Eastar Jet joining the alliance line-up last month, it has brought with it six new airport’s to the alliance’s network, namely Cheongju, Seoul Gimpo, Okinawa, Taipei Taoyuan, Taipei Songshan, and Yanji.