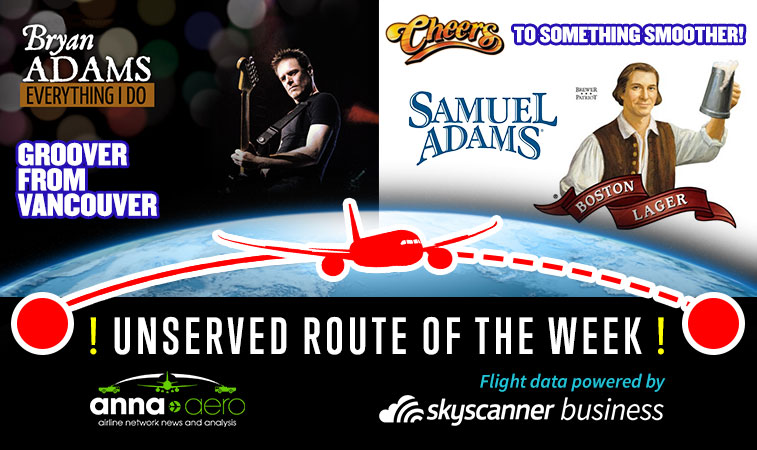 anna.aero thinks Vancouver-Boston is a potential route for Air Canada because it already serves Boston from other (east) Canada cities. WestJet’s Director Network, Lee Lipton, may not agree – would Boston make a nice trio along with Newark and Chicago Lee?

With 90,000 searches last year, a potential new route from Vancouver to Boston has been identified as this week’s “Skyscanner for Business-anna.aero Unserved Route of Week” – a powerful analysis based on aspirational data captured from the Skyscanner.net flight comparison site used by +50 million unique visitors per month. “The US is YVR’s most important international market with 86 daily services offered to 22 destinations. It was also YVR’s fastest growing sector last year generating an 8% growth rate and continued strong growth in the first half of 2016 at 3.4%,” says Russell Atkinson, Manager Air Service Development, Vancouver Airport. “Inbound travel to Vancouver from US visitors has been particularly strong, growing by 15.5% as American visitors take advantage of affordable vacations due to a weaker Canadian dollar. Boston is one of YVR’s most requested unserved services and already a popular route with around 35,000 passengers currently travelling between our two cities. A direct service would be welcome by our many passengers who currently require a connection and for all of those passengers who would jump at the chance when a direct service is introduced.” 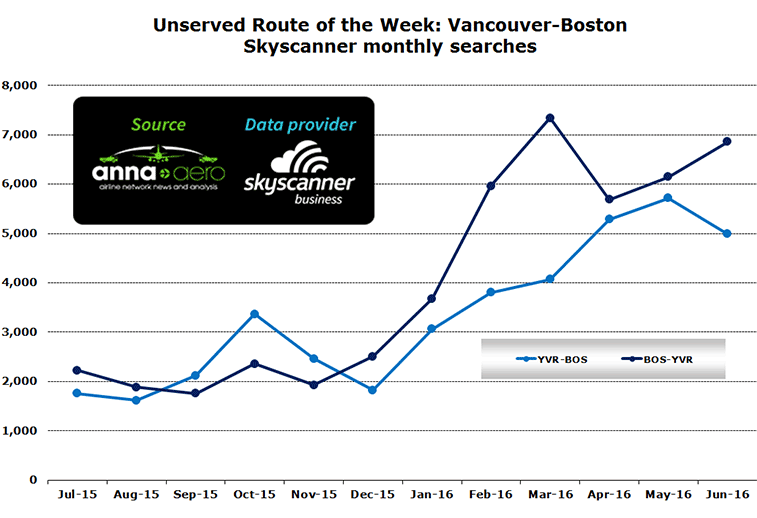 With search demand on this route indicating a 45/55 split between the two cities in favour of Boston, the potential carriers at the US end of the route were considered first. JetBlue Airways is currently the largest carrier (24% share) at Boston in terms of weekly capacity, according to OAG schedules data for the week commencing 4 August. While the airline does fly limited international services from its second biggest hub – namely to Aruba (Aruba), Bermuda (Bermuda), Dominican Republic (Punta Cana, Santo Domingo and Santiago), Haiti (Port au Prince), Mexico (Cancún), and Puerto Rico (San Juan) – it does not currently fly to Canada from Boston, nor indeed from any of its bases. In fact, none of the next three largest airlines at the US airport, which just so happen to be the USB3 (the “US Big Three”) American Airlines (19% share), Delta Air Lines (14%) or United Airlines (10%) – have any transborder flights to any Canadian city from Boston!

Considering the Canadian end of the route, Air Canada (46%) is currently the leading player at Vancouver, more than double the size of WestJet (20%). The former has existing east Canada services into Boston – 54 weekly flights from Toronto Pearson, 41 weekly from Montreal, 13 weekly from Ottawa and Halifax – as well as 12 other US routes from Vancouver. However, with the exception of its flights to Chicago O’Hare and New York Newark, the remainder of its US operations from Vancouver are to cities along the western side of the US and to Hawaii. But a new route to Boston would not be out of the question for the Star Alliance carrier from a network perspective.

The situation over at LCC Westjet is not that much different to Air Canada. It too already operates into Boston – 21 weekly flights from Pearson and daily from Halifax – in addition to the eight US cities currently being operated from Vancouver, so the market synergies are there. However, unlike Air Canada, the entirety of its US services from Canada’s second largest airport are all along the western side of the US and to Hawaii – namely to Los Angeles, Honolulu, Kahului, Las Vegas, Orange County, San Francisco, San Diego and Palm Springs. So it may require more of a leap of air service development faith for Lee Lipton’s WestJet network planning team to make the jump into Boston than their Air Canada colleagues over in Montreal.

When looking at the previous year of search data, the busiest month for potential traffic flows (for both directions on the route combined) is May 2016, with nearly 12,000 searches, over 8,000 higher than the lowest monthly figure, which was recorded in August 2015 (3,500). The seasonality profile of this search data is significantly more extreme than last week’s Unserved Route of the Week (Munich to Vilnius), with the low-month traffic representing 29% of the highest month. According to OAG Traffic Analyser, because there is no direct service, the top three connecting options chosen by those passengers who did book travel between Vancouver and Boston in the past year indicates that the majority of connecting passengers use Toronto Pearson (32%), Montreal (18%) and Chicago O’Hare (14%). In all, 26 different transfer airports were used by travellers to connect between the two cities.

An O&D that is not served by a non-stop flight will typically display a low purchase rate and low traffic. In this instance Skyscanner’s Travel Insight indicates a monthly average of 4.8% for the Vancouver to Boston route (see graph below). Therefore, if there was a Vancouver to Boston route, and if bookings performed in line with the “Skyscanner market average” for direct services at both airports (5.3%), the airline operating this route could immediately expect an improved purchase rate of 10%, without any increased marketing spend. However, with nearly 90,000 annual searches, the potential city pair should already be very sustainable. 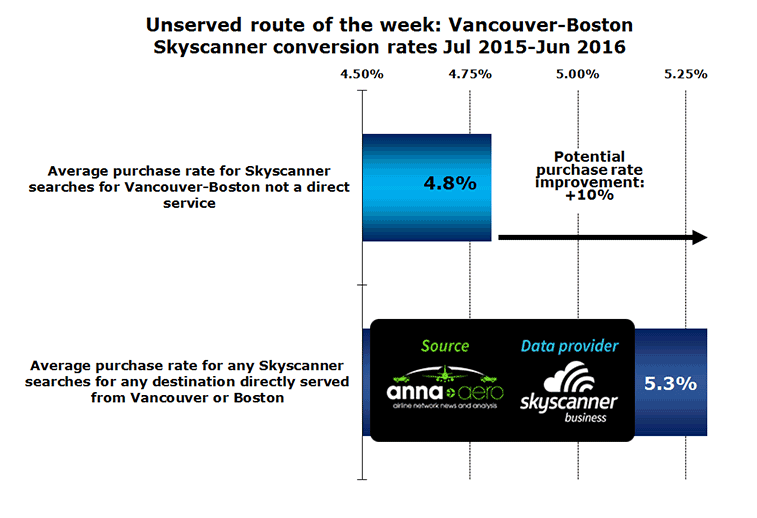