Airbus and Boeing rack up the orders in Farnborough, however both are not performing to par in deliveries 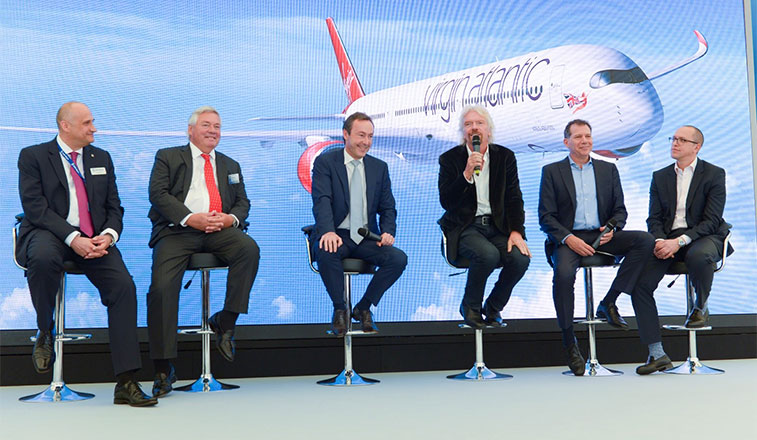 July was a busy month for both Airbus and Boeing, as both companies racked up the orders at this year’s Farnborough Airshow. One of the leading orders for the European manufacturer was Virgin Atlantic Airways’ decision to purchase eight A350-1000s, with a leasing agreement for a further four. Airbus also welcomed AirAsia’s decision for 100 A321neos. For Boeing, some of the biggest confirmed orders included Air Europa which has placed an agreement for 20 737-8MAXs, while Chinese LCC Ruili Airlines placed an order for six 787-9s. However, even with both companies taking significant orders at the show, their respective manufacturing facilities still had to deliver confirmed units from previous events like Farnborough.

Deliveries during the seventh month of 2016 between Airbus and Boeing totalled 98 units, 40 less than the figure that was delivered by the companies in June, and nine lower than the same month last year. During July, Boeing distributed 57 aircraft, while its European counterpart delivered 41. The result means that for 2016 Boeing has increased the difference between it and Airbus with regards to deliveries to 93 units, a gap which grown by 14 units since last month. At this point last year, the delivery void between the two was 82 units, with Boeing once again having the lead. During July, Airbus delivered eight less units this year when compared to the same month last year, while Boeing distributed one less unit than the same 31 days of 2015. In relation to the distribution of wide-body and narrow-body aircraft, 74% of deliveries in July were narrow-body while 26% were wide-body. In relation to the first half of this year, the monthly average between January and June was 73% narrow-body and 27% wide-body. 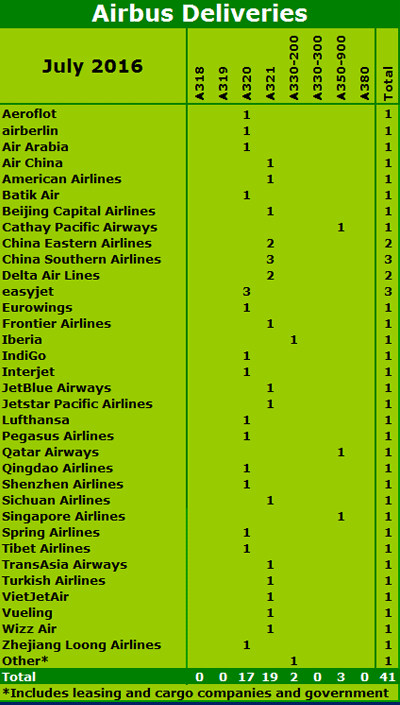 Airbus ended July with a total of 41 unit deliveries, which is 23 less than the company delivered in June, and eight less than it distributed during the corresponding month of last year.

In July, single-aisle deliveries were led by the A321 (19 units – down four from June), while the A320, which is usually the stronger performing of the two types when it comes to deliveries, was the second most popular unit (17 units – 12 less than in June). This means that a grand total of 36 single-aisle units were distributed to clients around the world in July, meaning Airbus delivered one more single-aisle unit than Boeing last month. A total of 15 airlines received the A321 in July (one less than June), with China Southern Airlines being the largest recipient, taking three of the type. China Eastern Airlines and Delta Air Lines each received two A321s. In relation to A320 deliveries, 15 airlines received the type into their respective fleets, with easyJet welcoming the most, with Europe’s second largest LCC accepting three A320s in July. No carrier welcomed both types of aircraft into their fleets last month, with the past few months seeing at least one airline receiving both the A320 and A321 within a one-month period.

In relation to the wide-body market, Airbus handed over five units in July, seven less than in June, and four less than in May. Following on from three consecutive months of the carrier distributing three A380s in a month (April, May and June), the European manufacture delivered none in July. Only the A330-200 and A350 were delivered to airlines in June, with Iberia and a leasing company picking up one each of the former, while Cathay Pacific Airways, Qatar Airways and Singapore Airlines all collected one of the latter in July. 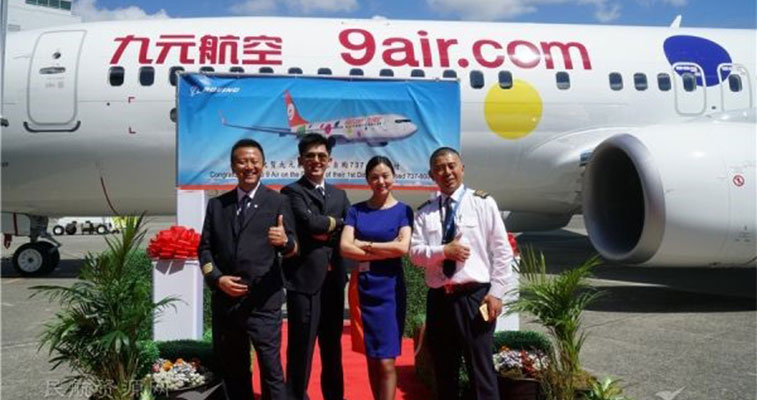 9 Air, the Chinese LCC which is a subsidiary of Juneyao Airlines that commenced operations in 2015, welcomed its brand new 737-800 from Boeing on 15 July, the US manufacturer’s first delivery after celebrating its 100th anniversary. The carrier has a firm order for 50 737-800s and –MAXs. 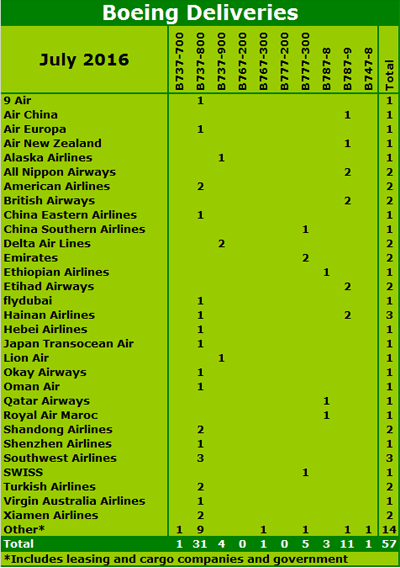 Boeing closed July with a total of 57 unit deliveries, 17 less than in June and 14 less than May. In July of last year, the American producer distributed 58 aircraft, one more than last month. A total of 36 single-aisle units were delivered to airlines in July, nine less than in June and one less than in July last year. A total of 31 737-800s (nine less than June) were delivered, while four 737-900s were (one more) accepted by the world’s airlines. One 737-700 was also delivered to the US Air Force. Ryanair, which was the largest recipient of the 737-800 in February, March, April and May, picking up eight of the variant into its fleet each month, did not collect one in July, just like it didn’t in June. However, Southwest Airlines, the LCC model on which Europe’s largest carrier was originally based upon, was the largest recipient of the -800 in July, collecting three of the type. American Airlines, Shandong Airlines and Turkish Airlines each received two. In relation to the four 737-900 unit deliveries, 50% (two) went to Delta Air Lines, with Alaska Airlines and Lion Air each collecting one.

An analysis of wide-body deliveries reveals that Boeing handed over a total of 21 units, eight less than in June, three less than in May, but two more than in April. Last month witnessed Boeing hand over 14 787s, the same as in June. All Nippon Airways, British Airways, Etihad Airways and Hainan Airlines were the largest recipients of the 787-9, with each collecting two. Of Boeing’s 787 deliveries, only four were the -8 type, with Ethiopian Airlines, Qatar Airways, Royal Air Maroc and a leasing company all receiving one each. Five 777-300s were distributed in July with Emirates, the world’s largest 777 operator, collecting two units.