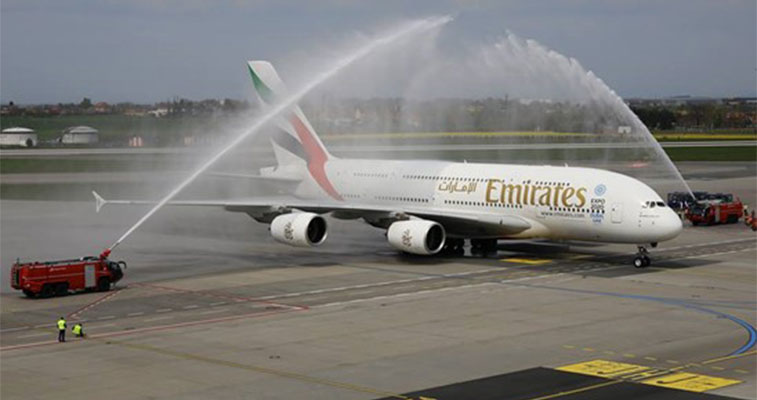 Emirates introduced the A380 onto its daily service between Dubai and Prague on 1 May. “Since its inaugural flight in July 2010, Emirates’ Dubai-Prague route has carried more than one million passengers and has been met with a consistent, strong demand,” said Bořivoj Trejbal, Emirates’ Country Manager for the Czech Republic. As a result of Emirates’ decision to fly the flagship aircraft on its Prague route, seat capacity to the Czech Republic capital has risen by nearly 46%.

Prague is the capital and gateway to the Czech Republic and the 14th largest city in the EU (1.27 million), slotting in between Milan in 13th and Sofia in 15th (based on 2015 statistics). According to the Czech Republic’s 2011 census, about 14% of the city’s inhabitants were from overseas (just under 150,000), the highest proportion in the country. Of this total, the top three expat nationalities in Prague are Ukrainian (34%) Slovakian (20%) and Russian (16%). It should be noted that Vietnamese and Chinese nationals are also close to having a double-digit percentage of expatriates in the city. Prague is served by Václav Havel Airport, a facility named after the Czech writer, philosopher, dissident and statesman who served as the nation’s first president after the Czech–Slovak split. For those of you who are interested in film trivia, the airport also posed as Miami International in the James Bond film Casino Royale.

On course for record year 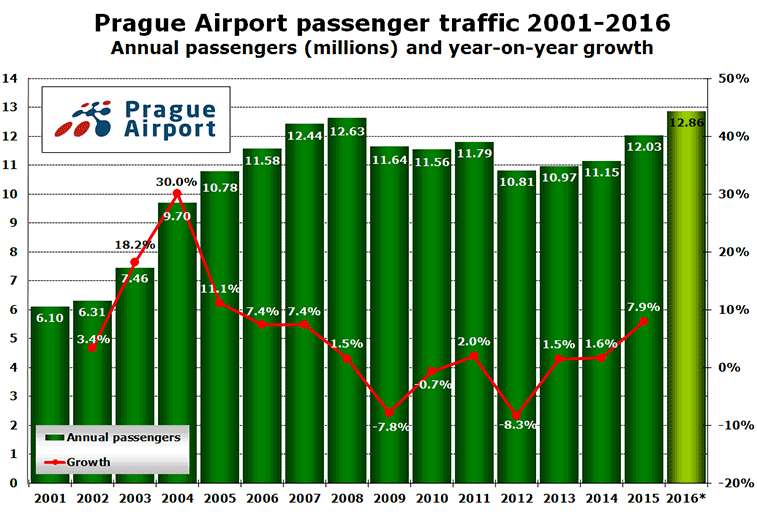 Looking at statistics for the first half of 2016, traffic at Prague is up 6.9% when compared to the same six-month period of 2015, with the Czech Republic capital airport welcoming nearly 5.6 million passengers. If this rate of growth was to be sustained throughout 2016, Prague can expect to welcome just shy of 13 million passengers this year, with anna.aero predicting that during the next six months the airport will welcome around just under 7.3 million passengers (highlighted in light green).

In 2015, Prague witnessed six consecutive months (May – October) where traffic surpassed one million passengers. In 2014 and 2013, the airport only delivered four months in each year where traffic passed this throughput. As a result of Prague’s growth, it has slightly increased the airport’s seasonality. Putting Prague’s monthly passenger figures for 2015 into anna.aero’s Seasonal Variation in Demand (SVID) calculator, the airport performs well, with it garnering a score of 7.88 – a ‘Good’ rating. However, with the growth in traffic at the airport, this has slightly worsened since 2014, where the airport registered a SVID score of 7.44.

Prague’s top 12 routes combined last year carried just under 4.9 million passengers, this represents around 41% of the airport’s overall traffic. Of Prague’s top 12 routes, it is the connections to London Stansted and Dubai which have outperformed the rest. Stansted has seen traffic between 2014 and 2015 grow by just under 65%, while the Dubai sector has seen 28% growth. The only other two routes to provide double-digit growth during the last year were Tel Aviv (20%) and Amsterdam (15%). During the five-year period between 2011 and 2015, Stansted and Dubai are the only top 12 destinations to have achieved average double-digit growth year-on-year, with Stansted’s average being 36% and Dubai 16%. Of the top 12 routes, the only ones to show an average annual decline are Paris CDG (-5.9%) and Milan Malpensa (-1.4%).

In relation to the first half of 2016, of Prague’s top 12 routes it is Amsterdam which has shown the greatest progress, with passenger traffic between January and June averaging a monthly increase of just under 22%. Amsterdam is Prague’s third largest route in 2016 so far after Paris CDG and Moscow Sheremetyevo. The top two performing routes of last year, Stansted and Dubai, are showing strong growth for the first half of this year. Traffic to the UK capital’s third largest airport has seen a 15% increase in the six-month period (23,100 more passengers than the first half of 2015), while Dubai has seen an improvement of 13% (21,500 more passengers). 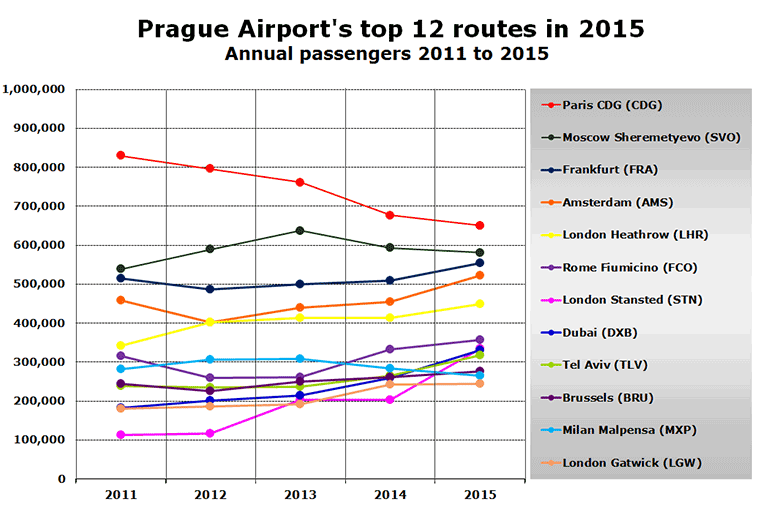 During the past year Prague has gained connections to 23 new non-stop destinations, with Toronto Pearson (50th largest route in relation to seat capacity; served one-stop via Montreal on Air Transat), Eindhoven (58th) and Birmingham (66th) being the biggest three of the new routes. Over the last 12 months the airport has also done something that most modest-sized European airports dream of, gaining scheduled service to China. However Prague has gone one step (maybe even two) further. by not just gaining one, but three links to the Asian country. Beijing (Hainan Airlines; launched 23 September; 73rd largest route) Shanghai Pudong (China Eastern Airlines; 23 June; 69th) and Chengdu (Sichuan Airlines; 12 August; 108th) are the new Chinese destinations to now grace Prague’s departure board. As well as Toronto and the three Chinese destinations, in relation to long-haul developments the airport has also welcomed a new service to Riyadh (117th; 16th largest new route), a sector recently launched by Czech Airlines. This summer Prague is connected to 147 non-stop destinations, a net gain of 10 when compared to 2015. Some of the destinations dropped from Prague during the past 12 months include Paris Orly (Transavia), Moscow Vnukovo (Transaero Airlines), Bremen (Ryanair), Belfast International (Jet2.com), Stavanger and Almaty (both Czech Airlines).

Seat capacity up 15% this summer

Of the 60 airlines serving Prague this summer, nine are new carriers, namely: Eurowings (0.8% of monthly seats); Air Cairo (0.7%); Air Canada Rouge (0.4%); China Eastern Airlines (0.4%); Hainan Airlines (0.3%); Luxair (0.2%); Croatia Airlines (0.2%); Sichuan Airlines (0.1%) and Sprint Air (<0.1%). During the past year the airport has only lost one airline from its roll call, with Transaero Airlines no longer serving the city due to its demise. In welcoming nine new airlines, this growth spurt has helped to increase Prague’s monthly seat capacity this summer by just over 15%. 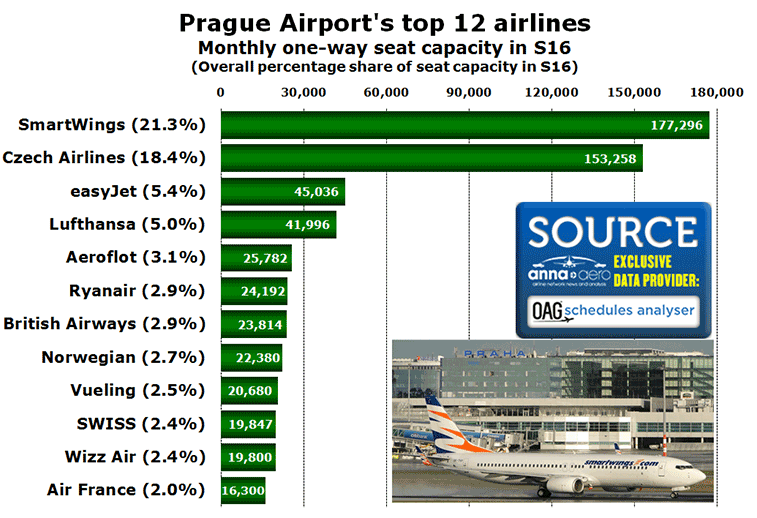 Looking at the airport’s top 12 airlines, it is SmartWings that remains the number one carrier, with it having grown its seat capacity by 18% during the past 12 months. However national carrier Czech Airlines is gaining ground on the LCC after it published a growth in capacity of 22% during the same time period. Lufthansa and Wizz Air are the only two carriers in the top 12 to not report growth this summer, with the former highlighting a drop of 1.0%, while the ULCC is down 0.9%.

Looking at carriers which serve Prague from destinations outside of Europe, the past 12 months have been very encouraging indeed. Emirates and flydubai have both increased their presence on the city pair to Dubai, with the MEB3 member upgrading its daily service to an A380, replacing the 777-300, while the LCC has upped its weekly frequency. Overall Emirates’ schedule change has resulted in it posting a growth of 46% in monthly seats (5,000 seats), while flydubai is up 72% (2,000). Elsewhere in the long-haul market, Delta Air Lines has increased its seat offering by 32%. Korean Air’s decision to introduce the 747-8 onto its service from Seoul Incheon has helped it achieve a near 11% growth in seats, while Air Transat is up 86% on its route from Toronto via Montreal. However, it is not just the long-haul sector which has seen great improvements in capacity. Brussels Airlines (+15%; 22nd largest carrier), LOT Polish Airlines (+11%; 23rd), Alitalia (+19%; 33rd); Ukraine International Airlines (+16%; 34th); HOP! (+41%; 41st); Azerbaijan Airlines (+16%; 48th); Bulgaria Air (+10%; 49th); and Tunisair (+136%; 51st) have all reported either double- or triple-digit growth.

What long-haul does Prague want next?

Looking at the airport’s website, here is a table of the long-haul destinations that Prague is hoping to attract connections to:

It comes of no surprise to see that Hanoi is the number one destination that the airport’s air service development team is hoping to attract, with the Vietnamese community being the largest expatriate nationality in the city that does not have a direct service to its home market. With Prague now being connected to three Chinese cities, despite having a smaller expatriate market, a service to Hanoi should be feasible. In relation to Eastern Europe only Moscow’s Sheremetyevo and Domodedovo airports have connections to Vietnam, while Paris CDG, Frankfurt, London Heathrow and Istanbul Atatürk are the only other European gateways to have a direct service to Vietnam. Both British Airways and LOT Polish Airlines have celebrated their 70th anniversaries from London Heathrow and Warsaw Chopin to Prague recently, with each carrier showcasing the feat they achieved with cake. The UK national carrier has increased capacity on its service from Heathrow by 3.8% during the past 12 months, while the Polish airline has increased its presence at Prague by just under 11%.