Nepal welcomes three new carriers; overall capacity to the nation down 3.9%; Saudi Arabia and Sri Lanka to be next country markets? 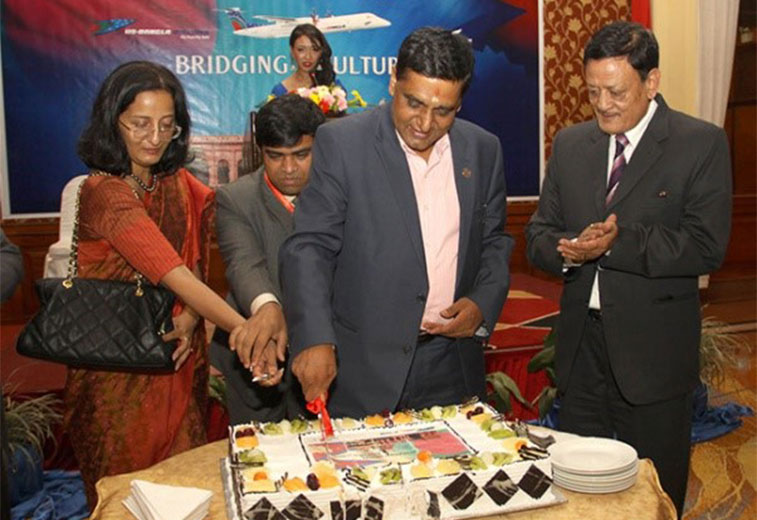 US-Bangla Airlines commenced its first international operations from Dhaka on 15 May, with its first non-Bangladeshi route being Kathmandu, the capital of Nepal. The carrier is one of three new airlines to serve Nepal this year, with the others being Himalaya Airlines and Druk Air. With it welcoming these new airlines, Nepal is served by a total of 28 carriers this summer.

Wedged between the Himalayas and the steamy Indian plains, Nepal is a land of snowy peaks and Sherpas, yaks and yetis, as well as monasteries and mantras. Sitting snug between the economic powers and densely populated nations of India and China, Nepal itself has a population of around 26.5 million (based on 2011 census data), while the landlocked nation all welcomes around 800,000 foreign tourists per annum. With the motorway infrastructure in Nepal being somewhat non-existent, and the capital of Kathmandu not being connected by rail (the country only has a 59-kilometre railway line at the Indian border), aviation is a vital lifeline. As of 2002, it is believed that Nepal has around 45 airports, of which nine have a paved runway. Kathmandu Airport, otherwise known as Tribhuvan International Airport, is the nation’s only international facility. With a majority of Nepal’s domestic operations being operated on small regional carriers, it is hard to give a definitive outlook of the nation’s overall operation, as many of these small operators do not publish their schedules.

Buddha Air is a regional airline based in Kathmandu which operates 420 weekly flights (based on w/c 16 August). The airline currently operates to 11 destinations from the Nepalese capital using nine aircraft (three ATR 42s; three ATR 72s and three Beech 1900s). Its only route that is not served from Kathmandu is a domestic connection between Tumlingtar and Biratnagar. It does offer flights to one international destination from Kathmandu, with this being a link to Varanasi in India. It is Nepal’s largest airline, with it commanding 24% of monthly seat capacity. 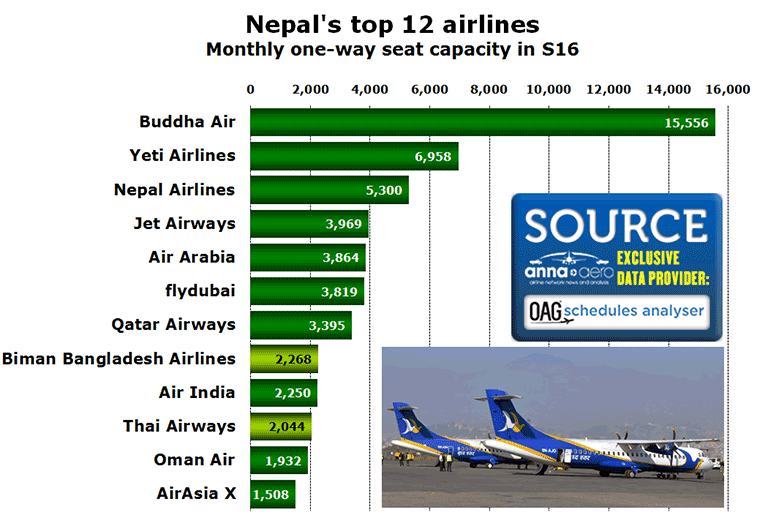 In relation to Nepal’s top 12 airlines, two carriers (both highlighted in light green) are new to the S16 top 12 list, with Thai Airways (seat capacity up 32%) and Biman Bangladesh Airlines (47%) replacing Malaysia Airlines (-50%) and Etihad Airways (-46%) in the field, with the latter two now sitting in 17th and 19th places respectively.

Of the 920 weekly flights to operate from Nepal on 28 serving airlines, 3.0% (28 weekly flights) are on wide-body aircraft, with Qatar Airways (5.2% of monthly seat capacity), Thai Airways (3.1%), Turkish Airlines (1.8%), Dragonair (1.4%) and Korean Air (1.2%) being the only carrier’s to have wide-body operations into the country. It should be noted however that some of these airlines also use single-aisle aircraft on their services into Nepal.

Himalaya Airlines is the largest of the three new carriers to grace Nepal’s airline roll call, with the other two being Druk Air, which offers a daily service between Kathmandu and Paro in Bhutan (launched 28 March), and US-Bangla Airlines which flies between Dhaka and Kathmandu thrice-weekly (launched 15 May). Coincidentally, Kathmandu was the first international destination for the Bangladeshi regional airline. 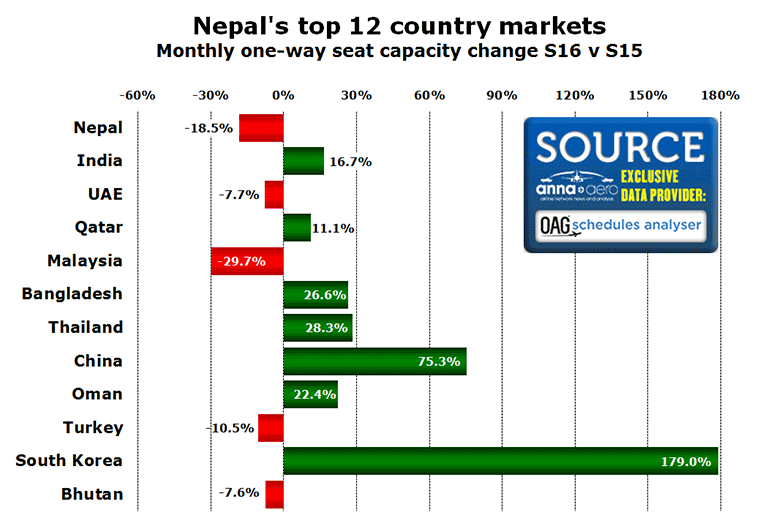 Nepal is connected to 13 international country markets in S16, the same amount that it was connected to last summer, with no markets being dropped or gained. In relation to overall seat capacity, Nepal has witnessed a drop of 3.9% when compared to S15. Outside of the top 12 the only other country markets which serve Nepal are Hong Kong, which has witnessed a 5.6% downfall in seats, and Singapore which is up 7.7% when compared to the same time period of last year. The biggest spike for a country market however has come from South Korea (11th), with capacity up 179%. Although this market only accommodates 1.3% of overall seat capacity in Nepal, the reason it has seen this surge in seats is due to Korean Air increasing frequency on its 777-200 operated route between Seoul Incheon and Kathmandu from weekly to thrice-weekly. In relation to cuts, Malaysia took the biggest hit, with capacity down nearly 30%, with services to the country accounting for 6.6% of weekly seats from Nepal.

Saudi Arabia and Sri Lanka to be connected next?

According to Himalaya Airlines’ website, it intends to add flights from Kathmandu to Delhi, Beijing, Lhasa, Chengdu, Colombo, Bangkok, Hong Kong and Dammam in the near future. With Colombo and Damman it would bring two new country markets to Nepal’s non-stop offerings. The carrier has already operated two return charters to Colombo, with the first one taking off before the airline’s inaugural scheduled service to Doha. So with the intentions of the carrier well known, and one of the markets having been tested, albeit on a small scale, it is highly likely that Saudi Arabia and Sri Lanka will become Nepal’s next country markets. Himalaya Airlines operated a one-off charter to Colombo from Kathmandu on 12 April with another having taking place at the end of May. The airline intends to offer scheduled services to the Sri Lankan city in the near future, with it also wanting to add flights to Damman. If these planned services do take-off, it would mean that Nepal would become connected to the country markets of Saudi Arabia and Sri Lanka non-stop. Himalaya Airlines itself commenced scheduled operations between Kathmandu and Doha on 31 May, with the Nepalese airport welcoming the new service with a traditional arch welcome. As a result of the airline commencing operation, it has become Nepal’s 18th largest airline.