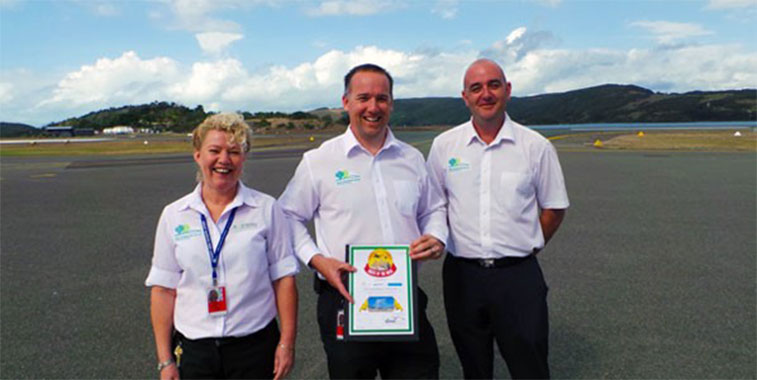 While Virgin Australia Airlines has started new services like Sydney to Tamworth in May 2015, and Rarotonga to Christchurch in June this year (according to anna.aero New Route Database), the latest route launch pictures we can find come from its Melbourne to Hamilton Island launch three years ago (it was Route of the Week). Despite this lack of new route development dynamism, Australia’s second largest carrier has plans to start Beijing and Hong Kong services in 2017.

Established in 1999 as Virgin Blue, Virgin Australia Airlines, is Australia’s second biggest airline in terms of weekly seats (25%), with it sitting behind Qantas (34%). With the third (Jetstar Airways – Qantas) and fourth largest (Tigerair Australia – Virgin Australia) players in the hands of the #1 and #2 airlines, effectively these two carriers command between them nearly eight in every 10 seats flown in Australia. Virgin Australia currently operates to 71 destinations in 13 countries, offering in excess of 530,000 weekly one-way seats, according to OAG schedule data for the week commencing 15 August. 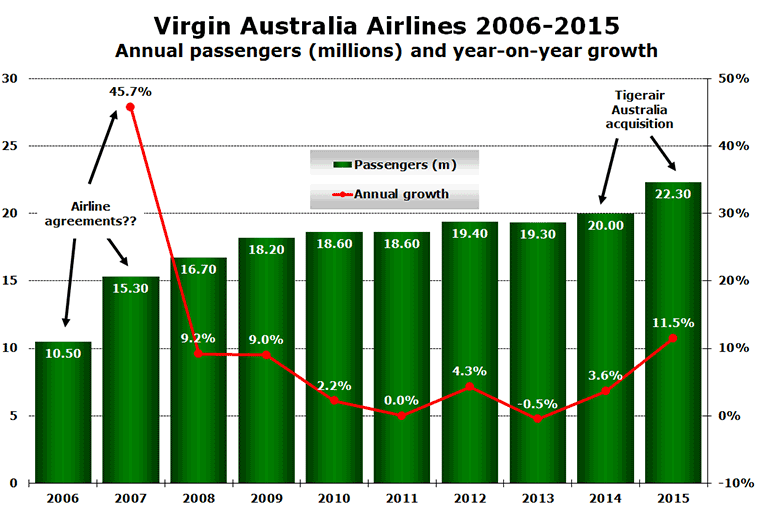 Traffic over the last 10 years has more than doubled for the airline, growing from 10.5 million passengers in 2006 to over 22 million last year. Investigating the significant spike in activity between 2006 and 2007, the only piece of information that may account for some of that growth is the fact that Virgin Australia signed agreements with Emirates, Hawaiian Airlines and Malaysia Airlines in this period. Looking at the double-digit growth between 2014 and 2015, our data elves believe this significant increase in the passenger statistics will be as a result of the acquisition of Tigerair Australia and its traffic figures being included in those of the Virgin Australia Group. In terms of how 2016 is progressing, weekly seats are down marginally (1.1%) since the same week last August, so a flat year is anticipated for the carrier.

The first nine airports of Virgin Australia’s top 12 have gone unchanged in terms of their respective positions since last August. The top 12 airports represent 83.1% of the airline’s weekly seats this August, up slightly on last year’s figure (82.7%). The fastest growing of the top dozen airports is Canberra, which has posted an 11% increase in weekly seats year-on-year. The top three airports of Sydney (+1.0%), Melbourne (+0.2%) and Brisbane (-1.2%) have had their respective weekly capacities tweaked, with the three offering less than 200 extra seats than they did 12 months ago. 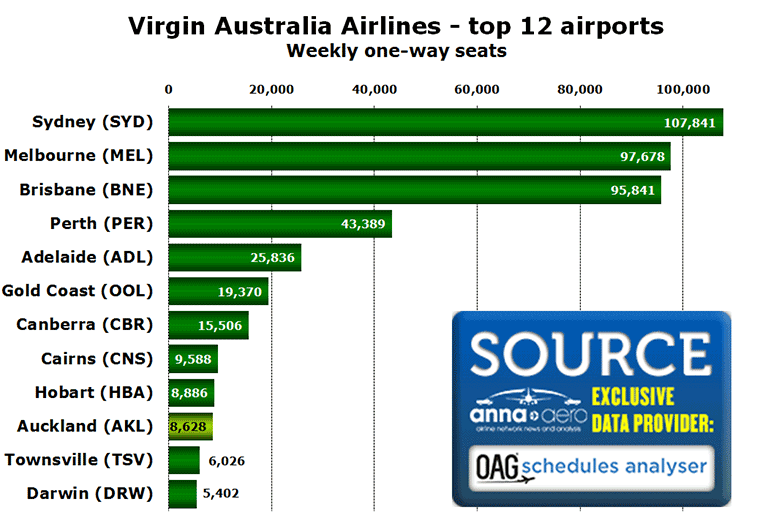 Highlighted in light green, is the airline’s only international sector to grace its top 12 destinations this year, namely the trans-Tasman destination of Auckland. A year ago, Denpasar would have been in this graph too, however a 50% capacity cull has seen the city fall from 11th to 18th, with its place in the top 12 being taken by Townsville ‒ the only airport which is a new entrant. Last year the airline operated to 76 destinations, but despite services to Roma and San Francisco (both of which appear to be for a limited period only) being added this August, the departure of Abu Dhabi (UAE), Phuket (Thailand), Esperance, Derby, Windarling, Carnavon and Woodie Woodie (all domestic) has reduced the carrier’s network of destinations to 71.

With the loss of overseas country markets of UAE (thrice-weekly service from Sydney to Abu Dhabi) and Thailand (four times weekly service from Perth to Phuket), it is perhaps not surprising that Virgin Australia’s domestic network has marginally increased its share of the carrier’s seats, up from 92.8% last August to 93.4%. Given the scale of the home market, domestic capacity has been omitted from the following graph, with the carrier’s remaining 12 country markets represented. Weekly seats to New Zealand have increased by 10% since last August, growing from around 15,500 to over 17,000. 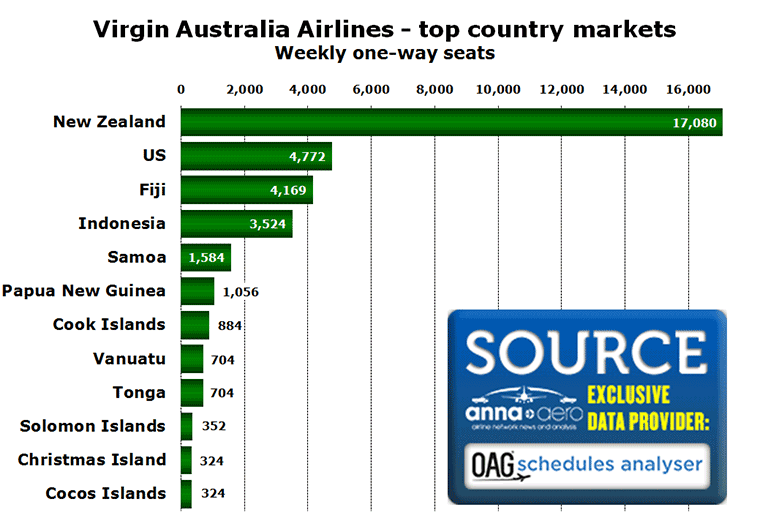 The fastest growing country markets, albeit from small bases, were Vanuatu (+33%) and Cook Islands (+25%). By contrast, capacity is down by 50% on services to Indonesia, with seats to the Solomon Islands also witnessing a marked fall (-33%), but in absolute terms, barely noticeable (176 seats). Virgin Australia now offers 10 weekly flights from Brisbane to Denpasar, nine weekly from Sydney and a weekly operation from Port Hedland. A year ago it also had eight weekly flights from Perth, a daily service from Melbourne and five weekly flights from Adelaide to the tourist destination in Bali.

Beijing and Hong Kong next??

According to recent media reports, Virgin Australia has begun planning for its first Chinese routes, which it expects to launch in 2017. The carrier has “started the process” of securing slots, CEO John Borghetti said. It has apparently told Australian regulators that it intends to operate to Beijing and Hong Kong, although it has not confirmed which Australian cities it will fly from. Virgin Australia has previously indicated it would use its A330-200s for these routes, but Borghetti said the carrier has yet to decide aircraft type.