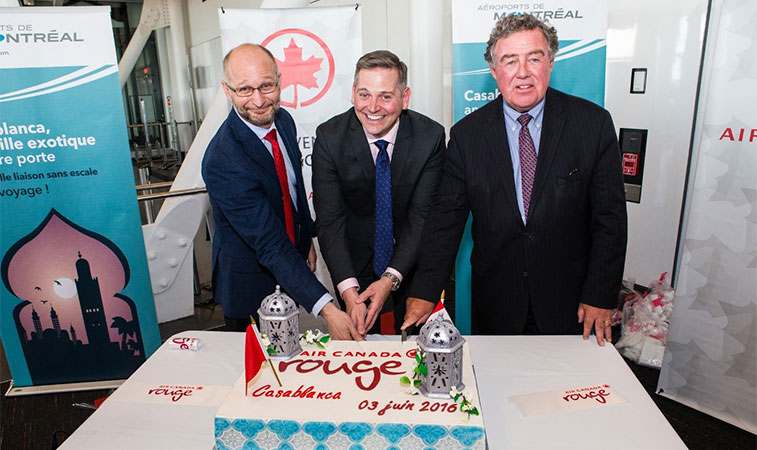 Air Canada Rouge’s inaugural flight to Casablanca was welcomed with cake on 3 June at Montreal Airport. Casablanca is one of 17 new destinations on the carrier’s route map this summer, with overall seat capacity for the airline in S16 up 31% when compared to S15.

Air Canada Rouge, a low-cost subsidiary of Air Canada, was established in December 2012. It commenced its first operations on 1 July 2013 with initially four aircraft – two A319s and two 767-300s. According to ch-aviation as of August 2016, the carrier now has 20 A319s, five A321s and 18 767-300s, meaning since its first month of operations it has gone from four aircraft to 43. It should be noted that not all of these aircraft have been passed down from Air Canada mainline, with some of the A321s being brand new.

Since its inception in 2013, Air Canada Rouge’s monthly seat capacity has grown rapidly, helped by Air Canada mainline aircraft being consigned over to its subsidiary. With this expansion it comes of no surprise to see such high levels of growth during its second 12 months of operation when compared to the first year, when the average month-on-month growth in capacity was above 1000%. However, as the airline has developed, this growth has become more stable, with the past 12 months indicating an average month-on-month growth of 35%. 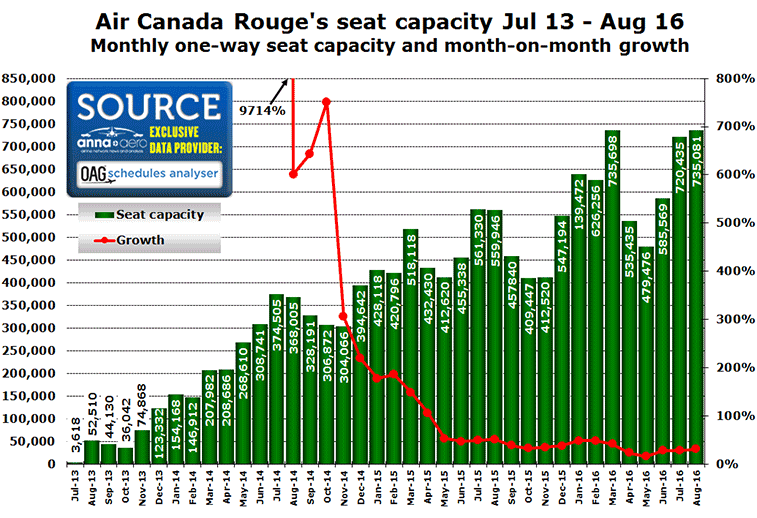 Fort Lauderdale is the biggest new airport; Pearson has 32% of seats

During the past year, Air Canada Rouge according to OAG schedules has added 17 airports to its summer network during the past 12 months, with the new destinations being: Fort Lauderdale (sixth largest airport – highlighted in light red below; 3.4% of monthly seat capacity in S16); Miami (14th; 1.5%); London Gatwick (16th; 1.2%); Charlottetown and Deer Lake (joint 17th; 1.1%); Casablanca and Warsaw Chopin (joint 27th; 0.7%); Barbados and Havana (joint 35th; 0.6%); Glasgow, Prague and Budapest (joint 38th; 0.5%); Mexico City (42nd; 0.4%); Fort Myers (46th; 0.3%); Panama City and Samana (joint 50th; 0.2%); and Sarasota (58th; 0.1%). While some of these are new destinations for Air Canada Rouge, it should be noted that some were served in S15 by Air Canada mainline, with the LCC now operating the services this summer. In relation to the inauguration of Gatwick flights, anna.aero was fortunate enough to attend the arrival of the carrier’s first service into the London airport, and even produced the launch cake. 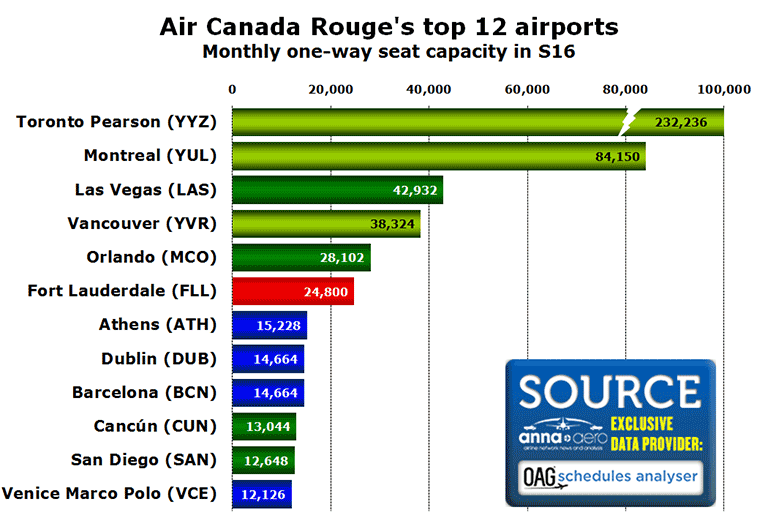 Toronto Pearson remains as the number one airport for Air Canada Rouge, with it growing by 63% in relation to monthly seats when compared to S15. The airport is home to just under 32% of the airline’s overall monthly seat capacity, growing from the 25% majority it held in S15. The only other airport which occupies a double-digit percentage of the airline’s departing seats is Montreal, with it being home to over 11%, up from 9.5% last summer. What should be noted is that only three of the carrier’s top 12 airports (highlighted in light green) are in Canada, with four (highlighted in blue) being in Europe. Of the airports which Air Canada Rouge served last summer, four have achieved the feat of triple-digit growth. San Diego (11th largest airport; 200% growth in monthly seats), San Jose (43rd; 133%), Puerto Vallarta (51st; 107%) and Puerto Plata (53rd; 125%) have all welcomed significant capacity gains. In relation to net gain in seats, it is Pearson which has welcomed the most additional seats (+90,000 additional seats in S16), followed by Montreal (+31,100) and Las Vegas (+13,100). Outside of the top 12, the only airport to welcome a five-digit increase in net seats is the new market of Miami (+10,700).

As can be seen from the table, the top three regions to have witnessed growth during the past 12 months include Central America, the Caribbean and South America. Africa is new to the carrier’s route map, a result of flights between Montreal and Casablanca starting this summer. The only continent where Air Canada Rouge does not serve is Australasia. However, with Air Canada having just launched flights between Vancouver and Brisbane, it seems unlikely that its subsidiary will be seen in Australasia soon, especially given that the 767-300, the largest aircraft Air Canada Rouge operates, would struggle to make the Pacific Ocean flight non-stop. 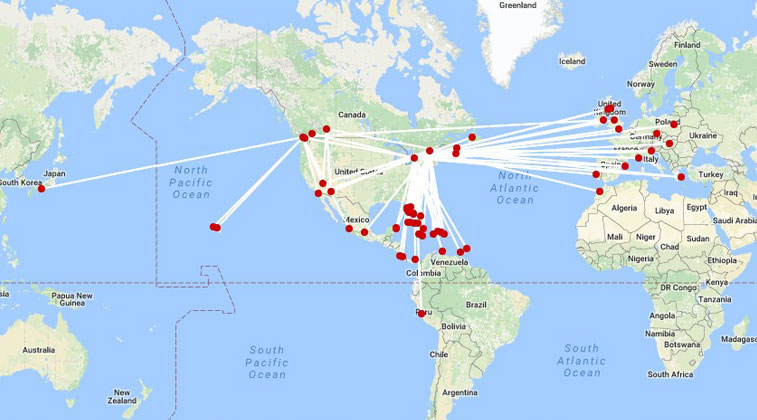 Air Canada Rouge’s route map in August 2016. During the past year the airline has seen a net increase of 12 airports to its network, with Africa becoming the latest continent to be served. The only airport it serves in Asia is Osaka Kansai, while the carrier has seen a net gain of four airports in Europe. Lima in Peru is currently the carrier’s only South American destination.