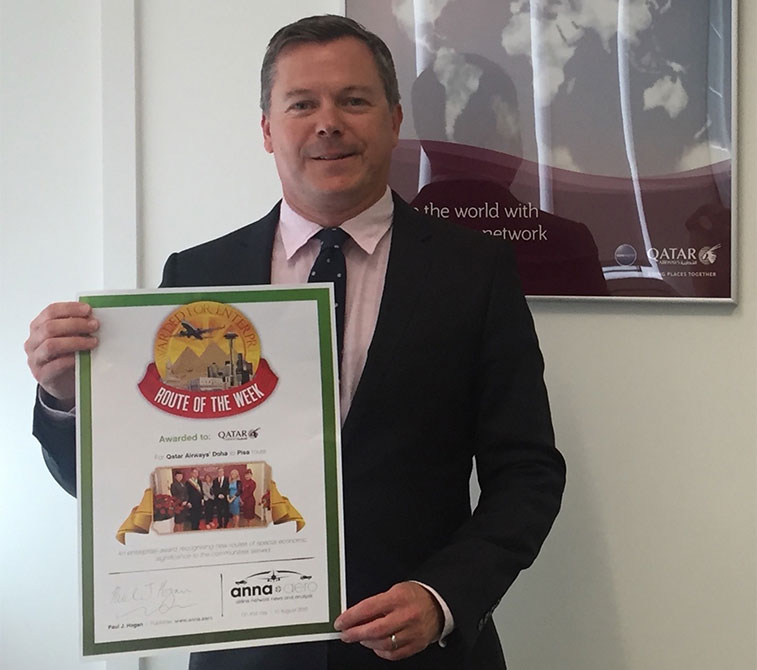 This week witnessed Qatar Airways celebrate its Route of the Week title, given to the MEB3 carrier by anna.aero for its new connection to Pisa, the carrier’s fourth Italian destination. Seen celebrating with the prestigious award is Jonathan Harding, Qatar Airways’ SVP for Europe. During 2016 the airline has added Adelaide, Atlanta, Birmingham (a route launch anna.aero attended), Boston, Los Angeles, Marrakech, Pisa, Ras Al Khaimah, Sydney and Yerevan to its network. The MEB3 carrier is also the airline sponsor for this year’s anna.aero-Budapest Airport Runway Run. If you’d like to take part in this year’s run, register at this link. Budapest Airport celebrated its Cake of the Week victory, with anna.aero awarding the prestigious award to the Hungarian capital airport for the running shoe-themed cake it presented at the launch of Wizz Air’s service to Varna. Seen celebrating the award outside the terminal and out on Runway 13R-31L, the venue for the anna.aero-Budapest Airport Runway Run 4.0 which takes place on 3 September, are the airport’s: Máté Ritter, Airline Development Manager; Kam Jandu, CCO; and Balázs Bogáts, Head of Airline Development. If you’d like to take part in this year’s anna.aero-Budapest Airport Runway Run, register at this link. 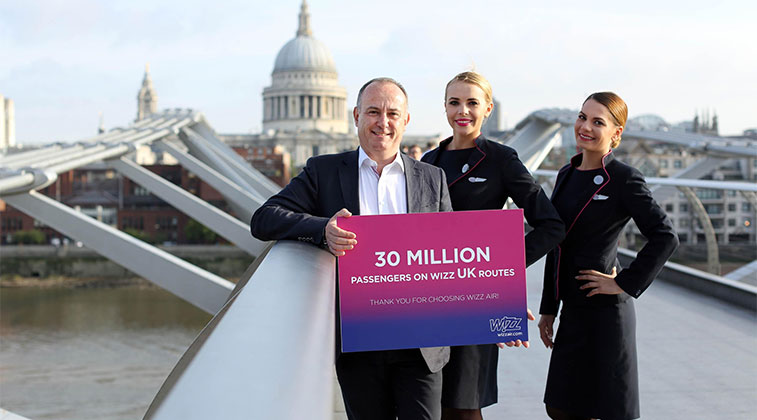 Wizz Air this week celebrated the milestone of carrying 30 million passengers from the UK since its first flight to the nation in 2004, a route between Katowice and London Luton. Wizz Air’s CCO, Owain Jones commented by saying: “We’re proud to have reached this major milestone of carrying 30 million passengers – equivalent to half the population of the UK – and we want to thank our loyal customers for continuing to choose Wizz Air for its low fares, diverse and attractive route network from airports across the UK and great service onboard our young fleet.” In the UK, Wizz Air flies from nine airports to 14 countries, and in the past six months has launched 13 new UK routes including services from London Gatwick to Bucharest, Doncaster Sheffield to Cluj-Napoca and Birmingham to Sofia. 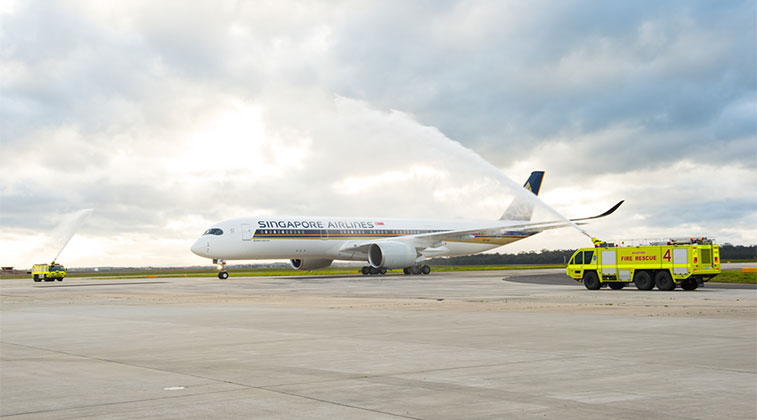 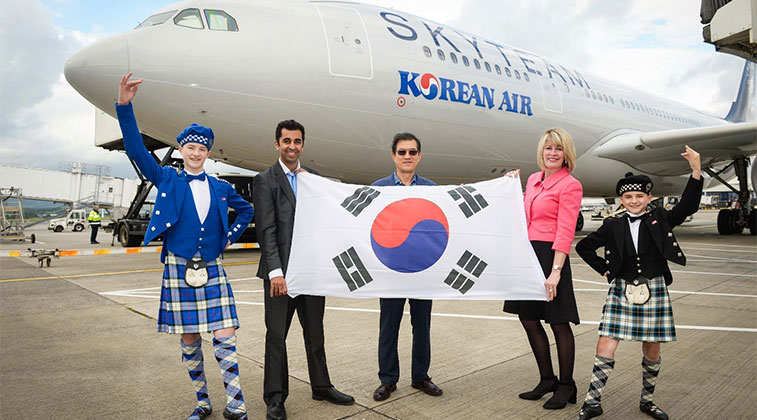 Glasgow Airport welcomed the first of three charter flights by Korean Air from Seoul Incheon on 5 August. It is expected that the services will provide over 1,000 South Korean tourists to Scotland. Hanjin Travel, one of South Korea’s leading travel companies, has played a major role in developing the country’s tourism industry. In recent years, it has been extending its European route network with the launch of similar charter services to Oslo and Marseille. Hanjin Travel has launched the Glasgow service with a view to introducing further flights in 2017. Amanda McMillan, MD of Glasgow Airport, said: “Securing the country’s first direct service with South Korea is a significant step both for Glasgow Airport and Scotland’s tourism industry. We are honoured Korean Air and its sister company Hanjin Travel have chosen Glasgow Airport as their customers’ gateway to Scotland.” Seen holding the flag along with McMillian are Scotland’s Minister for Transport and the Islands, Humza Yousaf, and Oh Sang Kwon, President of Hanjin Travel. Flights will be operated on A330s. On 10 August Cluj-Napoca Airport celebrated passing the one million passenger milestone for 2016 so far, a feat which was marked one month earlier than last year. This is the sixth year in which Cluj-Napoca has hit this milestone. The lucky passenger, Marius Pop, was travelling with Aegean Airlines from Heraklion. The week before, the airport welcomed the arrival of Atlasglobal from Istanbul Atatürk, a route which the carrier serves thrice-weekly. Another boost to passenger numbers will come later this year when Turkish Airlines starts the same airport pair on 1 September, offering a second connection from Cluj-Napoca to one of the world’s leading aviation hubs. 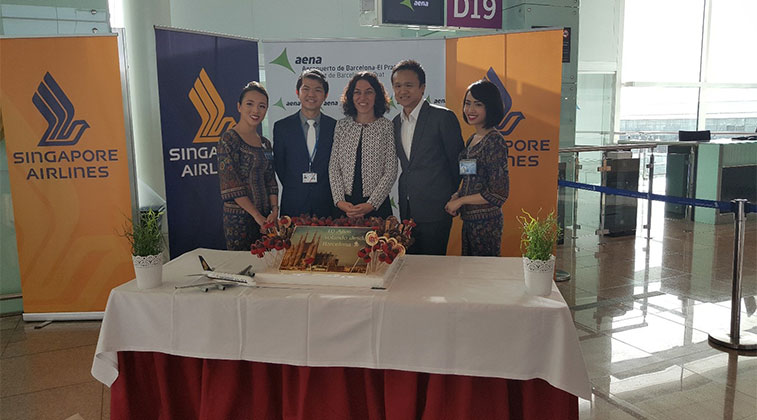 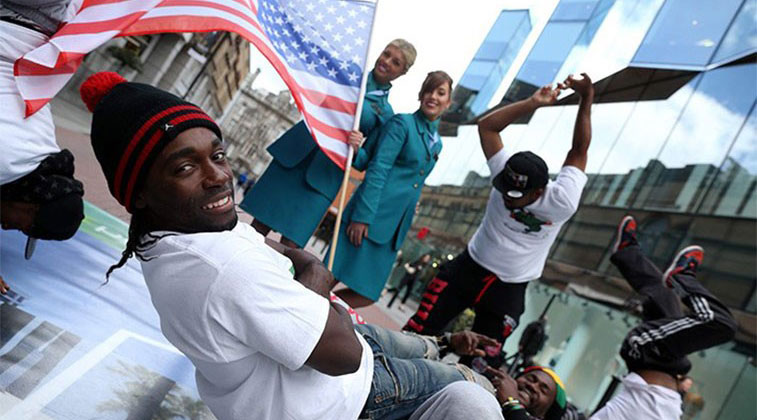 On 10 August Aer Lingus was confirmed as the fastest growing airline between Europe and North America over the last six years. The airline currently flies to eight North American cities on 10 transatlantic routes, with the last launch being in May between Dublin and Los Angeles. A further two US destinations will join the network next month, supporting its fastest growing title. Aer Lingus will begin a daily service on 1 September from Dublin to New York Newark and a four times weekly service to Hartford in Connecticut on 28 September.