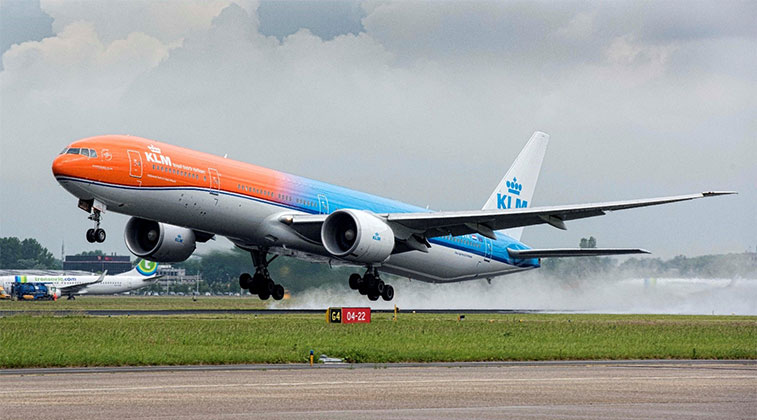 On 14 June 2016 KLM unveiled a 777-300 painted partly in orange. The aircraft was used to fly the Dutch Olympic team to Rio de Janeiro. The well-known KLM blue is combined with orange highlights. The transition between the two colours features aspects of the Dutch flag. According to the airline, the combination emphasises KLM’s Dutch roots and pride in the national colour of the Netherlands. [Note: For keen aircraft model collectors you can buy a smaller version of this aircraft for around €30 from the on-line KLM shop.]

The Dutch flag-carrier KLM continues to operate one of Europe’s most diverse hubs from its home base at Amsterdam Airport Schiphol. The airline, which will celebrate its 97th birthday in October, is nowadays part of the Air France-KLM Group, with both carriers being members of the SkyTeam alliance. Among European legacy carriers operating a global network, KLM this summer ranks fifth for the number of destinations served non-stop from a single airport. If we only consider international destinations, KLM remains unchanged on 135, while British Airways drops to 133 and Air France falls to 131. However, Lufthansa at Frankfurt is still ahead with 150 international routes. Since last summer, KLM’s network has seen the addition of 10 new destinations. Unfortunately the carrier has also dropped five non-stop routes, resulting in a net gain of five routes. 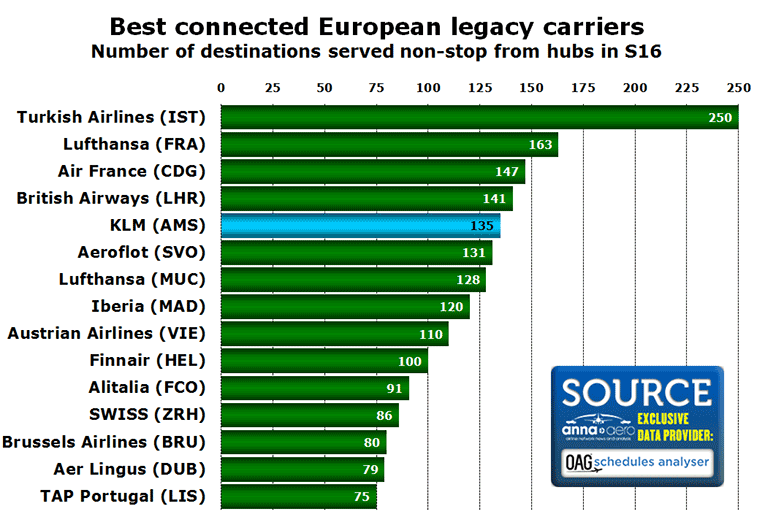 Since merging with Air France, the group has tended to only report passenger numbers at the group level, rather than broken down between Air France and KLM. However, in terms of ASKs it is clear that KLM has been growing steadily for most of the last decade. Current schedule data indicates that ASKs will be up just under 4% in 2016 and since 2006 the airline has grown in size by around 40%. 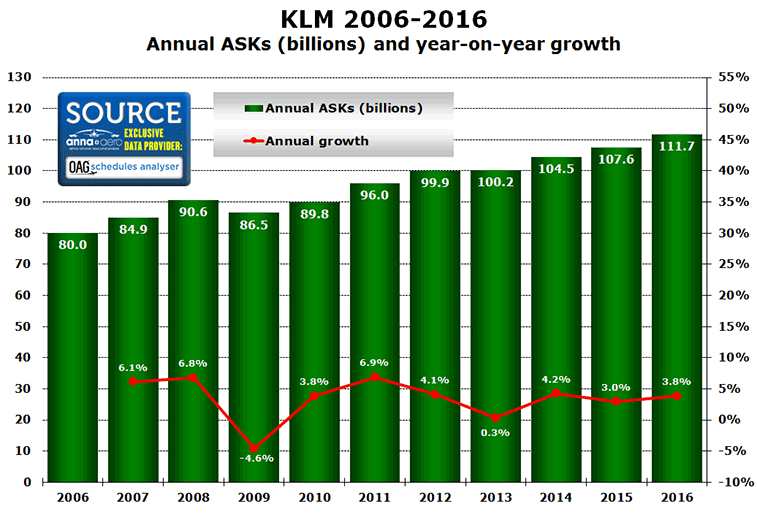 Interestingly, the most recent traffic statistics for the group are broken down by carrier. This reveals that in the first half of 2016 KLM has carried 14.4 million passengers (+7.1%) at a load factor of 86.2% (up 1.5%). Reflecting the launch of a number of short-haul routes during the last year, ASKs (Available Seat Kilometres) are up only 2.7% in the first six months of this year. Passengers on short and medium-haul routes are up 9.1% to 9.5 million while long-haul demand is up 3.4% to 4.9 million.

Analysis of KLM’s leading routes in terms of ASKs reveals that in the first week of August the airline’s top three routes are to Shanghai Pudong, Kuala Lumpur and Los Angeles. The top 15 routes are spread across 12 different countries with the US having three routes (shown in bright green) and Japan two. All 15 routes are served at least daily, but only Los Angeles and New York JFK are served twice-daily every day. 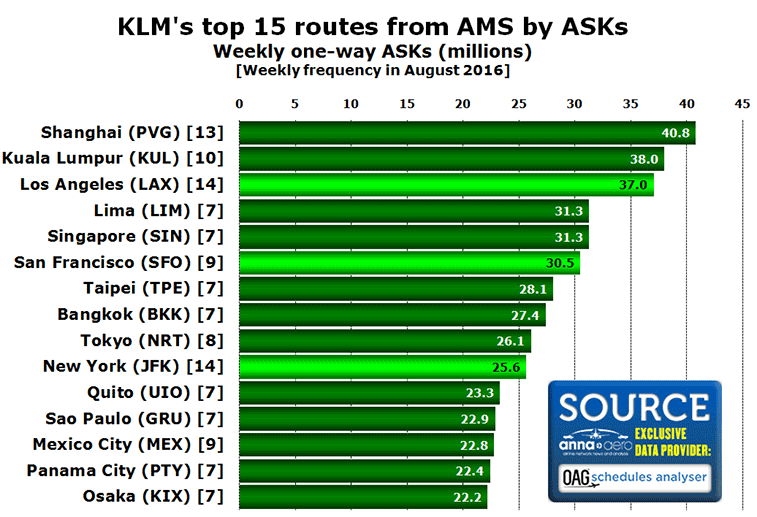 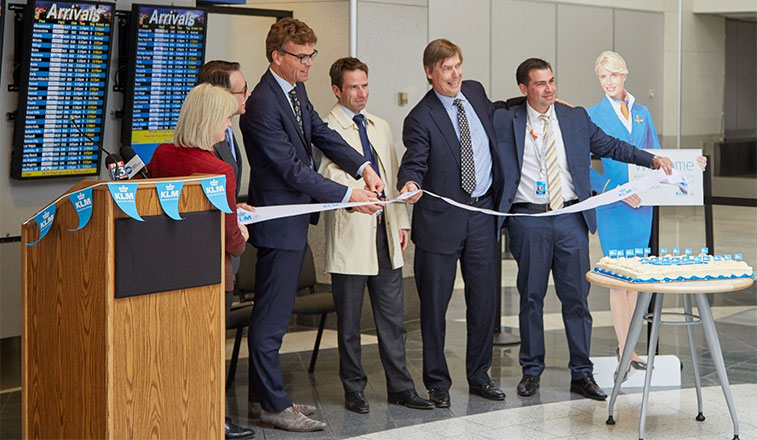 On 5 May 2016 KLM began serving Salt Lake City in Utah. The airport is a major hub for fellow SkyTeam member Delta Air Lines. At the same time KLM chose not to resume flights to Dallas/Fort Worth. This summer KLM flies to eight US cities with a total of 68 weekly flights: Los Angeles and New York JFK (14 each), San Francisco (nine), plus daily flights to Atlanta, Chicago, Houston and Washington, as well as the new thrice-weekly service to Salt Lake City.

US market bigger than second and third combined 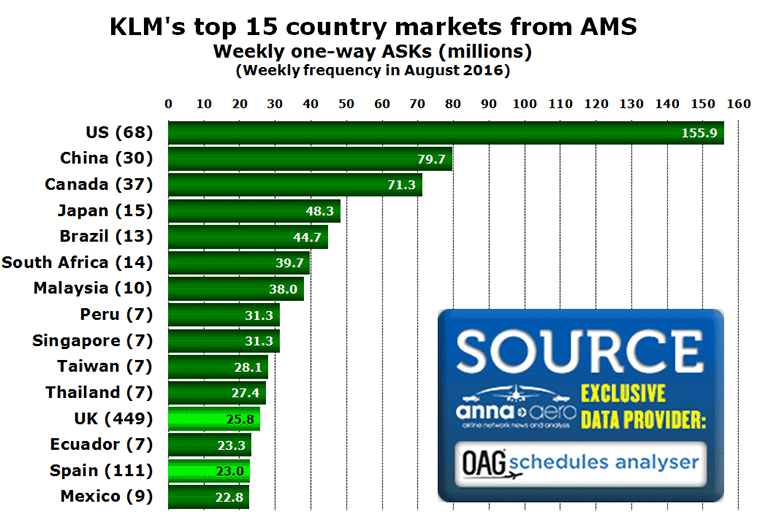 Broken down to a region level, Europe accounts for over 80% of the airline’s flights and two-thirds of weekly seat capacity. However, in terms of ASKs, Europe ranks only fourth (with 17%) behind Asia (28%), Latin America (21%) and North America (19%).

As mentioned previously, since last summer KLM has added a number of new routes from its Amsterdam hub:

However, a number of routes have also been suspended including Cologne Bonn (ended 31 January 2016), Dallas/Fort Worth (a seasonal summer-only service which ended in October 2015) and Fukuoka (last flown in early January 2016). Other routes that were served non-stop are now served via an intermediate stop.

In October the airline is planning to resume service to Tehran after a three-year hiatus, though this start date has already been put back once. Services to Colombo and Miami are also set to resume this winter, while Dublin will also be added to the airline’s network. The Irish capital was last served by KLM in the year when England last won the football World Cup, 1966. On 16 May 2016, KLM introduced a daily service between Dresden in Germany and Amsterdam. The German airport is connected to Lufthansa’s Frankfurt and Munich hubs, as well as SWISS’ Zurich hub, but is not connected to either Air France’s Paris CDG hub or British Airways’ London Heathrow hub.