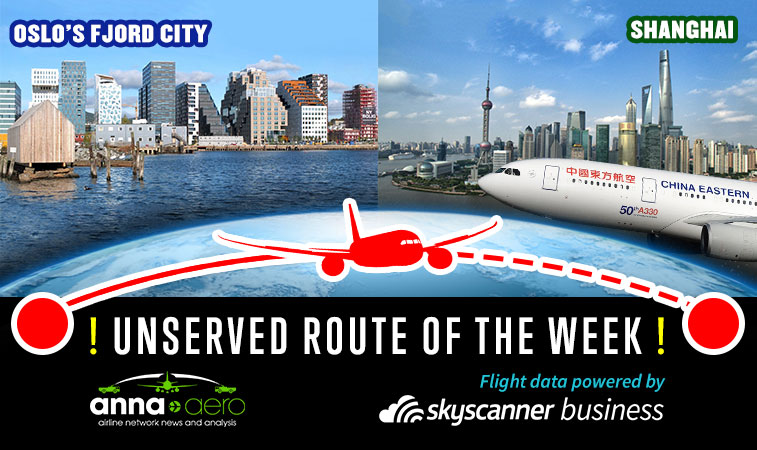 On the waterfronts: Oslo’s brand new Fjord City (Fjordbyen) makes Shanghai Pudong look a bit old. China Eastern already serves nine destinations in Europe; if it flew to Oslo it would face no direct competition and benefit from substantial feed which currently goes to SAS in Copenhagen.

With 80,000 searches last year, a potential new route from Oslo to Shanghai Pudong has been identified as this week’s “Skyscanner for Business-anna.aero Unserved Route of Week” – a powerful analysis based on aspirational data captured from the Skyscanner.net flight comparison site used by +50 million unique visitors per month. “Norway is one of very few countries in Europe with no direct connection to China or Japan – so competition for any operator on the route would be very limited, and there would be excellent feeder opportunities, not only to Chinese destinations, but also cities in Japan and Korea,” says Oslo Airport’s Ulv Elbirk, Director Asia Route Development, who is the latest high-level recruit to the Avinor route development team (he is based in Hong Kong). “The number of Chinese tourists visiting Norway is constantly increasing [room nights up +29% January-May 2016] as they flock to see the beautiful Norwegian Fjords, the spectacular northern lights and our vibrant, cool capital.” 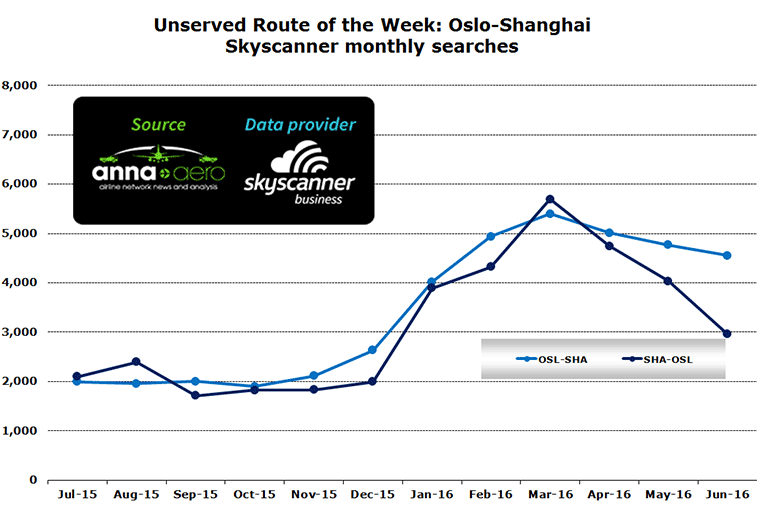 anna.aero recommends this route to China Eastern and Air China

With the traffic on this route indicating virtually a 50/50 split, but slightly in favour of Oslo, the potential carriers at the Norwegian end of the route were considered first. Home-grown long- and short-haul LCC Norwegian is currently the largest carrier (43% share) at Oslo in terms of weekly capacity, according to OAG schedules data for the week commencing 11 August. While the carrier does fly limited Asian services from Oslo to Bangkok Suvarnabhumi (it also flies the same frequency to the Thai city from Copenhagen and Stockholm Arlanda) – it does not currently operate to any destination in China from Oslo, or indeed from any of its bases.

By contrast, Oslo’s second largest carrier based on weekly seats, SAS (38% share), already operates in the Chinese market, with daily flights to Beijing and Pudong from its Copenhagen hub, as well as five times weekly to Hong Kong from its Stockholm Arlanda base. Given its experience in the market, making the jump onto this potential sector would not seem to be as challenging for SAS as it may be for Norwegian, but its existing operations to China and Hong Kong may actually be a barrier to entry, as it won’t want to dilute traffic on its existing Chinese routes (see transfer data below). That said, the Star Alliance carrier will no doubt like to know that the front cabin on the route is full already, according to Elbirk: “Oslo, and indeed Norway, is a very affluent place and for long-haul destinations the business class uptake is substantial. It is especially good for a long-haul operator to know that the front end can be easily filled with business travelers. This would definitely be the case on a Shanghai flight.”

Considering the Chinese end of the route, China Eastern Airlines is presently the leading player at Pudong with a 28% market share of seats – over three times more than second-placed carrier Juneyao Airlines (8%). China Eastern also has many existing European non-stop services: double-daily flights to Paris CDG; eight times weekly to Moscow Sheremetyevo; daily flights to Rome Fiumicino, Frankfurt, London Heathrow and Madrid; four times weekly services to Amsterdam; and thrice-weekly to Prague and St. Petersburg – but none currently to Scandinavia! With the chance of serving an untapped market with no direct competition, and the benefit of not cannibalising existing traffic flows (as with SAS), a new route to Oslo surely is a golden opportunity for China Eastern.

While China Southern Airlines (fourth spot; 7.8% share) is well represented at Pudong, it does not have any European services from the airport. Although smaller, Air China (sixth spot; 6.9% share), does fly some very significant services to Europe from Shanghai ‒ daily to Frankfurt and Milan Malpensa; five times weekly to Paris CDG; and thrice-weekly to Munich ‒ so it could also be a surprise operator of this vacant route.

When looking at the previous year of search data, the busiest month for potential traffic flows (for both directions on the route combined) is March 2016, with over 11,000, over 7,000 higher than the lowest monthly figure, which was recorded in September 2015 (3,700). The seasonality profile of this search data is slightly less extreme than last week’s Unserved Route of the Week (Vancouver to Boston), with the low-month traffic representing 33% of the highest month. According to OAG Traffic Analyser, because there is no direct service, the top three connecting options chosen by those passengers who did book travel between Oslo and Shanghai in the past year indicates that the majority of connecting passengers use Copenhagen (31%), Helsinki (22%) and Amsterdam (14%). In all, 27 different transfer airports were used by travellers to connect between the two cities.

An O&D that is not served by a non-stop flight will typically display a low purchase rate and low traffic. In this instance Skyscanner’s Travel Insight indicates a monthly average of 4.5% for the Oslo to Shanghai route (see graph below). Therefore, if there was an Oslo to Shanghai route, and if bookings performed in line with the “Skyscanner market average” for direct services at both airports (4.6%), the airline operating this route could immediately expect an improved purchase rate of 3%, without any increased marketing spend. However, with nearly 80,000 annual searches, the potential city pair should already be very sustainable. 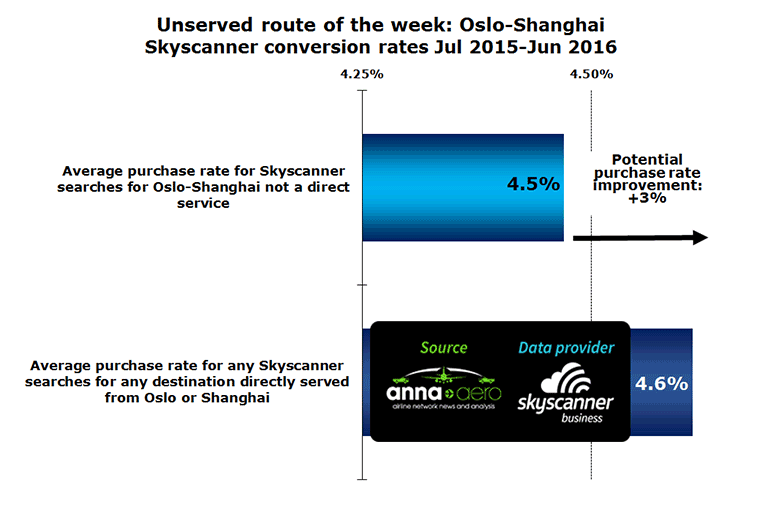 As well as robust passenger demand, there is a significant cargo opportunity for any would-be airline partner. “Norway one of the largest global exporters of salmon and for a Chinese carrier flying to Shanghai there would be the certainty of filling the belly cargo hold on every flight throughout the year as there is no seasonality for salmon exports,” says Elbirk. He adds: “For a carrier flying Oslo-Shanghai it would be easy to distribute this cargo to China, Japan, Korea, Taiwan, etc., and would make a sizeable contribution to the overall route profitability.” 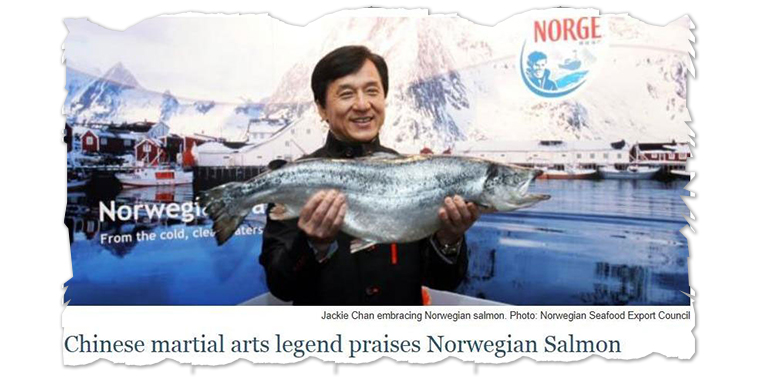 “Norway one of the largest global exporters of salmon and for a Chinese carrier flying to Shanghai there would be the certainty of filling the belly cargo hold on every flight throughout the year as there is no seasonality for salmon exports,” says Oslo Airport’s Hong Kong-based Ulv Elbirk, Director Asia Route Development.