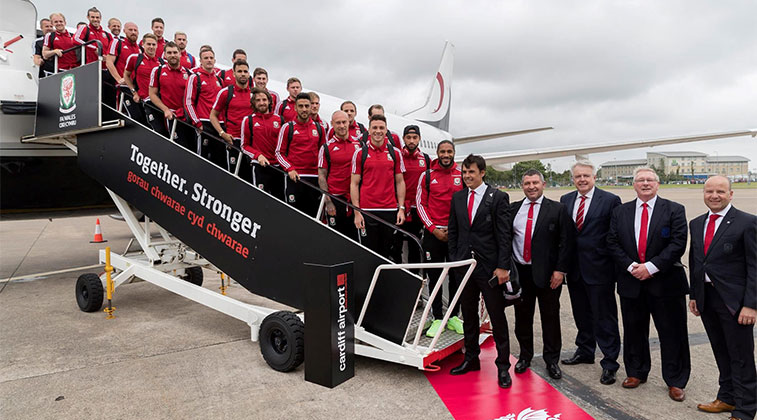 The success of the Welsh football team at the EURO 2016 championships in France earlier this summer resulted in the team being greeted with a hero’s welcome when they flew into Cardiff Airport in early July. They were beaten 2-0 in the semi-finals by eventual winners Portugal.

The recent success of the Welsh football team at the EURO 2016 championships in France (they made it to the semi-finals before losing to eventual winners Portugal) helped draw a lot of attention to Wales. For anyone outside of the UK wanting to visit Wales the most convenient way to enter the country is through Cardiff Airport. Passenger numbers at the airport serving the Welsh capital peaked in 2007 at just over two million, but five years later passenger numbers were just under half that at 1.02 million. The following two years saw little improvement although the airport was sold by TBI back to local authorities. However, in June 2015 Flybe established an operating base at the airport and launched (or in some cases relaunched) eight routes to complement its existing Belfast City and Jersey services. 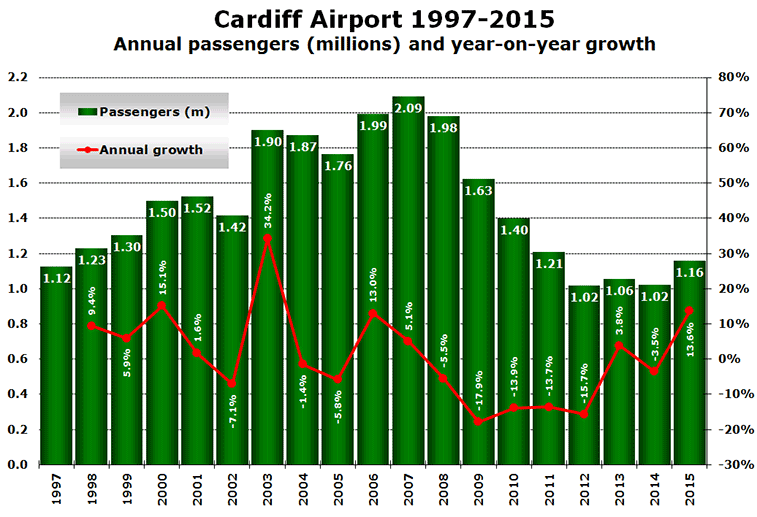 Back in 2007 when the airport was at its busiest the leading airline was bmibaby, which operated scheduled flights to 13 destinations. However, from 2009 onwards the LCC’s operations at the airport started to be cut back and ended completely at the end of the S11 season, a year before the airline ceased all operations. The following table shows the top five airlines and their share of annual scheduled seat capacity at Cardiff at various points during the last decade.

Notably, easyJet has never served Cardiff, preferring to focus its attention in the south-west of the UK on its successful base at Bristol, which it inherited when it bought Go in 2002. Similarly, Ryanair has also focussed on its Bristol base but does operate a single route from Cardiff (Tenerife South) and used to operate flights from its home base in Dublin, but this route was suspended at the end of May 2006.

Out of Europe’s five pan-European LCCs the one with the biggest presence in Cardiff is Vueling. The Spanish carrier began seasonal flights from Barcelona in March 2012, followed by Alicante and Palma de Mallorca in June 2012 and Malaga in March 2013. The airline is now the third biggest in Cardiff with almost 12% of scheduled seat capacity in 2016 and now serves all four routes with four weekly flights during the peak summer period.

Growth for the last 14 months

Since Flybe opened its base in June 2015 Cardiff has reported year-on-year passenger growth every month. For the last 12 months passenger numbers have reached just over 1.3 million, an increase of 29.3% over the 12 prior months. In terms of seasonality Cardiff scored 20.37 in 2014 and 23.74 in 2015 on anna.aero’s SVID (Seasonal Variation in Demand) calculator. Scores of over 20 come into the category of “Managerial and Operational challenges”. For comparison, Bristol in 2015 scored a “good” 8.4. 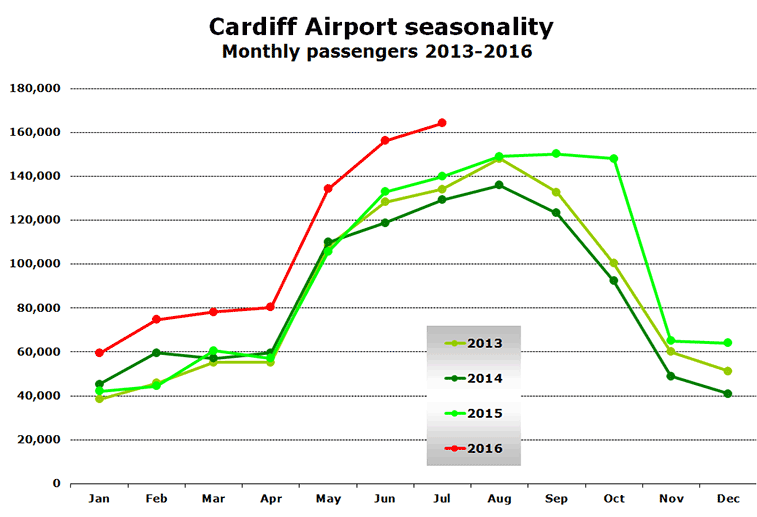 Amsterdam and Dublin lead the way

According to UK CAA data the busiest routes from Cardiff in 2015 were Amsterdam and Dublin, with Palma de Mallorca and Alicante in a virtual tie for third place. Of the top 15 destinations last year, eight were in Spain (shown in bright green). Other popular leisure destinations include Dalaman (Turkey), Faro (Portugal) and Zakinthos (Greece). Edinburgh is the only UK domestic destination in the top 15 while for passengers wanting to get to global destinations KLM’s Amsterdam service appears to be the leading choice, though for transatlantic services Dublin is an increasingly popular option. Given some of the airports it serves across Europe it may be surprising that Turkish Airlines has not yet started a service to Cardiff from its Istanbul hub. 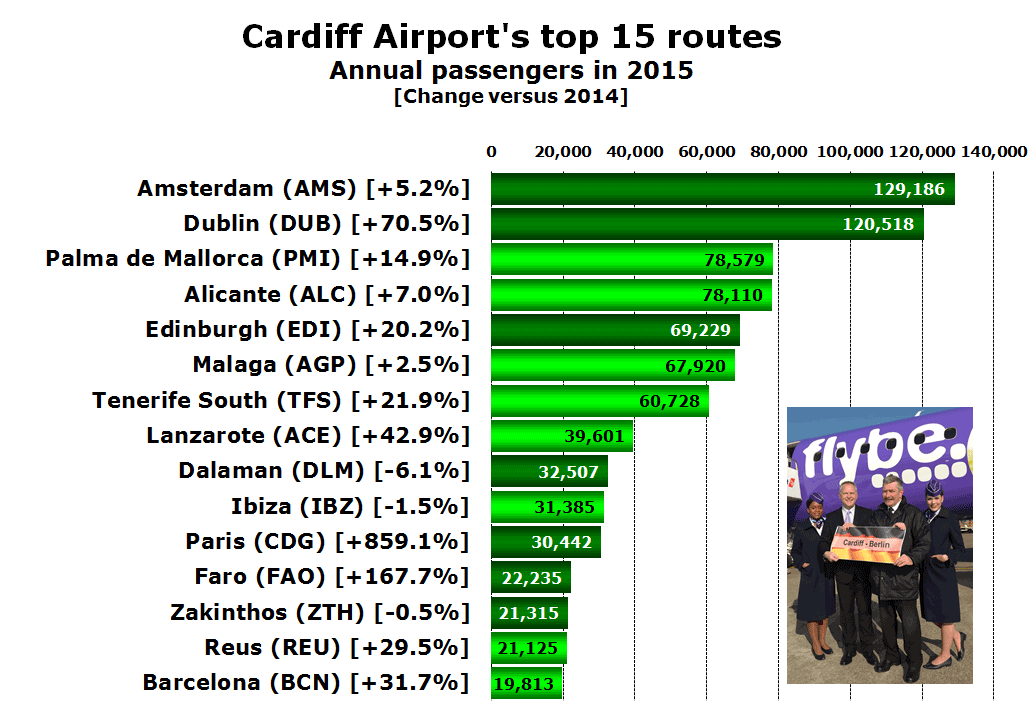 New services already announced include Flybe to Berlin Tegel (a weekly service starting on 1 October increasing to twice-weekly) and Thomson Airway operating two flights to Dubai Al Maktoum (on 23 January 2017 and 20 February 2017). However, according to OAG data (and the airline’s on-line booking tool) Flybe’s service to Düsseldorf is not currently being operated after 29 October. 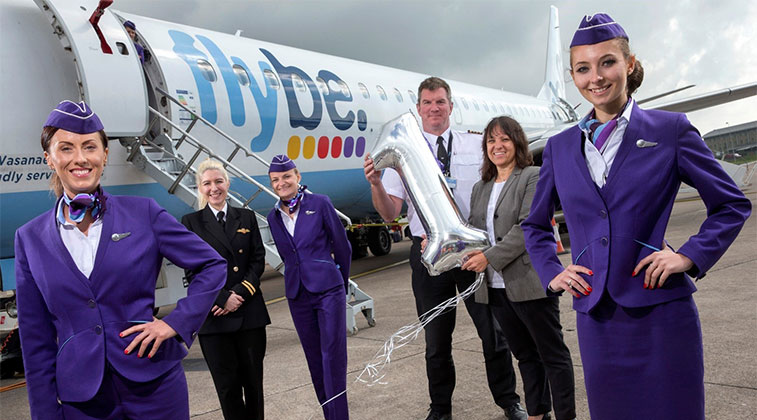 On 1 June 2016 Flybe celebrated their first anniversary since they launched based operations at the airport. The regional carrier now serves 15 destinations from the airport. This summer saw the airline operate 12 routes with Verona being the most recent addition on 23 April. It also operates seasonal winter flights to Chambery and Geneva (for ski enthusiasts) while a weekly Berlin Tegel service is set to launch on 1 October.