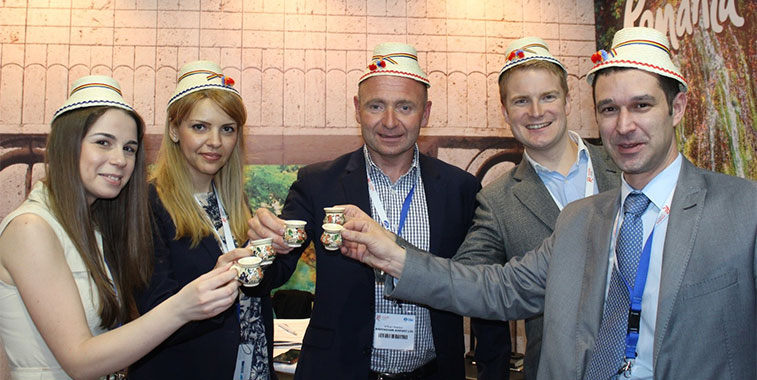 At Routes Asia in Manila in March celebrations were had for the new connection between Bucharest and Birmingham. Denisa Fulger, Route Development Specialist, Bucharest Airport; Alexandra Nicolae, Deputy Head of Route Development, Bucharest Airport; William Pearson, Aviation Development Director, Birmingham Airport; Tom Screen, Head of Aviation Development, Birmingham Airport; and Razvan Boldor, Commercial Director, Bucharest Airport, celebrated with a toast of Romanian Bran the new connection between the UK city and Wizz Air’s third largest airport, a route which Wizz Air launched in May this year. In total Wizz Air has opened up seven routes from Bucharest during the past year, with LCC rival Blue Air launching competing services on five of the seven city pairs within the same 12 months.

Wizz Air first commenced operations from Bucharest’s Henri Coandă Airport (OTP) on 1 June 2012, with its first flights from the airport that day being to London Luton and Milan/Bergamo. Before it operated from Bucharest’s main airport Wizz Air flew to the Romanian capital’s Aurel Vlaicu Airport (BBU), a facility nine kilometres south of Henri Coandă.

This summer Bucharest is Wizz Air’s third largest airport (based on seat capacity), and second largest base after Budapest. The carrier’s number one airport is still London Luton, although this is not a base for the airline. Luton has nearly 11% of the carrier’s monthly departing seats this summer, with Budapest occupying 7.8% and Bucharest 5.8%. Warsaw Chopin in fourth place currently has 4.4% of monthly seats. In relation to Bucharest at present, Wizz Air is the airport’s largest carrier, with the ULCC having 23% of monthly departing seats. The airline is just ahead of TAROM which has 21% while third placed airline Blue Air has 15% of seats.

Wizz Air launched its first flights from Romania on 15 January 2007, 15 days after the country, along with Bulgaria, joined the EU. The ULCC’s first routes from the capital were: Barcelona, Budapest, Dortmund, London Luton and Rome Ciampino. By W07/08 the carrier had also added flights to Liverpool and Valencia. By S08 the carrier had ended services to Liverpool from Bucharest. However, operations to Brussels Charleroi, Cluj-Napoca, Milan/Bergamo and Venice Treviso had been added. By the time the carrier had reached S11, its last summer at Aurel Vlaicu before moving to Henri Coandă, it was operating 20 routes.

Since that last summer of operation at Aurel Vlaicu Wizz Air has doubled its route count from the Romanian capital. It has grown from 20 to 41 routes, while weekly flights have risen from 102 to 162. However, despite this growth, it has resulted in the average weekly frequency of Wizz Air’s Bucharest routes going from 5.1 in S11 to 3.9 this summer. 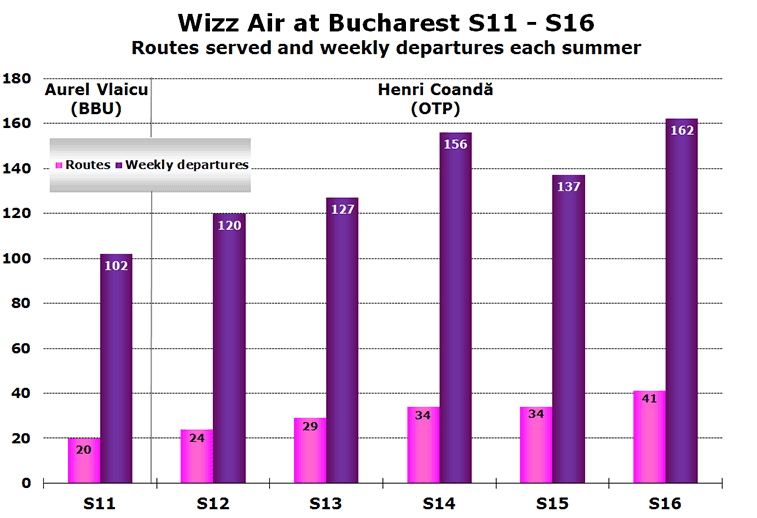 In S12, when the carrier moved to Henri Coandă, the only route which was not transferred was Venice Marco Polo, with the carrier moving its Italian operations in the city to Venice Treviso instead.

This summer the carrier is operating seven more routes and 25 additional weekly flights when compared to S15. In the past year the airline has added Birmingham, Cluj-Napoca (operated in S08), Glasgow, Lisbon, London Gatwick, Pescara and Stockholm Skavsta to its second largest base. Of these routes, Blue Air, the third largest carrier from Bucharest, has also opened services to five of these seven destinations, namely Birmingham, Cluj-Napoca, Glasgow, Lisbon and Stockholm (Arlanda). Blue Air operates 34 routes from Bucharest this summer. Of these routes 17 compete directly with Wizz Air, nearly half the number of the latter carrier’s total route count from Bucharest. As well as the four direct competed routes mentioned, the following are operated by both carriers: Barcelona, Bologna, Catania, Larnaca, London Luton, Madrid, Malaga, Milan/Bergamo, Naples, Paris Beauvais, Tel Aviv, Turin and Valencia. Blue Air also competes indirectly with Wizz Air to Brussels (Zaventem), Milan (Linate) and Rome (Fiumicino).

Six routes dropped since being at Henri Coandă

Looking at the airline’s history since it moved operations to Henri Coandă, anna.aero has identified six routes that the carrier has started or inherited from its Aurel Vlaicu operations, but are no longer operating. Of these, two (Budapest and Memmingen [S12]) operated for just one season. Cuneo and Forli in Italy, routes which were operated by the carrier at Aurel Vlaicu, were last operated in S14 and S12 respectively. Since moving to Henri Coandă, the airline has also opened routes to Palma de Mallorca (S12) and Girona (S13), with both of them last operating in S14.

Looking ahead to the upcoming winter season, Wizz Air will open routes to four destinations, namely Budapest (launching 19 September), Tenerife South (2 November), Hannover (13 December) and Billund (16 December). The most significant of these launches is Budapest, as this will be the second route that links Bucharest to another Wizz Air base. Currently Wizz Air has 23 bases in Europe with Cluj-Napoca being the only other base Bucharest is connected to, with that having launched just a few weeks ago. The capital connection between Bucharest and Budapest was last operated by the ULCC in 2012, ending a near four-year hiatus on the route. This will be the carrier’s third attempt at operating the Budapest route, as it was also operated by the carrier from its former Bucharest airport when it first launched from Romania in 2007. 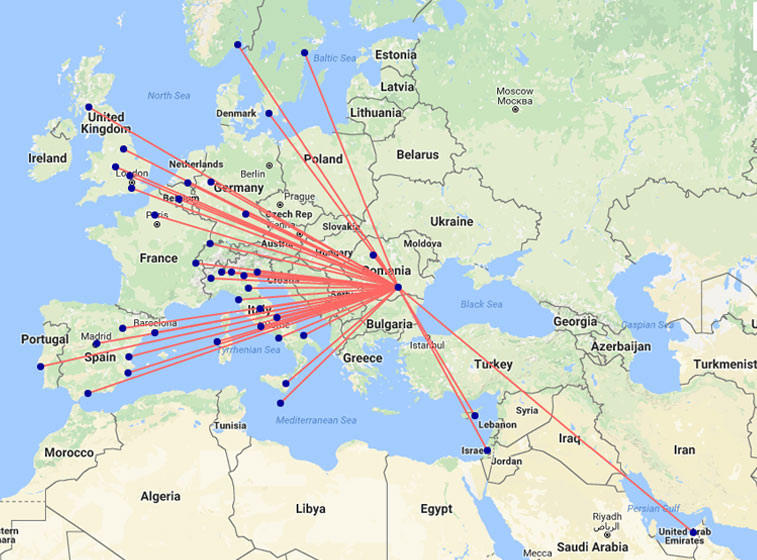 Wizz Air’s Bucharest route map for August 2016. During the past year the airline has opened routes to seven destinations, with the carrier now serving a total of 41 routes from Bucharest in S16, up from the 20 it operated in S11.