Big in Japan, and getting bigger. In July of this year Hong Kong Airlines launched new routes to Tokyo Narita and Osaka Kansai. This followed the introduction of flights to Okayama at the end of March. Hong Kong Airlines is the third biggest carrier in Hong Kong and the fastest growing among the airport’s top 12 airlines.

As Hong Kong Airlines approaches its tenth anniversary later this year, the airline’s fleet has now reached 27 passenger aircraft (it also has five freighters). These comprise 11 A320s, nine A330-200s and seven A330-300s. According to Airbus data the airline still has two A320ceos to be delivered and an order for 15 A350-900s, the first of which is expected to be delivered in the second quarter of 2017. 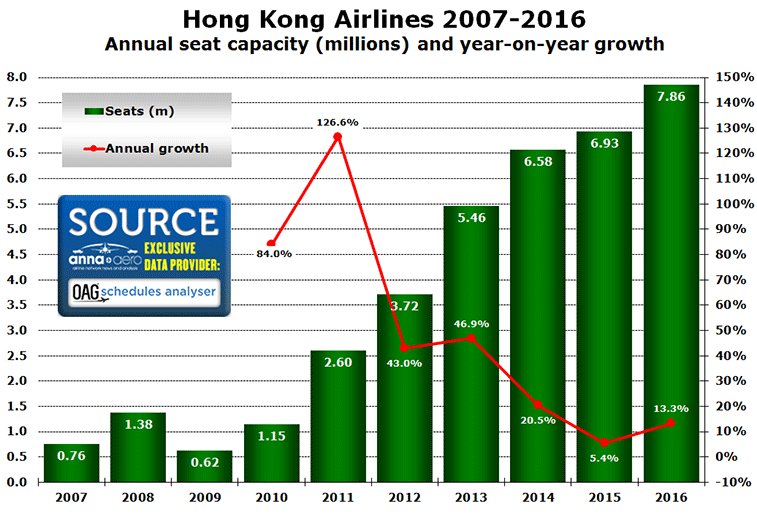 Since 2010, the airline’s annual seat capacity has grown almost sevenfold. Hong Kong Airlines is a full service airline and the average age of its fleet is an impressively low 3.9 years. A major shareholder in the carrier is Hainan Airlines. According to the airline it carried three million passengers in the first half of 2016 (an increase of 12%) and load factor was up 1.3 percentage points to 83%.

Hong Kong Airlines now ranks a clear third at Hong Kong, behind Cathay Pacific Airways and Dragonair, but well ahead of China Airlines and HK Express. Comparing schedule data for the first of week August in 2015 and 2016 reveals that Hong Kong Airlines is the fastest-growing airline among the top 12. In terms of weekly seat capacity it accounts for 9.6% of Hong Kong’s total, while its flights make up 10% of the airport’s movements. 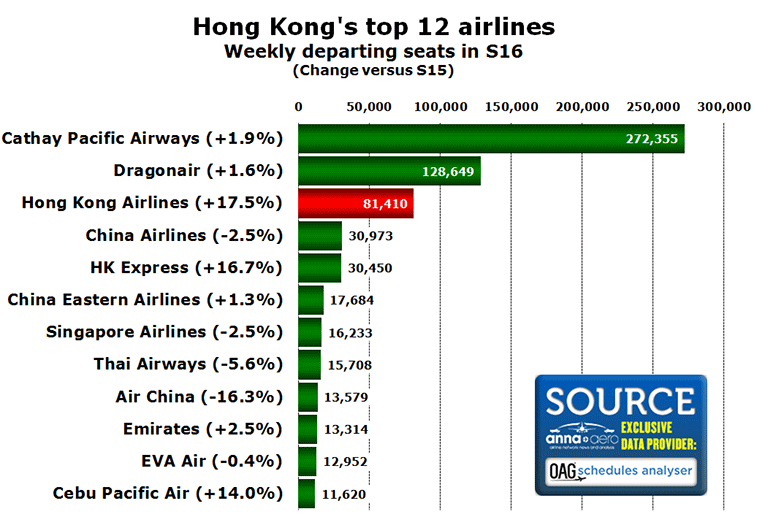 Bangkok is biggest route by ASKs

Measured by ASKs (Available Seat Kilometres), which takes into account frequency, aircraft size and sector length, Hong Kong Airlines’ biggest route is to Bangkok Suvarnabhumi. Eight of the remaining 11 routes in the airline’s top 12 are to destinations in China (shown in red) or Japan (shown in bright green). The other relative oddities are Denpasar in Indonesia, Taipei Taoyuan in Taiwan and Gold Coast in Australia. The latter route actually operates as Hong Kong-Gold Coast-Cairns-Hong Kong, enabling the airline to serve two destinations in Australia. 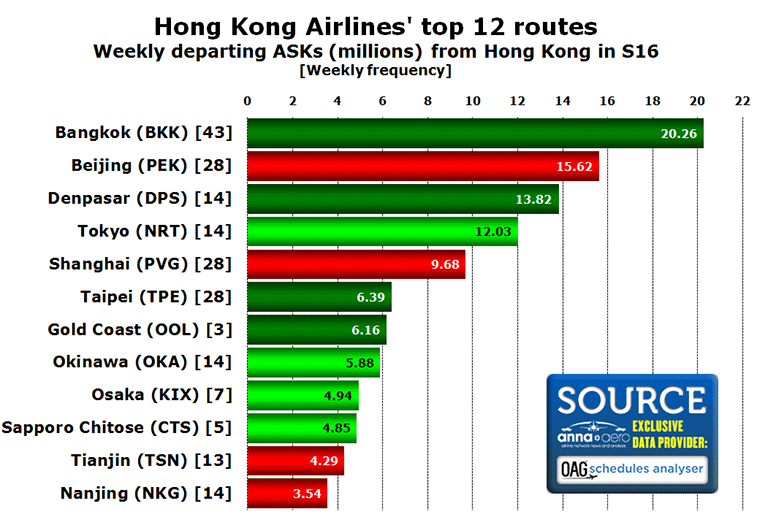 In total Hong Kong Airlines now serves 32 destinations non-stop from Hong Kong of which 16 are in China and seven are in Japan. The Chinese routes account for 53% of the airline’s flights and 48% of its weekly seat capacity. Not all routes worked for the airline. In the last 12 months the airline has suspended operations to Hohhot, Taiyuan and Yancheng. According to OAG data the first two were last flown in mid-July, while the Yancheng route was last operated at the end of March. 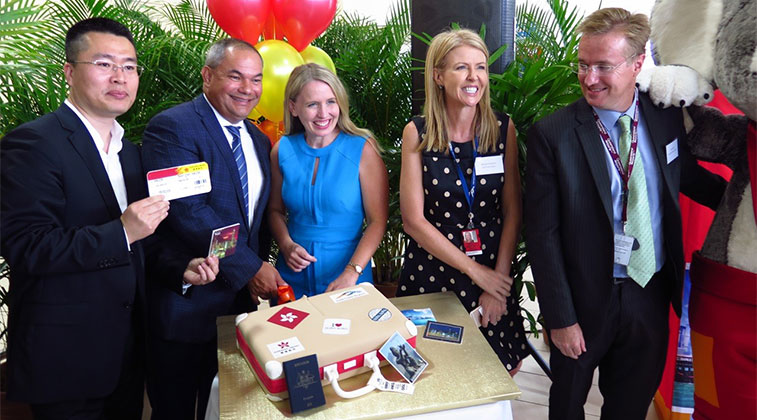 Back in January Hong Kong Airlines began serving both Gold Coast and Cairns in Australia. Although currently the airline’s longest route, this will easily be beaten when the carrier starts serving Auckland in New Zealand from 10 November.