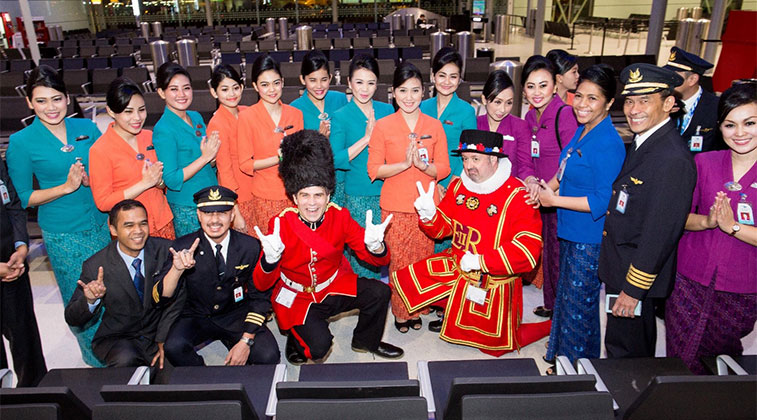 On 31 March, Garuda Indonesia switched its London service from Gatwick to Heathrow, with the return flight operating non-stop from the UK capital. It previously flew via Amsterdam when operated from the former London airport. Heathrow is one of five new non-stop destinations to be added to Jakarta’s route map this year according to OAG schedules, with Sorong, Siborong-Borong, Sampit and Nanning being the other four.

Jakarta is the largest city and the capital of Indonesia. With a population of just over 10 million (based on 2014 data), it is the 14th largest city in the world. It sits just behind Shenzhen but ahead of Lahore in relation to population size. The official metropolitan area, known as Jabodetabek (a name formed by combining the initial syllables of Jakarta, Bogor, Depok, Tangerang and Bekasi), is the second largest in the world, yet the metropolis’ suburbs still continue beyond its borders. Its unofficial built-up metropolitan area is home to around 30.2 million inhabitants (based on 2010 census data). Jakarta is now considered a global city and Indonesia one of the fastest growing economies in the world. Interestingly, Jakarta reported the highest return on investment for luxury real estate in 2014 compared to any other city on earth. By 2020, the population of Jabodetabek is expected to grow to 35 million, with Jakarta city itself expected to reach 16 million.

In 2015 Soekarno–Hatta welcomed over 52.3 million passengers, with 40.1 million (77%) being domestic traffic and the remaining 12.2 million (23%) international. The year before, the airport welcomed nearly 57 million passengers, meaning traffic in the 12-month period between 2015 and 2014 dropped by 4.6 million, which is just over 8.8%. In relation to market split, domestic traffic dropped by 9.6%, while international fell 2.6%. It is important to note that Jakarta is no longer served by just Soekarno–Hatta, as another airport known as Halim Perdanakusuma (IATA code: HLP), which was the city’s main international airport until 1985, when it was replaced by Soekarno-Hatta, had some of its operational restrictions removed in January 2014, allowing it help reduce congestion at the airport which partially replaced it. The secondary airport welcomed 1.57 million passengers in its first year of operation, and its opening may well have had an impact on the growth of its crosstown bigger neighbour. 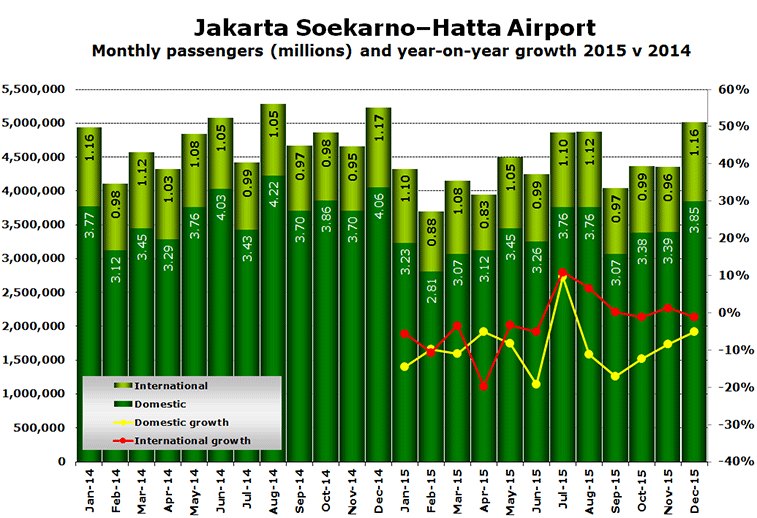 The Directorate General of Civil Aviation Ministry of Transportation Republic of Indonesia 2016.

The average decline in traffic month-on-month last year was 8.0%, with June being the worst performer. Traffic fell by over 16% in June when compared to the same month of 2014. Surprisingly in 2015 one month did provide growth, as traffic in July was up 9.9%, with international traffic up 11% and domestic 9.6%. Despite the remaining months of 2015 showing drops, international traffic was also up in August (6.7%) and September (0.2%).

Putting Soekarno–Hatta’s monthly passenger figures for 2015 into anna.aero’s Seasonal Variation in Demand (SVID) calculator, the airport performs well, with it garnering a score of 0.90 – a “Excellent” rating. However, with the drop in traffic at the airport, this result has slightly worsened since 2014 where it registered a SVID score of 0.63. The reason for Soekarno–Hatta’s seasonality getting worse is due to the irregular changes in monthly net passengers last year. For instance in July 2015 traffic increased by 44,000 passengers, whereas in June it dropped by 827,000. So far no data for 2016 has been released, therefore anna.aero is unable to analyse the traffic trends between S16 and S15.

During the past 12 months, Soekarno–Hatta has lost the following carrier’s from its line-up: Air France (Paris CDG via Singapore); Lufthansa (Frankfurt via Kuala Lumpur); Yemenia Yemen Airways (Sana’a via Kuala Lumpur and Dubai); Kuwait Airways (Kuwait City via Kuala Lumpur); Aviastar (Ketapang); and EGYPTAIR (Cairo via Bangkok Suvarnabhumi). Overall monthly seat capacity to Indonesia’s largest airport is down 6.6% when compared to S15, with the ending of these five carriers services contributing to the decline. 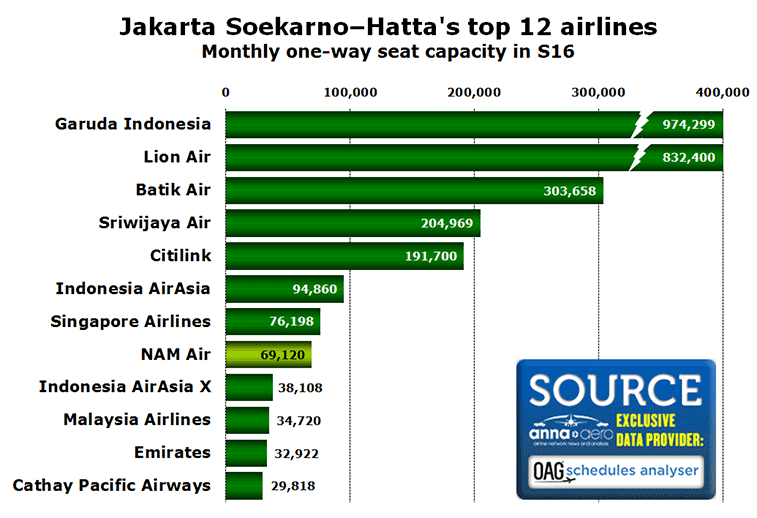 Despite the airport losing six airlines, it has only seen a net loss of one, with five new entrants joining the airport’s airline roll call. NAM Air (highlighted in light green), Thai Lion Air, Xpress Air, Royal Jordanian and Lucky Air (launching 25 August) have all started service to Soekarno–Hatta during the past 12 months, with NAM Air, daughter company of Sriwijaya Air, being the largest of the new entrants. In relation to existing carriers, Garuda Indonesia is the largest airline, occupying 30% of monthly departing seats, followed by Lion Air (26%) and Batik Air (9.4%).

Only three of the top 12 routes report growth

Looking at Soekarno–Hatta’s top 12 routes, only three have reported growth during the past 12 months (highlighted in light green). Singapore (up 2.4%), Padang (1.6%) and Pontianak (4.9%) have witnessed gains in seats. Of the remaining nine routes in the top 12, the average year-on-year decline in seats is just under 11%. 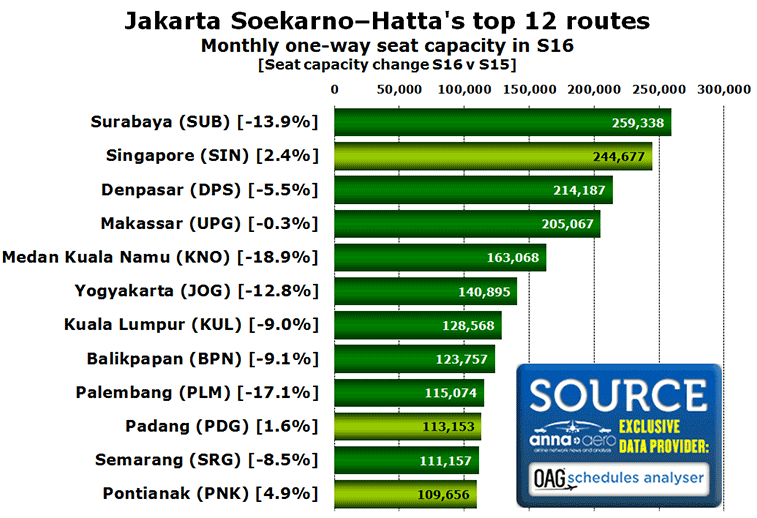 Looking at OAG Schedules Analyser data, during the 12-month period between August 2015 and August 2016, Soekarno–Hatta has welcomed four new non-stop destinations to its departure board, namely: Sorong (NAM Air and Xpress Air); Siborong-Borong (Garuda Indonesia and Batik Air); Sampit (Kalstar Aviation); and Nanning (Lucky Air – launching 25 August). On 31 March this year the airport also became connected to London Heathrow, with Garuda Indonesia switching its operations to the London airport from Gatwick. Originally the route to London operated via Amsterdam. While Heathrow is served outbound via Singapore, the return, unlike its previously operated Gatwick services, flies non-stop. During the past 12 months, Jakarta has seen two non-stop destinations being dropped from its route map, with Phuket (Indonesia AirAsia) and Ketapang (Aviastar) no longer being served, along with many one-stop routes also being cut as revealed above. 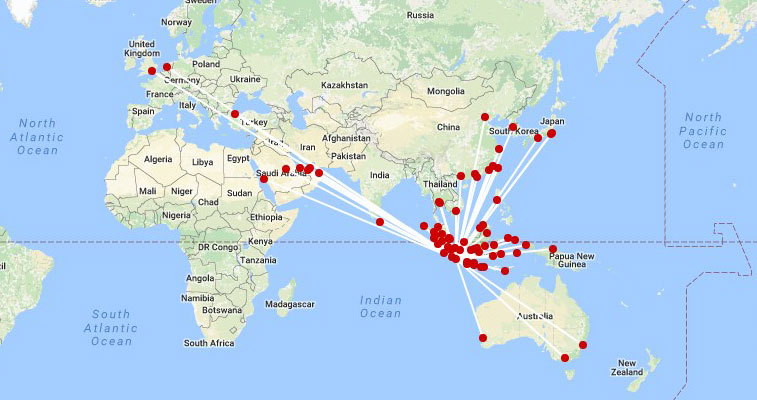 Despite international traffic dropping by 2.6% during the past 12 months no country markets have been cut from Jakarta within the same period. Of the 21 nations connected to Soekarno–Hatta non-stop, the three which have taken the greatest capacity cuts over the past year are Qatar (11th largest market; -18%), Saudi Arabia (eighth; -15%) and UAE (sixth; -11%). The only other nation within the Middle East region which is served non-stop is Oman (Muscat) which has seen a 3.5% rise in seat capacity. Overall capacity to the Middle East in S16 is down 13% when compared to S15, which is equivalent to 18,000 monthly seats. It comes as no surprise to see that Malaysia (third largest country market) has seen a significant cut in seats (-9.1%), as many routes which operated via Kuala Lumpur have been dropped during the past 12 months.

In relation to the remaining country markets served non-stop from Soekarno–Hatta, it is the domestic market which maintains the majority of capacity, with it occupying 76% of monthly seats this summer, down from 77% last year. In relation to net seats lost, Indonesia has witnessed around 218,000 monthly seats being cut from the S16 schedule. China (ninth largest market) and Sri Lanka (17th) have reported the best growth since S15, with the former up 32% and the latter 22%.

Soekarno–Hatta’s Terminal 3, which was built at a cost of $560 million opened in the first week of August. The new terminal, which according to the airport will be solely used by Garuda Indonesia, a carrier which occupies 30% of monthly seat capacity in S16, will have a capacity for 25 million passengers. This means that Soekarno–Hatta is now able to accommodate 70 million passengers per annum. 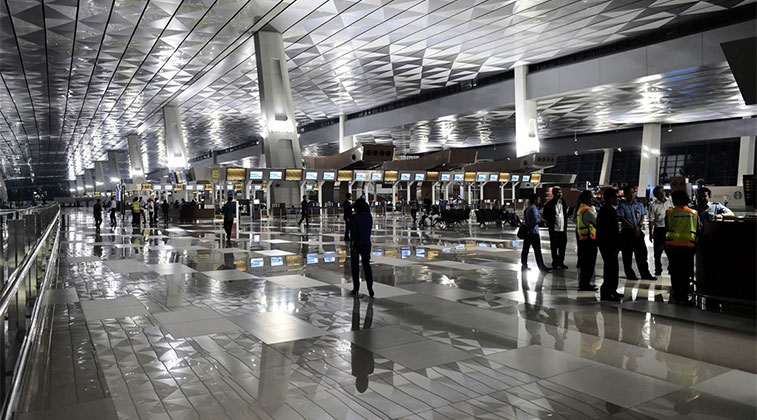 The check-in zone of Soekarno–Hatta’s new Terminal 3. Built at a cost of $560 million, the facility has increased the airport’s overall annual capacity to 70 million passengers.