Colombian traffic up 7.4% for first half of 2016; grows 63% since the turn of the decade; Bogota – Medellin #1 route despite passenger drop 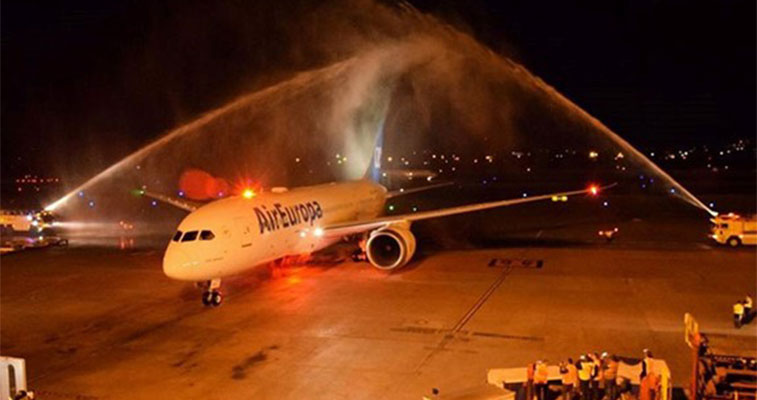 The latest carrier to commence service to Colombia was Air Europa with its daily 787-8 service between Madrid and Bogota on 28 June. From June data published by Aeronáutica Civil de Colombia, the carrier flew 1,400 two-way passengers on the city pair during its first three days of operation, representing an average load factor of just under 95%.

Colombia, at the northern tip of South America, is a country of lush rainforests, towering mountains and coffee plantations. According to International Monetary Fund estimates, Colombia’s GDP (PPP – purchasing power parity) is expected to be US$667 billion in 2016, making it the 31st largest economy in the world and third biggest in South America behind Brazil (seventh) and Argentina (26th). As of July this year, Colombia has an estimated population of just under 48.7 million people, which is 11.4 million more than the sum of passengers flying from the nation’s airports last year.

Based on OAG Schedules Analyser data, Colombia has 51 commercial airports in operation this summer, with Bogota, Medellin, Cali, Cartagena and Barranquilla being the five largest. Bogota is home to just under 48% of the nation’s monthly seat capacity in S16, with second place Medellin accountable for 12%. These are the only two airports which achieved a double-digit share of all seats from Colombia this summer.

During 2010, Colombian airports welcomed 22.9 million passengers. Last year the country welcomed 37.3 million, representing an increase of 63% when compared to the start of the decade. Splitting the traffic between domestic and international, the former category has witnessed passenger numbers rise by 59%, while the latter has welcomed a 74% growth in traffic. 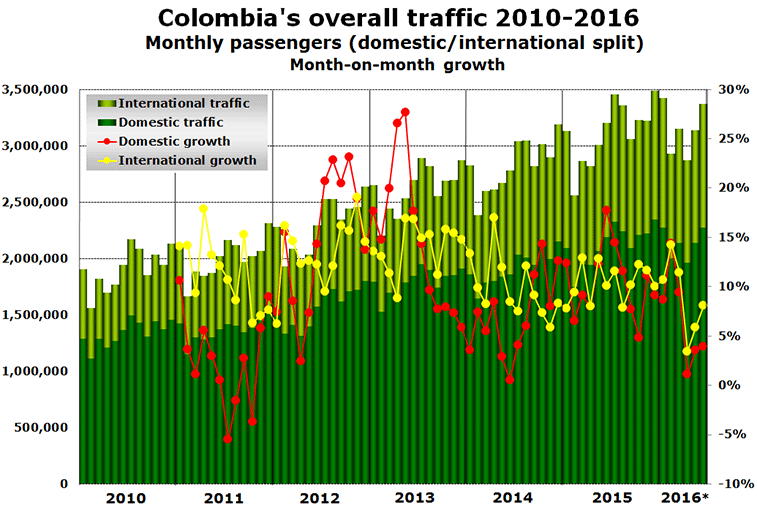 For the first half of 2016, Colombia has welcomed 18.8 million passengers, a rise of 7.4% when compared to the same six months of 2015. This 2016 figure is also 82% of the overall figure of traffic that passed through the nation in 2010, highlighting the significant growth being seen in Colombia in recent times. During January and June this year, domestic passengers have risen 6.7%, with international traffic up 8.9%.

The link between Colombia’s two largest airports, Bogota and Medellin, is the country’s number one route. The short 217-kilometre sector is served by three carriers in S16, namely Avianca (194 weekly flights), LATAM Airlines Colombia (57) and VivaColombia (38). Last year the route was also served by Copa Airlines (seven weekly flights), however it ceased operations on the route on 31 May this year according to OAG schedules. Looking further into the passenger traffic between the two airports for last year, Avianca carried just under 64% of all passengers, followed by LATAM Colombia (21%), VivaColombia (14%) and Copa Airlines (2%). Of the four carriers, only Avianca witnessed a growth in passenger traffic during the 12-month period analysed, with its traffic on the route growing by 1.9% – a net gain of over 41,000 passengers. LATAM Colombia saw a 2.4% drop in traffic (17,300 passengers), while VivaColombia reported a 6.0% decline (30,300) and Copa a 14% drop (11,600). Overall traffic dropped by 0.5% on the domestic city pair last year. 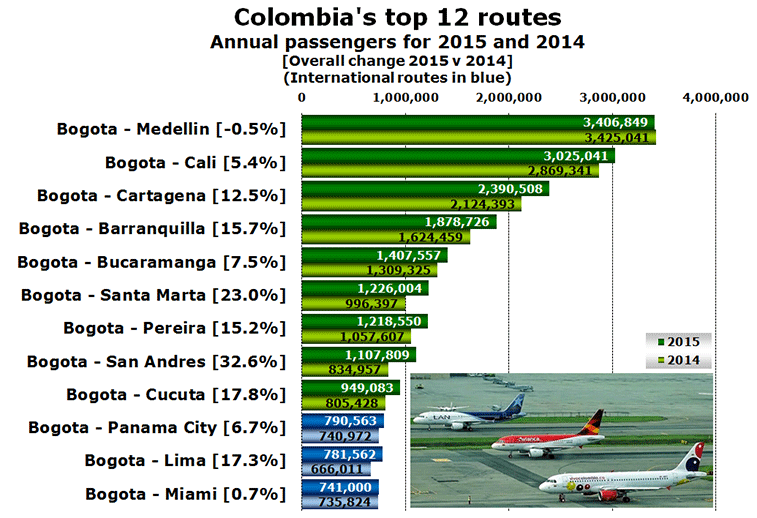 Only three of Colombia’s top 12 routes are international services (highlighted in blue). Of the top 12, the number one link is the only one in the past 12 months to have witnessed a drop in traffic. It is the domestic link between Bogota and San Andres, a Colombian island in the Caribbean, which has delivered the biggest increase in passengers, with traffic on the route up by over 32%. The route is served by Avianca (28 weekly flights), LATAM Colombia (28), VivaColombia (14) and Copa Airlines (three) this summer.

Outside of the top 12 one of the strongest performing routes for growth is the link between Bogota and Cancún (24th largest route). The connection between the Colombian capital and the Mexican resort has experienced a 74% rise in traffic between 2014 and 2015, a net gain of nearly 137,000 passengers. In relation to the nation’s top city pairs, the only other route that has welcomed a six-figure increase in passengers outside of the top 12 was the capital pairing of Bogota and Santiago (18th), with the connection to Chile’s capital welcoming 133,000 more passengers in 2015 than it did in 2014.

Not all routes however have welcomed additional passengers. Traffic between Bogota and Caracas, the capital of Venezuela, dropped by 22% last year, representing a net decrease of 98,200 passengers. Bogota – Panama City (-2.3%; 25th largest route), Bogota – Paris CDG (-2.3%; 28th) and Bogota – Frankfurt (-7.0%; 29th) are some of Colombia’s biggest international routes which recorded lower traffic figures in 2015 in comparison to what they carried the year before.

So far this year, just over 20 million passengers have travelled through Colombia. Of these passengers, six million (30%) have been on international routes, with 14 million (70%) on domestic services. Avianca is the dominant carrier in Colombia, with the Star Alliance member during January and June this year carrying just under 50% of all passengers, followed by LATAM Colombia (12%) and VivaColombia (8.1%). In relation to Avianca, 21% of its passengers flew on international routes (2.1 million) and 79% on domestic (7.8 million). When comparing Avianca’s passenger traffic for the first half of 2016 against the same time period of last year, its traffic has grown by 6.5%, with its domestic traffic up 10%, and international traffic 5.6%. It should be noted these figures do not take into account Avianca Ecuador’s passengers. Avianca Ecuador is Colombia’s largest international carrier, with it carrying 1.7% of passengers so far in 2016. American Airlines (1.3%) and JetBlue Airways (1.1%) are the only other international airlines to carry above 1.0% of all traffic. Four of Colombia’s top 12 airlines (highlighted in light green) are carriers based outside Colombia. Although Copa is from Panama, it does operates a Colombian subsidiary. 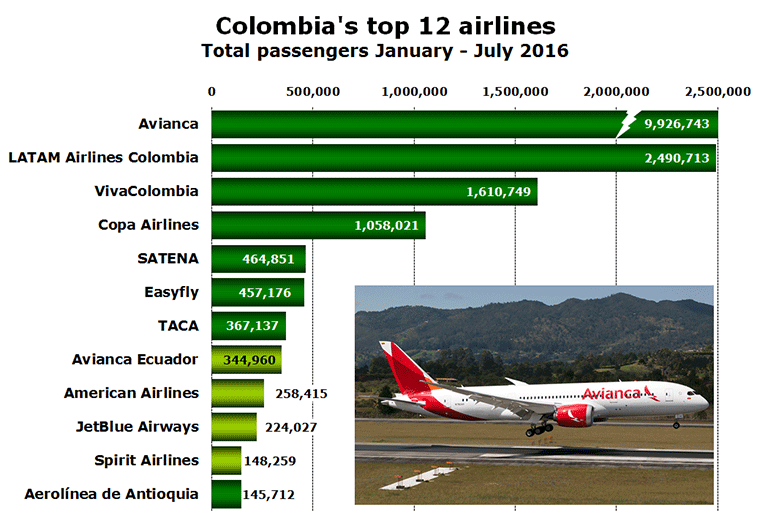 The latest carrier to commence service to Colombia was Air Europa with its daily 787-8 service between Madrid and Bogota on 28 June. From June data, the carrier flew 1,400 two-way passengers on the route during its first three days of operation, giving an average load factor of just under 95%. On 4 May Turkish Airlines also commenced operations to Bogota. During its first two months of operation (May – June), the Star Alliance member carried 4,647 passengers between Istanbul Atatürk and the Colombian capital, representing an average load factor of 76%. However during June the airline carried 2,506 of those passengers, giving an average monthly load factor of 84% for that month. Despite the addition of these two carriers, looking at OAG schedules it seems that one airline has decided to end Colombian operations. TAP Portugal ended its flights between Bogota and Lisbon, a route which operated inbound via Panama City, on 26 March. The route ran for 22 months and carried during that time 82,800 passengers. During its last month of operation, TAP Portugal carried 1,984 passengers on the city pair, representing a load factor of just 37%. Its average monthly load factor in 2015 was 54% while in 2014 it was 64%. 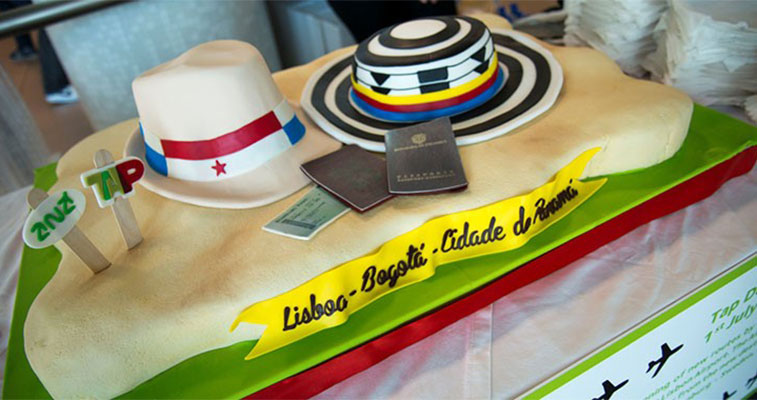 On 1 July 2014 TAP Portugal commenced services between Lisbon and Bogota, a route which operated into the Colombian capital via Panama City. Unfortunately after 22 months of operation, the route closed on 26 March of this year. TAP Portugal is the only airline during the past 12 months to end operations to Colombia according to OAG Schedules Analyser data.