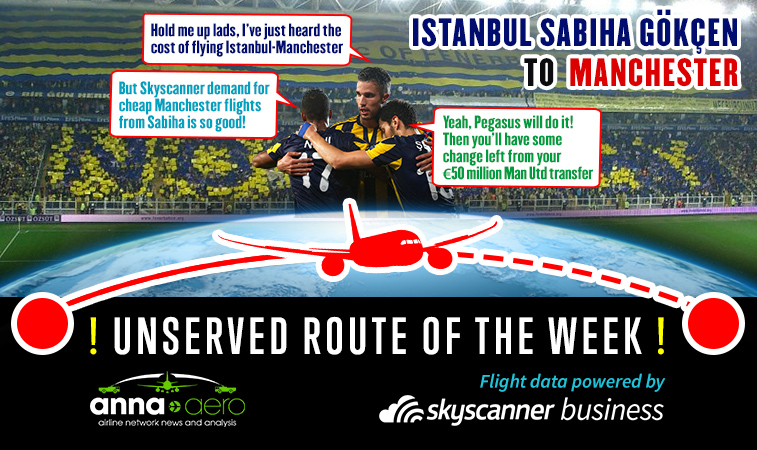 Poor old Robin Van Persie only got €50 million from his Man Utd to Fenerbahçe transfer. But when he wants to fly back to see his pals in Manchester, the closest Istanbul airport to his stadium – Sabiha Gökçen – doesn’t offer a Pegasus Airlines low cost service. That’s despite the fact that, of the 1.3 million annual Skyscanner searches for the Istanbul-Manchester city pair, around 10% (about 130,000) specifically search for a “Sabiha Gökçen” departure. This route has so got to be worth a shot!!!

With 440,000 searches last year, our biggest unserved route to date (we have completed 28 other airport pairs since we launched this feature) a potential new route from Istanbul Sabiha Gökçen to Manchester has been identified as this week’s “Skyscanner for Business-anna.aero Unserved Route of Week” – a powerful new kind of analysis based on aspirational data captured from the Skyscanner.net flight comparison site used by +50 million unique visitors per month. This week’s analysis is slightly different, as the city pair is already well served – Turkish Airlines already flies thrice-daily between its Istanbul Atatürk hub and Manchester ‒ but the specific airport pair is unserved. So as to not send you to sleep, the methodology used by our data elves on how we calculated the 440,000 potential market figure can be found below. 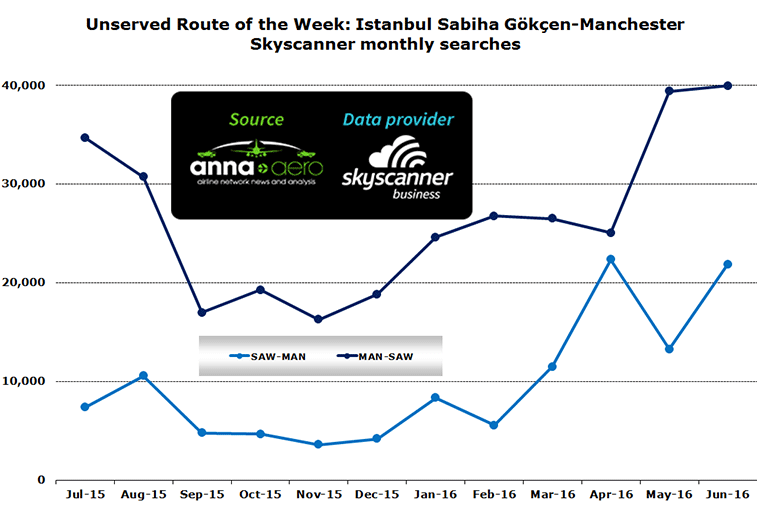 anna.aero is surprised! Why doesn’t Pegasus Airlines fly it??

With the traffic on this route indicating a 73/27 split in favour of the UK destination, the potential carriers at the Manchester end of the route were considered first. Ryanair is currently the largest airline (14% share) at Manchester in terms of weekly capacity, according to OAG schedules data for the week commencing 23 August. However, the carrier does not fly any services to Turkey from its 10th largest base, or indeed from any of its 77 bases. Looking through the list of potential carriers at the UK end of the route there appears to be a dearth of options – while the #2 largest carrier (11%) Thomson Airways does fly to Turkey from Manchester (Dalaman ‒ four times weekly; Antalya – three; Bodrum – two; Izmir ‒ one), as does #3 (11%) Jet2.com (Dalaman ‒ four times weekly; Antalya – two; Bodrum – two), and #5 (9%) Thomas Cook Airlines (Dalaman ‒ seven times weekly; Antalya – five; Bodrum – two; Izmir ‒ two), a route to Istanbul does not feature in any of these airline’s respective networks.

By contrast, Sabiha Gökçen’s largest carrier in terms of weekly seats, Pegasus Airlines (60% share), is already operating in the Turkey-UK market, with 16 weekly flights to London Stansted, as well as six times weekly to London Gatwick. Given its experience in the market, making the jump onto this potential sector would not be an issue for the airline, particularly as it would also be able to leverage connecting traffic on its 90-destination strong network at the airport, including 31 cities in Turkey.

While Turkish Airlines is well represented with 34% share at Sabiha Gökçen, making it the airline’s second biggest operation, it has a more limited UK network from Sabiha Gökçen only flying daily to London Gatwick. Although smaller than Pegasus’ hub operation, the Star Alliance carrier’s 60-destination network (30 in Turkey) at the airport has grown rapidly over recent years, and could also provide invaluable two-way feed, especially for football fans looking to visit Old Trafford (Manchester United) or the Etihad Stadium (Manchester City) in Manchester, or indeed Galatasaray or Fenerbahçe in Istanbul.

Little or no traffic in the transfer market

When looking at the previous year of search data, the busiest month for potential traffic flows (for both directions on the route combined) is June 2016, with nearly 62,000, close to 42,000 higher than the lowest monthly figure, which was recorded in November 2015 (20,000). The seasonality profile of this search data is slightly more extreme than last week’s Unserved Route of the Week (Oslo to Shanghai), with the low-month traffic representing 32% of the highest month. According to OAG Traffic Analyser, because there is a high-frequency direct service between Atatürk-Manchester, there is very little connecting traffic from Sabiha Gökçen to Manchester.

As we stated earlier, this city pair is already served by a non-stop flight, but there is still more potential to extract traffic from the new airport pair. In this instance Skyscanner’s Travel Insight indicates a monthly average click-thru purchase rate of 4.5% for the Istanbul to Manchester route (see graph below). Therefore, if there was a Sabiha Gökçen to Manchester route, and if bookings performed in line with the “Skyscanner market average” for direct services at both airports (6.0%), the airline operating this route could still expect an improved purchase rate of 33%, without any increased marketing spend. However, with nearly 440,000 annual searches, the potential airport pair should already be very sustainable. 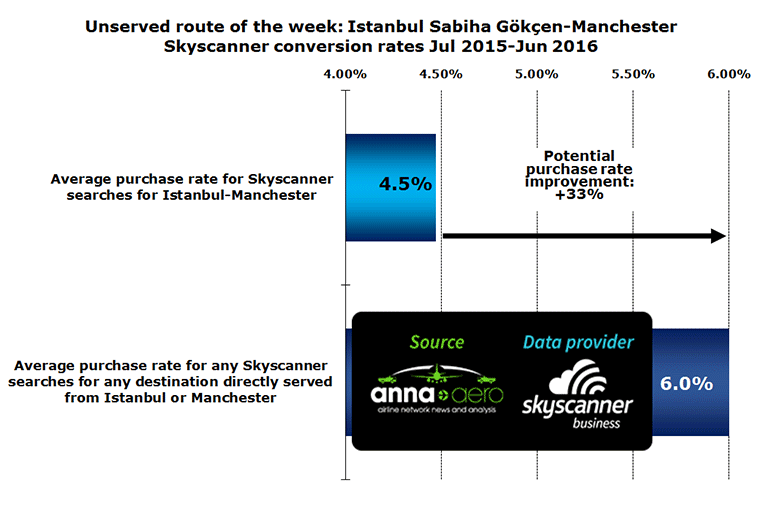 Methodology: How we analysed demand for the “other” Istanbul airport

In terms of the Skyscanner data, most potential passengers tend to search at city level – for example, flights leaving “Istanbul” rather than “Sabiha Gökçen Airport”. So it tends not to be relevant to filter the information for these more precise search criteria, as only a small part of the users who really want to fly to/from Istanbul to the destination may be captured. In terms of Sabiha Gökçen, 11% of Skyscanner users selected the airport as a departure point, with the remainder being split between the Istanbul city code (62%) and Atatürk Airport (27%). Flipping the route around to those searching from the UK end, 10% of Skyscanner users chose Sabiha Gökçen as destination, with 61% selecting the city and 29% for Atatürk. To calculate the first segment of our potential market, our data elves then applied this 10% rate to the total number of searches in the Istanbul-Manchester city pair (which was close to 1.3m) to determine those seeking Sabiha Gökçen- Manchester specifically.

However many of those passengers who hunted for a flight between the two cities – the 62% and 61% from each sector – may well select using Sabiha Gökçen to fly to/from Manchester if the route was available (our data elves elected to use a figure of 60%). A 40% share of this resulting figure has been arbitrarily used (it could be higher or lower, but this felt about right) and applied to calculate the second part of our potential market. By adding these two numbers together, the resulting market potential traffic for the route is 440,000, or 34% of the 1.3m total market. The 34% figure has then been applied to the monthly statistics which are used to generate the first graph. So that’s perfectly clear now right?