American Airlines fastest growing carrier at Columbus; 41% of traffic in first half of 2016 flown by Southwest Airlines; Frontier Airlines returns 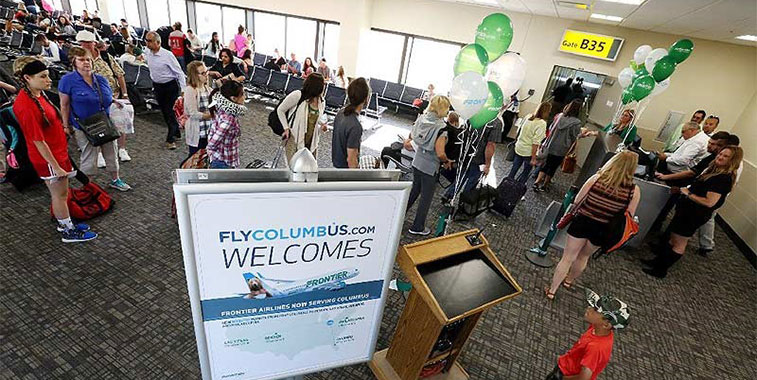 After an absence of 30 months, Frontier Airlines returned to Columbus in June, opening routes to Denver, Las Vegas, Orlando and Philadelphia. During its first month of operation the airline carried just under 22,000 passengers from Columbus.

Columbus is the largest city and the state capital of Ohio. For 2015 it is estimated that the city has a population of 850,000, making it the 15th largest city in the US based on population. Ahead of it in 14th place is Indianapolis (853,000) while in 16th place it’s the city of Fort Worth (833,000). Columbus is served by two airports – John Glenn Columbus and Rickenbacker. The former welcomed 6.76 million passengers last year, making it the larger of the city’s two airports. Rickenbacker, primarily a cargo airport, welcomed 166,251 passengers, with its only scheduled carrier being Allegiant Air.

Southwest Airlines was the largest carrier operating from Columbus in 2015, with the airline carrying just under 2.38 million passengers from the airport. Last year the airline was the carrier of choice for 35% of Columbus’ annual passengers. So far for 2016 the LCC has carried 40% of passengers that have travelled through the airport, with its own passenger count up 16% when compared to the same time period last year. However it is American Airlines, the third largest carrier in relation to passenger volumes from Columbus, which is performing the best when it comes to growth. It carried 43% more passengers in the first half of 2016 when compared to the same six-month period of 2015. Last year the oneworld member carried just over 900,000 passengers from the airport, representing over 13% of all traffic from Columbus in 2015. Elsewhere Delta Air Lines carried 1.56 million passengers (23% of all traffic in 2015), United Airlines 0.92 million (14%) and Air Canada 53,000 (0.8%).

June 2016 was a positive month for Columbus as it welcomed the return of Frontier Airlines, the airport’s sixth scheduled carrier. The airline returned to the airport after an absence of 30 months. It last served Columbus on 5 January 2014 with it operating a twice-weekly service from Trenton. On its return on 1 June, the airline launched daily flights to Denver and Las Vegas, while the following day it commenced a thrice-weekly service to Philadelphia. On 16 June it added flights to Orlando, giving it a grand total of four routes. During the carrier’s first month of operations from Columbus this year, the carrier flew just under 22,000 passengers, representing 0.7% of all passengers that have flown from the airport so far in 2016. 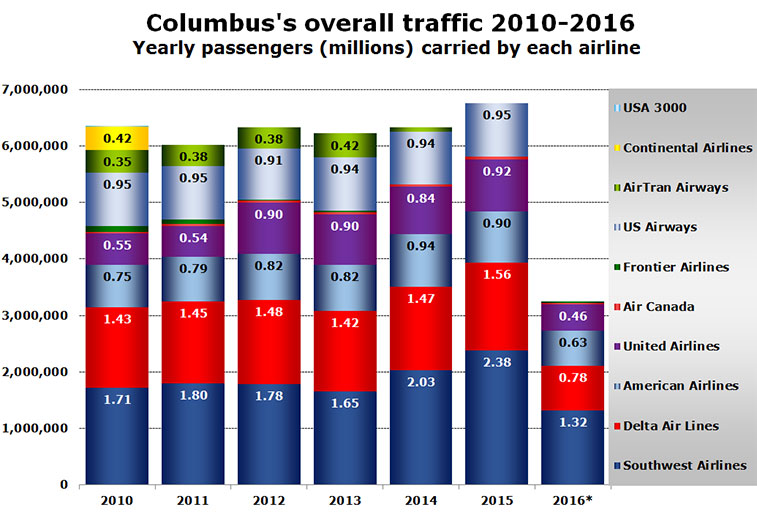 In relation to the first half of 2016, Columbus has welcomed 3.24 million passengers. Looking at the same six months of 2015, this 2016 traffic result represents a 0.4% drop in passengers. The reason for this fall is a result of the merger between US Airways and American, as all carriers are reporting rises in passenger traffic so far this year. When we combine January 2015 – June 2015 passenger statistics for both US Airways and American, the figure is just over 906,000. So far this year American has carried 627,000, therefore representing a drop in traffic of 31% post-merger.

Putting Columbus’ passenger statistics into anna.aero’s Seasonal Variation in Demand (SVID) calculator, the airport performs well, with it garnering a score of 1.13 – an “Excellent” rating – a result that sees it nestle in between Ahmedabad (1.12) and Long Beach (1.20), in terms of other airports which have had their seasonality analysed so far this year. For 2014 the airport scored 1.14, meaning that the seasonality of Columbus has remained constant. In comparison Rickenbacker for 2015 scored 7.41 – a “Good” rating.

After welcoming a 5.3% rise in seat capacity during the past 12 months, Atlanta remains the number one route at Columbus. The route, flown by Delta and Southwest, occupies just under 13% of all weekly seats from the airport this summer, the same capacity figure it generated in S15. Overall weekly seats from Columbus is up 6.8% in S16. In relation to Columbus’ top 12 routes, only one has witnessed a drop in capacity during the past year, with weekly seats to Baltimore/Washington (highlighted in light green) down 14.8%. 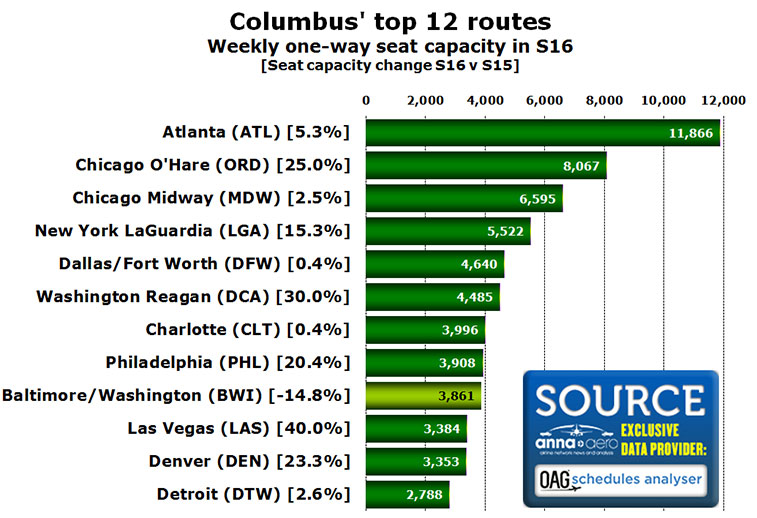 Columbus has 31 non-stop destinations this summer, one more than it had this time last year. Although Cancún was served by Delta last year, comparing OAG schedules between S16 and S15 indicates that the SkyTeam carrier is running a longer summer schedule to the Mexican resort this summer when compared to last year.

Toronto Pearson grows the most

Looking at the 31 destinations that are served non-stop from Columbus, the number one in relation to growth is Toronto Pearson (24th largest route). Weekly seat capacity on Columbus’ sole route to Canada has grown by 35% during the past 12 months, a result of Air Canada switching its 25 times weekly service from a 37-seat Q100 operation to a 50-seat CRJ 200. Air Canada carried 29,500 passengers between January and June this year, an increase of 15% when compared to the first half of 2015. As well as Pearson, a further eight routes have also witnessed double-digit growth in seat capacity during the past 12 months, namely: Chicago O’Hare (second largest route; 25% seat capacity growth); New York LaGuardia (fourth; 15%); Washington Reagan (sixth; 30%); Philadelphia (eighth; 20%); Las Vegas (10th; 40%); Denver (11th; 23%); Orlando (17th; 21%); and Raleigh-Durham (29th; 30%). Of Columbus’ 31 destinations, 11 have reported a decline in capacity. The one which has posted the most significant decline is New York JFK (23rd), a route which has seen its weekly seat capacity shrink by just under 19% when compared to last summer. 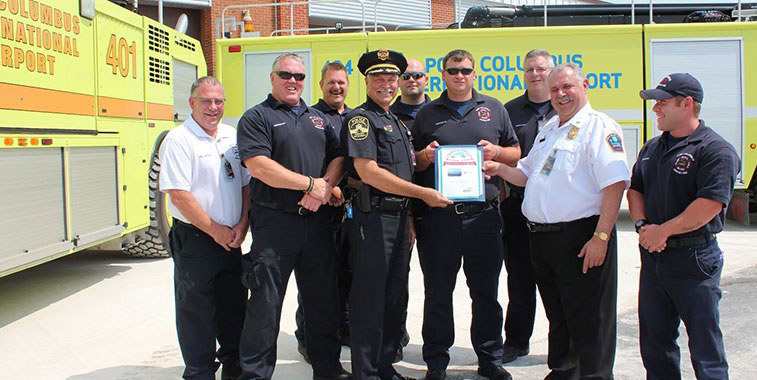 On 8 August last year Southwest Airlines inaugurated a new service between Columbus and Boston, with the Ohio airport producing a water arch so good that it won the anna.aero Arch of Triumph competition. Since last summer Boston has seen its weekly seat capacity be reduced by 5.7%. The route is also served by Delta Air Lines.