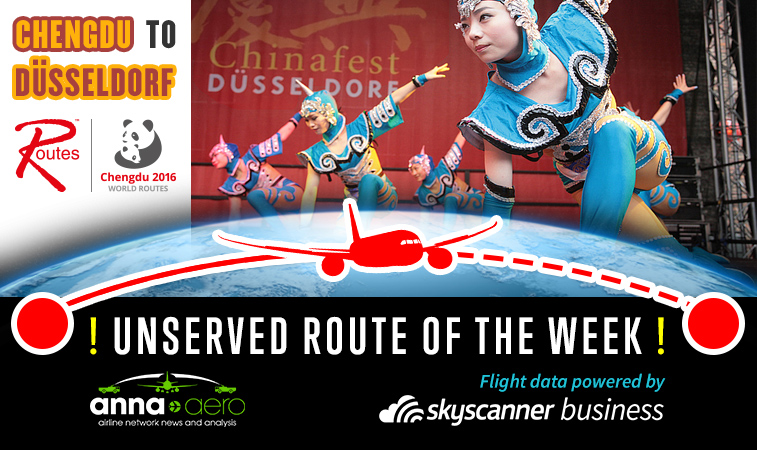 Düsseldorf’s Chinafest in September draws around 30,000 Chinese and German visitors to celebrate the deep cultural and business connections between this major city at the centre of the Rhine-Ruhr industrial region (pop. 11 million) which spearheads German industrial exports to China.

With 40,000 searches last year, a potential new route from Chengdu to Düsseldorf has been identified as this week’s “Skyscanner for Business-anna.aero Unserved Route of Week” – a powerful new kind of analysis based on aspirational data captured from the Skyscanner.net flight comparison site used by +50 million unique visitors per month. Chengdu is China’s fourth largest airport (behind Beijing, Shanghai Pudong and Guangzhou) handling over 42m passengers last year, and is next month’s host of World Routes. 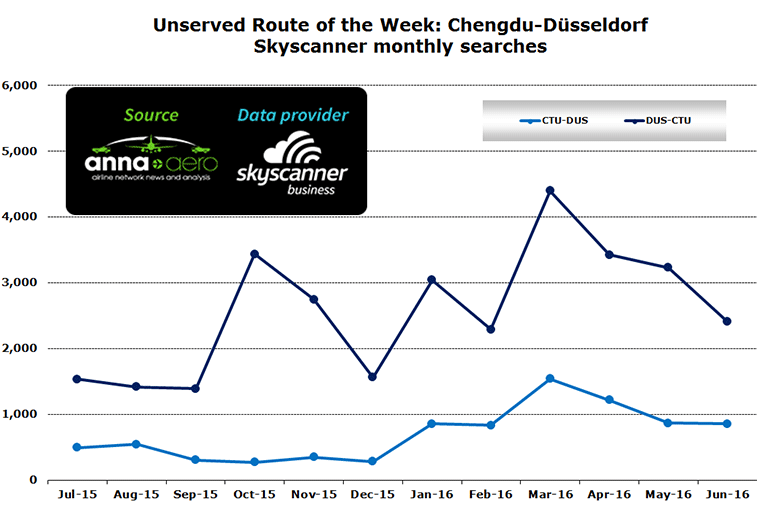 With the traffic on this route indicating a 79/21 split in favour of Düsseldorf, the potential carriers at the German end of the route were therefore considered first. The oneworld airline, airberlin, is currently the largest carrier (31% share) at Düsseldorf in terms of weekly capacity, according to OAG schedules data for the week commencing 30 August. While airberlin is also Germany’s second largest carrier (in terms of weekly seats), and does fly a range of long-haul services from its second biggest hub (behind Berlin Tegel) its current services are to the US (New York JFK, double-daily; Los Angeles and Miami, both daily; San Francisco, five times weekly; Boston and Southwest Florida, both four times weekly), the Caribbean and Mexico (Varadero and Punta Cana, both thrice-weekly; Cancún, Havana, Puerto Plata, all twice-weekly; and Curaçao, weekly) and the Middle East (Abu Dhabi, daily). However, airberlin does not currently operate to any destination in Asia from any of its German bases. On that basis it is perhaps unlikely that the carrier would consider a new route to Chengdu at this stage. The decision is also less likely given the carrier’s relationship with Etihad Airways, which will undoubtedly help satisfy its Asian and Chinese traffic requirements via its Abu Dhabi hub.

Düsseldorf’s second largest carrier based on weekly seats, Eurowings (16% share) offers long-haul services from nearby Cologne Bonn, but has no intercontinental services from Düsseldorf itself. Unlike airberlin however, it does fly into Asia, offering twice-weekly services to Bangkok Suvarnabhumi and Phuket, but anna.aero does not feel Eurowings would consider a new service to Chengdu at this point. The same can also be said of Düsseldorf’s #3, #4 and #5 largest carriers ‒ germanwings, Lufthansa and Condor ‒ given their respective fleets, business strategy, and existing network commitments at Düsseldorf.

Considering the Chinese end of the route, Air China (27% share) is presently the leading player at Chengdu, the Star Alliance carrier’s second biggest hub after Beijing. The airline also has existing European non-stop services from the airport – four times weekly flights to Paris CDG and thrice-weekly to Frankfurt ‒ and it will start flights (via Urumqi) to Rome Fiumicino in late-October this year. Surely a new route from Chengdu to Düsseldorf is a golden opportunity for Air China.

While Sichuan Airlines (second spot; 20% share) is expanding its long-haul network at Chengdu, including to Europe (it already serves Moscow Sheremetyevo and Prague), it is yet to venture into the German country market. It may consider a link to Germany’s third largest airport more attractive than competing directly against Air China at Frankfurt, or at the second busiest airport in Germany ‒ Munich ‒ which offers nearly 5,500 more weekly seats to China than currently available in Düsseldorf. The #3 and #4 carriers at the airport serving the capital of Sichuan province ‒ China Eastern Airlines (11%) and China Southern Airlines (10%) ‒ do not fly any services to Europe from Chengdu, so it is considered unlikely that either could become a potential solution provider to this vacant route problem in Germany.

When looking at the previous year of search data, the busiest month for potential traffic flows (for both directions on the route combined) is March 2016, with nearly 6,000 searches, over 4,000 higher than the lowest monthly figure, which was recorded in September 2015 (1,700). The seasonality profile of this search data is slightly more extreme than last week’s Unserved Route of the Week (Istanbul Sabiha Gökçen to Manchester), with the low-month traffic representing 29% of the highest month. According to OAG Traffic Analyser, because there is no direct service, the top three connecting options chosen by those passengers who did book travel between Chengdu and Düsseldorf in the past year indicates that the majority of connecting passengers use Amsterdam (26%), Beijing (24%) and Abu Dhabi (23%). In all, 15 different transfer airports were used by travellers to connect between the two cities.

An O&D that is not served by a non-stop flight will typically display a low purchase rate and low traffic. In this instance Skyscanner’s Travel Insight indicates a monthly average of 3.5% for the Chengdu to Düsseldorf route (see graph below). Therefore, if there was a Chengdu to Düsseldorf route, and if bookings performed in line with the “Skyscanner market average” for direct services at both airports (5.2%), the airline operating this route could immediately expect an improved purchase rate of 49%, without any increased marketing spend. However, with nearly 40,000 annual searches, the potential city pair should already be very sustainable at around a twice- or thrice-weekly frequency. 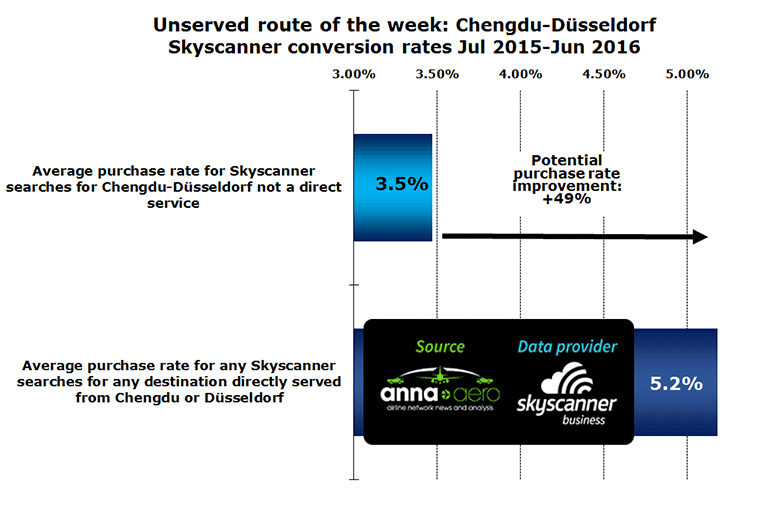