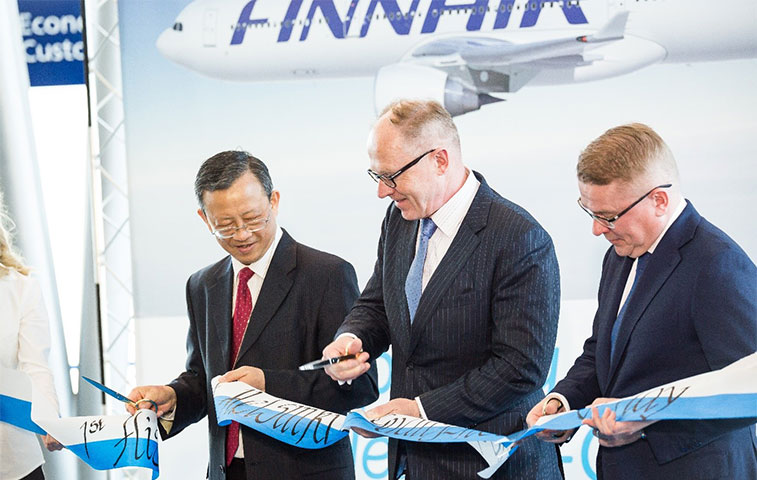 Yu Qingtai, Ambassador of the People’s Republic of China; Pekka Vauramo, CEO of Finnair; and Joni Sundelin, SVP, Director of Airport Networks, Sales and Marketing, Finavia, cut the ribbon at the inauguration of flights between Helsinki and Guangzhou in May. Guangzhou is one of 13 new airports on the oneworld member’s route map this summer.

Finnair is Finland’s national carrier and largest airline. In S16 the airline occupies 68% of monthly seats from Finland, with second-placed carrier Norwegian occupying just over 12%. The oneworld member is also not only the largest airline in Finland, but it also became the first in Europe to operate the A350. In October last year the airline welcomed its first of the type, and now it has a total of six. The airline currently operates the aircraft on its Asian sectors, namely Bangkok Suvarnabhumi, Beijing, Hong Kong, Seoul Incheon and Shanghai Pudong. This summer the airline is also utilising its newest aircraft on its London Heathrow and Brussels routes. It flies the aircraft into Heathrow on Mondays, Fridays and Sundays, while the Belgian capital sees the aircraft on Wednesdays and Thursdays. As well as the six A350s, the airline also has A319s (nine), A320s (10), A321s (13), A330-200s (eight), A340-300s (two), ATR 72s (11) and ERJ 190s (12) in its fleet. According to ch-aviation, the airline also has one SSJ 100 which is on lease from CityJet.

Between 2014 and 2015 Finnair’s scheduled traffic grew by 12%. Between 2013 and 2014 it grew by 8.1% and the year before that it rose by 6.8%. From 2011 to 2012 Finnair welcomed 9.4% more passengers while in 2011 it welcomed just over 16% extra passengers when compared to 2010. In total for the five-year period, the average year-on-year increase in scheduled passengers was a little under 11%. Overall since the turn of the decade Finnair has carried over 55.7 million scheduled customers. It should be noted that the reason for slumps in two months of 2010 – April and December – is due to issues outside of Finnair’s control (ash cloud!). 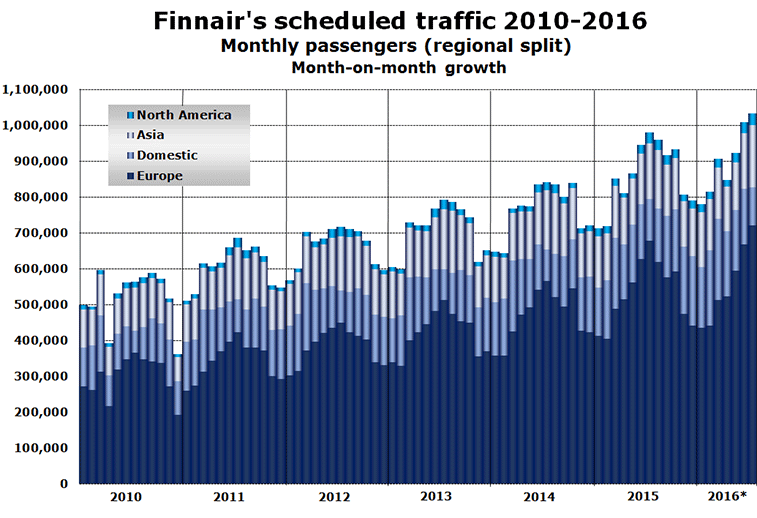 Traffic for the first half of 2016 up 7.3%; first month of one million passengers

Traffic figures for the first half of 2016 show that Finnair carried just over 6.3 million passengers, a growth in traffic of 7.6% when compared to the same period in 2015. This year has also seen the airline pass a significant traffic milestone, as it is the first time in which Finnair has surpassed one million passengers in a month. In June the oneworld member passed the one million scheduled passenger mark by just 8,000, representing a growth in traffic when compared to June 2015 of 6.7%. Not only was this feat achieved in June, but July saw the airline pass the one million mark again, carrying 1.03 million passengers, representing a month-on-month growth figure of 5.5%.

Looking into the regional breakdown of traffic it is North America which has welcomed the biggest increase in traffic, with passengers to the continent up by over 52% for the first six months of 2016. As well as North America, Europe – the airline’s biggest market – has seen a growth in passengers of 5.5%, while the domestic and Asian markets have seen both a surge in traffic of 26% respectively for the six-month period.

In relation to charter traffic it appears that in 2015 and 2014 Finnair did not carry charter traffic based on its traffic summary reports, meaning that its regular charter operations have ended. Some of its leisure market sectors having been converted to scheduled flights. In 2013 – the last year the airline carried charter traffic – Finnair carried 768,000 charter passengers, while in 2012 it handled 1.6 million. For 2011 it handled 738,000, while 2010 saw it welcome 887,400.

Helsinki (highlighted in blue) is home to just under 50% of Finnair’s monthly departing seats this summer, with the carrier’s home airport being nearly 2000% larger than second placed Oulu. During the past 12 months, Finnair has grown its seat capacity from the Finnish capital by 4.2%. 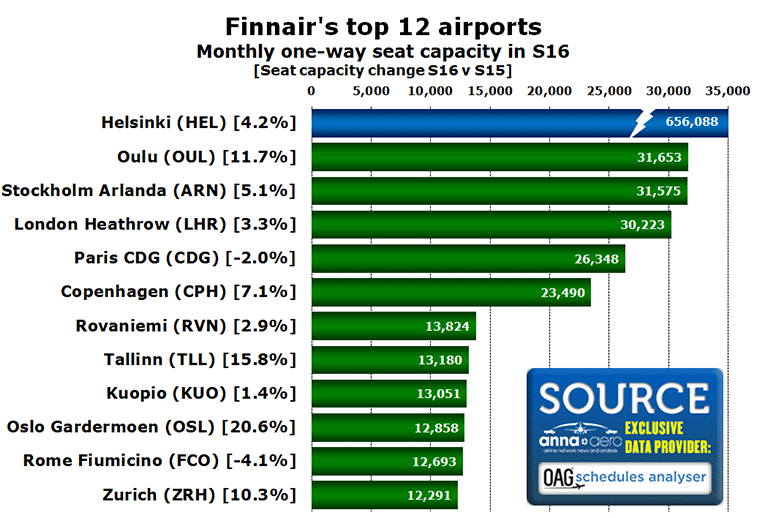 During the past year Finnair has launched flights from Helsinki to 13 destinations. Guangzhou, Miami (first time served in summer season), Fukuoka, Billund, Edinburgh, Preveza, Thira, Rimini, Pula, Skiathos, Zakinthos, Verona and Varna have all been launched by Finnair for S16.

All three long-haul markets in Finnair’s top 12 have welcomed double-digit growth during the past 12 months. China (32% growth in monthly seats), Japan (15%) and the US (43%) have all seen significant gains in seats during the past year. Outside of the top 12 the only other long-haul market to welcome a double-digit growth in seats is Thailand (25th largest market), which has seen its seat capacity grow by just under 12%. South Korea (24th) and India (32nd) are also reporting an increase in monthly seats, with the former’s capacity up 2.8% and the latter 6.8% respectively. Of the seven long-haul country markets which Finnair serves from its Helsinki hub two have reported falls in capacity, with Hong Kong (23rd) down 11% and Singapore (26th) 2.9%. 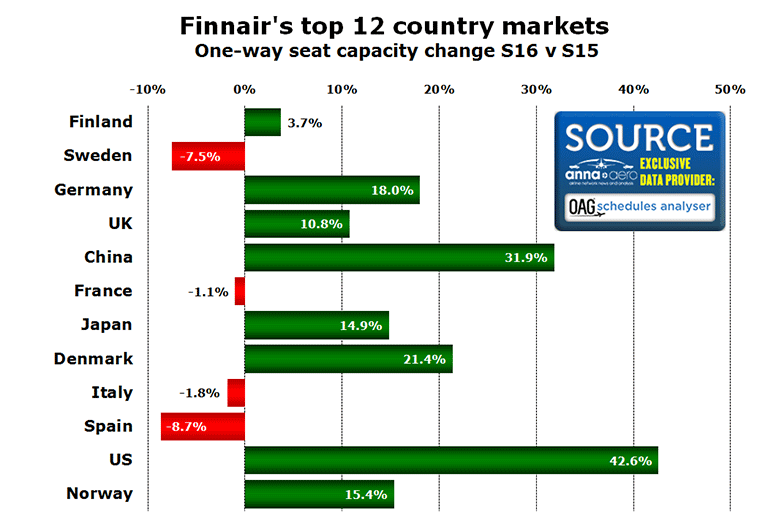 Only one market dropped; Iceland next

This summer Finnair serves 38 country markets, the same as it did last year. When analysing OAG schedules just one country market has been dropped from Finnair’s route map during the past year – Canada – with the airline ending the city pair of Helsinki to Toronto Pearson. The route ended on 18 October last year when referring to OAG schedules. The one market which has been added is Bulgaria, with Finnair offering a weekly service to Varna from Helsinki. Looking ahead to next summer, Finnair will gain another country market – Iceland – when it launches flights between the Finnish capital and Reykjavik/Keflavik, a route that will face direct competition from Icelandair. Flights will begin on 11 April 2017.

As well as Reykjavik/Keflavik, looking ahead to S17 it appears that Finnair is targeting leisure market destinations which comes as no surprise now that the airline does not offer regular charter flights. Alicante, Corfu, Ibiza and Menorca will all begin next summer. Apart from these destinations, the only other connection planned for 2017 is Kaunas in Lithuania, the carrier’s second destination in the Baltic country after Vilnius. 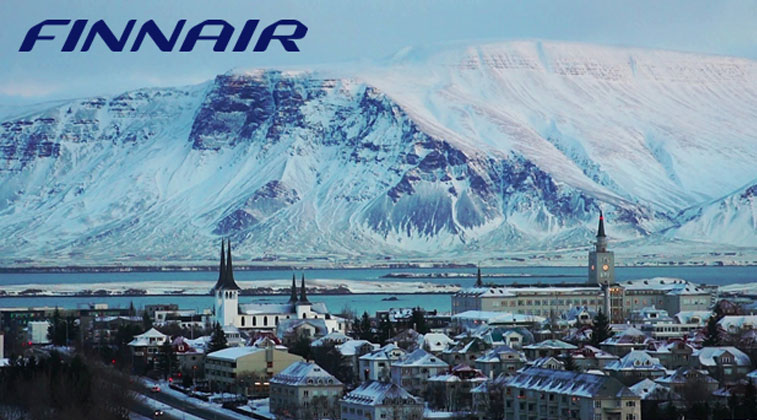 Looking ahead to S17, one of Finnair’s next destinations is Reykjavik/Keflavik. The link between Helsinki and Icelandic capital will face direct competition from Icelandair. As well as Reykjavik/Keflavik the airline will also add flights to Alicante, Corfu, Ibiza, Kaunas and Menorca for next summer.