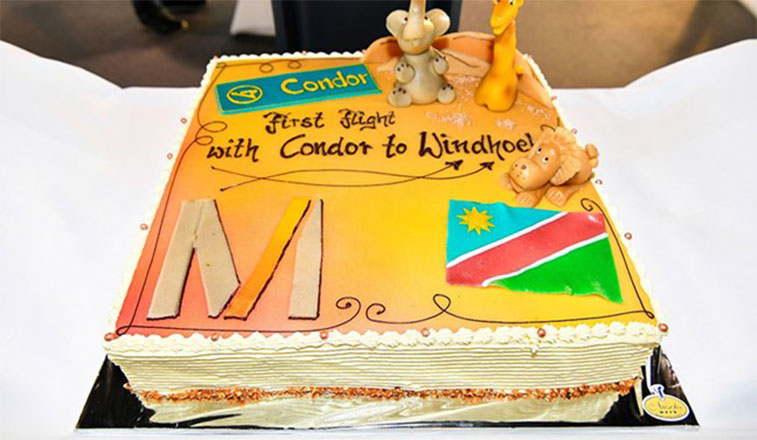 Condor launched services between Munich and Windhoek on 6 July, with the route inauguration being celebrated with this fantastic safari-themed cake. Since its launch, the city pair has become Namibia’s 11th largest route.

Namibia is a nation in southern Africa whose western border is the Atlantic Ocean. One of the more interesting facts about Namibia is that it is home to the world’s largest non-subglacial underground lake. The cave in which the lake lies is called Dragon’s Breath. It has been given this title due to the moist air that is seen rising from its entrance, giving the look of a dragon breathing from its home below the ground. As well as this piece of pub quiz trivia, another fact is that Namibia is home to around 2.1 million people, and the country this year is celebrating 26 years of independence from South Africa following the Namibian War of Independence that ended in 1990. A final piece of trivia from Namibia is that monthly seat capacity to the country is down 5.9% this summer when compared to last year looking at OAG schedules.

The connection between Windhoek and Johannesburg is Namibia’s largest route, the same position it had last year. Within the past 12 months the city pair has encountered a 14% decrease in monthly seats. In S16, the route is served by Air Namibia (21 weekly flights), South African Airways (21) and Comair (daily). Overall the sector between the two cities accounts for 40% of all monthly seat capacity from Namibia this summer. 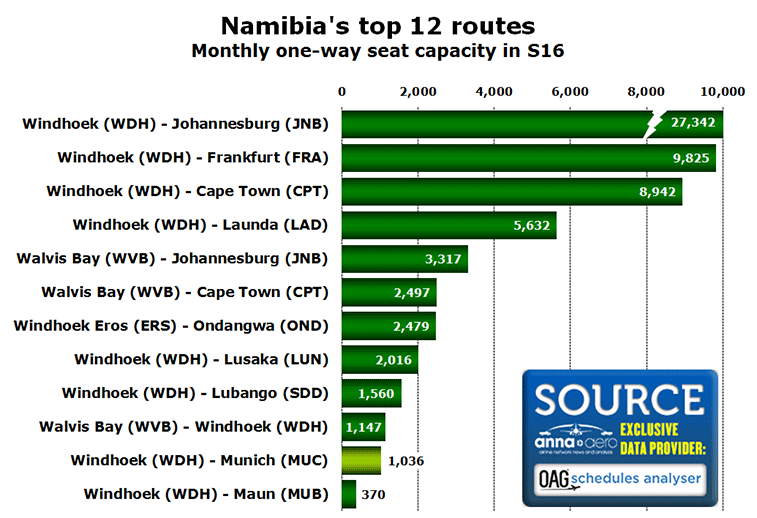 Highlighted in light green is the link between Windhoek and Munich, a route launched by Condor on 6 July. This is the only new route to Namibia that has launched during the past year. This is Condor’s second connection to Windhoek as it already serves the Namibian capital from Frankfurt. Its latest route accommodates 1.5% of monthly seat capacity this summer, while the link between Windhoek and Frankfurt, a route also served by Air Namibia, accounts for just over 14%.

In relation to existing routes, the one which has recorded the best growth amongst the top 12 is the link between Windhoek and Lusaka (eighth largest route). The connection between the Namibian and Zambian capitals has welcomed a 100% growth in capacity this summer, with Air Namibia increasing its frequency from twice-weekly to four times weekly. The only other route to have welcomed growth during the past 12 months is the link from Windhoek and Maun (12th). The Namibian-Botswanan city pair has welcomed an 11% spurt in monthly seats during the past 12 months. Of Namibia’s 19 routes which are in OAG schedules, only these two have welcomed growth, with the remaining 17 services seeing an average reduction in seats of 2.7%.

When consulting the OAG schedules, the only route from Namibia that is not operating this year when compared to last year is the link between Windhoek and Harare. The city pair in S15 was served by Air Namibia with a twice-weekly A319 operation. The service last year was the nation’s 11th largest, with the new Munich service taking its place. The connection between Windhoek and Harare occupied 1.4% of monthly seats from Namibia in S15.

Referring again to OAG schedules, only five airlines currently serve Namibia, with national carrier Air Namibia occupying 60% of all seats from the country this summer, down from the 61% it occupied in S15 despite the carrier offering the same amount of seats. Condor (highlighted in light green) is the only carrier to have witnessed growth to Namibia during the past 12 months, with its seat capacity up 41% as a direct result of its Munich to Windhoek launch. 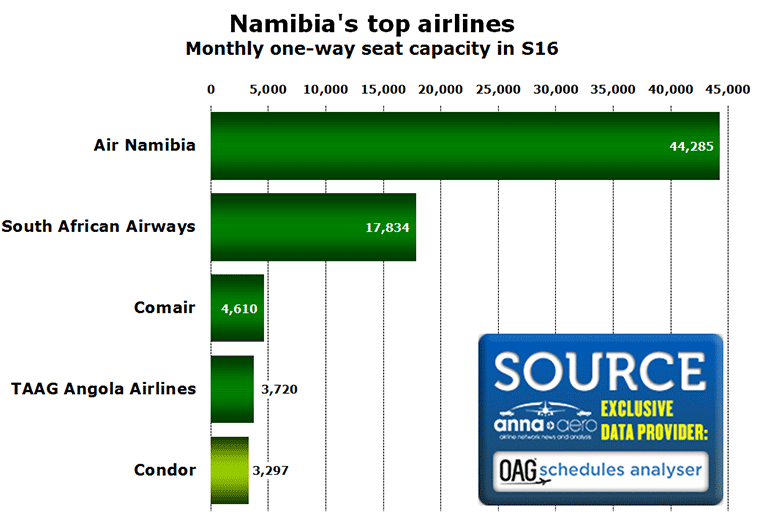 During the past year, one airline has left the market, with Namibia flyafrica.com no longer serving the country. The airline, which flew from Windhoek to Johannesburg and Cape Town, was forced to suspend operations as a result of the fact that it was wet-leasing a 737-500 from Zimbabwe flyafrica.com for its flights to South Africa. The Namibian Department of Civil Aviation suspended the carrier’s licence in November 2015 after an investigation showed it had failed to inform the department of Zimbabwe flyafrica.com’s AOC revocation while continuing to operate its aircraft. The suspended carrier was Namibia’s third largest airline last summer.

In relation to the nation’s remaining carriers, South African Airways has reduced capacity by 0.7%, with Comair down 5.1%. TAAG Angola Airlines is offering the same amount of seats this summer when compared to the same time period last year.

On 26 August Ethiopian Airlines announced its intention to serve Windhoek. The Star Alliance member, the second to serve Namibia after South African Airways, will commence flights to the capital on 4 October with an Addis Ababa – Gaborone – Windhoek route. Ethiopian Airlines CEO Tewolde Gebremariam said of the announcement: “As a Pan-African airline, it has always been our source of pride to connect Africa together and to the rest of the world. The addition of Windhoek to our ever expanding network brings our African destinations to 53, the largest coverage unrivaled by any other carrier. I believe, the commencement of this flight will surely give our customer more convenient option to travel to Namibia.” The route will be served thrice-weekly and looking at current schedules the aircraft will night-stop in the Namibian capital, despite arriving at 16:25, before returning the following day at 10:00.

As well as Ethiopian Airlines, KLM has announced its intention to serve Windhoek. The SkyTeam member, the only carrier from the group that will serve Namibia, will launch a thrice-weekly operation from Amsterdam on 30 October utilising its A330s. That week in W16/17 will be a busy one for Windhoek’s Hosea Kutako Airport, because on 28 September Qatar Airways will launch a four times weekly service from Doha. Looking at current schedules, this will be Namibia’s first 787-8 operation. 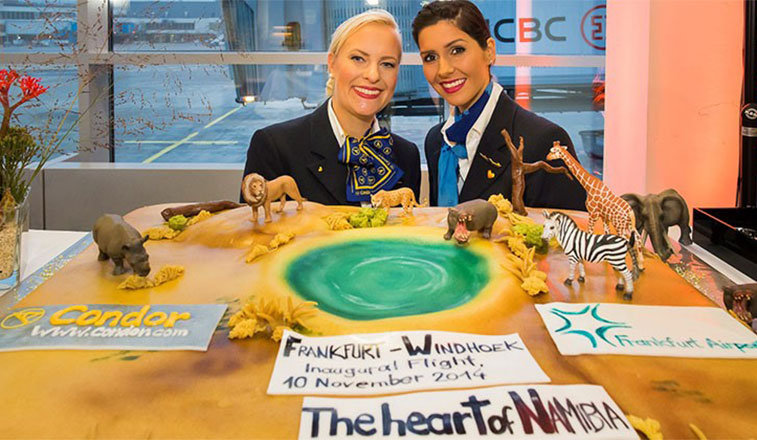 Before launching services from Munich this July, in November 2014 Condor launched flights between Frankfurt and Windhoek. During the past year the airline has achieved the title of being the African nation’s fastest growing carrier, with its monthly seat capacity up 41% when compared to last summer.