China Southern Airlines flew 45% of traffic between China and Australia in 2015; capacity between nations grows 30%; next stop Adelaide 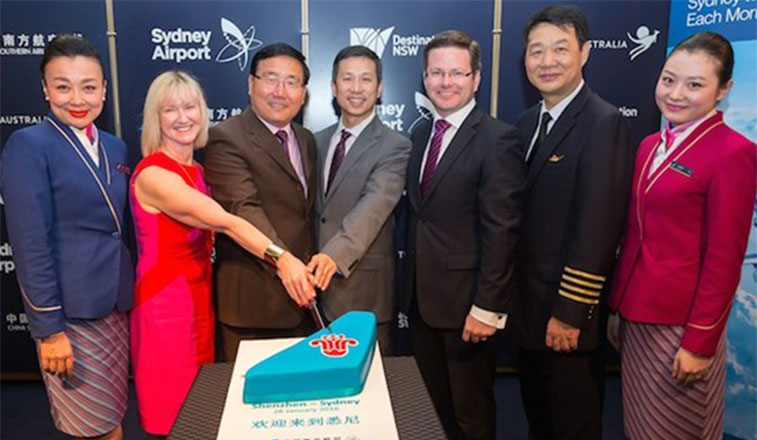 One of the last routes to launch between Australia and China was on 27 January, when China Southern Airlines launched its first route from Shenzhen to the Southern Hemisphere nation, a link to Sydney. The airline also serves the Australian city from Guangzhou. China Southern transported 45% of passengers in the market last year, with the airline becoming the first carrier to reach the milestone of carrying 100,000 monthly passengers.

The country market between Australia and China has welcomed a major boost during the past 12 months. One of the major reasons this country pair market has blossomed during that past year is that the two countries are actively engaged economically, cultural and politically. These factors span through numerous organisations including APEC (Asia-Pacific Economic Cooperation), the East Asia Summit and the G20. Today, China is Australia’s largest trading partner. One major factor that has pushed recent growth between these two nations is the signing of the China-Australia Free-Trade Agreement on 17 June 2015 by Australia’s Minister for Trade and Investment Andrew Robb, and the Chinese Commerce Minister, Gao Hucheng. There are substantial amounts of exports to China from Australia, namely iron ore, wool, and other raw materials. Over 120,000 Chinese students study in Australian schools and universities. Along with this, according to the 2011 Australian census, 318,969 Australians declared they were born in China, with 865,000 people identifying themselves as having Chinese ancestry, around 4% of the overall population. This means that VFR traffic is also substantial between the two countries. 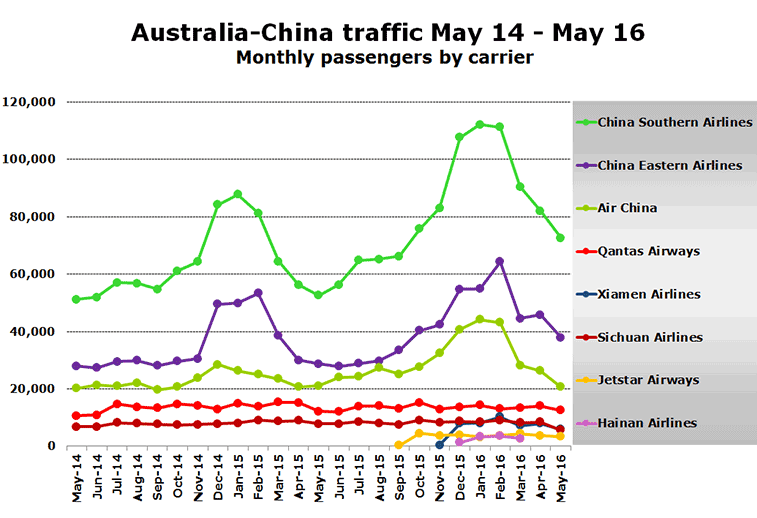 Between January and May 2016 (last published month of data), 1.05 million passengers travelled between the two nations, an increase of over 36% when compared to the same period of 2015. The best performing month for growth was April, when traffic rose by 44%. In 2016 China Southern is still maintaining its lead by flying 45% of traffic, followed by China Eastern 24% and Air China 16%. Qantas’ market share for 2016 so far is 6.5% while Sichuan Airlines is 3.8%, both of which are currently lower than the results they achieved in 2015. The three newest entrants to the market, Jetstar Airways, Xiamen Airlines and Hainan Airlines, are performing to the level expected of new entrants, with the former occupying 1.8% of traffic while the latter two have 3.8% and 0.9% respectively. It should also be noted that Hainan Airlines’ route between Xi’an and Sydney is currently operating on a seasonal basis, with the route expected to return later this year.

Currently China Southern operates five routes to Australia from China, four of which originate from Guangzhou (Brisbane, Melbourne, Perth and Sydney), while the other is from Shenzhen (Sydney), with the latter having launched on 27 January. In December of last year, the airline became the first carrier to reach the milestone of carrying 100,000 monthly passengers between China and Australia, with its surpassing the milestone figure by 7,711 passenger. The Skyteam member has gone on to achieve this feat in January and February 2016, also the high-point of summer in the Southern Hemisphere.

Shanghai to Sydney is number one

When referring to OAG schedules, the number one route is the same as last year, namely the airport pairing of Shanghai Pudong to Sydney. The route, which occupies a little over 17% of overall monthly seats between the two nations, is currently served by three carriers, namely China Eastern (eight weekly flights), Qantas (daily) and Air China (three). Capacity on the route itself has grown by 5.9% during the past 12 months. 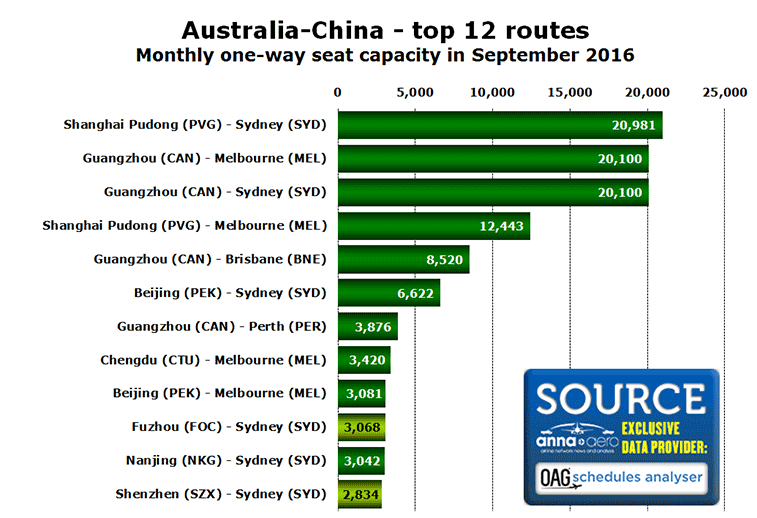 The route which has grown the most between Australia and China during the past 12 months is the connection between Beijing and Sydney, a city pairing which has welcomed a 33% increase in monthly seat capacity. The reason for this growth is due to Air China, the only carrier on the route, using the A330-300 this year compared to the A330-200 it used during 2015 on its five times weekly service. The route is also flown by the airline’s 777-300s when demand is higher throughout the year. The only other city pair to report a growth of +30% during the past 12 months is the link between Guangzhou and Melbourne, which has witnessed a 31% rise in seats. Highlighted in light green are two routes which did not operate last year, with both links overtaking the only existing route of last year which has been knocked out of the top 12 listing, the airport pairing of Chongqing and Sydney (14th largest route). The route itself, despite falling down the route rankings, has welcomed a 26% growth in seats during the past year.

Route count grows from five to 23 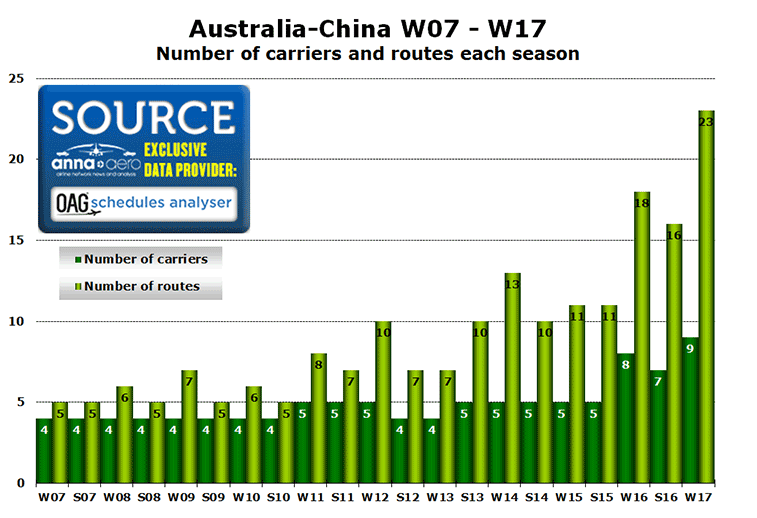 Of the airports in Australia that see flights from China, only Cairns receives a seasonal service during the winter months (summer in Australia). Since W09, China Southern has operated a small programme of flights to Guangzhou, with a regular thrice-weekly service launching in January 2013. China Eastern Airlines became the second carrier to serve Cairns when it launched a seasonal twice-weekly service from Shanghai Pudong in 2012.

Six new routes during the past 12 months

When referring to anna.aero’s New Route database, six unique city pairings have commenced between the two nations during the past year. This has helped grow monthly seat capacity between Australia and China by nearly 30%. The new routes are as follows:

The following routes have been announced and are expected to commence within the next few months:

The most significant route from the eight due to launch is the connection between Guangzhou and Adelaide, the Australian city’s first link to China. The 7,005-kilometre city pair will be flown on the Skyteam member’s A330-200s thrice-weekly. As well as this, the next few weeks will welcome the ninth airline to this country market, Beijing Capital Airlines. The carrier is also planning to operate its Shenyang-Qingdao-Melbourne route thrice-weekly on its A330s. As well as the latter two Chinese cities, Changsha and Kunming will welcome their first direct links to Australia this upcoming winter season. 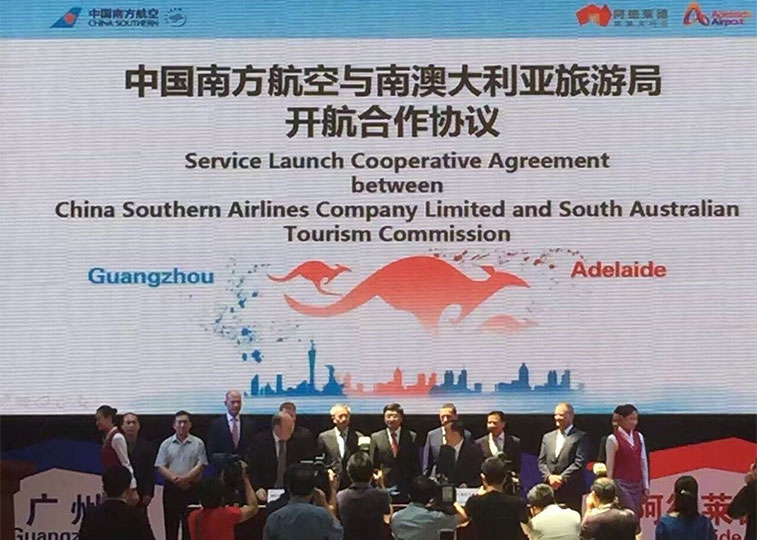 One of the next routes to launch between Australia and China is a 7,005-kilometre link from Guangzhou to Adelaide, a route that will be flown thrice-weekly. This new city pair is one of eight routes that will launch in this country market this upcoming winter season.